Half-Life: Alyx has finally arrived, marking Valve’s big return to their most famous game series as well as their first foray into the realms of VR. You can read more about wot Graham thinks of the game itself in his Half-Life: Alyx review, but here I thought I’d focus on Half-Life: Alyx’s VR performance chops, and in particular what kind of experience you can expect by sticking to the game’s minimum PC requirements. Can a GTX 1060 really deliver the Half-Life VR experience we’ve been waiting for? Let’s find out below.

Of course, testing a VR game’s performance can be a bit tricky. There’s no frame rate counter visible from inside a VR headset, for example, and much of your experience will depend on exactly which type of VR headset you have, as their respective displays all have different refresh rates. The Valve Index, for example, can currently go all the way up to 144Hz, while the Oculus Rift S is limited to 80Hz. The HTC Vive Cosmos headsets, on the other hand, can do up to 90Hz, and if you want to play Half-Life: Alyx on the Oculus Quest via Oculus’ Link software, then you’ll have to make do with a 72Hz refresh rate.

I’ll be doing a more thorough VR headset comparison later in the week, comparing how Half-Life: Alyx plays on the Valve Index, HTC Vive Cosmos, HTC Vive Cosmos Elite, Oculus Rift S and the Oculus Quest via Oculus Link, but right now I’m more concerned with how its raw performance compares across different graphics cards. Is a GTX 1060 powerful enough to deliver a smooth, vomit-free VR experience, for example? Or would you be better off upgrading your PC a bit further to really maximise your headset’s refresh rate? Here’s what I’ve discovered.

Half-Life: Alyx, on the other hand, needs a system that’s slightly more upmarket. Fortunately, it doesn’t need to be too bang up to date, as its minimum Nvidia GPU is still just the 6GB GTX 1060, which, according to Steam’s hardware charts has been the most popular graphics card for quite some time now, and its CPU requirements aren’t crazy modern either. As a result, anyone who has bought or built a PC in the last couple of years then you should be pretty set. The only thing that might throw a spanner in the works is its high RAM requirement.

To test Half-Life: Alyx, I used my trusty Intel Core i5-8600K CPU running at stock speeds, 16GB of RAM and my Asus GeForce GTX 1060 OC 9Gbps Edition (the same GTX 1060 I use for all my game performance tests) with all the latest Windows 10 updates, game updates and graphics card drivers installed. I also used the HTC Vive Cosmos for the purposes of this test, due to its higher refresh rate of 90Hz versus the Oculus Rift S’ 80Hz display.

Now, trying to find out what frame rate your VR headset is actually running at is a bit of a challenge. Your typical Steam overlay doesn’t work in VR, nor does Nvidia Shadowplay. Instead, I used SteamVR’s Display Performance Graph, which you can either enable to show on your desktop, or inside the headset itself if you go into SteamVR’s Developer menu. It doesn’t give you a running frame rate counter, unfortunately, but it does tell you its frame time, which is the speed it’s rendering the game at.

For the HTC Vive Cosmos, a 90Hz refresh rate equates to a frame time of around 11ms. If the headset’s frame time goes above this number, then it will be running slower than its 90Hz refresh rate. If it’s faster than 11ms (which shows up as lots of green squiggles below the central 11ms line), then you’ll be hitting that 90Hz refresh rate fine and dandy. However, the higher you turn up the graphics settings, the harder your PC’s going to have to work to hit that ideal frame time counter.

Now, Half-Life: Alyx has four graphics options: Low, Medium, High and Ultra. Here’s what they all look like in practice – or at least as close to ‘in practice’ as we can using SteamVR’s VR View option. 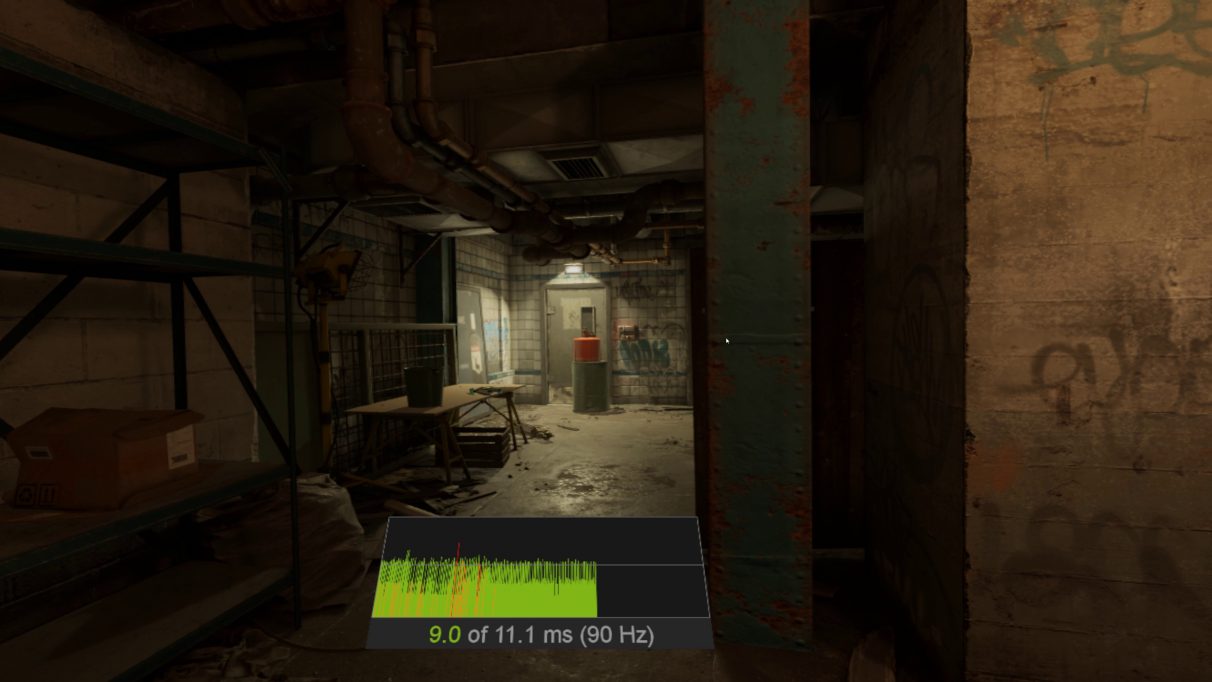 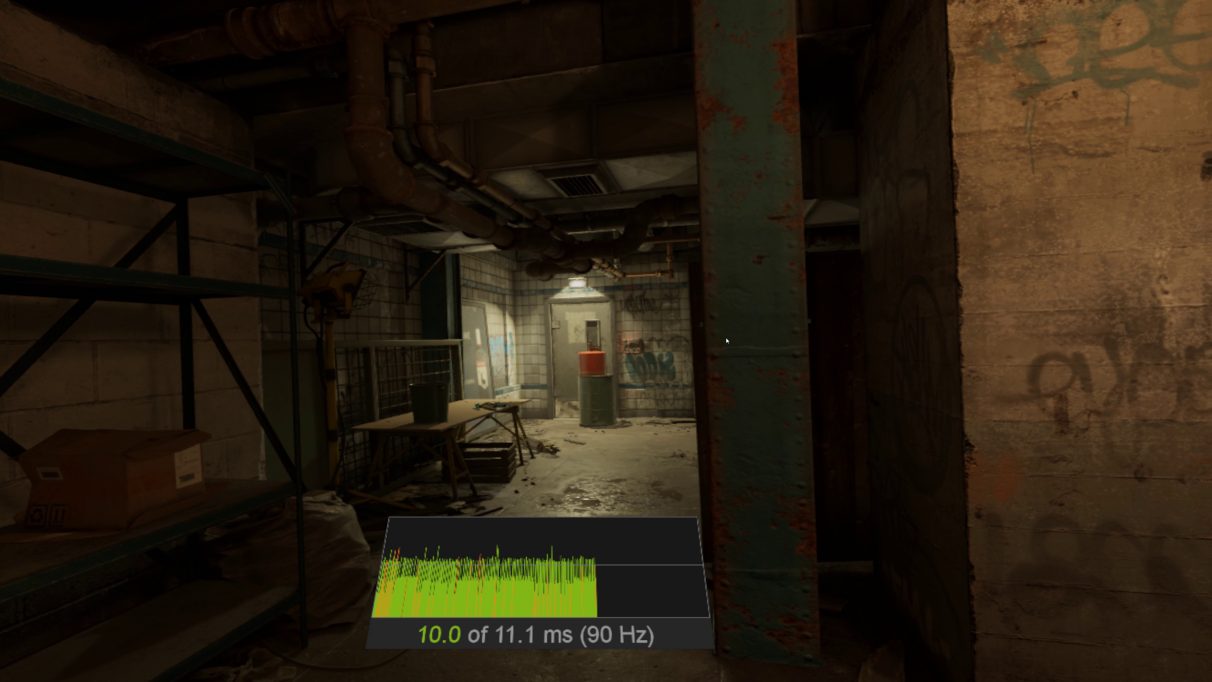 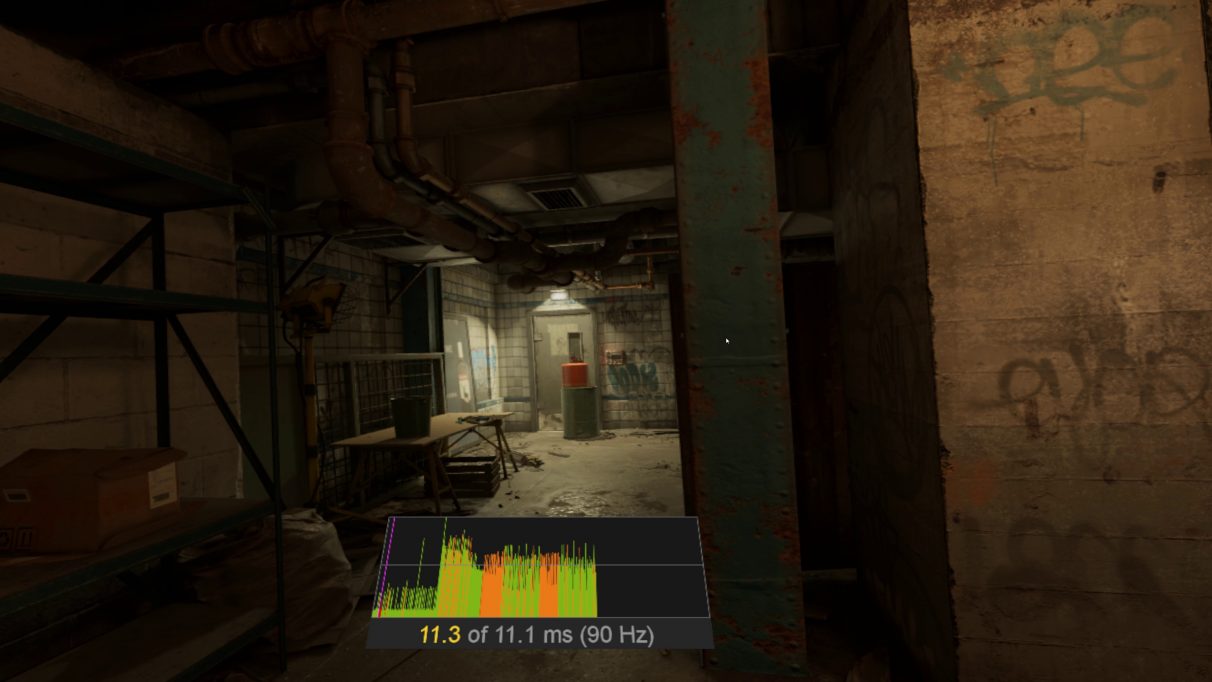 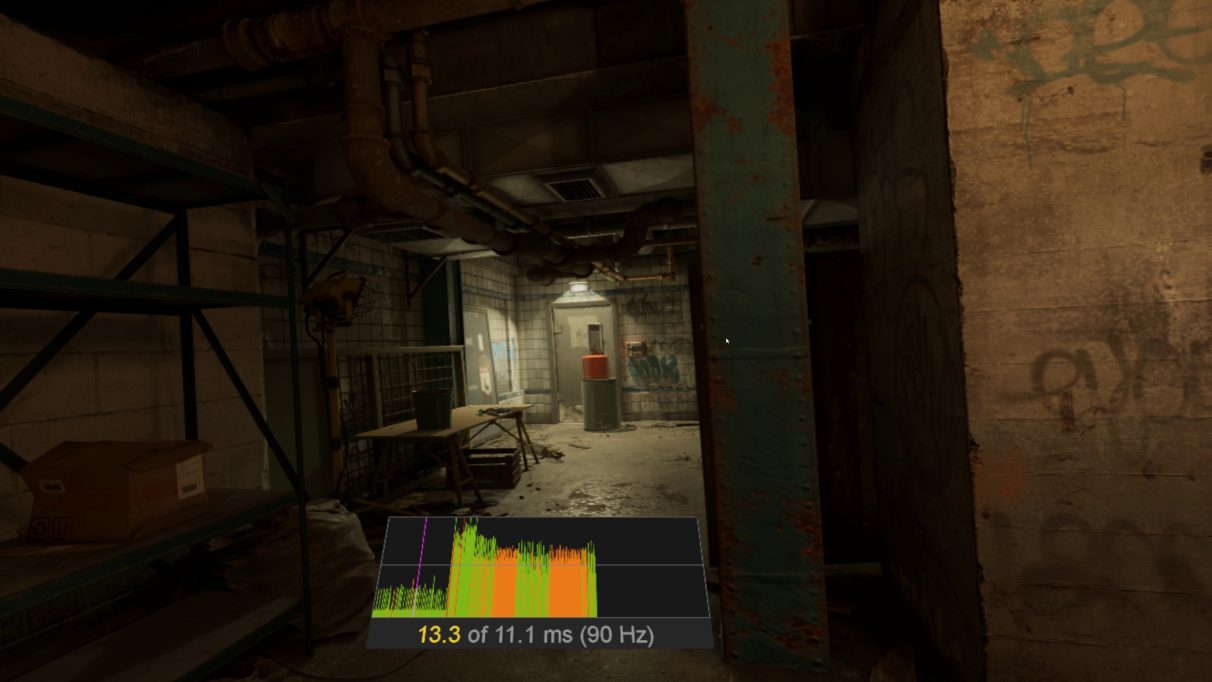 As you can probably see, there’s not a huge amount of difference between its four graphics options, and I didn’t really notice much of an uplift in visual fidelity in-game, either. That’s because all four quality settings have their Texture settings ramped up to High (even Ultra), ensuring a sense of visual parity regardless of what graphics card you’ve got in your PC. There is an extra Ultra texture setting you can enable by opening up the advanced performance settings menu, all told, but Ultra’s default option is set to High like everything else.

Instead, it’s things like shadows, character detail, fog, particle effects, audio detail and ragdoll count that differ between each quality setting. You know, atmospheric stuff. Low, for instance, has its Flickering Light, Soft Cloth and High Quality Hologram settings switched off (the rest have them all switched on), so Half-Life: Alyx probably won’t feel quite as spooky as a result – which may, in fact, be a boon if you don’t do well with horror.

Naturally, all these things take their toll on the headset’s frame time counter, and as I gradually moved through them all on my GTX 1060, the world started to become noticeably more juddery. Low and Medium were just about within the 11ms ball park, but High got noticeably choppier when I started looking around while moving. It wasn’t so bad that it made me feel nauseous, but I also wouldn’t recommend playing at this setting for long periods of time, either.

As a result, GTX 1060 owners will probably be fine if you stick with either Low or Medium when you’re playing on a Vive or Oculus Rift, but if you’re looking for maximum atmosphere, or are indeed playing on a Valve Index and want to make the most of its 120Hz and 144Hz refresh rate options, then you’re almost certainly going to need a more powerful graphics card.

Next, I tried my EVGA GeForce GTX 1070 Ti SC Gaming card, as I wanted to see how something more powerful in Nvidia’s older GTX 10-series family handled the game before I went full RTX. Here, Half-Life: Alyx defaulted to High quality settings when I booted up the game, and for the most part seemed it seemed relatively comfortable there. It was still a bit borderline, admittedly, often creeping up toward 14ms at its worst moments, but it definitely wasn’t as juddery as my GTX 1060 card. Ultra, however, is probably a bit much here, as even though it hovered around a similar frame time of between 13-14ms for most of my testing, camera movements became noticeably jerky even in relatively empty scenes.

As a result, those looking for the smoothest possible High / Ultra experience in Half-Life: Alyx should probably equip themselves with either an RTX 2070 or RTX 2070 Super (after all, the GTX 1070 Ti is roughly on par with Nvidia’s newer RTX 2060, so it stands to reason to go another step up the RTX ladder to get a more noticeable jump in performance).

When I booted up Half-Life: Alyx for the third time with my Nvidia GeForce RTX 2070 Super Founders Edition card, for example, it defaulted to High again, but had a much lower frame time of just 8ms. Indeed, you could probably bump it all the way up to Ultra if you wanted, as this only made my frame time counter rise to around 9ms. As a result, this is probably the type of graphics card you’re going to need to play Half-Life: Alyx on its best graphics settings, and definitely the kind of calibre card you’ll need to make the most of the Index’s higher refresh rates.

As I said above, I’ll be doing a more thorough headset comparison of Half-Life: Alyx in the coming days, so make sure you watch out for that as well. In the mean time, though, why not watch RPS Vid Bud Matthew play through the first couple of hours of the game (with additional commentary by yours truly)? Below, we’ve got the game running on an RTX 2080 Super and an Intel Core i7-8700K CPU, and we’re playing with the Valve Index. It’s a right hoot, I swear!

Tagged with feature, graphics cards, Hardware, how much graphics does it have, Valve, VR games, Half-Life: Alyx.