When I first played Some Distant Memory about a month ago, I would have said it was like a futuristic point and click version of Gone Home. In it, you play a mech’d-up archaeologist called Zal, who stumbles on an old house from before The Collapse, an apocalyptic event that sent the world into disarray and left only tiny pockets of humanity intact. During the course of its two-hour runtime, you poke around the house, discover old objects left behind by the family that lived there, and use them to reconstruct memories and events from them with the help of your AI robot pal Arora. It’s a sweet story, but it didn’t leave a particularly deep impression on me.

Fast forward to today, when the entire country has practically gone into lockdown, and it’s taken on quite a different meaning. If someone discovered my home 300 years from now, what conclusions would they draw from it? Would they marvel at the mountains of old graphics cards stuck in my office, or would they do a big yikes at the equally tall piles of empty Rennie packets we have strewn about the house? Maybe I should start leaving choice emails and text messages around the place now so that future archaeologists have some appropriate environmental storytelling devices to decipher what happened here…

I jest, of course, but it does get you thinking, doesn’t it? Indeed, there are moments in Some Distant Memory when I really did go, “How the hell did that get there?” (see the crocodile skeleton below), and there were a couple of retro gaming jokes that also made me smile and laugh a bit. At one point, for example, Zal finds an emerald ring in a desk drawer, and when she mentions it to her buddy Commander Ti up on the surface he replies, “Now that you’ve found one emerald, be on the lookout for six more!” (A Sonic gag, reader, if you’re unaware). He also mentions a legend about “seven yellow balls” at the same time , and it made me wonder exactly what, if anything, would pass into myth and legend like this. Would people in the future really start believing three golden triangles, for example? Or that mushrooms once made you double in size? Somehow I doubt it, but you never can tell, can you? 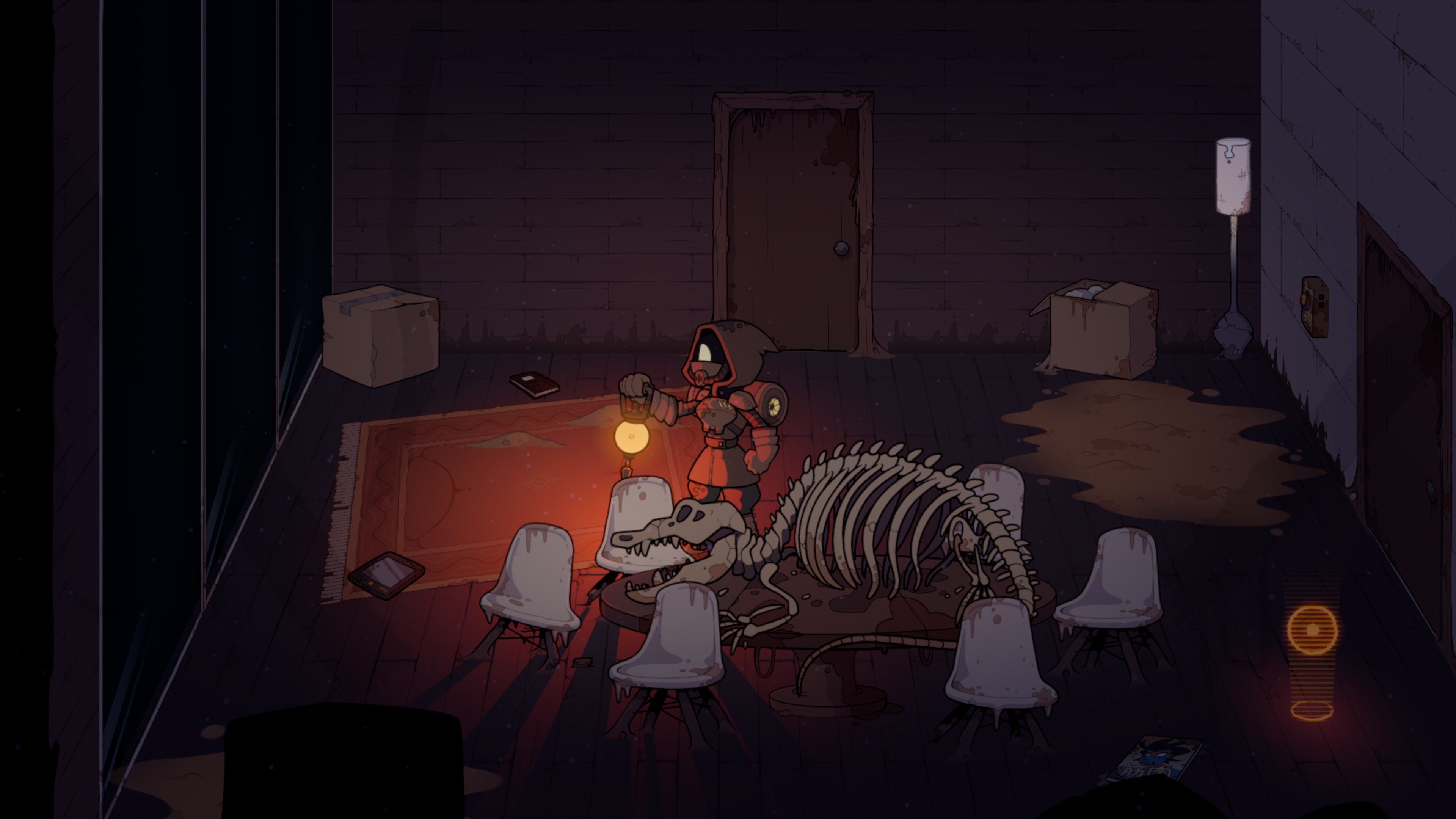 Now how did this get here?

Gaming quips aside, I did really like how Some Distant Memory structured its gentle trial of memory breadcrumbs. When you first stumble upon the house, for example, you’re fumbling around in complete darkness with only the light from your Arora lamp to guide you. It gives the house a very spooky, foreboding atmosphere, as if anything could lurch out of the darkness at any moment. Thankfully, Some Distant Memory is jump-scare free, but it does encourage you to pick over things slowly and take your time, as you work toward finding a power source. During this time, you gradually uncover the story of the family that once lived there – a boy whose mother isn’t around very much and his loving pair of grandparents who have been tasked with looking after him.

I won’t spoil the ins and outs of what happens, but when you finally reach the basement of the house and the lights come on, the next batch of memories you uncover are all from the boy as a grown-up as he picks through his family history and the things his grandparents left behind after they passed away. As he goes about setting up his own family home, the effect of finally being able to see the house for what it is emphasises how the boy himself is finally able to come to terms with the events of his childhood, like everything has finally been laid bare in stark, unrelenting detail.

There’s also a really lovely sequence towards the end of the game where his adult memories intersect with the hopes and dreams he had as a child, and I actually felt myself getting a little choked up as I watched the crushing defeat of reality play out against the wide-eyed optimism of his youth. That bit was really touching. The actual apocalypse then happening in their front room, less so. Those last few minutes of the game got increasingly grim as you try and find a way out of the house, but it did, at least, end on a rather more positive note by the time the end credits rolled.

I’d say it’s probably worth giving it a punt if you’re a particular fan of Gone Home and the like (you can pick it up on Steam), but maybe wait a bit until all these self-isolation measures get lifted, yeah? After all, those Rennie packets aren’t going to clear away themselves, are they?

Tagged with feature, Galvanic Games, Have You Played, Way Down Deep, Some Distant Memory.

More about Some Distant Memory