I had hoped to have some basic impressions ready last night, but that wasn’t possible, because whatever else I can say about this open world medieval(ish) combat RPG, it’s completely overshadowed by technical problems.

This isn’t a review, because to review it in this state would short change both its developers, Taleworlds, and everyone reading. Crucially, Bannerlord went into early access yesterday, not a final release. And every game ever made had at least something that needed fixing up. Some bugs or oversights or clunky bits are normal and acceptable. But even with those concessions, yeah, this is… this needs to be fixed. 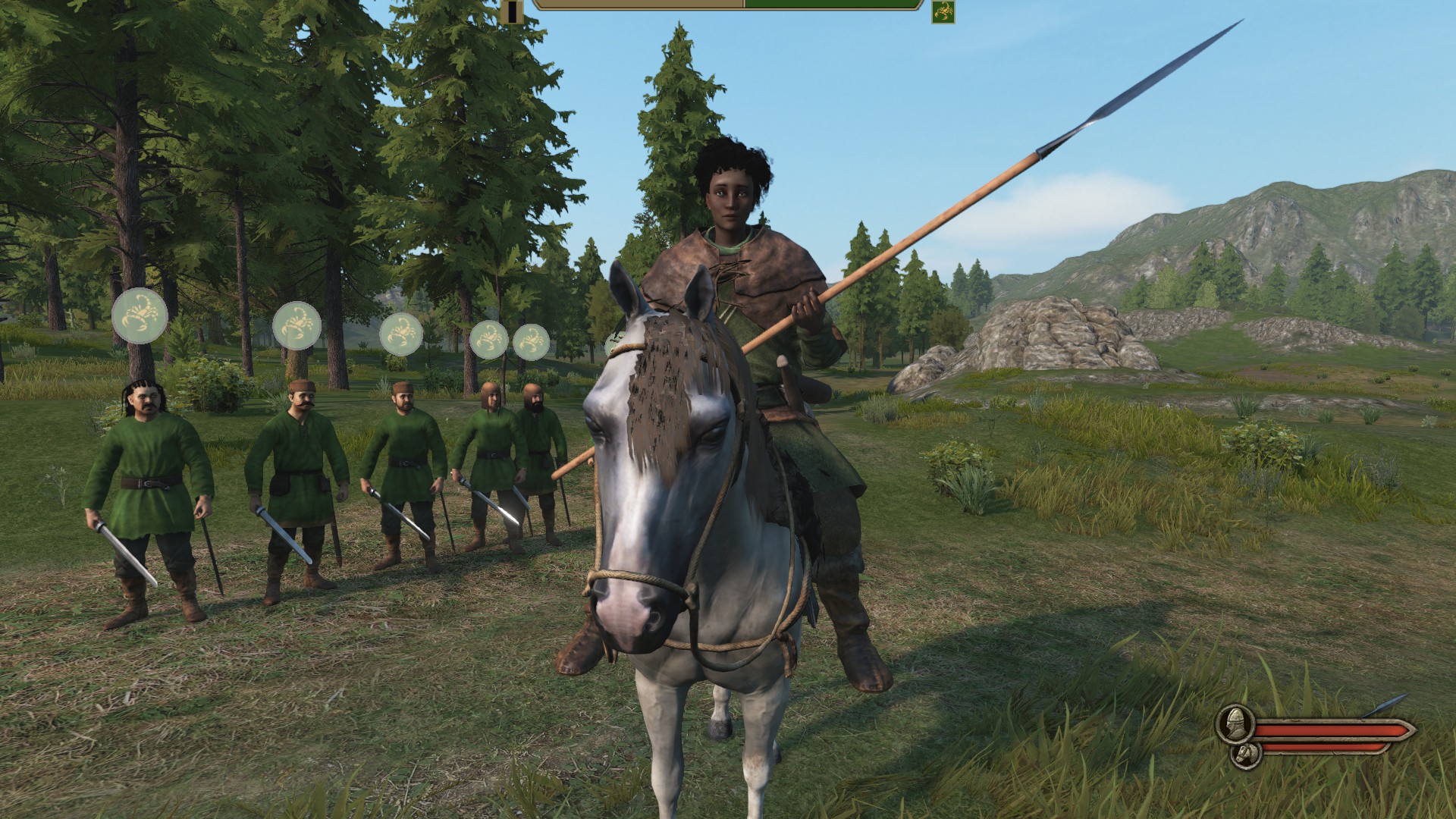 I’ve since upgraded to riding a mule. Yes, I meant “upgrade”.

What I can tell you upfront is I can already see glimpses of the sequel I was hoping for. The briliant, exciting, satisfying free-roaming manstab game with spears, javelins, proper good bows, and dodging to the side of a charging pillock to cut him deftly off his horse with a glaive. It might be in there. Bits of it certainly are. But most of my ‘play’ time has been spent waiting around for the bloody thing to load, and I’m not the only one.

It’s hard of course to get a reading on what proportion of players are having problems (and what are the sort to give their pet series 103% BEST GAME EVER within 12 seconds of buying it). But for all the instant thumbs up, there are already serious bugs, questionable design decisions, and some truly horrible optimisation. Taleworlds have a lot to do even before they can get to work on the estimated year or so of added content they have planned. 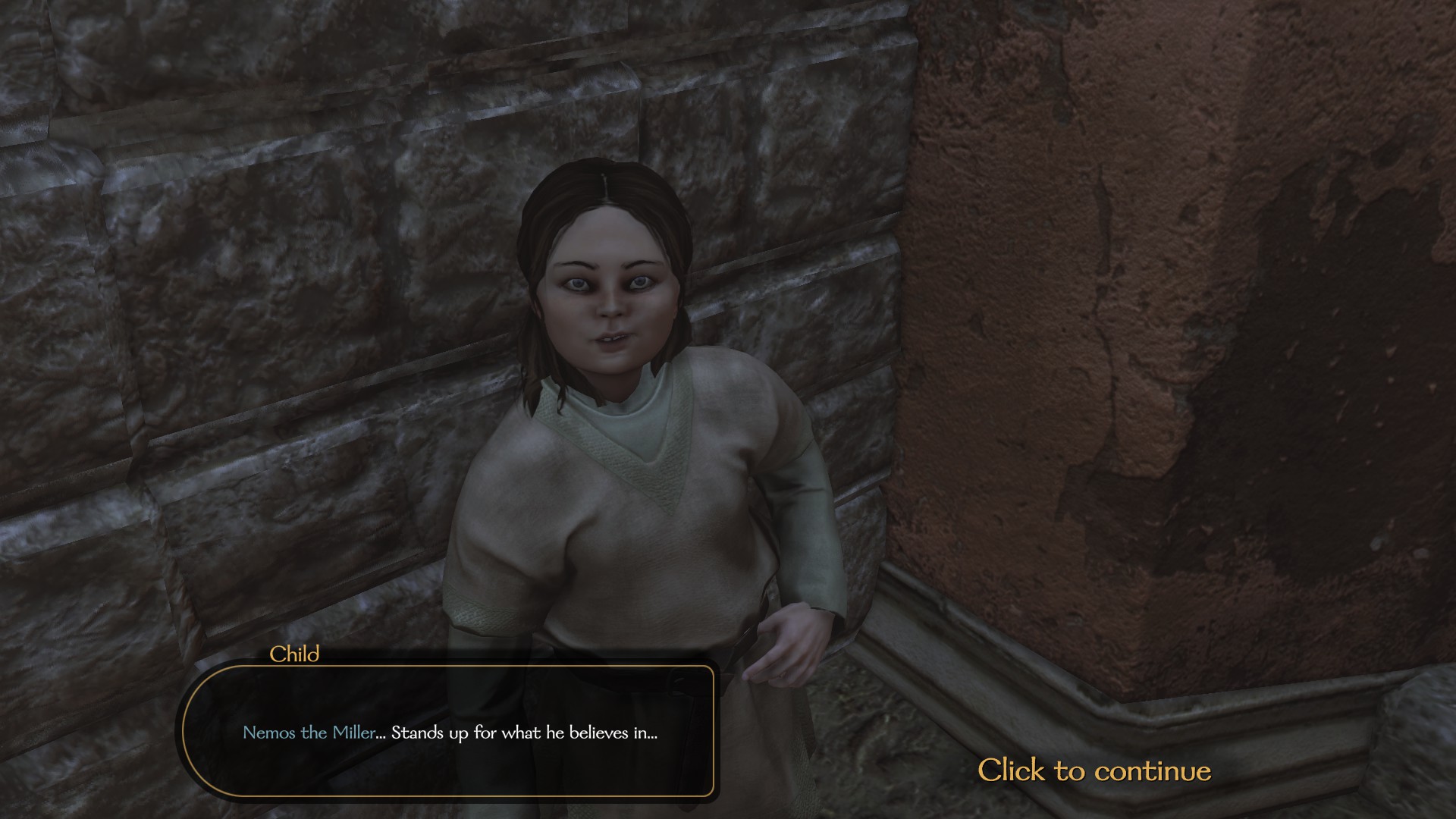 At the time of writing (stupidly late last night to you), the large majority of threads on the first page of the Taleworlds general discussion forum (separate to the technical help forum) are things like:

Players are reporting corrupted saves. There are crashes on startup, on loading a saved game, on parts of particular quests, on entering or leaving areas, on using menus. There’s stuttering (I had some, but playing around with graphics settings helped. Look out for Katharine’s advice on the technical side soon) and generally subpar performance. I’ve not had any crashes so far, but the loading times are terrible.

Taleworlds were quick to issue a couple of crash-crushing hotfixes throughout the day, and I’ve no doubt that work will continue. But for the time being, any progress I make in Bannerlord will be slow and tedious.

It starts out fine, but within an hour of play, loading screens begin to take anything up to two minutes. And they happen every time you enter or leave a settlement, start a fight, or talk to anyone. Which fans of the original will note is almost the entire game.

Compounding this is the early, mandatory story mission, the first leg of which ends with an option to duel a petty bandit leader who your villagers comfortably defeat. But between the tougher combat, a badly paced mission, and the total removal of the first game’s automatic blocking (literally the only combat difficulty feature I used in the original. Crosshairs? For a bow? Why would I do that), that leader is an absolute monster. You can’t choose your weapons or armour for this either (everything is locked during the tutorial but the next fight). But you can at least just have your men kill him instead. I strongly recommend this. Leave him Danny he aint worth it. 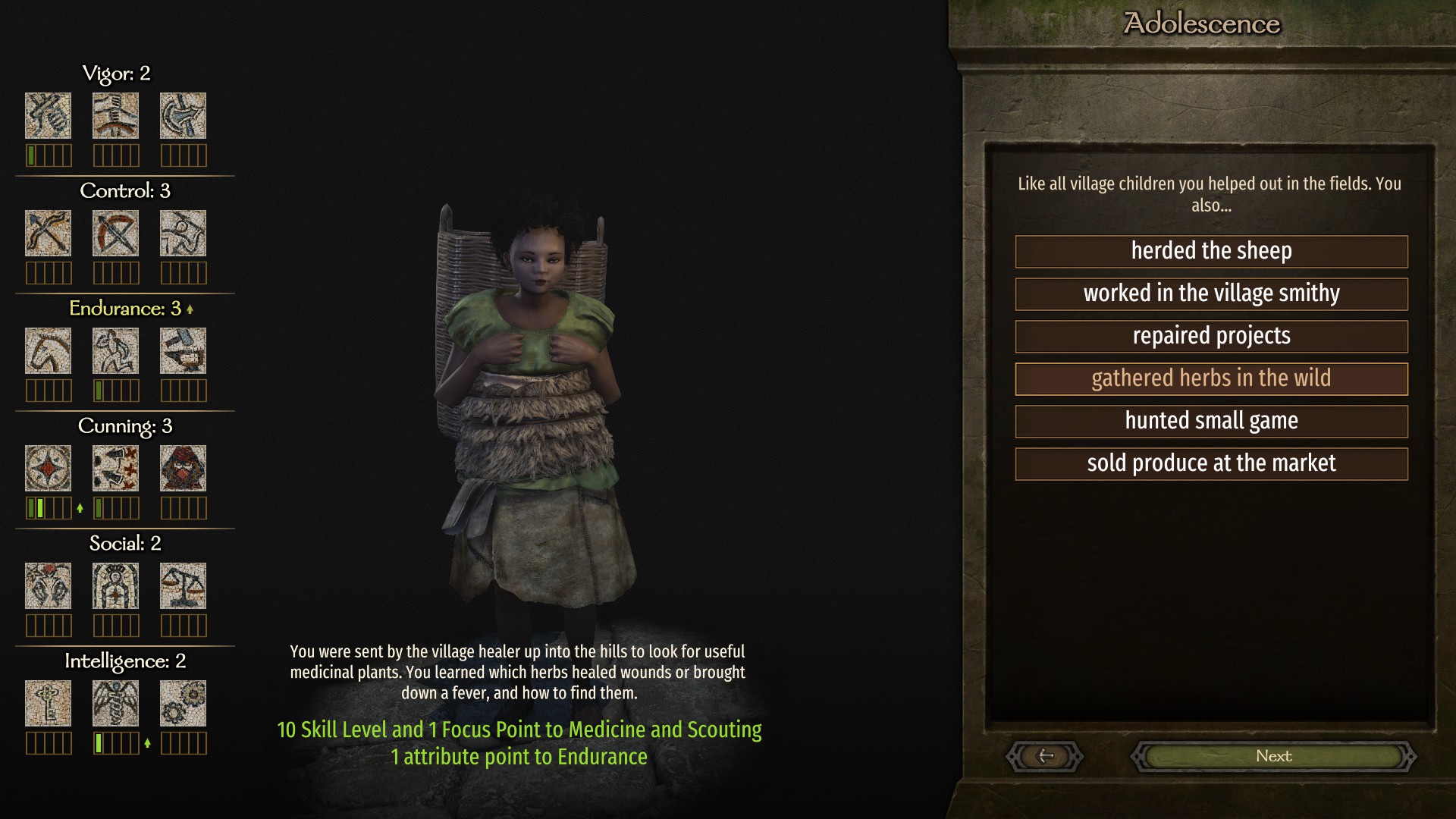 Choosing your face has sliders to make it more or less symmetrical. It’s a nice touch.

With this done, you’re freed from the straightjacket. But a starting player is hopelessly weak. To get any kind of basic force together (it’s that or be humiliatingly crushed by the rock-lobbing looters whose impossible dream is to one day sharpen a spoon) you have to schlep around from village to village, hoping to stumble across the right part of a town or castle to buy a decent weapon or armour (I ran into castles whose several merchants had no inventory at all). Recruitment is limited by your reputation with individuals and factions. That’s a promising idea but means you can only hire 1 or 2 peasants per town. Trudge trudge trudge.

That might not be fatal, but it turns the very long loading times into a near disaster. Want to check this town for merchants? Loading. Walked around town for long enough to find the tavern? Loading. Nobody useful in there? Loading. Found the merchant you need? Great! Oh but he doesn’t have the thing you need. L O A D I N G. 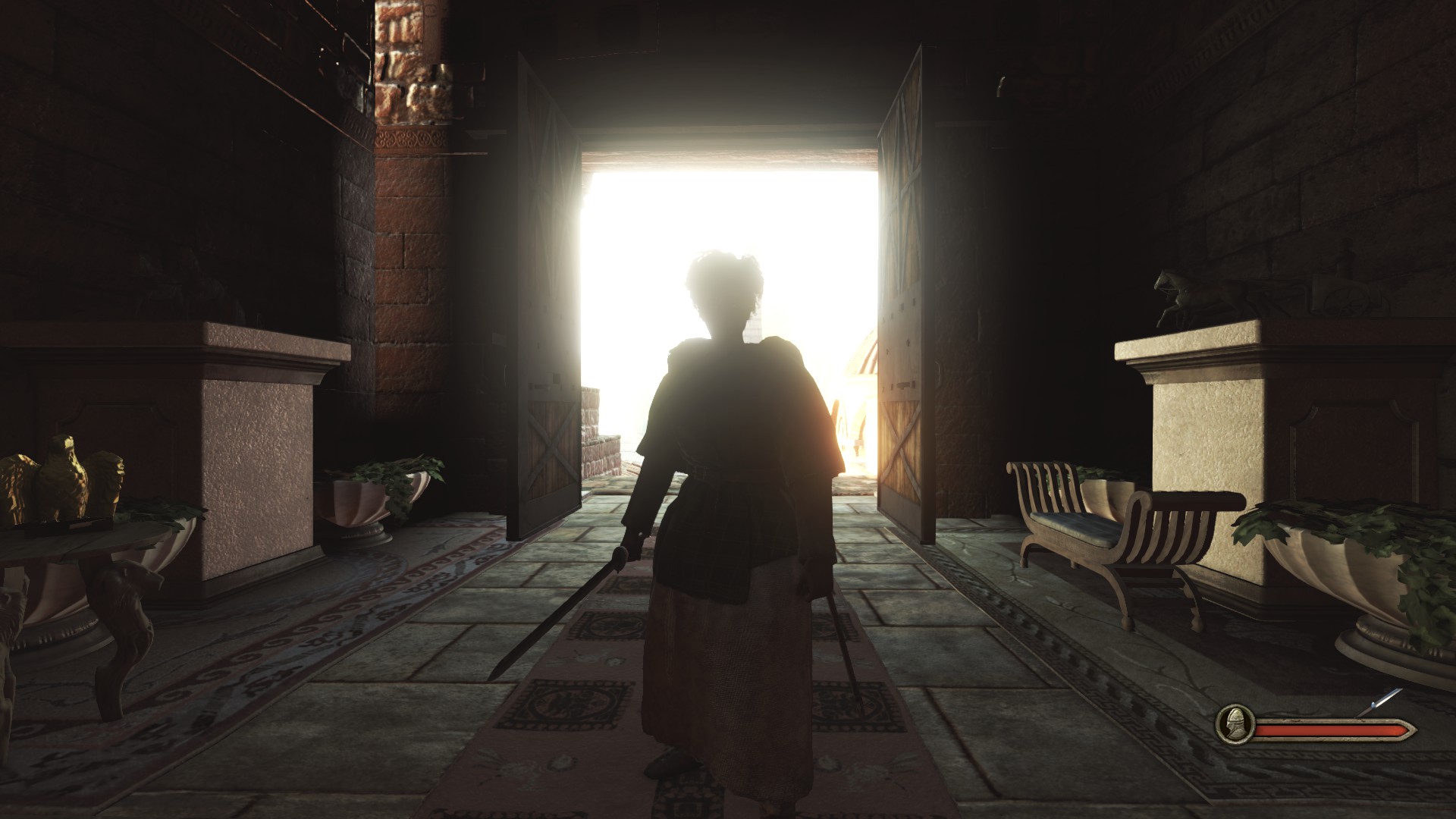 I’ve yet to see anything but a tiny fight. But it looks rather nice in parts.

A nice UI detail brings up a panel on the left when you visit a settlement. It describes the place, and lists your options. Ranged along the top are local NPCs. Clicking on these saves you the trip through town, which is a neat idea and the sort of trudge-proofing thing I loved the original for, but for some reason in Bannerlord, this still loads the whole town anyway. And that could take 10 seconds or 90. And then you talk to them and no, they have nothing to say, so you exit, and that’s another 30 seconds of loading. You’ve just spent two minutes doing something that should have taken seconds, or (Since this went up I’ve been told and confirmed that Bannerlord already does this, and I just got a bit unlucky with the places I visited)

At one point I shut the game down and it lingered on my PC for ten minutes, even after I tried to kill the process through task manager. The launcher remained whatever I did, eating a mere 2.5 gigs of RAM, but somehow snailing my entire PC to the point where I had to hard reset the whole system.

This was a messy, disappointing day for someone who adored the original game. 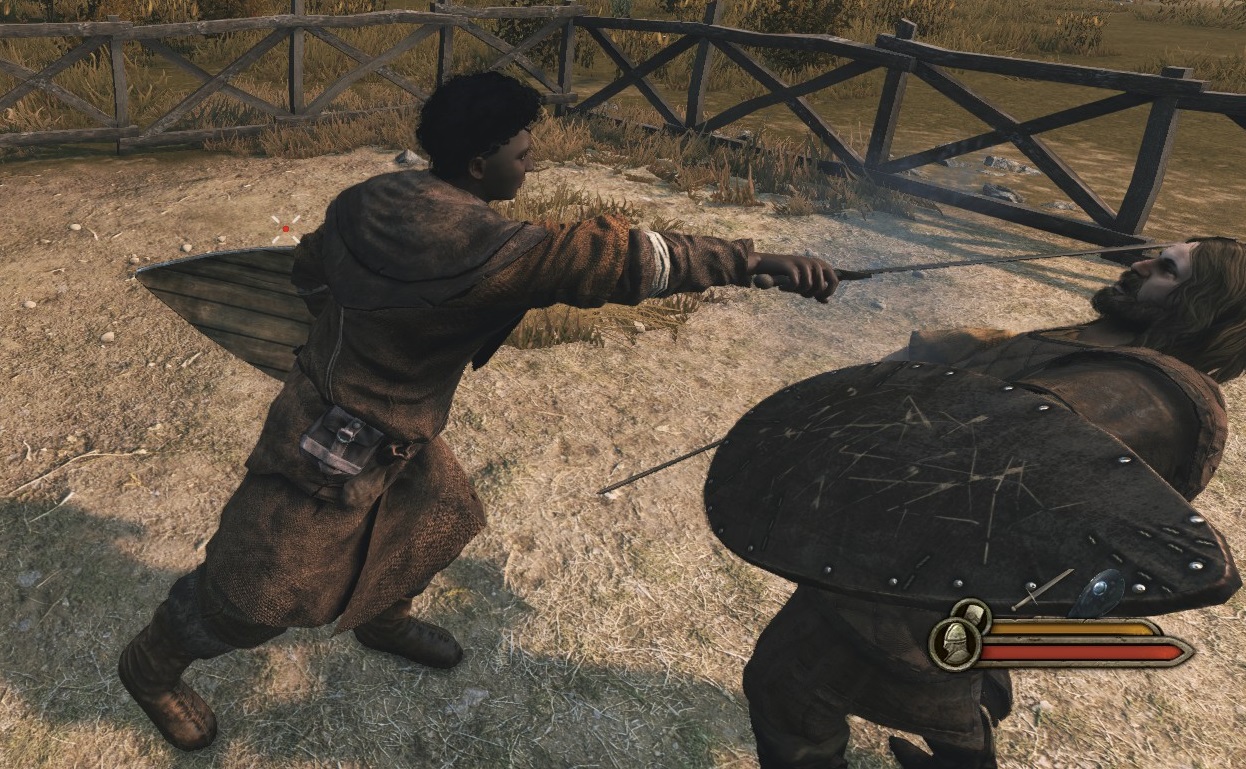 Skill advancement seems intriguing, but that’s all I can say, due to my linear perception of time.

All this can be fixed. I will be shocked (and if I’d paid for it, especially a massive £35 even with discounts compared to the stable early version of M&B I bought for £6 in 2006, I’d be fuming. But this is why we don’t preorder, kids!) if it isn’t. And in between grumping and sighing, I’ve seen a lot to like about Bannerlord. It’s very much the same sort of thing with all new everything, and improvements all over.

It’s the smaller things, mostly. When you get knocked down in a fight, it continues without you, and there’s even a free camera option to get a better angle. That will make a huge difference to some players/characters, and means that strong leaders with weak fighting skills (or just light armour) can still get stuck in.

All the factions are new. The setting is the same as the original’s, but set long earlier, with different empires and cultures, which are divided into distinct clans with their own bit of flavour and backstory rather than identical lords. I love that there’s a Celtic-influenced faction whose people sometimes look sort of Mediterranean. I mean, why not, right? Have some fun with it.

You can see market transactions carried out by NPC groups when you’re close to a settlement, making the map seem more alive and dynamic. Character creation is fun, as you choose what you did during your youth and whether to go for the bonuses you want or indulge in some roleplay. There’s more flavour in general, more character backgrounds, and more NPCs who have things to say, even if it’s often thinly disguised “you can buy cheap leather here” bits. Named characters include merchants, artisans, and gang leaders, and one cute feature lets you ask randos in the street where a named person is. They’ll then physically lead you to that person’s location (and they surely, surely will extend this to traders at some point) 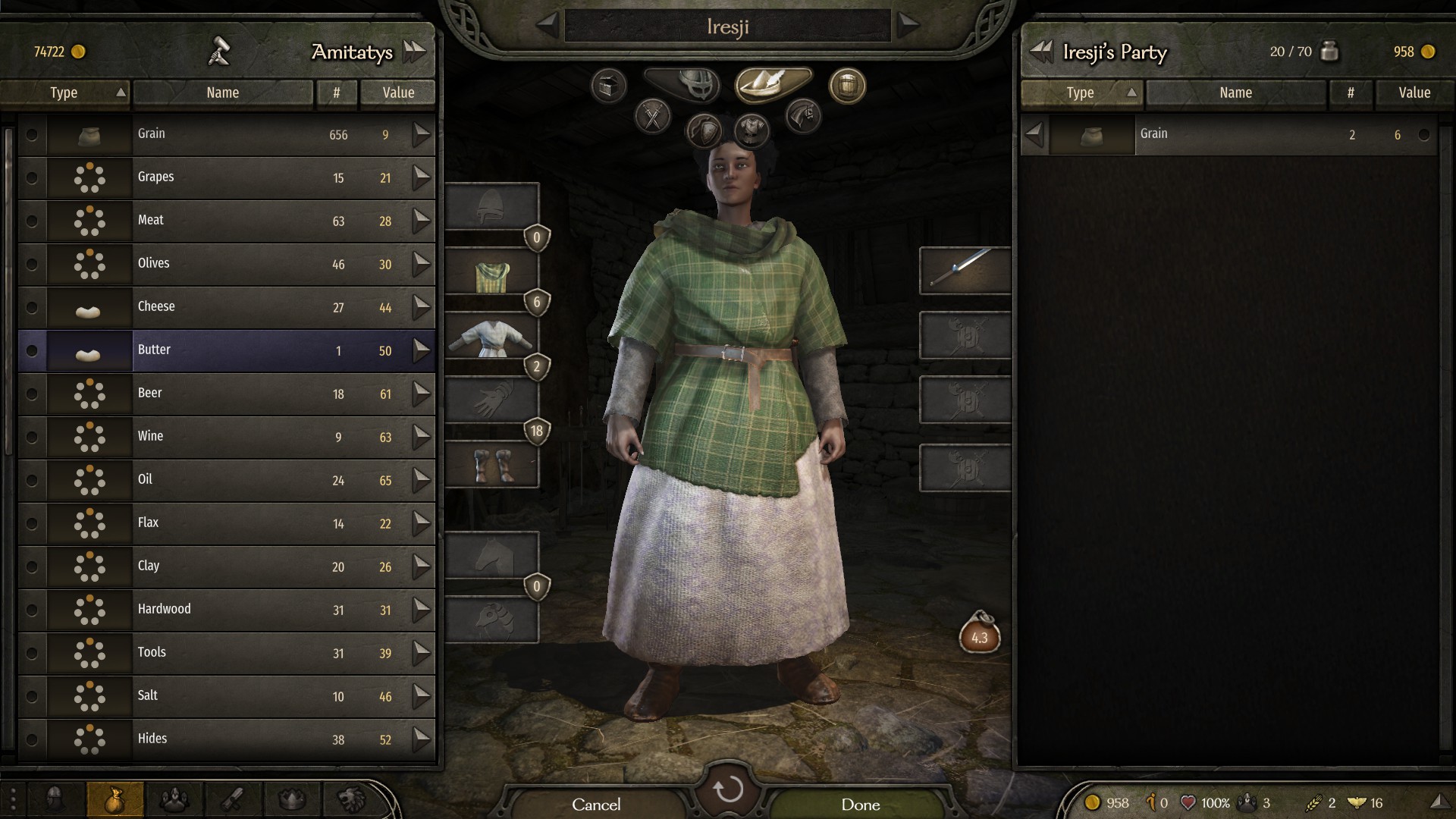 The loading icons in the left column demonstrate the constant delays even just checking certain menus.

I really wanted to declare last night whether or not the combat was as good as I’d hoped – had it not been, I would simply not see any point in playing. I’m frustrated to not yet have an answer, simply because in several hours of play I’ve yet to have a single real fight. But from what I have played, AI is a bit more situationally aware, especially in a free for all like the arena. People will turn to face new threats, and sometimes someone attacking me would hang back while someone else jumped me from behind. Some attackers are noticeably more aggressive or keen to rush you, which is a Good Thing. I like the way the enemies fall down, and get buffeted around by groups. I love that you can pick up and re-use individual javelins and throwing axes, and you can even retrieve and reuse them from the bodies of pigs that you attacked for reasons. Movement speed could really do with bumping up.

I’m personally not keen on the addition of a “main quest”, but it’s there, and a probably sensible concession to players who like to be given more direction. The early story is nicely humble, a “help your brother rescue your family” story rather than “BE A BADASS”. I am unbothered about having my own banner (and hope it becomes possible to divorce your banner colours from how clothes are dyed. Pink on pink? not on MY battlefield) but amused by the idea that you can fake being of noble birth just by making up a pretend name and flag and saying you’re foreign.

It all feels so close, you know? I can almost play it. But right now it’s got a long way to go.

We’ve asked Taleworlds for a comment on any plans they have for patching. Believe me, we have many eyes on this one and we want to know as much as you do.