The Asus ROG Zephryus Duo is unlike any other gaming laptop I’ve ever seen. It’s one of the first wave of dual-screen gaming laptops coming out over the course of this year, and it’s both baffling and beautiful in equal measure. It’s beautiful because the engineering on its secondary 14.1in display is just so damn gorgeous. Seriously, I made a GIF of its sturdy, rock solid hinge and everything and it still gets my heart racing even now, three weeks after I got to see an early sample of it in the flesh.

The thing is, though, who in their right mind is going to spend £3000 on this Intel 10th Gen Comet Lake / Nvidia RTX 2080 Super laptop when it launches this July just to get its fancy second screen? It all depends on whether Asus can make good on their promise to get some of today’s top developers on the case to make special custom game features for it.

When I first saw the Zephyrus Duo back in March, Asus were naturally keeping the exact details of which developers they were working with on the Zephyrus Duo pretty close to their chest. They said they’d let the developers announce their respective creations in due course, but given the laptop is currently due to launch in July (coronavirus-related delays nonwithstanding), it probably won’t be long before we start seeing some proper announcements coming through.

Either way, you can probably guess what that second screen (dubbed the ROG Screenpad Plus) is going to be used for when it comes to games. Just like we saw with Nintendo’s brilliant, but ill-fated Wii U all those years ago, mini-maps and HUD information are pretty obvious choices for this 14.1in touchscreen, as are leaderboards for online multiplayer games. Indeed, while Asus wouldn’t go on record about which games might be getting special Zephyrus Duo features, it was hard not to notice that Fortnite was one of the featured games in its looping demo reel of potential Screenpad Plus features. 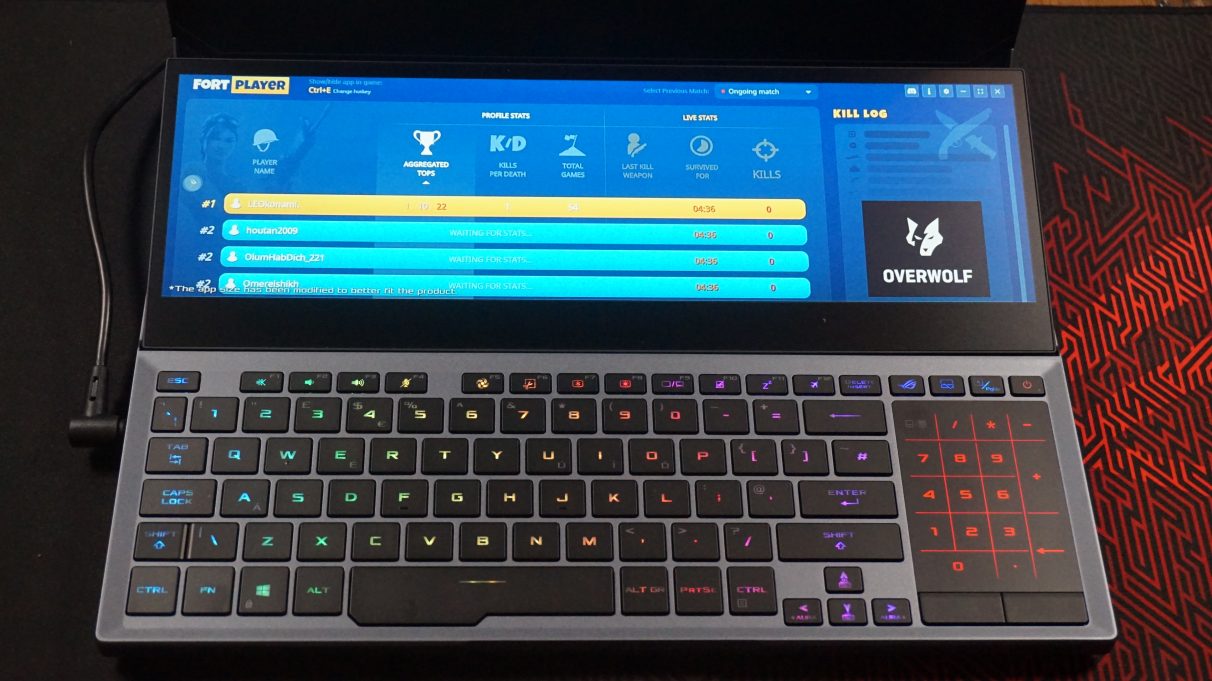 Technically, it’s a re-tooled version of Overwolf’s current Fortnite extension app, but as you can see above, the screen showed a bunch of stats, such as the K/D ratio for all the top players in an ongoing match, how long they survived for and how many kills they’d racked up in total. There were other Overwolf apps on show as well, including Dota 2 and Rainbow Six Siege extensions that tracked your laptop’s performance, items and leaderboards again, but the appeal of the Zephyrus Duo’s second screen doesn’t just lie in dedicated game apps.

Indeed, you could theoretically use it for sticking all your streaming and Discord chat apps down there as well, as then they’d be in full view without making you Alt-Tab out of your game to interact with comments and such, or hook your laptop up to another display.

Yes, it’s a very expensive bit of extra convenience, but behold. Here is that second screen rising majestically from the base of the keyboard tray, its firm and sturdy hinge rising up and down automatically with every lift of the laptop’s lid. No fiddly kickstands, no fussy hooks. Just one clean, beautiful movement.

When I saw the Zephyrus Duo in person, I have to admit I was quite mesmerised by the way the Screenpad Plus opened and closed of its own accord, and I was thoroughly impressed when it didn’t even move an inch when I started prodding its 14in touchscreen with my fingers. It’s an incredible bit of engineering, and Asus have clearly put a lot of time and thought into making it feel just right.

It’s not just the touchscreen that made me go a bit weak at the knees, either, as the Screenpad Plus also provides a couple of extra nifty ventilation points for the Zephyrus Duo, helping to keep the laptop that bit cooler under load. Indeed, when I got round the back of the laptop and shone a torch underneath its raised touchscreen, I could just about make out two extra fans whirring away beneath it. I’ll have to wait and see how these perform in practice once review samples are available, of course, but it could be just the thing to help keep the Zephyrus Duo’s noise levels under control when you’re playing games on it. 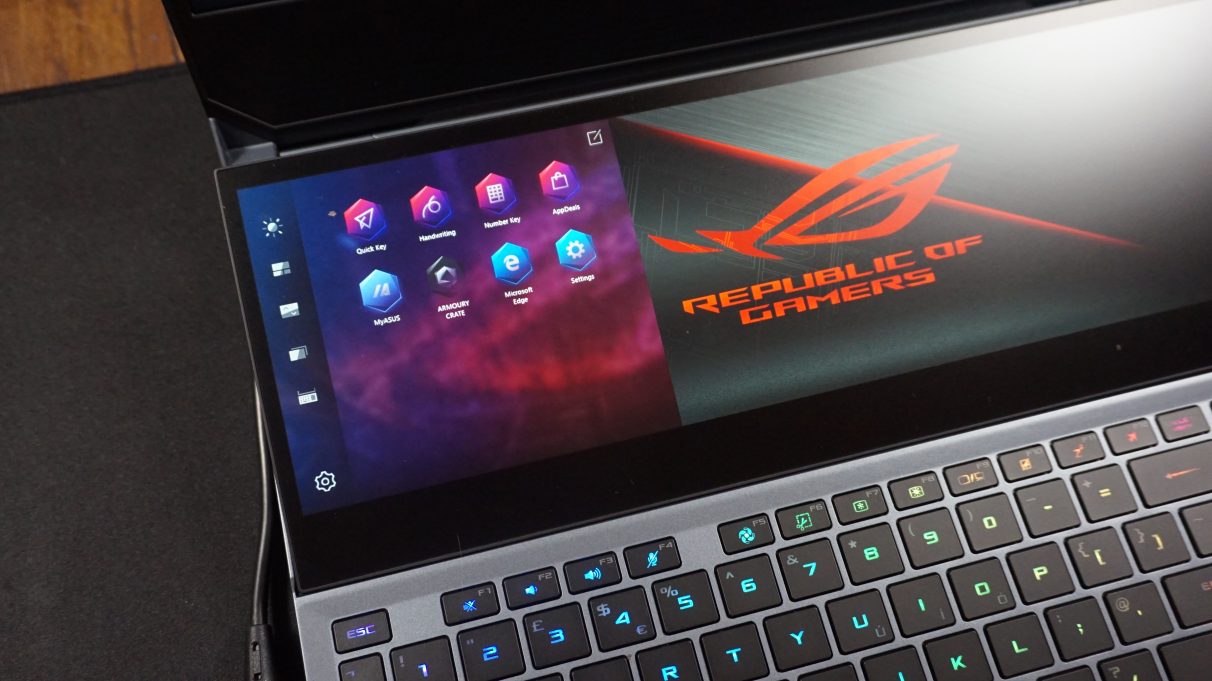 Away from gaming, you’ll be able to snap up to three windows to the Screenpad Plus using Asus’ special app, or you can just drag windows down manually from the main display.

It’s going to need as much cooling as it can possibly get, too, as it’s also going to be one of the first gaming laptops to come with Nvidia’s new RTX Super graphics chips, too. Previously, RTX gaming laptops were limited to the non-Super versions of Nvidia’s ray tracing-enabled graphics chips, but now they’ve finally worked out how to cram their Super cards into laptop form as well.

There will be two versions of the Zephyrus Duo when it launches in July – one with an RTX 2070 Super inside it, and another with the even beefier RTX 2080 Super packed within its bowels. Both will be factory overclocked by Asus as well, which they say will increase performance by 15-20% compared their non-Super equivalents.

Asus have also used a special liquid metal thermal compound to help keep Intel’s new high-powered 10th Gen Comet Lake CPUs cool as well, resulting in temperatures that are 7% lower than they would be with their regular thermal compound. And no wonder, given that the Comet Lake CPU Asus have decided to stick in this thing is Intel’s top-end eight-core Core i9-10980HK, which has a massive top frequency of 5.3GHz. Combine that with 32GB of RAM clocked at 3200Hz and the Zephyrus Duo packs some serious power. 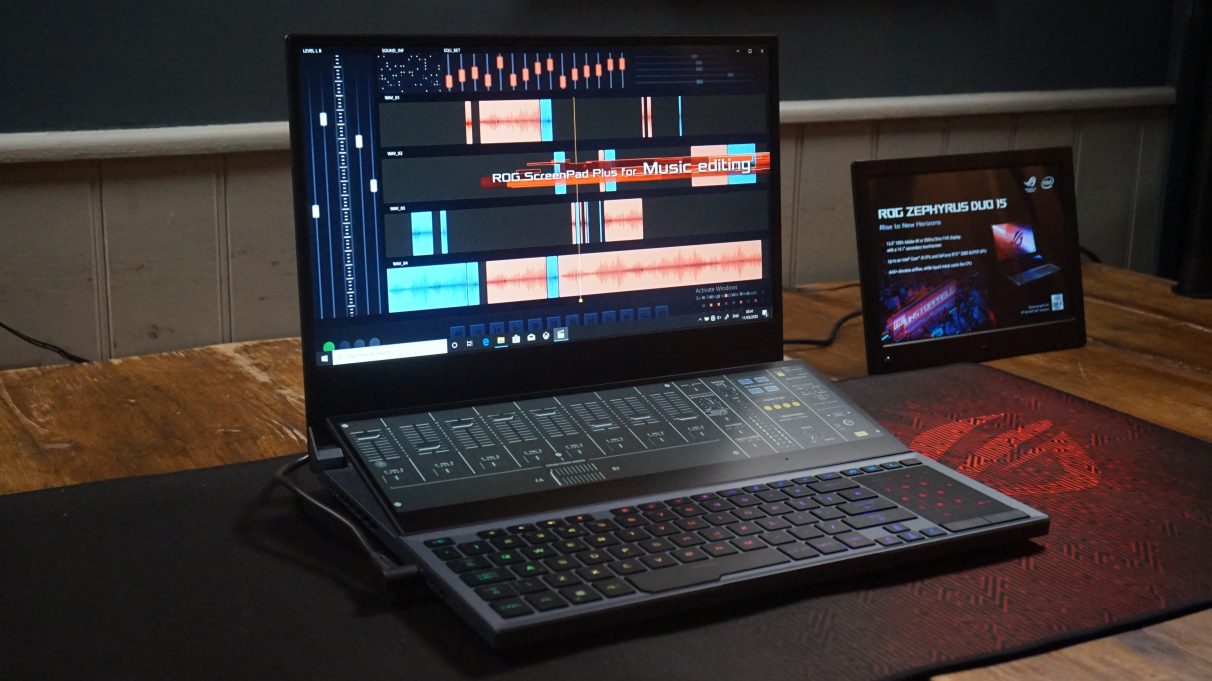 You’ll have two choices of display, too. On the RTX 2070 Super version, you’ll get a 15.6in 1920×1080 with a huge 300Hz refresh rate, while the RTX 2080 Super model will come with a 4K resolution capped at 60Hz. Both will be Pantone-validated, too, ensuring their panels will have top notch colour accuracy for gaming and media editing alike, and come with full Nvidia G-Sync support as well.

You don’t need to worry about storage problems on the Zephyrus Duo, either, as the RTX 2070 Super model will come with a 1TB NVMe SSD, while the RTX 2080 Super version will have two 1TB NVMe SSDs RAIDed together.

The keyboard will no doubt take a little getting used to, what with it being shunted down to the bottom of the laptop rather than in its usual place just below the screen, but when I tried typing on it myself I was pleased to see there was a decent level of tactile feedback present and a good amount of travel. The touchpad also doubles up as a handy number pad, too, which you can switch between on the fly by pressing and holding down the integrated button in the touch pad’s top left corner. 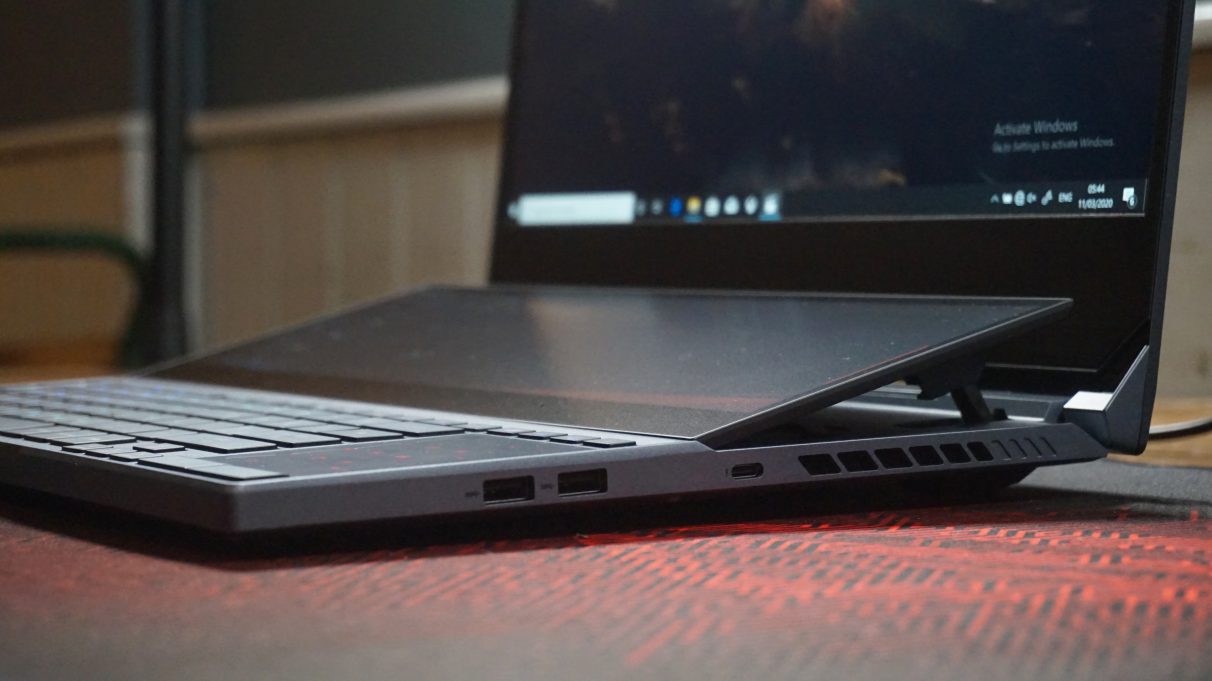 The really great thing about the Zephyrus Duo, though, is that it’s so thin and light(ish) compared to your typical gaming laptop, measuring 20.9mm thick and weighing 2.4kg. Its plain magnesium-aluminide chassis and anodised finish also means I’m not going to be embarrassed taking it out of my bag in public (if and when we’re finally allowed out of our houses again, of course), and I don’t even have to lug its 90 Wh power adapter around with me if I’m not going to be playing games on it out and about, as you can also charge it with a regular USB-C plug.

Not that I would be in a position to work and play games on this mad gaming laptop, of course, as I simply don’t have a spare three grand tucked away to spend on something like this. And that’s just the price of the RTX 2070 Super model, too. Who even knows how much the RTX 2080 Super version’s going to cost. Probably closer to £4000 if I had to guess, as Asus unsurprisingly only had the ‘starting’ price to hand during my preview session.

Still, as a glimpse of what gaming laptops could look like in the future, the Zephyrus Duo does paint quite an attractive picture. Yes, only three people on the planet will probably buy one of these come its launch in July, but I’m looking forward to seeing how its second screen stuff all shakes out. Could we finally see the promise of Nintendo’s Wii U fulfilled in laptop form? Or will it be another thunderous technological mistake? Only time will tell.