“Your mileage may vary” is a term writers use a lot because it does a lot of heavy lifting. It can helpfully mean either “I liked it but I can see why others would not”, or exactly the inverse of that. I can’t help but feel, though, that it was a phrase invented for weirdo Renaissance painting point-and-click adventure The Procession To Calvary, because I think both things about this game simultaneously. (And yes, I know the phrase was clearly invented for cars. But you take my point, please do not darken my door with your pedantry).

The Procession To Calvary is a sequel to developer Joe Richardson’s previous game Four Last Things, and if you’ve played that, then you’ll know pretty much what to expect from Calvary. It has the same Monty-Pythonish style of animation, using figures cut and pasted from different paintings, the same use of royalty-free classical choons as music, and the same sense of humour.

Calvary begins at the end – the end of a war between the north and south of an unspecified country, to be precise. The north has declared itself victorious, and its tyrannical enemy, Heavenly Peter, has fled back to his basilica in the south. But your player character was rather fond of all the murder she got to do in the war, and makes a deal wherein she is allowed to do one last killin’, on Peter himself. Off she clanks in her armour, legs flying amusingly around as she goes.

Using assets only from paintings actually gives the art a lot of scope, because a lot of art (especially Renaissance art) is bonkers. You’ll run into a street magician and/or messiah figure, a group of animal demons struggling with a riddle left to them by Satan, and a librarian made of books, to name but three examples. 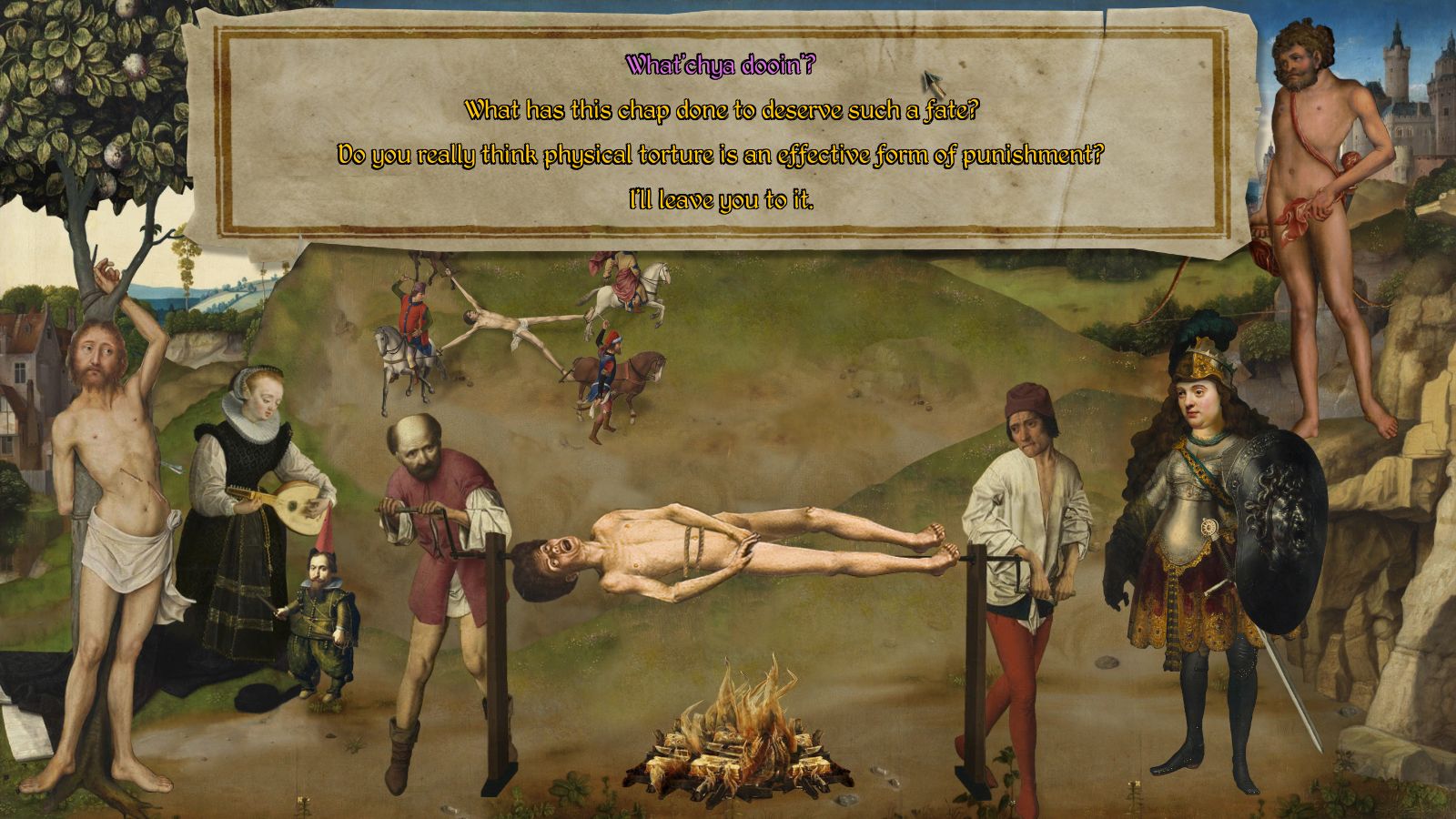 Interacting with them involves using a radial menu with yer usual Talk, Look At or Touch options, although Calvary has the added option to draw your sword, after which the pointy implement will replace the Touch option. You don’t actually get to use it terribly often (not without consequence, at least), but it’s fun.

Puzzles themselves are mostly logical, at least within the logic established by the game, and Calvary actually does a splendid job of introducing you to how things work, and how puzzles might be solved. Early puzzles involve such head-scratchers as “picking up a pair of socks”, but by the end you’re mired in layered problems such as finding something which a man sleeping in a grave would like cuddling more than a book, so you can get a crown, so you can give it to one of the scholars in the basilica, and so on and so forth. But all the steps in these puzzles make sense, especially if you pay attention to the clues seeded generously through the dialogue. 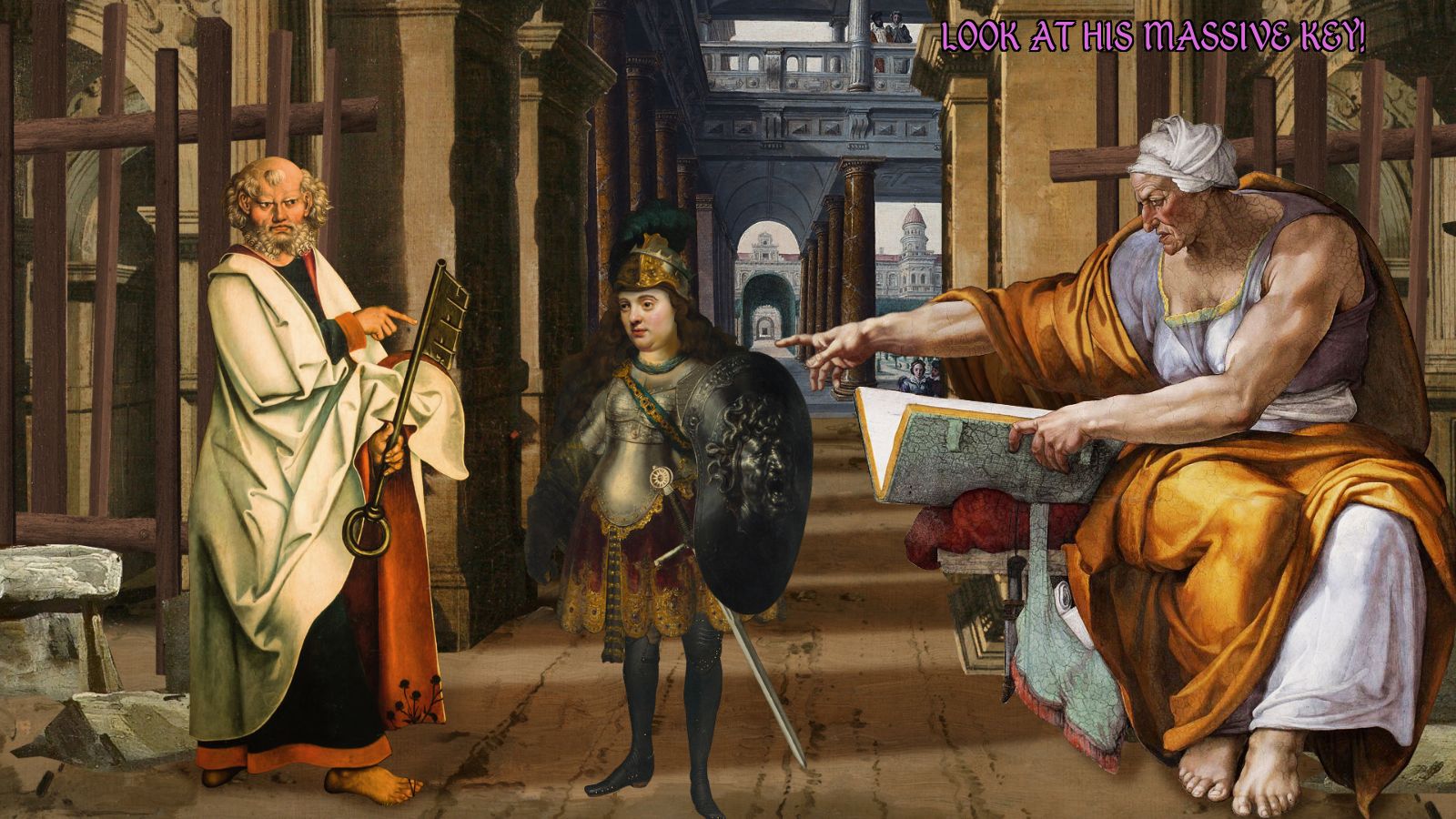 Richardson’s writing is both warm and appreciably dark in its humour, and given to asides and footnotes like those you’d find in a Terry Pratchett book. But at the same time, not every joke can land. The couple of times when the fourth wall was broken, for example (with Richardson appearing as God, as creators are wont to do when they show up in their own work), rubbed me decidedly up the wrong way. Calvary, probably unavoidably, features a lot of poking fun at the church and messianic figures alike, but I did sometimes feel like the poke was more like an elbow being dug into my side.

But the exaggerated animation, combined with the often grotesque – yet somehow still remote and bloodless – style of art means that scenes like a hill of crucifixion victims writing and screaming, or a man being slowly turned on a spit over a fire, become pretty funny in and of themselves. 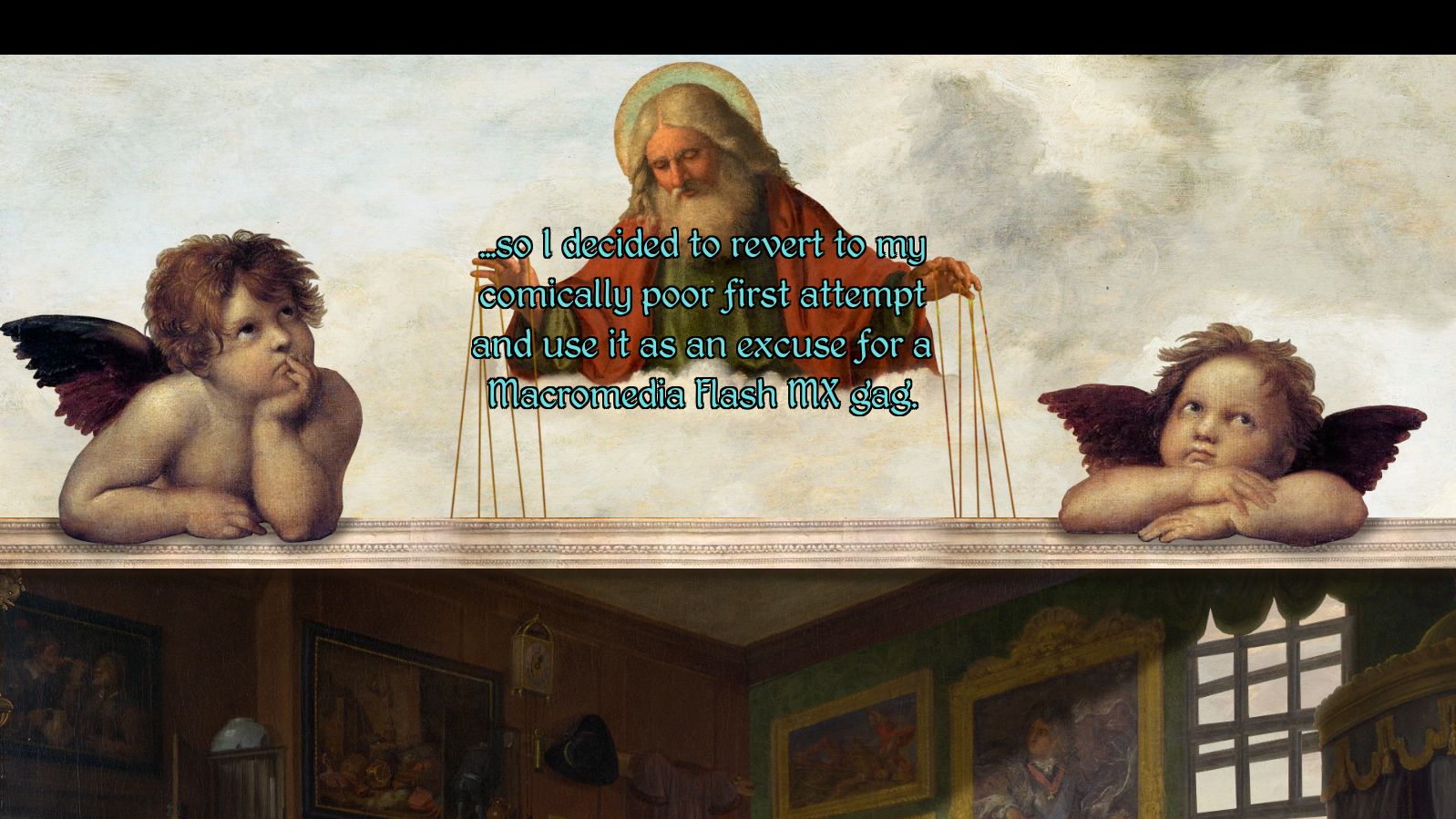 Calvary and Four Last Things both wear their Monty Python influences very much on their sleeve, though, and this is appropriate. Because while Monty Python is funny, people tend to forget that the TV show in particular had about as many misses as it did hits, and only the hits made it into the clip compilations. Yes, yes, I will whip myself in penance later for saying so, please hold your comments.

But by that metric, The Procession To Calvary is better than Monty Python, because it’s probably more consistent and, perhaps surprisingly for the content, less surreal. But your mileage, as they say, may vary.

More about The Procession to Calvary