Microtransactions have become a ubiquitous, if contentious, part of mainstream videogames. They crop up everywhere, from mobile games to $50 big-budget titles, with varying degrees of success and backlash. At the heart of the issue lies the equilibrium between the consumer’s valuation of media, and the developer’s increasingly tight margins as developmental costs rise. Recent events have raised all manner of real, pertinent questions (and led to proposals to legislate microtransactions, something being explored in several countries).

But even as such measures are introduced, it’s hard to resist the urge to speculate on what microtransactions could become. What would happen if the consumers never protested? How far would developers push the envelope with microtransactions? What would a culture of unbridled monetisation look like?

What if that game already existed?

In the 1990s, the nascent internet was a very different place. Less than one percent of the human population logged in regularly, and Multi User Dungeons (MUDs) were in their heyday. An early genre of online roleplaying games, MUDs are inspired by Dungeons & Dragons, and in turn inspired modern MMOs, with one fundamental difference: MUDs are entirely text-based. They’re are equal parts creative writing, hack-and-slash fantasy, and good, old fashion grinding.

Eschewing graphics entirely allowed developers to focus their efforts on mechanics and world-building, resulting in streamlined, immersive games that did not become dated with each GPU generation. Rather than clicking to manoeuvre through a visual world, players interact by typing commands – “kill orc”, “push lever”, “east” and “say Hello” being among numerous examples. A polished, fully realised example of this genre is Achaea, Dreams Of Divine Lands, the flagship game from Iron Realms Entertainment (IRE). Launched in 1997, Achaea remains small but active, with a playerbase numbering somewhere in the low thousands. 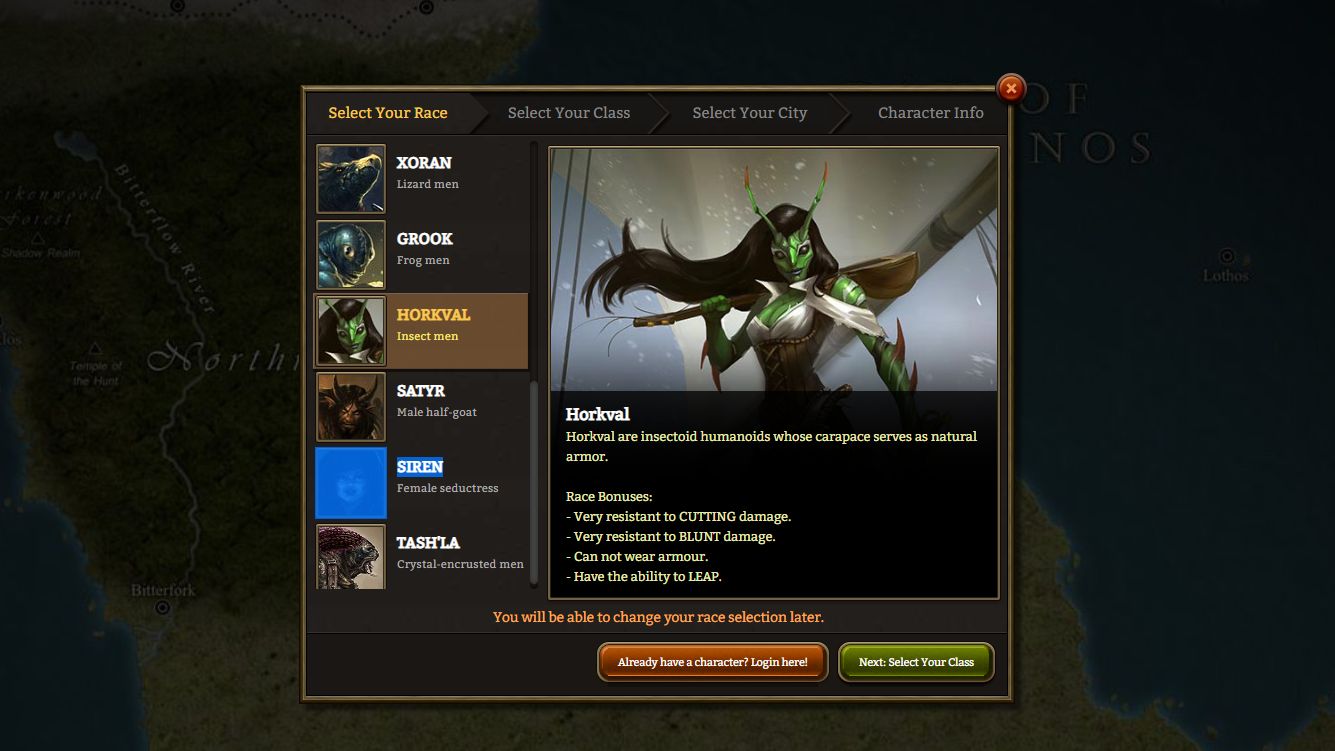 Achaea, which can be played in browser or with a telnet client, bills itself as “the world’s premiere MUD”, and not without some reason. Featuring 18 classes, 13 playable races, a half-dozen player-run city-states, numerous religious and secular factions, and play so detailed as to be staggering, Achaea represents a fully realised sandbox environment. It’s the sort of game where you have to remember to put items you pick up in your bag, otherwise you’ll lose them. Use specific syntax to give or take items, slowly and carefully level up, and violently headbutt goblins, that sort of thing. After 26 years of constant development, most aspects of the MUD are hypertuned to a proverbial T, especially the PvP, which remains one of the games largest draws. And it’s fun! It’s a good game!

Because it’s free-to-play, Achaea has for two decades subsidised its costs by offering an optional premium currency, the ubiquitously named Credits, for purchase. These can later be converted into game-altering boosts. Such an idea is now in well-travelled territory, but in the 90s the concept of purchasing purely digital goods was novel. In fact, predating cash-transfer services like PayPal, one of the most popular ways to purchase credits was snail-mailing a cheque directly to Matt Mihaly, the game’s founder. While such early adoption quirks seem charming in retrospect, something a lot less endearing was occurring.

The problem was that Achaea’s monetisation was so far in advance of the market, no-one knew how much digital goods should cost. Given free reign, and without the context of competition, prices for premium services in the game were assigned (apparently) arbitrarily, and have remained relatively unchanged in two decades.

So, how much do things in Achaea cost? What does a microtransaction free of market forces, legislation or an informed consumer base look like?

Fully mastering your character’s skills at level 80 (a late game breakpoint) will cost you $511.99. Once that’s done, maybe you’ll set your eyes on a Hood of the Sphinx, a powerful artefact that will let you keep track of targets no matter where they are. It’s only a breezy $712.50. Want to increase your strength from 15 up to 18? You’ll be after some Logosian Gauntlets – yours for a mere $579.99. And there are dozens, if not hundreds, of items like these to buy. 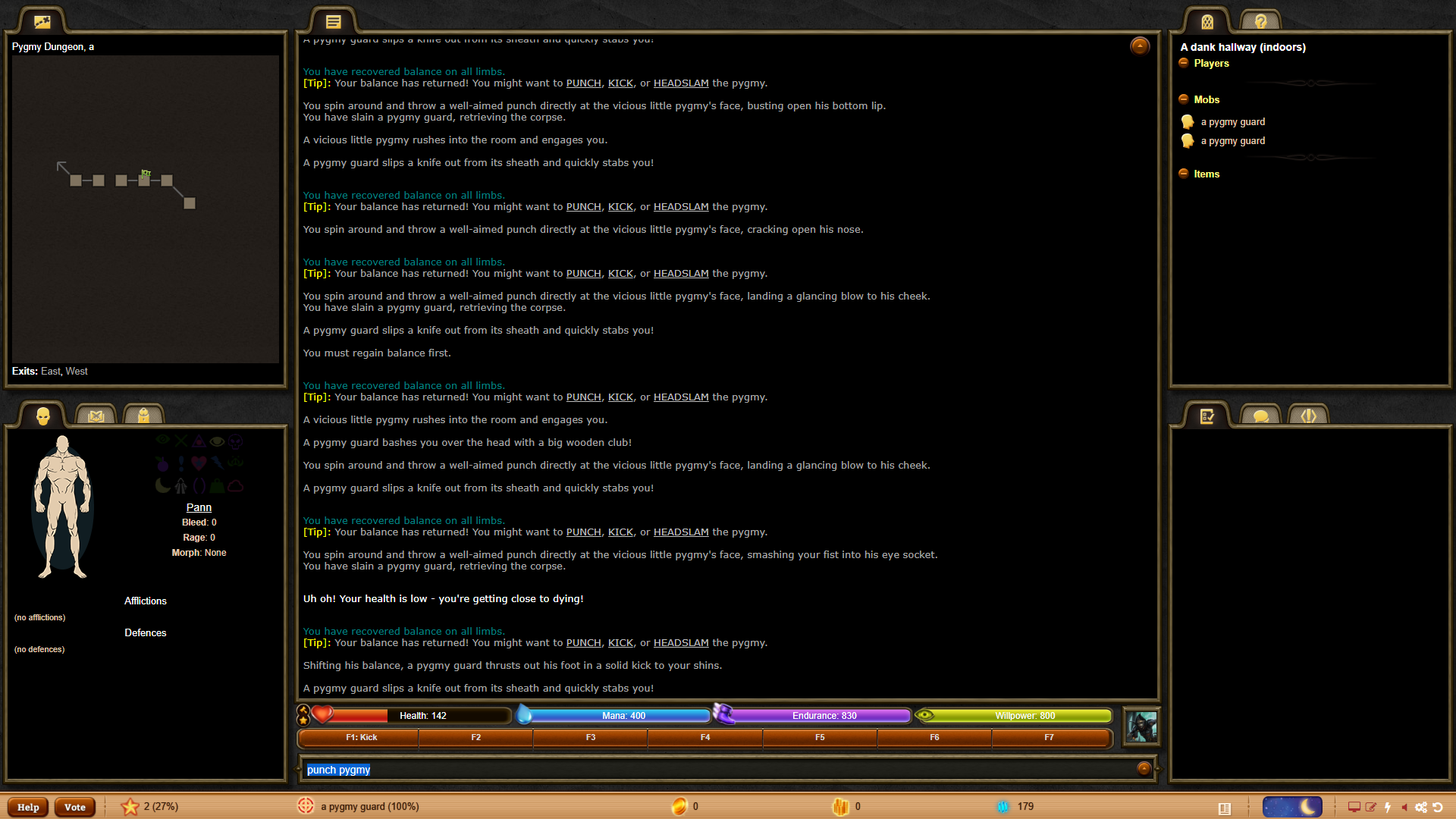 “I’ve gotten to a point where any further advance requires $500 or more investment from me, for a single item, or to add an additional class,” said “S”, a longtime player, who admitted to spending more than $20,000 over the years. But why stump up so much? “For me, combat [in Achaea] has a level of skill required for success that you don’t find elsewhere.”

It’s a common theme: the competitive nature of the game, especially in PvP, means when one player begins spending, it encourages those around them to keep pace. No surprise, then, that most expensive artefacts are the ones with PvP implications. As this process continues (and Achaea’s playerbase ages) the spending is drying up, since most characters are fully geared. And if you’re asking why people don’t just stop playing in protest, well, they might be. Remaining players share anecdotal evidence of the playerbase itself shrinking: friends leaving, the PvP pools drying up. It’s a shame because, as mentioned, Archaea isn’t a bad game – the opposite, in fact.

In response, the developers at IRE have rolled out limited promotional items – new content added explicitly to be purchased – mostly in the shape of lootboxes. Some of these lootboxes open like Russian nesting dolls to reveal smaller lootboxes, a possibility that has many players raising their eyebrows. Adding in “artefact auctions”, where runaway bidding has led to single items selling for more than $5,500, and players nerves are beginning to chafe, leading to, for example, a push for the free generation of Credits through playing, which was implemented in other IRE games before Achaea.

But the exorbitant pricing remains, and the consequence may simply be Achaea’s ability to retain new talent. “The game itself is very well built and fun, with an amazing community,” one new player expressed. “However, the state of the game requiring thousands of US dollars in order to get into the state of viability is horrendous!”, they said, adding that charging such “absurd” amounts for little gain “pushes away” new players like them. 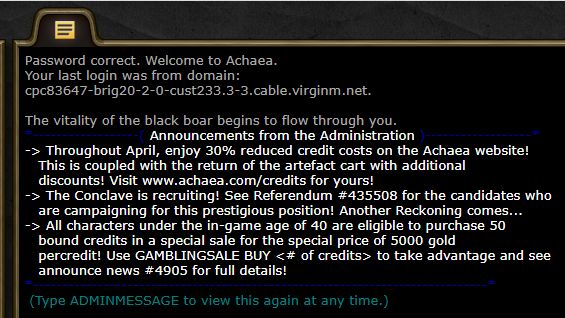 An admin message I got when logging in today, informing me of some discounts on credits

We reached out to Iron Realms to ask about the credit pricing, how it was set, and if they think it offers value for money – as well as if they have any concerns that it turns off new players. Mihaly, who, in a forum thread discussing subscription fees, did state that he is “no longer involved with running Achaea directly”, responded very fully via email.

“Sure, we know many players would like prices to be lower. That’s been the case for our entire lifetime, going back to Achaea’s release in 1997. They’re cheaper than they used to be (they were almost double at one point early on) and we haven’t raised prices for just about 20 years, so in real dollar terms they’re substantially cheaper than they used to be and getting so every year, but of course we know nobody cares.”

“Yeah, our virtual stuff is fairly expensive compared to most other games that use the business model we pioneered. We’ve always been very upfront about that. It’s just a function of our size and our high staff-to-player ratio. Our games have tiny player populations. Most of them have less than 100 concurrent players most of the time. In fact as I write this, our largest game – Achaea – has only 93 people online, some of whom are staff. It’ll go up some as it heads to peak playing time later today, but it’s not as if the game suddenly swells to 5000 players, or even 500. We just don’t have a lot of players. We’re lucky to have the playerbases we do given that most commercial MUDs shut down long ago and even most hobby MUDs are ghost towns.”

“In terms of staff-to-player ratio, we maintain a vastly higher one than most MMOs do, particularly in terms of developers and content creators, mainly as a function of our small size. The biggest MMOs, like World Of Warcraft or World Of Tanks have/had over a million concurrent players regularly, and interesting fact: Achaea’s population peaked the month WoW launched.”

“Achaea has about 150 max concurrent players on a given day, and has 4 full-time devs. That’s a concurrent player to dev ratio of 38-1. That is an absolutely massive difference. That ratio isn’t the only thing that dictates costs but it’s pretty illustrative of why our virtual items are priced fairly high compared to other games. And, of course while most people playing WoW pay a monthly subscription, many of our players don’t spend any money. The prices are high because they have to be to keep us going as a viable company. Believe me, we would love to have a big enough playerbase that some economy of scale kicks in and we could drastically lower prices, but we aren’t even close.”

“That segues into your question about whether high prices will turn off new players. There’s no doubt it doesn’t help, but it’s so hard to get new people into MUDs in 2020 that it is a small part of the overall player acquisition problem for us. To be blunt, and I don’t expect anyone reading this is surprised, but it’s really really hard to get people interested in starting to play a MUD today. It has been for a long time, unfortunately, and nobody’s spent more time and money doing that over the last two decades than we have trying to find solutions, mostly unsuccessfully.”

“Barring a small renaissance in the world’s interest in MUDs, there’s no realistic way for us to dramatically cut prices. We just have to continue to hope that the playerbase sees and appreciates the work the teams on each game do and supports us because of that. We’re extremely grateful to have survived as a company for 25 years now making games that occupy this tiny niche and hope to have another 25!” 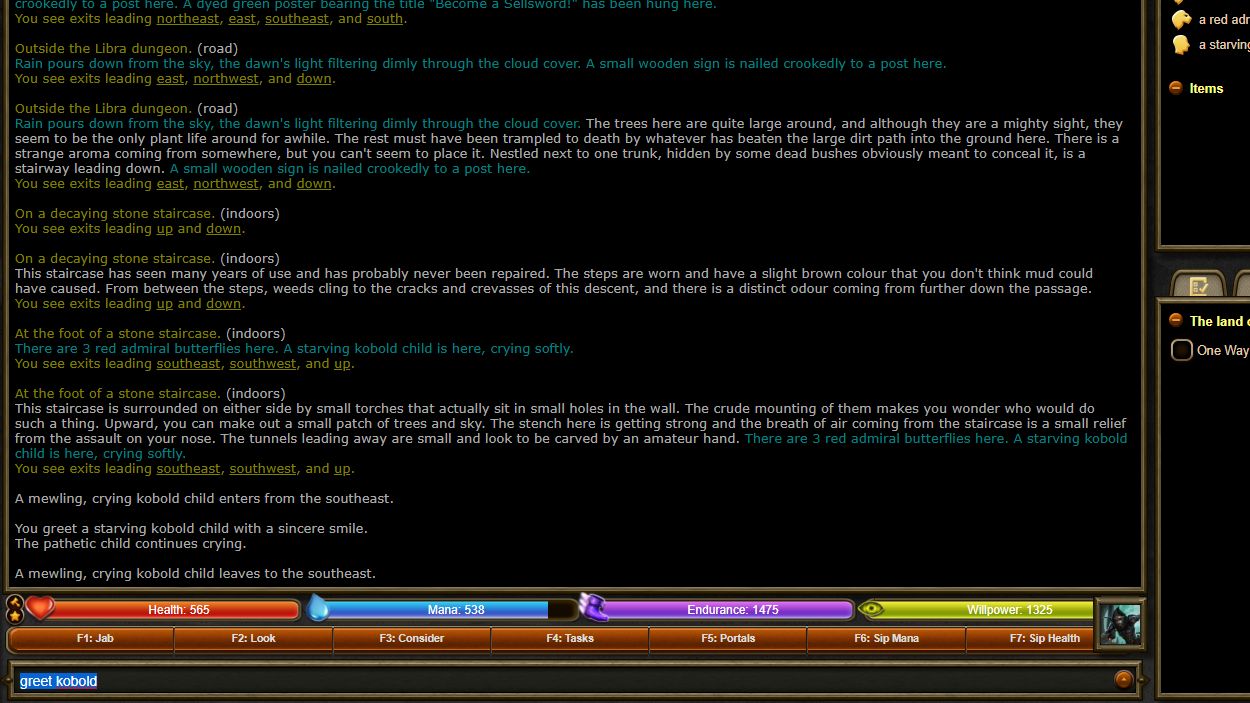 Look it’s a hard game to get fun screenshots of, alright?

These are points raised Iron Realms before, notably in that aforementioned forum thread, but the grumbles from players remain. And it may be technically accurate that a totally free-to-play character can be made equivalent to one with premium bonuses, simply by grinding playing the game. But that doesn’t ring entirely true with players either.

That’s about four and a half years of unbroken play. Or a quick swipe of a credit card.