I’ve been fairly critical of Mount & Blade II: Bannerlord. I even went far enough to say I couldn’t yet recommend it outright, but maybe I haven’t made it clear that there are a lot of things about it I love. 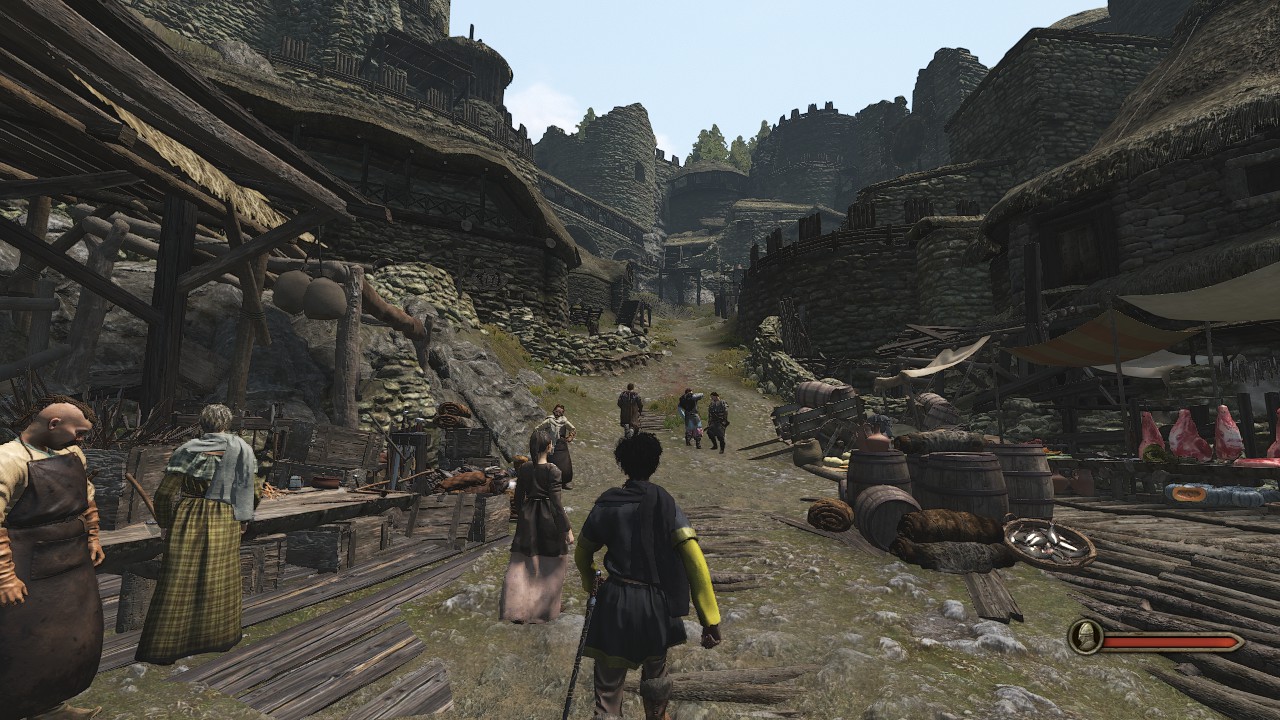 Seonon is a blend of a proud stronghold and a ruined craphole.

Okay, so, I actually think putting so much work into the towns was a mistake. One of the main things I appreciate about Bannerlord’s, predecessor Warband is that it minimised the trudging. I hate trudging. It is the bane of RPGs to trudge joylessly about, back and forth, just to replenish ammo and health sticks, to convert your hard-won rat kidneys into space doubloons, or tell Stamps McGee that you’ve found his stamp collection. In Mount & Blade, visiting towns brought up a menu where you could just click on the options you wanted instead of wasting your time walking around for nothing. You could still do that for the hell of it, and you still can in Bannerlord.

I almost never do, because they take ages to load and 99% of the time I just want to get to the market or report a finished job anyway. Horsey & Sword just isn’t the first/third person 3D exploration game that would make towns like this work.

But that doesn’t mean I don’t appreciate their design. 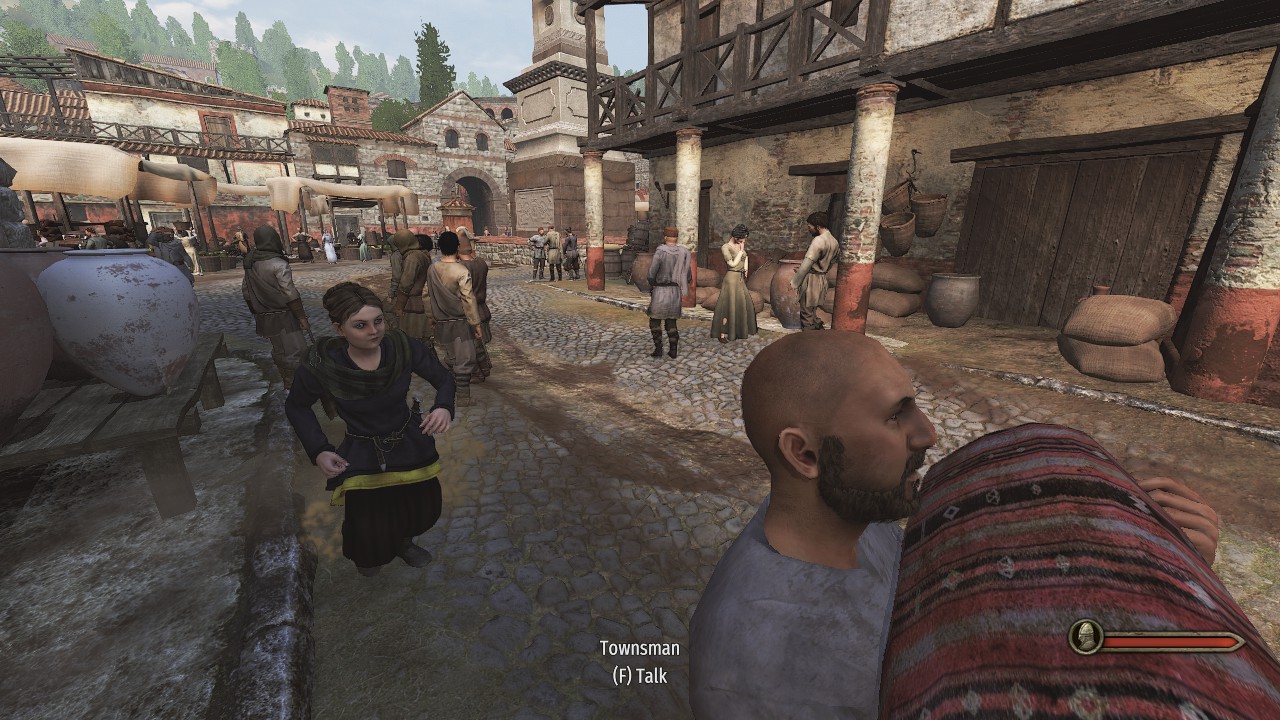 There’s one little girl just off camera who really likes pointing at things.

Each of the cultures has its distinct style, from the frosty log-and-hide ruins of the Battanian ones to the warm North African sandstone of the Aserai. The Greco-Roman imperial towns are particularly good. I’ve seen one with a little square away from the market, for people to rest or meet or do crimes. There are people milling about all over them. There are a pair of kids in a corner, poking about in the dirt doing important kid things. And the areas outside them look convincing, with canopies and small stone buildings and wooden frames dotted along the road outside, trees getting more crowded in the distance, where you can also see the outline of a mystery hut just for flavour.

A lot of love went into these. I don’t see them ever quite fitting into the structure of the game without chafing, but I hope to be proved wrong.

Also, a cute touch: you can ask any of the random peasants in town where a specific person is. They’ll then physically lead you over to that person. And better yet, they do so by jogging… but they will walk if they get too far ahead of you, and even stop and wait for you to catch up. Lovely stuff. 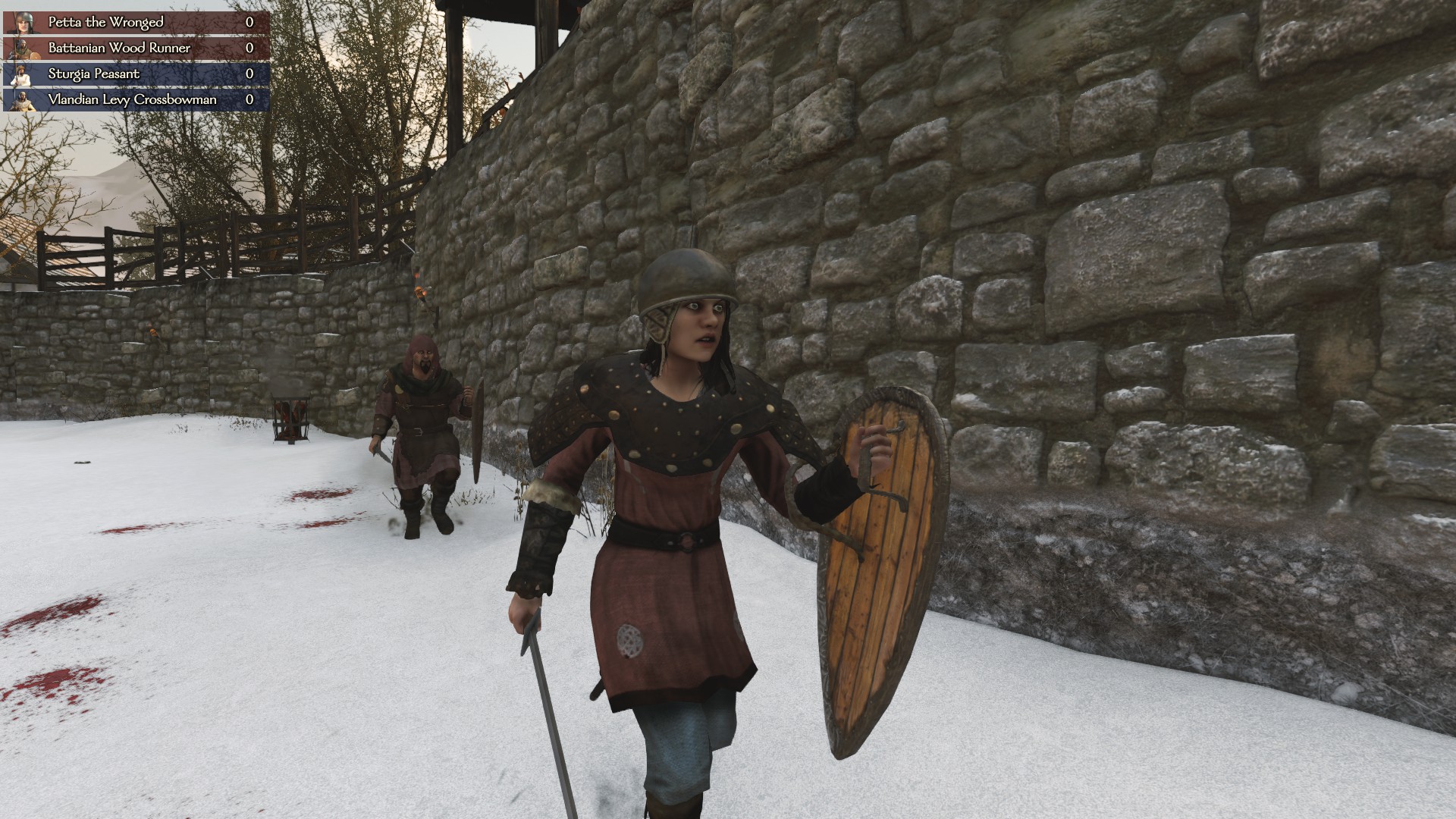 Minor bugs aside, the models look really impressive even on middling settings. And there can be hundreds on screen at once.

Tournaments in Bannerlord are more frequent and unpredictable. I miss the days of Zendar, when the arena was a constant, all you can eat tournament rather than the more dull practice fights. But the tournaments are much easier to find now, and much more fun.

Entrants are pitted against each other in teams of 2-4, or sometimes in duels. Losing teams are eliminated (excellently, teamwork is rewarded since you still go through if someone on your team does), and the final round is a showdown for the title. Winnings are random and currently very underwhelming (I’ve won the same named axe several times, and it’s a poor weapon that doesn’t even sell for much), but the idea of a particular piece of kit as a prize is great and I expect it to be improved somewhere down the line. It could even be something you smithed and sold yourself. And of course you can bet on yourself.

Better yet, you can watch the other rounds if you want to. This is surprisingly entertaining, especially when your lieutenants take part. Each culture has its own preferred weapons too. I’m rather fond of the Vlandian tournaments, as their big voulges are devastating and the many crossbows are an excellent leveller.

I’d really like to be able to bet on other contestants, mind, especially if I’m just watching. Maybe even get roguery points for betting on someone, then letting then knock me out.

I don’t want to fetch crap for this guy, but I do want his money. Hey! Hey, not-Matheld!

Whatever. Go do this job for the pig collector.

I uh, I’m the guildmaster of the imperial- 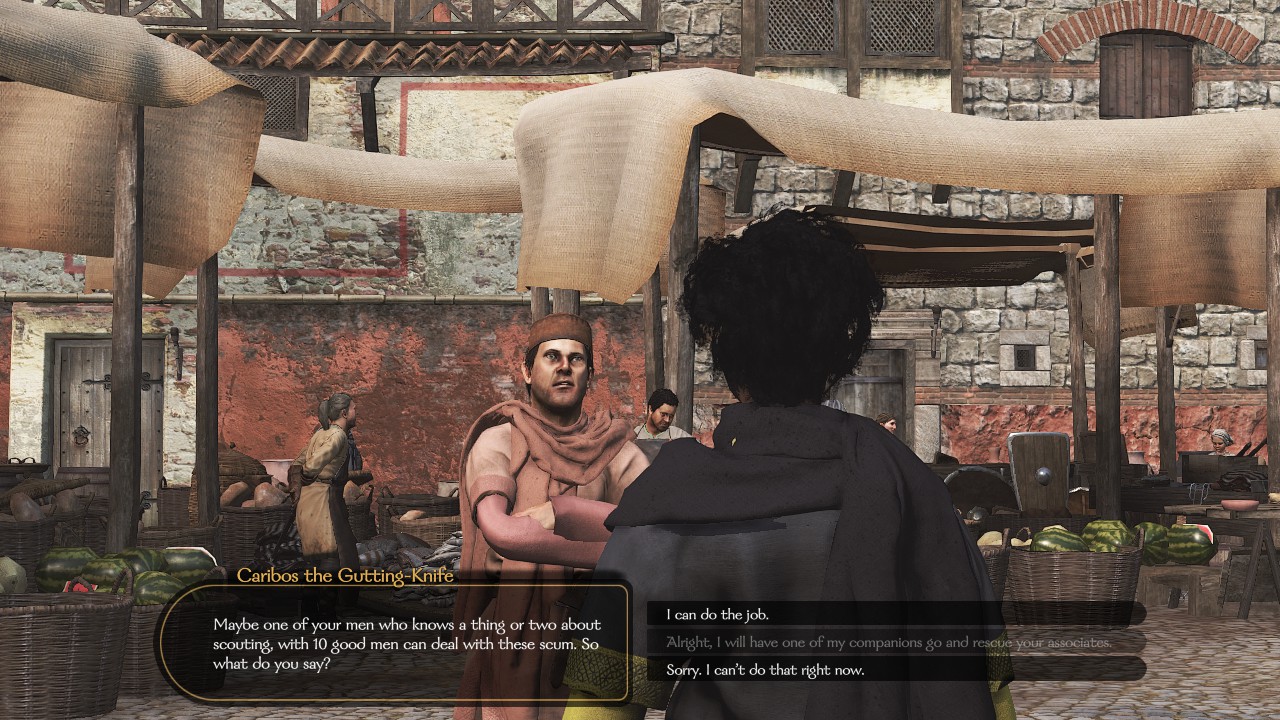 okay so *my* companions are hopeless but the point is, it’s possible

Want to profit without doing anything? Make your lackeys do it while you do stuff you enjoy. That’s called leadership, that is. Bannerlord lets you send your companions out with some troops to do most jobs you can, and even lets you send them off to form their own autonomous parties. The latter system is currently bare bones and a bit useless, but when its time comes I am hopeful.

But better yet, Bannerlord also lets you delegate control of your army during battles. Not just by sending them in from the map to auto-resolve, but down on the ground, when you’ve got your spear out. Its formation and tactical systems are clunky and take a lot of getting used to, but if you’re confident in your army and/or you just feel like throwing some lords off their horses and kicking their teeth out, a mere button press will empower your mooks to make their own decisions. Supoib. 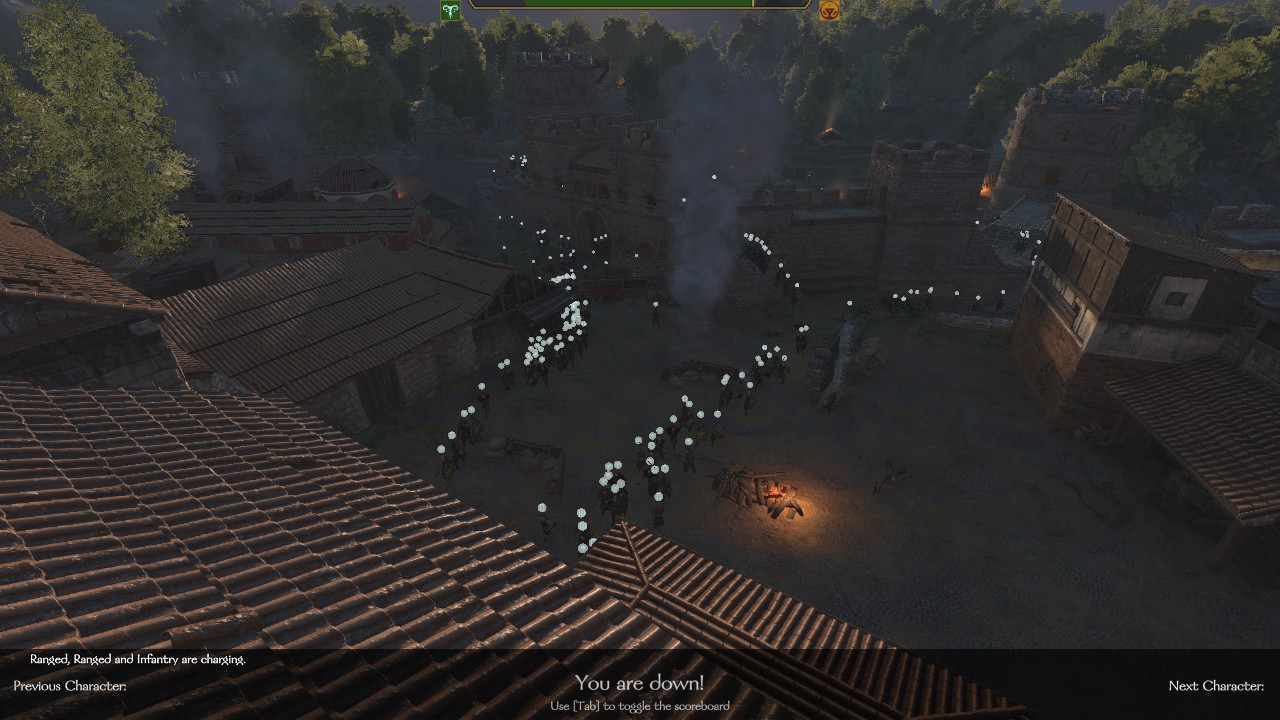 Music is actually effective when it happens during a siege, and not on a constant loop while buying grapes.

Bannerlord is one of very few games (including the original, several tunes from which have been re-recorded in nicer form for its sequel) that includes long stretches of silence in its soundtrack.

This should be in most games, but definitely all strategy games and RPGs that you’re likely to play for many, many hours. It stretches a soundtrack out for a far longer time, and means that you’ll get chance moments where music suddenly kicks in just when things are getting dramatic. Bannerlord has some lovely music, but I would have switched it off within a day like I do with most other games if some periods of respite weren’t built in. 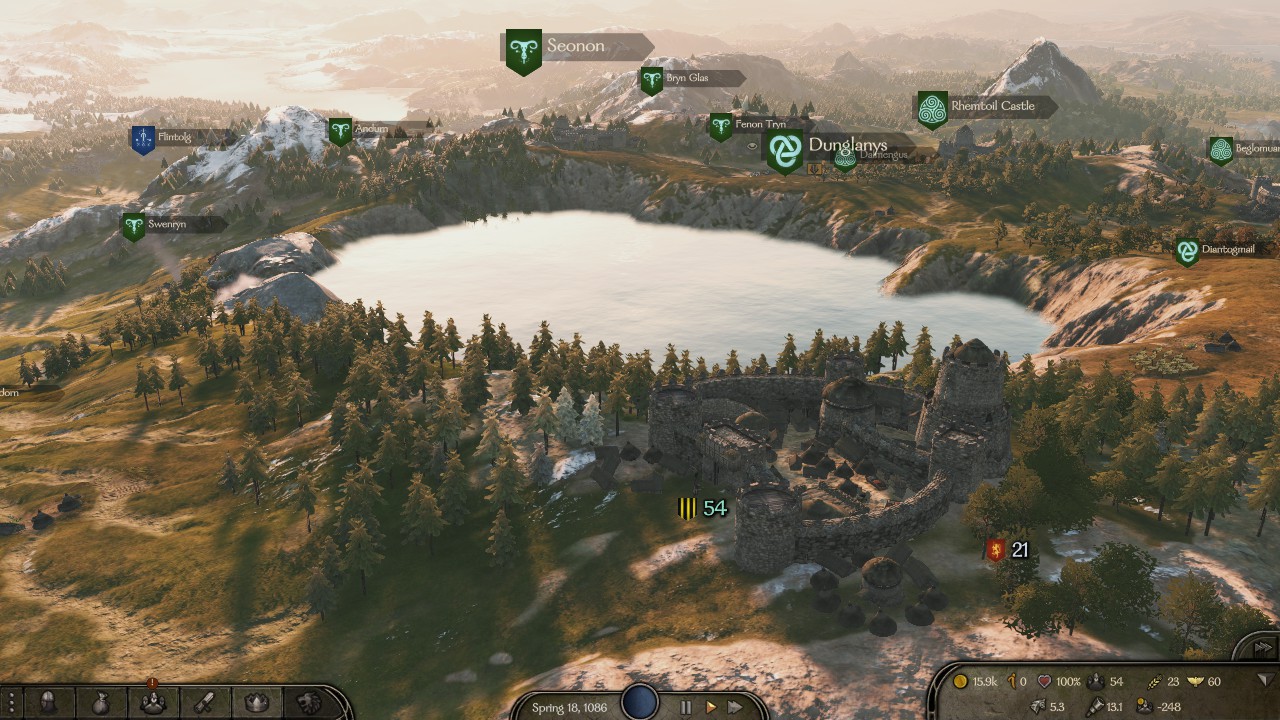 Battania is in a poor position strategically, and easily overwhelmed. But my goodness it’s pretty.

Look back at the Warbands map. Go on, I dare you. I loved that game as much as anyone but Christ it’s ugly. And so plain. I used to switch all the details down to get as many people in a battle as possible, but even whacked up, I couldn’t go back to that map now.

Bannerlord’s map is gorgeous, and feels both massive and navigable enough to make long trips worth considering. Huge swathes of it are heavily forested, lakes and rivers shimmer and glow in the twilight, snow spreads across the map, and all three combine especially around Loch Scotnot, ringed by three Battanian towns in close proximity. Even the towns and villages are nice to look at from up here. 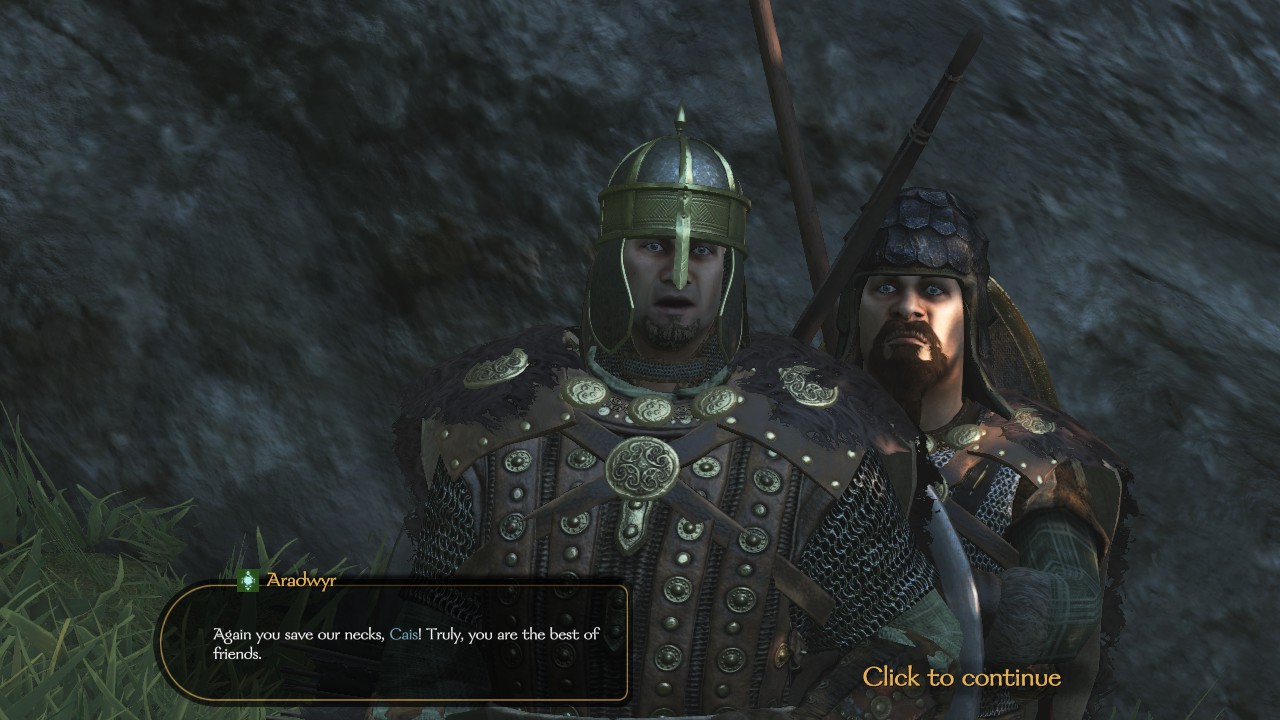 Who are you aga… I mean, YES HELLO DEAR FRIEND, HO HO

The fact that missile troops pick up loose ammo when they run out, and lancers will climb on spare horses. The player could always nick loose horses, and later versions of MnB let you pick up some dropped weapons and quivers (though they all disappeared after a battle), but being able to retrieve individual projectiles after they miss is great, and having the AI do it as well makes for some entertaining surprises. Flinging an axe into someone’s bits and then pulling it out and using it on someone else? Yes please.

The way that two fighting people will sometimes stop trading blows and pause to stare at each other for a few moments, then continue fighting. Sure it might even be a bug, but I like it. The way another trooper will run up to replace the man who just got shot while pushing the battering ram. A brave, stupid man. The little animations when parties on the map are fighting, and the way your own one reflects what you’re armed with. The noise throwing axes make when they whirl past your head.

There’s a lot about Bannerlord to make it worth waiting for, and I’d be shocked if there isn’t more on the way even before considering what modders will have done by the time its early access period is over.