Welcome back to Fallout 76, folks. Come on in, the water’s nuclear warm. If you’re coming back to Appalachia, you might need help gathering much-needed resources for your adventures. A handy Collectron bot can stomp around and collect junk for ya. If you choose to buy the new Communist Collectron though, you may find that your helpful worker is more concerned with spreading Communism than collecting scraps for you.

The new Collectron variant is available in Fallout 76’s Atom Store, the microtransaction shop, along with some other new communism-themed items. At first, Communist Collectron is funny. It’s an ungainly Fallout robot that clunks around spitting out such kernels of wisdom as “break free from your chains” and “long live the revolution.” After you’ve had a kick out of its voice lines, you can send your new Collectron out to do its job: bringing back food, water, and weapons to your camp.

As spotted by Kotaku, players who’ve bought the Communist Collectron are running into some ideological differences. You can set your Collectron to go out in search of food and water for your survival needs or weapons for your uprising needs. Either way, that’s not all that your comrade collects. It also brings home communist propaganda. Lots of it. Lots and lots. 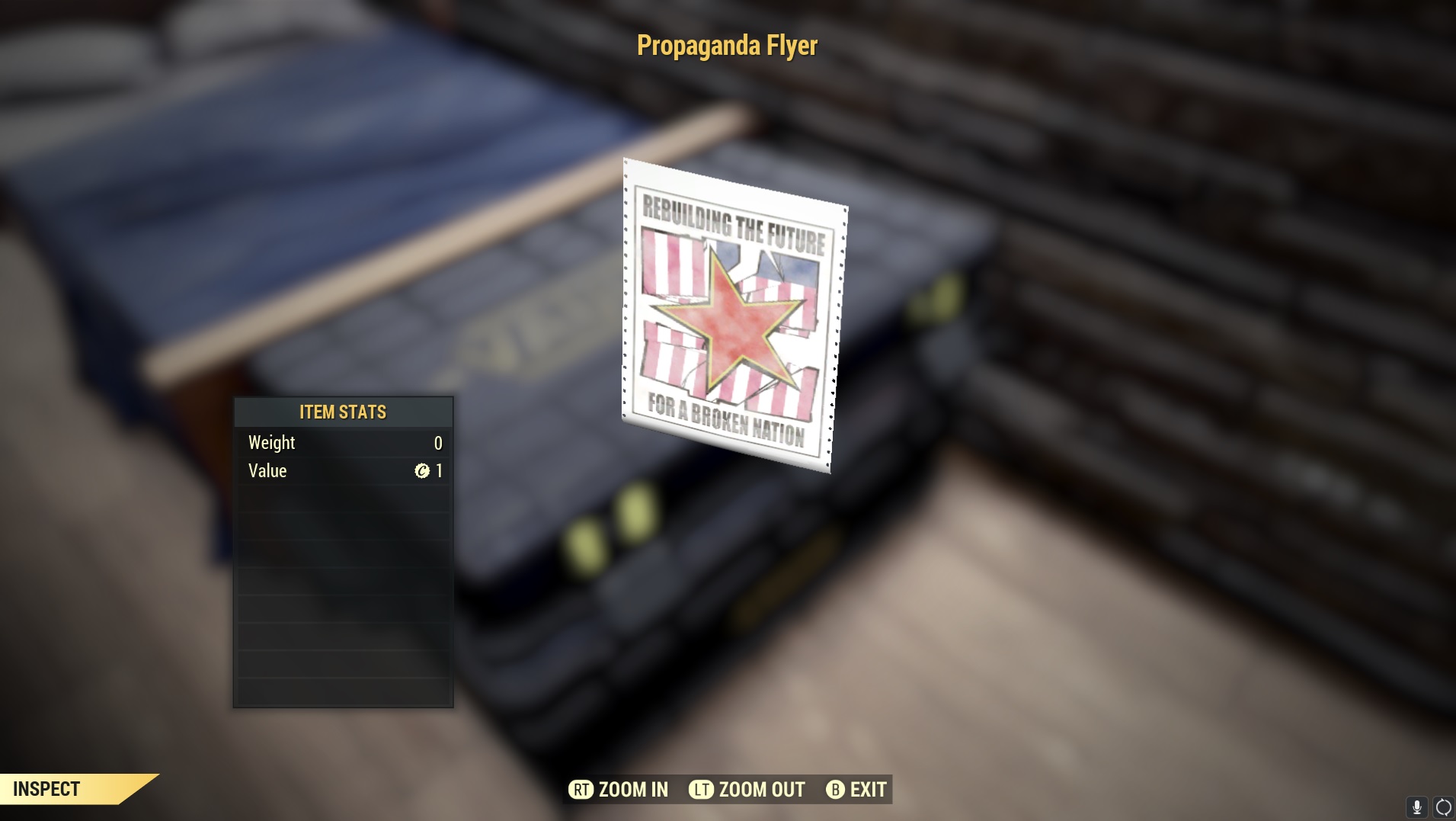 Oh look, I don’t even have a Collectron and I already have some propaganda in my stash.

“PSA for the Communist Collectron: don’t expect to get loaded with weapons,” warns “FireRabbit67” on Reddit. “I played for a few hours (maybe 3-4) and only got 35-40 propaganda flyers and a single frag grenade.”

Another user responds to give their own Comrade Collectron stats: “I have gotten 20 ish tomato soups, 50+ propaganda posters, 2 frags, hunting rifle, and a shovel.”

The trouble is, Communist Collectron’s station eventually fills up, at which point it stops going out to find new things. With the heavy ratio of propaganda fliers to useful items, it seems like this metallic friend is actually sending a message: acknowledge communism or cease your profit off robot labor. Well, except that you can sell the propaganda flyers for caps. It’s the principle of the thing, maybe.

I hope someone at Bethesda is having a good chuckle because—intended or not—this is exactly the satire I enjoy in the wasteland.

If you want some (maybe) propaganda-free help getting settled in Appalachia, here are some Fallout 76 guides for ya.