It’s always been hard to accept the beat ’em up’s idea of depth perception. Here’s a genre that asks you to punch and kick on a single wafer-thin plane, before slowly readjusting your 2D sprite a few millimetres deeper into the screen, to make a tentative punch at a foe somehow just out of reach, as if everyone exists as a sort of juiced-up Paper Mario goomba. Streets Of Rage 4 proudly holds that tradition aloft, like a big chicken drumstick. It is a solid game, in the sense that it is a handsome, tightly made thump ’em up, but also solid in the sense that it remains anchored in place by the genre’s rules and regulations. Between a rock and a chokehold, for better and for worse. 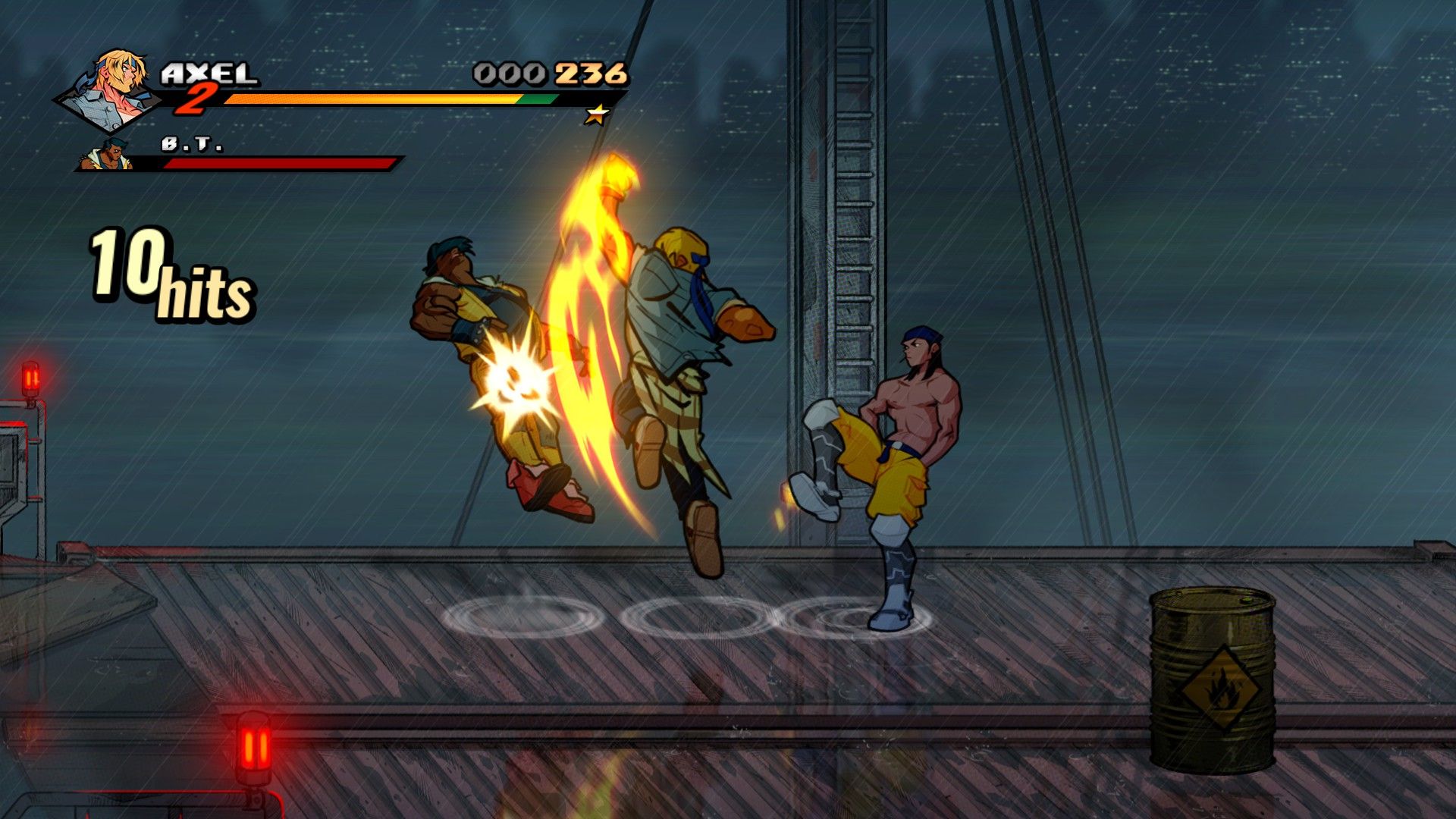 Fist things first, the punching. You’re a team of old fighters and new faces, with names like Blaze Fielding and Cherry Hunter, and your job is to hit the baddies and GO when the big arrow tells you to GO. There’s a handful of punch combos, kicks, volleys, knee digs, grabs, throws, flying kicks and other assorted knuckle employment to get you to the boss at the end of every stage. Each character has three special attacks (Y button on controller, and combining Y with jumping and movement) which eat a bit of your health bar. But you can get that chunk of health back by quickly punching baddies afterwards (like slicing wolfmen in Bloodborne to get your just-lost health back, or getting similarly vengeful in Dead Cells).

There are also big superduper moves you can do if you find a star. These are attention-grabbing, slow-mo megamoves. Cherry slides along the ground slamming her guitar and knees into goons, amid a spray of stage smoke to cover up all the shin-snapping. Big man Floyd fires a laser beam that takes up half the screen. Ah, that’s therapeutic. 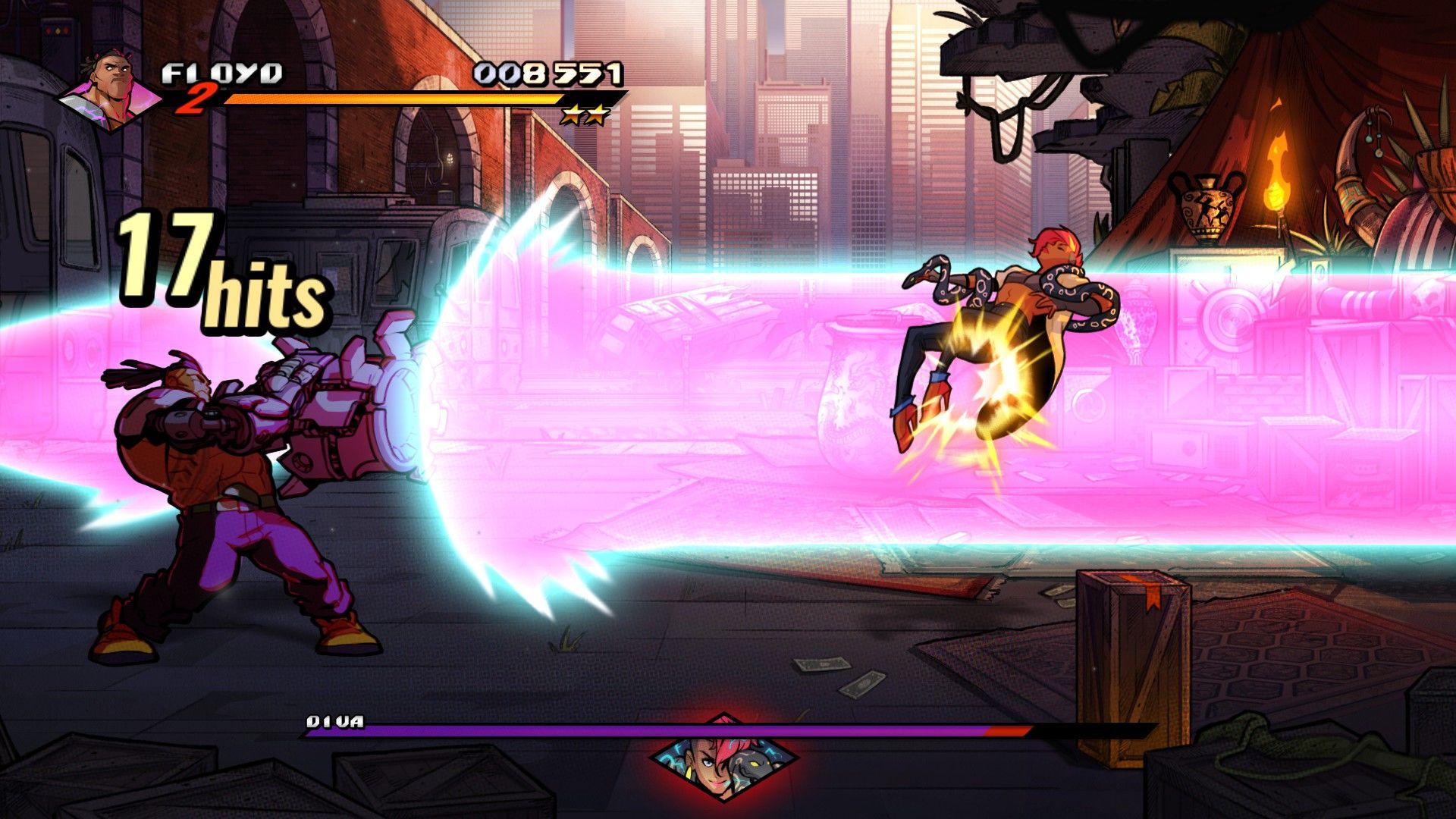 Aside from such devil-inhabited-details, this is very much a known thing. You hit things and GO. But at least it does its job with vigour. For example, new enemies are constantly appearing, with fresh tricks to keep you on your toenails. Take the too-cool-for-school kicklads who slink about with their hands permanently in their pockets, and take flying leaps at you from afar. Or the cops with riot shields, which you have to break before you can land a decent hit (the shields regenerate! Keep up the pressure! They are Halo’s jackals in police uniform!). Then there is the roly-poly man who legs it across the concrete breathing fire (and later on, his belly-flopping twin). You only have your handful of attacks to deal with all this, so the game is really about figuring out how to approach a multi-pronged fight with, say, three knife wielding thugs, two grabby duffel-coat punks, and a blackshirt cop with a taser. 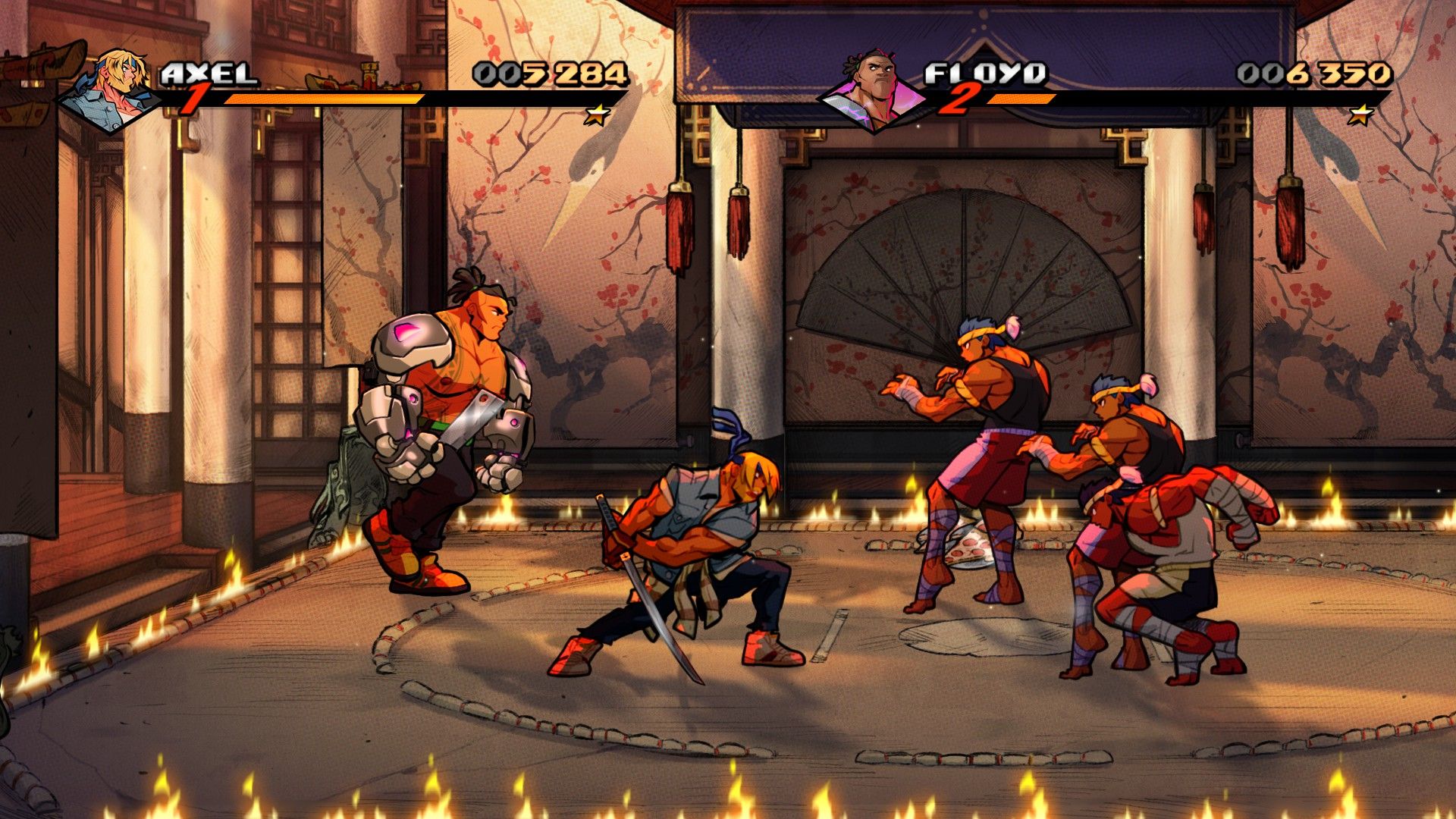 Meanwhile, the boss fights are steroid-pumped mega-enemies all to themselves, with their own scummy grabs and dirtbag tactics. A police chief who charges at you from across the room. A swat commander who calls in missile strikes. An S & M mistress who whips basic henchmen into tough, uninterruptible fists-by-proxy (hmmm). Some of these boss fights revolve around hitting your special attack just before you get bopped, and making quick use of the invincibility frames. Others require deft sidestepping of electronic rapier thrusts. Well, as deft as “sidestepping” can be when the animation looks like you’re moonwalking into the foreground. 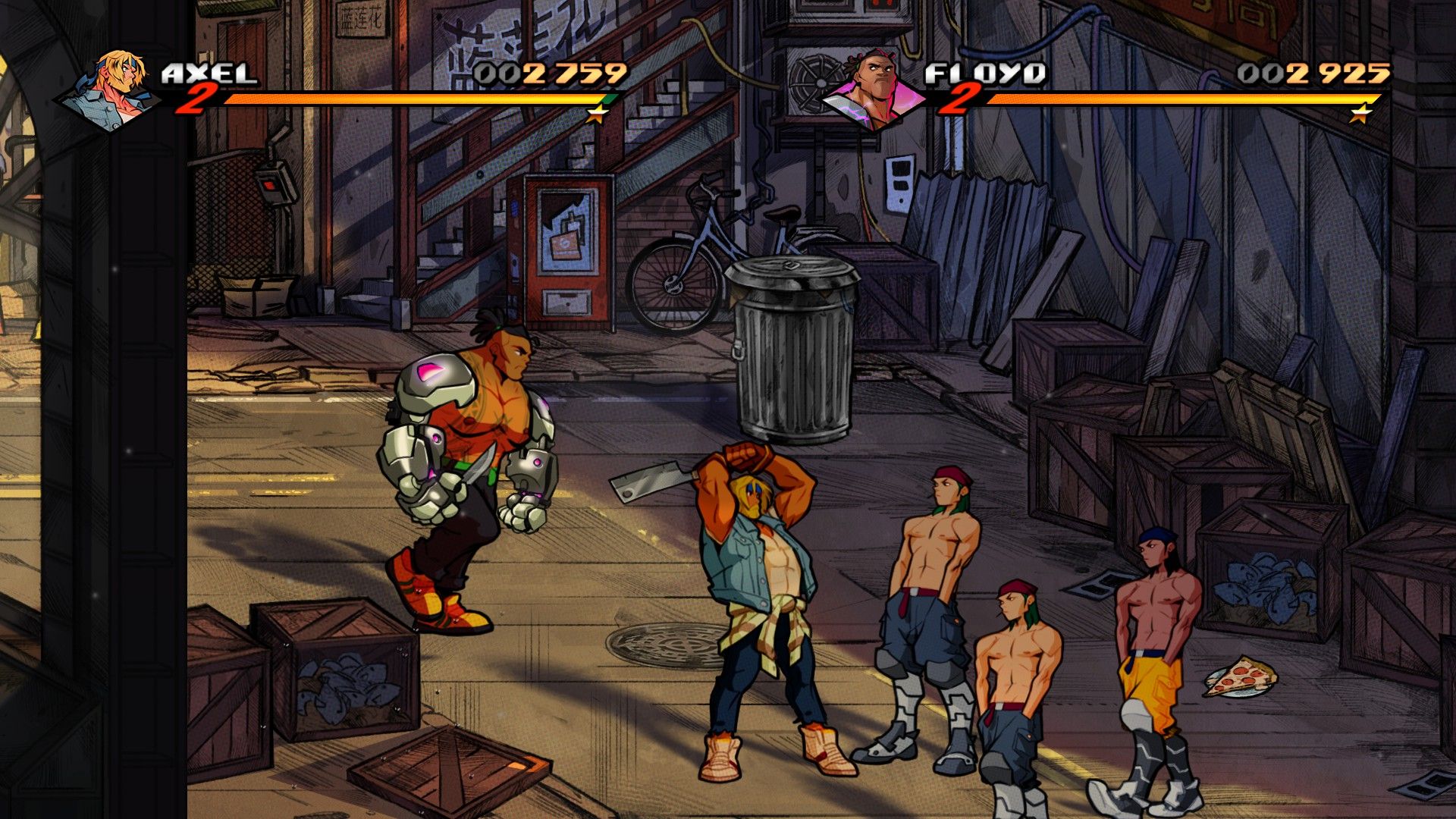 And here is where my tastes don’t align. I find the appeal and action limited, there’s nothing revolutionary or irreverent. No mix-up. In an era when you can roll and dash and savage enemies to pieces in the courageous rhythmic combat of Dead Cells, the denim-clad and boob-tubed fisticuffers of Streets Of Rage will always be throwbacks. In this way, it joins all the other nostalgia fuel continuously poured over our Steam accounts, like so much Sunny D. I can’t be too harsh because of that, as someone who just spent stupid money to play the Resident Evil 3 remake and Final Fantasy VII remake back-to-back. But the difference is that Resi and FFVII, in their recalling of 90s blockbusters, kept the vibe but changed the form. Streets Of Rage 4 keeps both vibe and form, only significantly changing the art style (to the admittedly cool thick strokes of comic books, and a flashy smorgasbord of hot orange punches, hot pink exhibition spaces, and glazed electricity from glinting metal arms – ah, this is martial art). 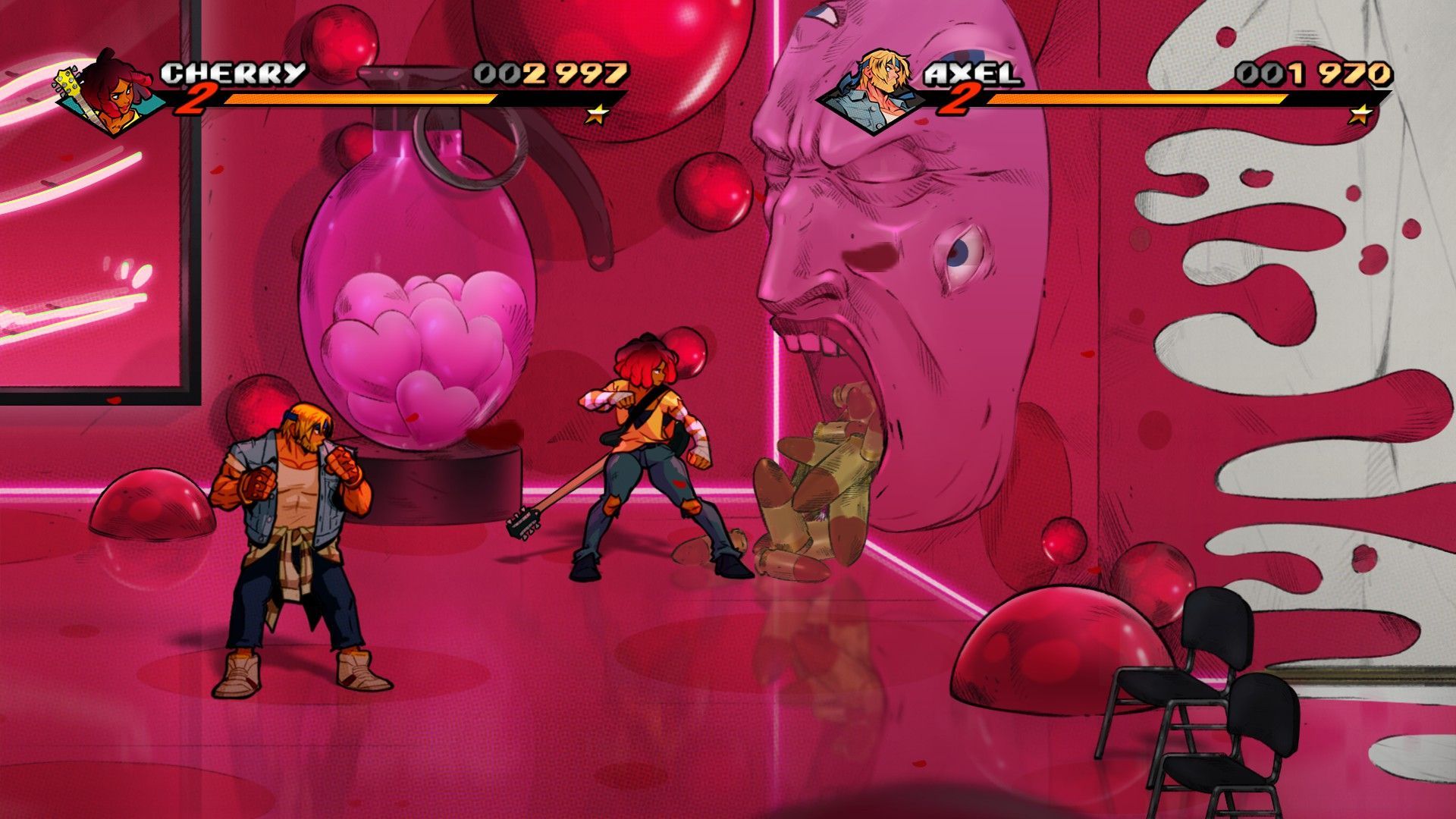 There are other little things to enjoy. They let you change the health-granting food that appears in levels, for example, meaning you can pick up a leafy salad or fried tofu from the wet alleyways, in case your veganism extends like an alien tendril into the screen of your violent videogames, or if you are sincerely worried about the health implications of devouring bin chicken. I’m sure trash salad is much healthier. 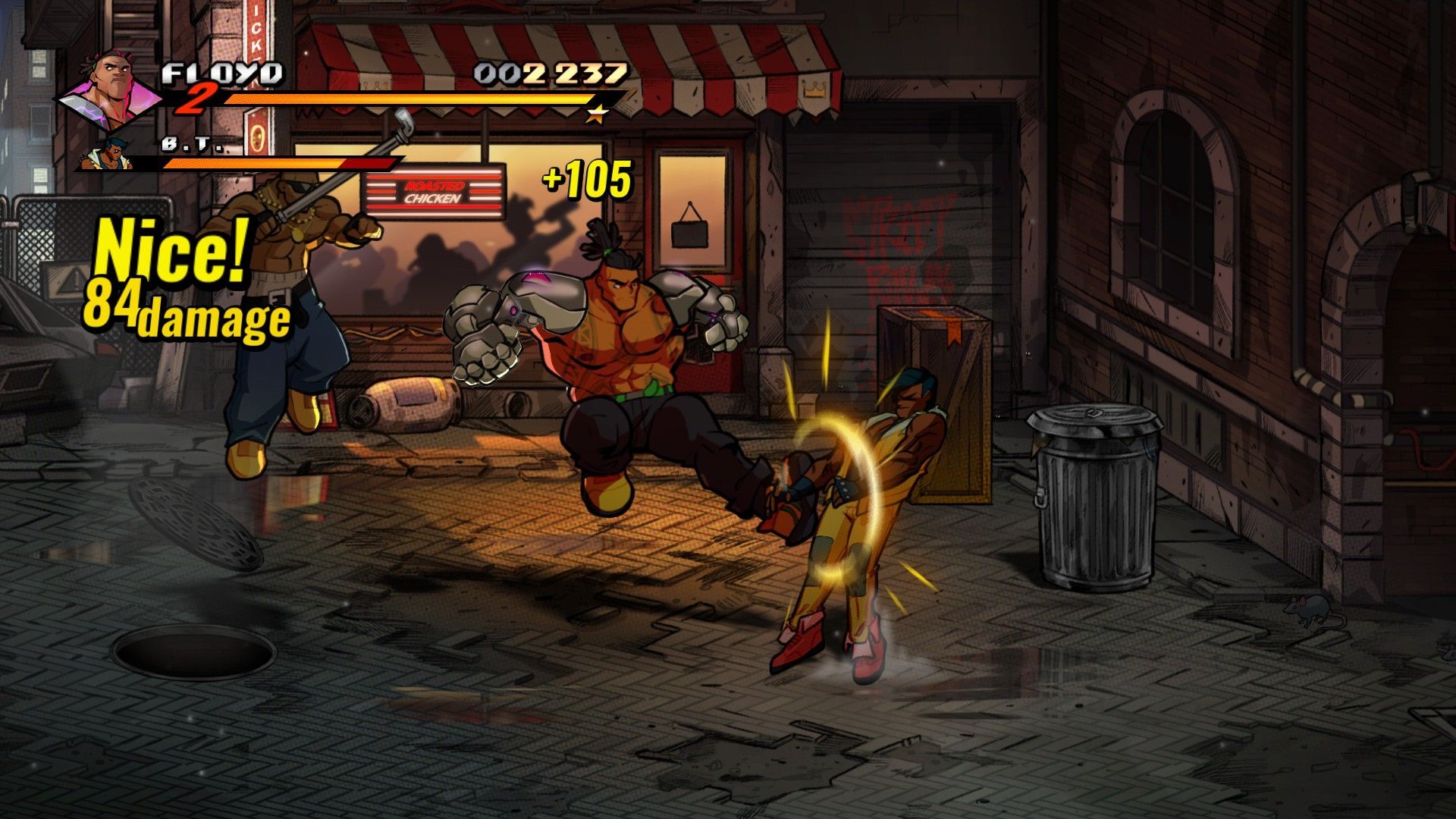 But obviously, this is much more a summoning to arms for fans than a drafting of new blood. Alone, I found it tough even on normal difficulty, in the familiar sense of an arcade machine’s toughness, proving once again that what people are really nostalgic for is pumping quarters into a magical dopamine box. Something I weirdly sympathise with. There’s great catharsis to be found in being pummeled by the same judo henchman three times and saying: no, videogame, I’m not going to let you do this to me, shut up. Although, look at this, at the ‘game over’ screen you can give yourself extra lives in return for a fraction of the final score. I will never turn down such a sweet deal. 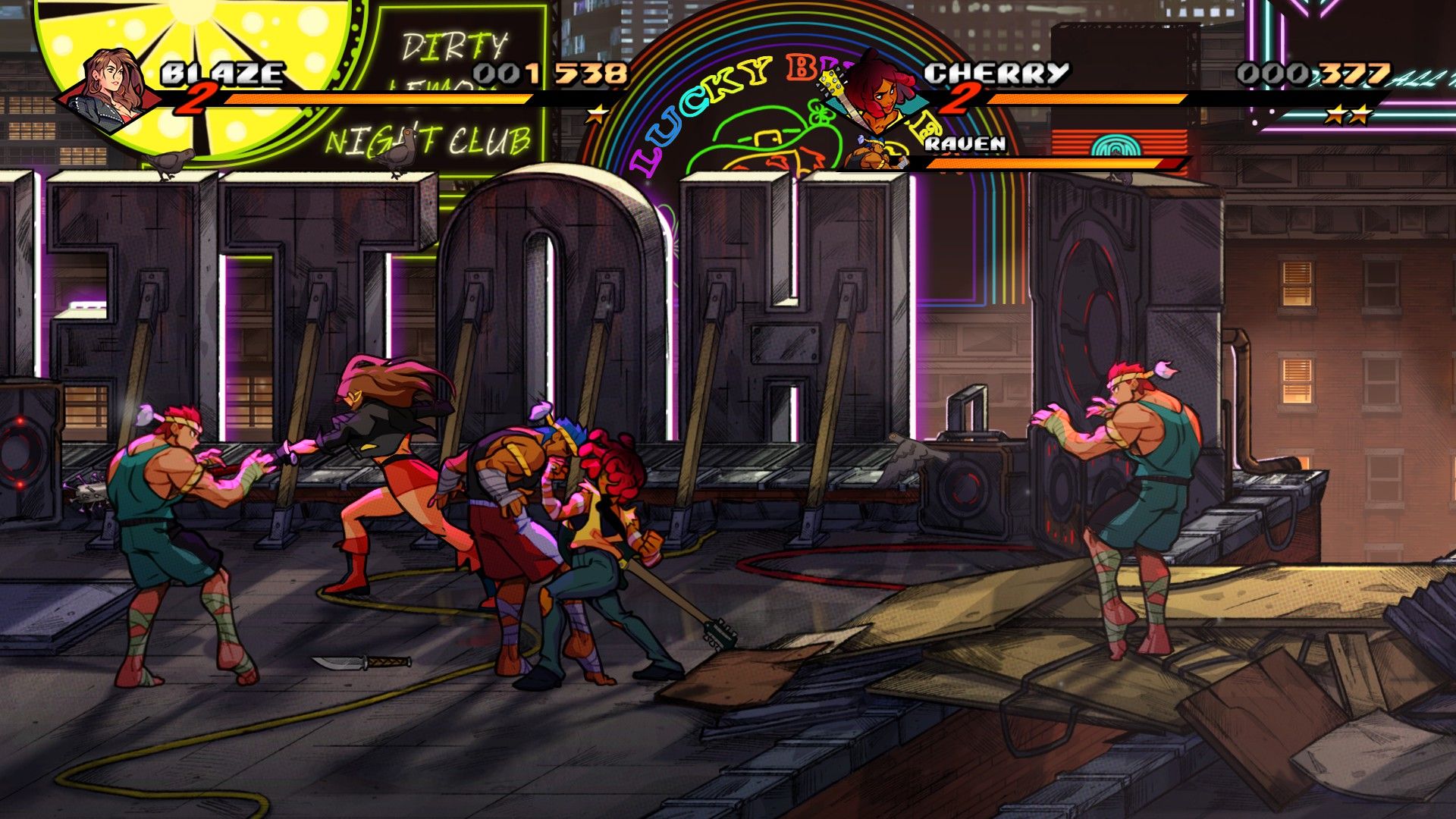 Ultimately, co-op is what you’ll want to play. You can have four players using Steam’s remote play, or two players using the vanilla online co-op. With four punchpals, it is total chaos, especially if you don’t turn off friendly fire, as we forgot to do (Nate sure does love to wollop his buddies). Two players is the sweet spot though. Dave and I chokeslammed our way through the latter half of the game together, occasionally juggling enemies in humiliating combos, but more often doing quick healthbar glances to see who more readily deserves the roast beef (it was me, I always needed the roast beef). It was in that two-player run that I really warmed to it. 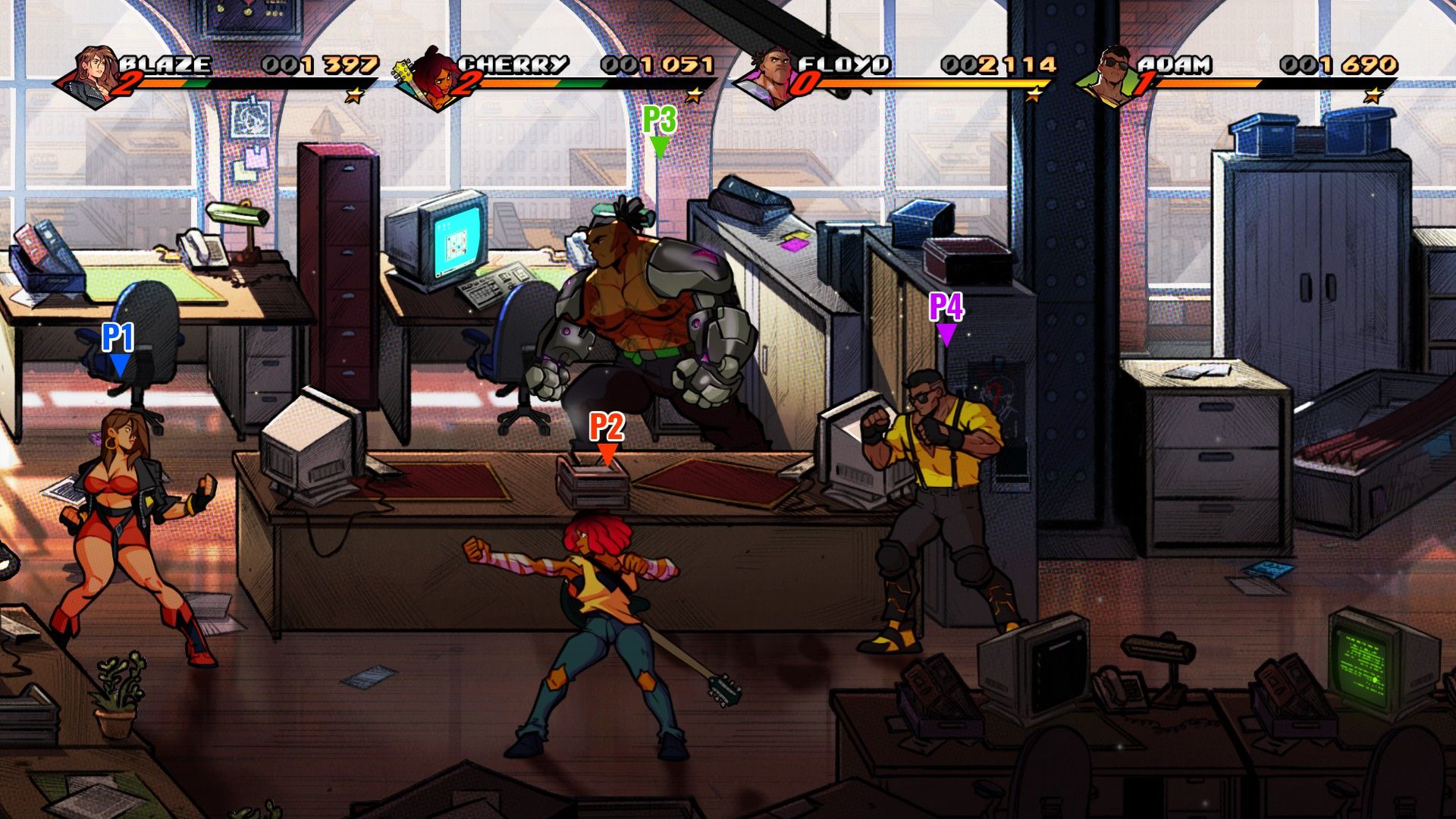 Make no mistake, as a returning biff ’em up Streets Of Rage 4 has some real Talking Heads energy. Ie. same as it ever was. For me, that makes it a one-and-done, rinse-and-never-repeat type of affair. After 26 years, I would have expected more radical changes than a refundable health bar and some superduper attacks. But even I can sense the solace a slick rehash like this will bring to old-school rage artists, given these are the perfect weeks (months (years?)) to mindlessly totter through a city of angry pedestrians with a friend or three, chatting nonsense and eating postbox tofu. 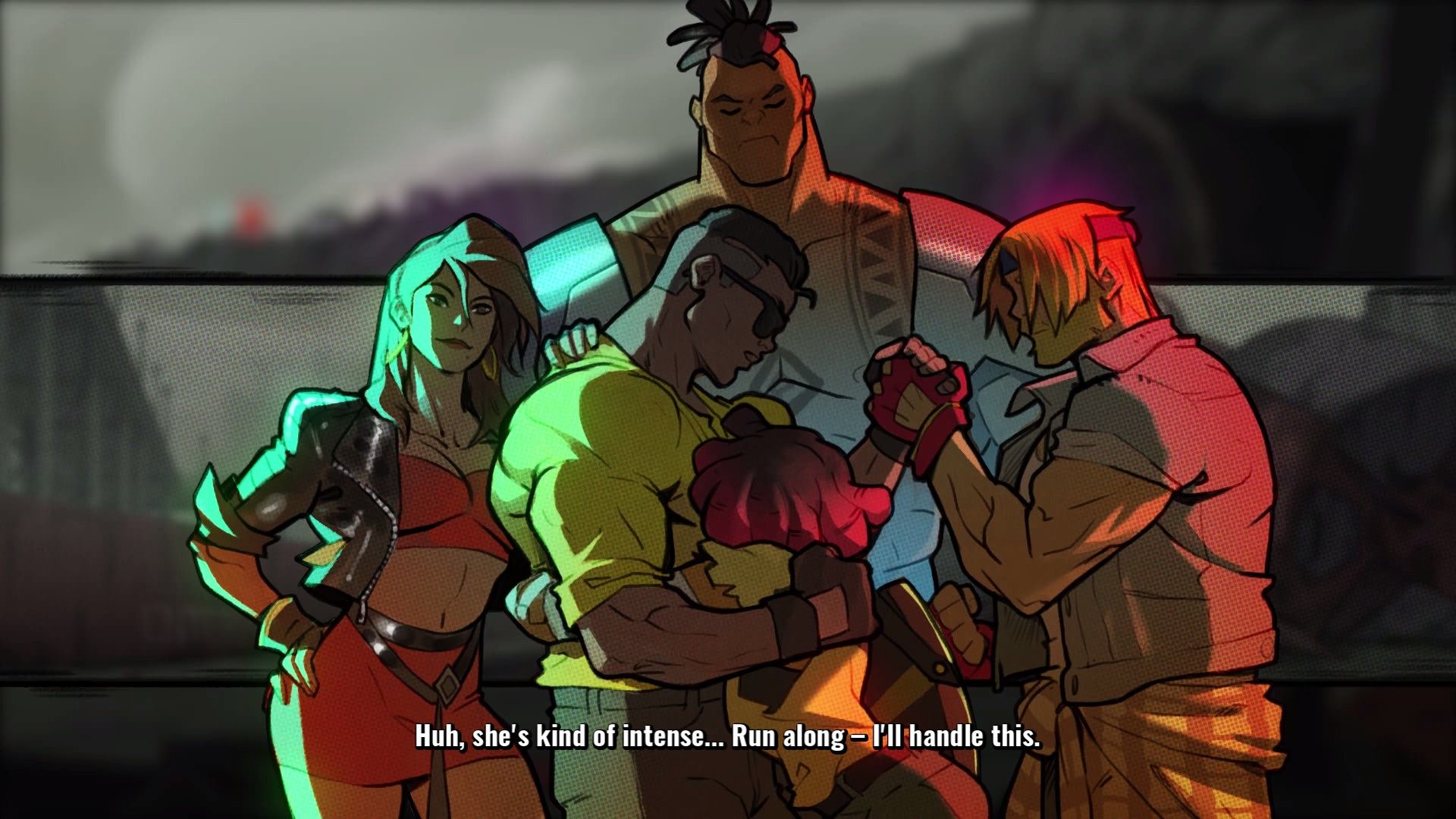 For anyone hoping it would bring a little modern fluidity to a long-stagnant genre, you might have to moonwalk upwards from this one. But for Ragers, it’s a sturdy score-attacking blowout to while away some hours, perfecting your flying knees and enflamed uppercuts, arguing over who deserves the trash salad.

More about Streets Of Rage 4