Now streaming live:
Playing Nice is an irregular series about the power of being not a dick in online games. Today, Sin fails to form a band in zombieless DayZ-alike Deadside.

I forgot the name of Deadside within seconds of closing it. Even looking at its store page raises… not alarm bells, exactly, but some negative assumptions. It looks a lot like a lot of other, not very good games fighting for a place in the ultra-hostile, grim Eastern European PvP shooter leagues.

But what is it really? Well. It’s DayZ again.

Players appear in random, probably forested spots on an large island, carrying almost nothing and with no clear instructions but the implied understanding that someone will definitely try to kill you before long, so you’d better look for weapons and supplies. Food and water are concerns, although not as immediately pressing as finding a gun in one of the scattered villages, farmhouses, and derelict cars. 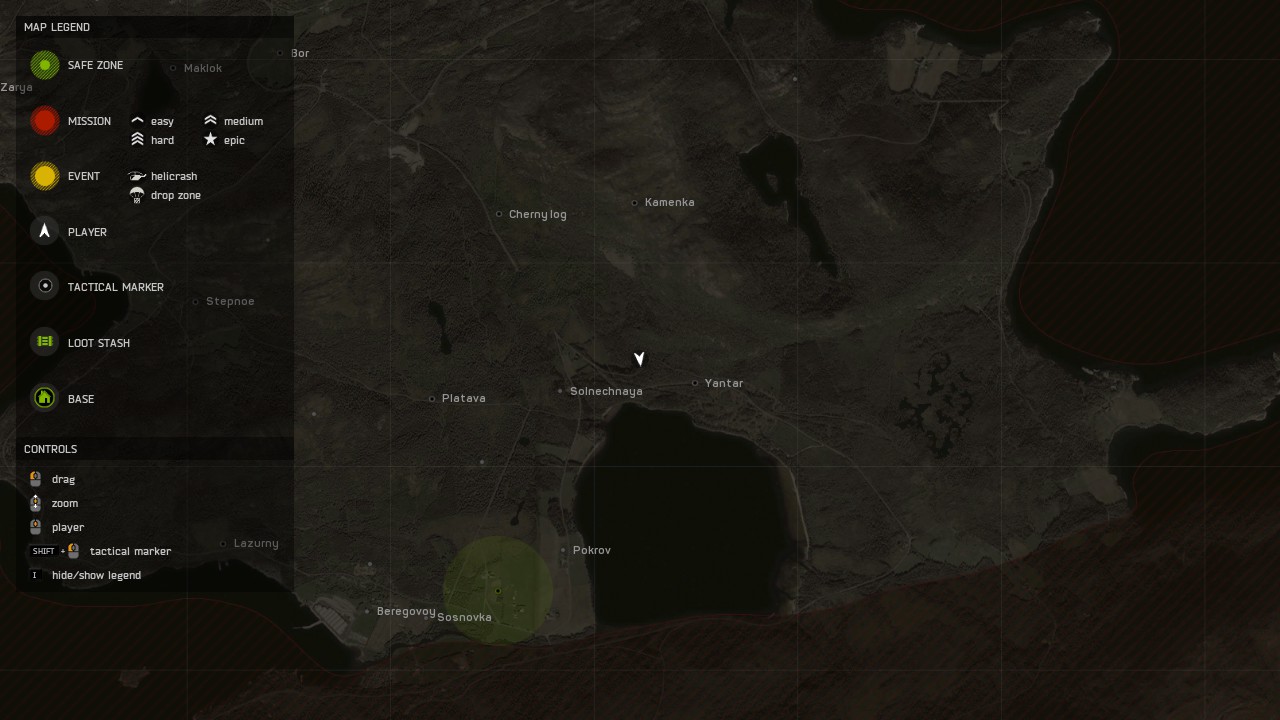 There are no zombies this time, so finding things isn’t too difficult. I was glad for this, because while in theory it’s tense to face a hostile human player with nothing but a pocket knife, in practice you’re so utterly helpless that any early tension is meaningless because there’s nothing really at stake. And on the flip side, I’ve always found the universal omnicide of these games deeply disappointing. Killing starting players is pointless because they have nothing on them, but of course that’s all most players do. But maybe Deadside is different? Maybe this is a good place to be not a dick?

As I ran around the midnight woods, fearful of every shadow, things got off to a surprisingly good start when I said hello to the global chat and someone announced that their dog had died. 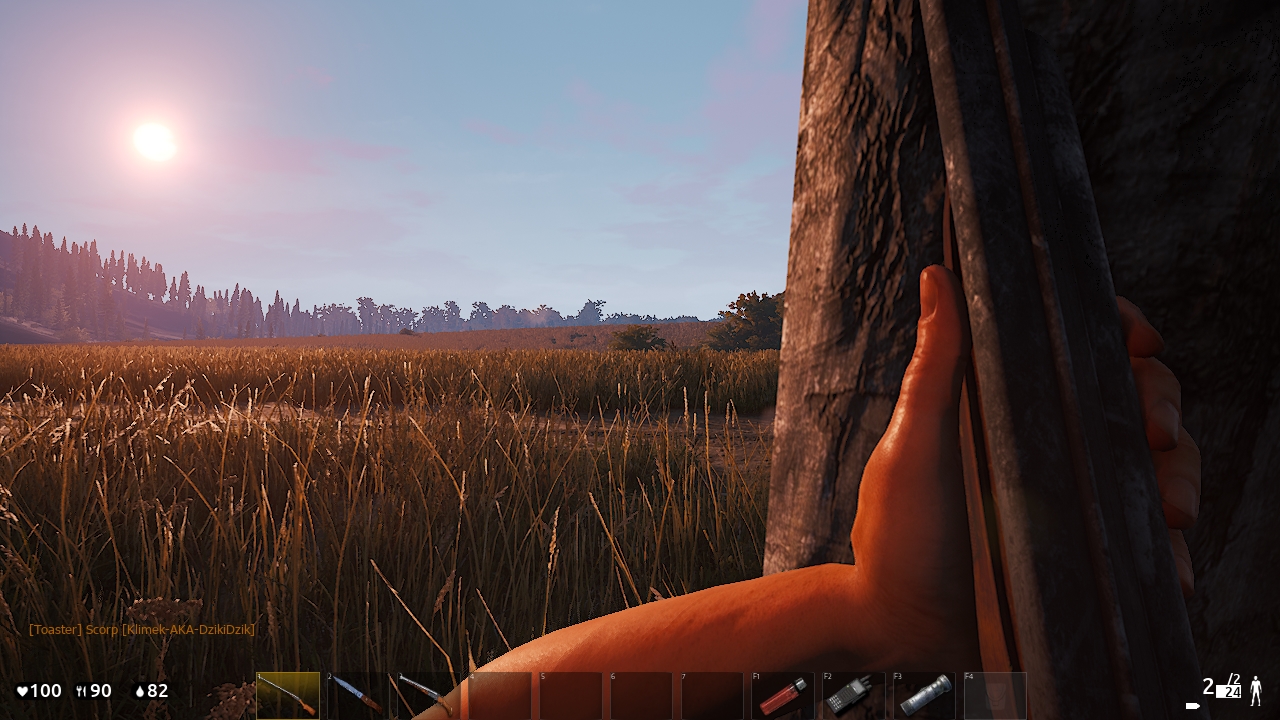 Guns that fire shots. Open field shootouts with a shotgun are unusually enjoyable.

Everyone was nice about it. A good half a dozen random players pitched in to express what felt like real sympathy for this total stranger’s loss. Someone inevitably veered into grief athletics territory by trying to lead a minute’s silence, but the sentiment was lovely.

Then I found a machine pistol at a roadblock. Two, in fact. And another player ran across the road behind me. I had a clear shot but left it, since he probably didn’t have a gun and I saw no need to shoot him, and in fact why not stand back and let him have a gun and we can oh, I see. Oh, he’s stabbing me.

Despite what TF2 has told us, a sneaky pocket knife is no match for a depressed writer with an uzi. I shot him and moved on, annoyed at my now low health. You can carry almost nothing in Deadside until you find roomier clothes or a bag, so there was nothing for it but to jog to the next group of buildings. 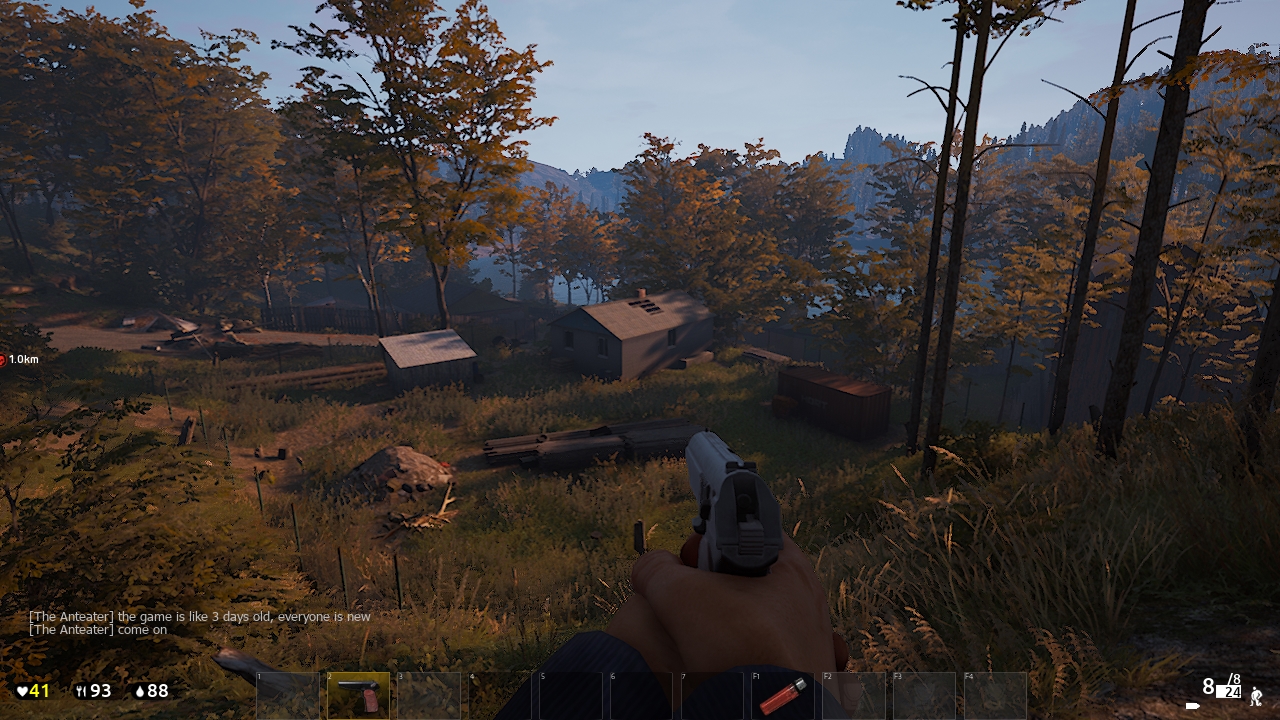 There’s a strangely voyeuristic appeal to watching people fight from a distance.

As dawn broke, I discovered more items there. Mostly rags. Judging by the inventory screen, you can gather handfuls of rags, wood, nails and so on to make healing bandages, clothes, and even construct buildings. But unless you stumble across a duffle bag or backpack first, you won’t be able to carry anywhere near enough resources, and unless you find a decent weapon first, you won’t live long enough anyway. There are periodic notifications that a mission has failed or succeeded, tied to some coloured circles on the map that were never close enough for me to bother with. There are also “safe zones” on the map, which I again never reached. There’s stuff going on for once you’re a bit more established, it seems. But I never got there. 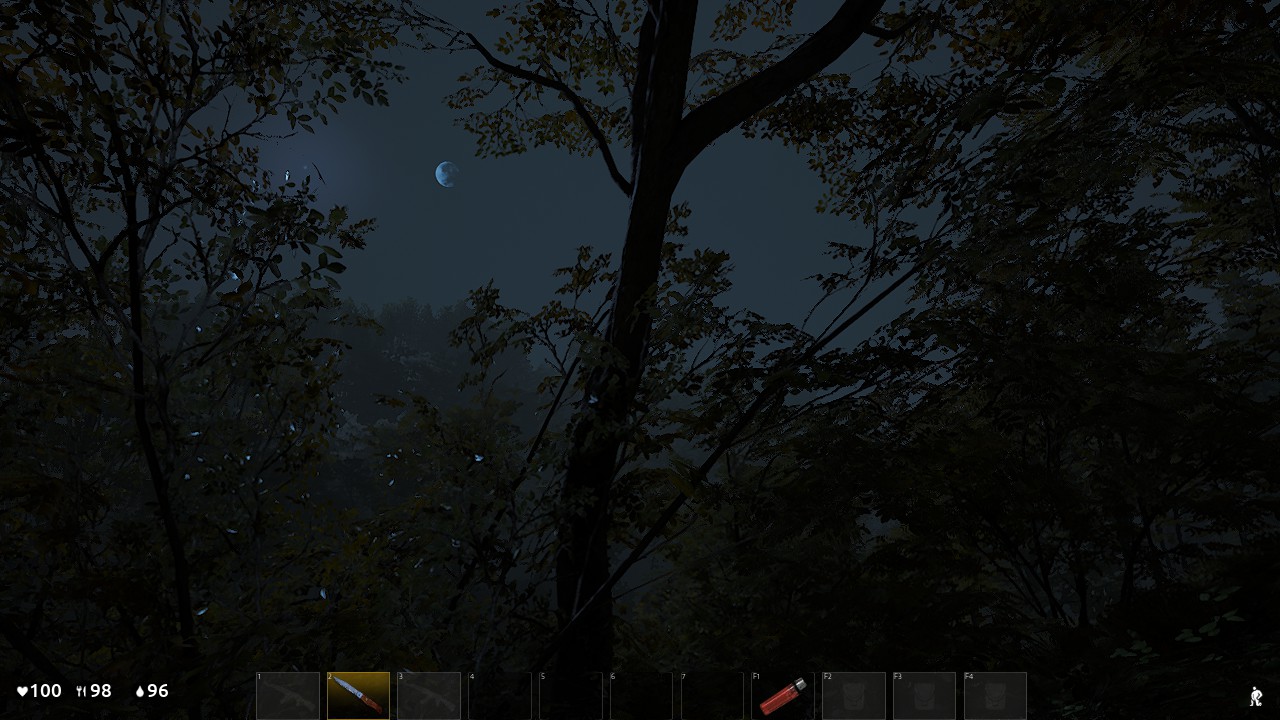 Nights are very dark, but thankfully not literally pitch black like the idiotic ones in early DayZ.

More importantly, nobody wanted to join my band. I offered to pay for the drums, and even freestyled some lyrics in the global chat. But only one person asked to meet up with me somewhere, not even answering when I asked whether they could play bass. This was clearly a trap.

I got shot at some point, stumbling around in the dark. You start with a lighter but it’s basically a “I’m new! Come and shoot me!” beacon. I felt nothing when some unseen gunman killed me. And then the next time, I was that unseen gunman, panicking as someone came into the house I was in, emptying a shotgun into their hips. I apologised over chat but got no response. Forming a band is a lot harder than I’d thought.

Finally, I spotted two players, casually strolling down a main road together. I tried to identify to them over chat that I was friendly and coming out, without giving away my position. No response. Well, okay. I followed them at a distance, offering to help. Nothing.

Eventually I realised they were bots, which is a mixed feeling because bots are definitely a good feature in Deadside, but it’s also quite sad that the only way you’d ever get people calmly strolling through the woods together, enjoying the scenery and setting, is by inventing them.

The bots were then attacked by a couple of players. I ran in to help them, figuring action would earn more trust than banging on about an awkward third verse. Dead. Still, it was a nice shootout. 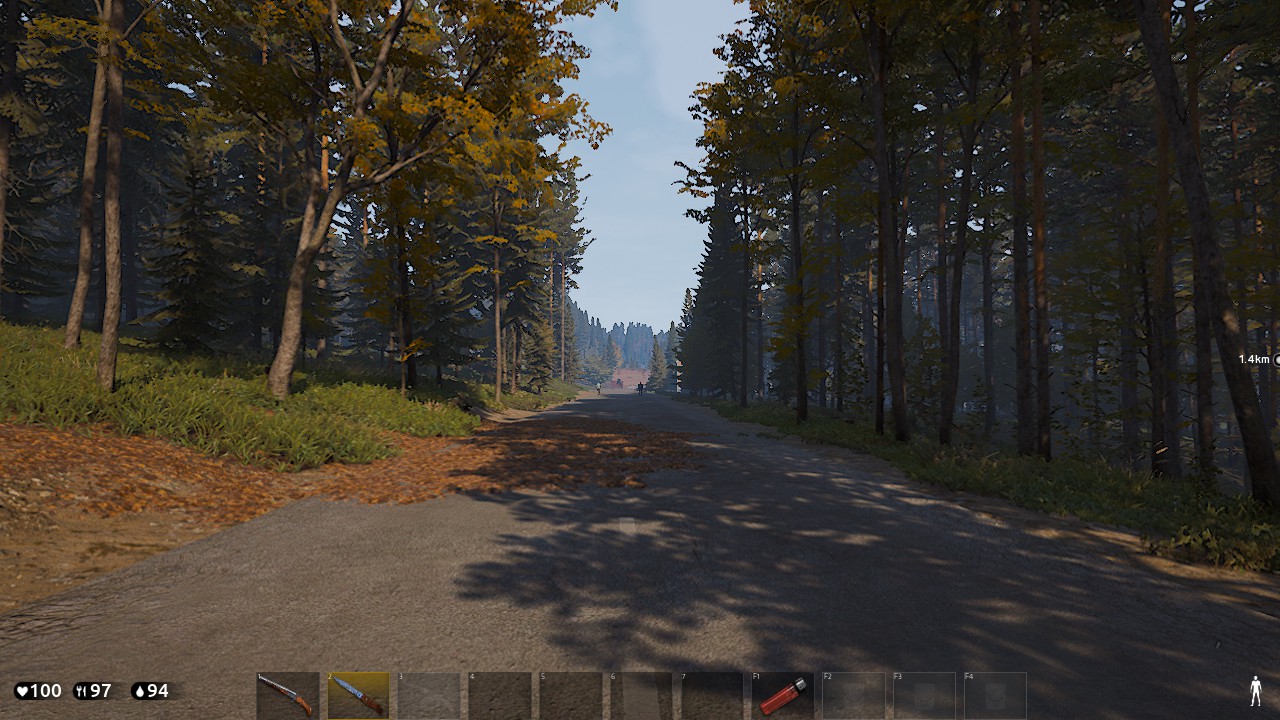 You can just about see the two bots ahead. It’s a nice day. I’d go for a walk too.

That’s pretty much how Deadside went for me from then on. I’d find a gun or two, try to be friendly, and have to shoot people who ignored my overtures and tried to stab me. The shooting is pretty decent – I particularly appreciate that the double-barrelled shotgun is a workable option at medium range, and the source of most of my kills. Pistols too are fairly deadly, and I had some great shootouts against players and bots alike that I would have lost if I hadn’t kept my cool. But the big question is how to get past the early stages of stumbling around in the dark repeatedly dying and passing over piles of resources you can’t yet carry, and whether it’s actually fun to keep playing after that stage.

On my last and longest life, I’d shot several bots and a couple of players with a pistol, shotgun, and then found an SMG. Not only did I find a duffel bag, opening up a revolutionary seven inventory slots, but I then found an axe in the corner of a field. 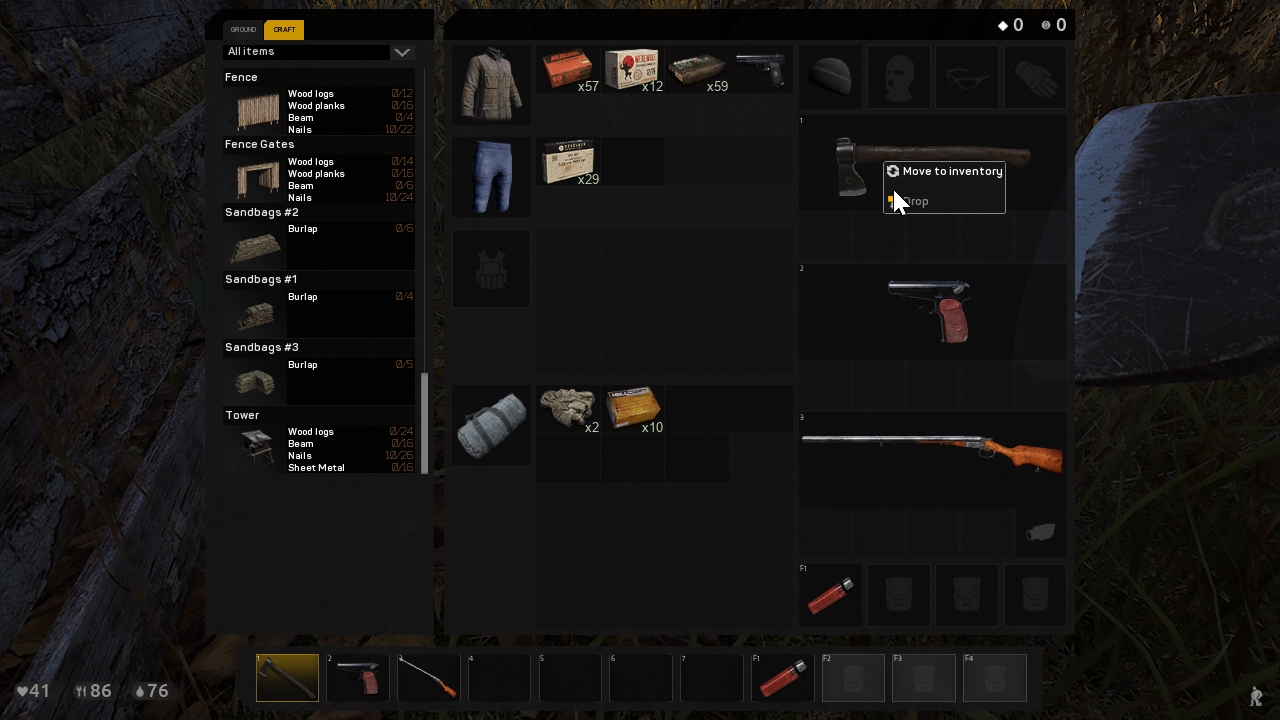 The impossible, game-changing technology of a sack.

I got excited, because who knows how important an axe could become? I asked the chat, and of course got no answer. So I asked myself: is this important? Is this how we get wood in the game? Have I stumbled across the next step in oh never mind, it’s crashed. It crashed several times, and each time it locked me out of the server I’d been in with an error message. Welp.

Deadside is actually quite solid, considering how easy it is for Dayz-alikes to fall apart simply through lack of players even if they’re good. It’s quite atmospheric and even pretty in an alpine sort of way. I quite liked the shooting, and it was easy enough to find guns to allay the frustration. I was able to get started and survive for a bit without having to waste time starting over and over again, although that could of course change as the player base grows, and the obsessive players study the most efficient paths through the design and eventually trammel everyone down the same narrow path as every other online shooter if they’re to stand a chance. 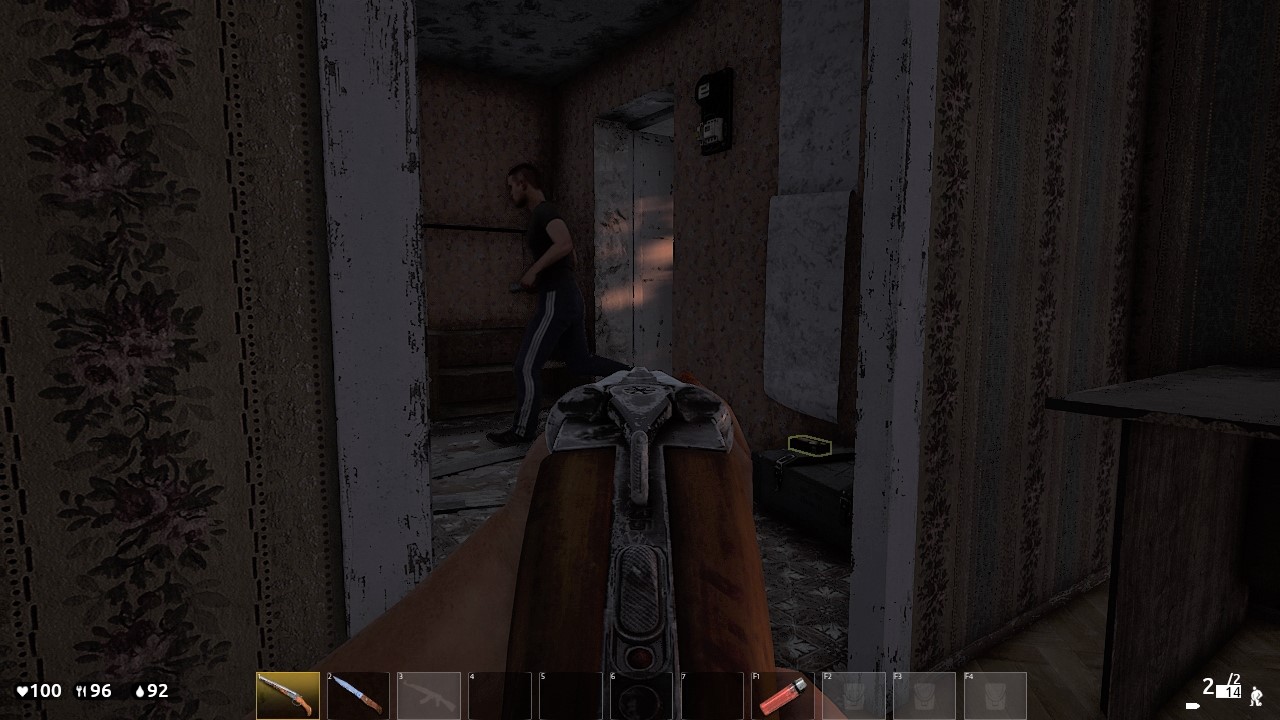 A split second later I outright murdered this guy in a panic. I The abyss stares back (brightness adjusted image).

But it needs something more if it’s to work for me. The bots are a great touch and welcome alternative to tired zombie business. They introduce an element of chaos by starting open firefights and hunts rather than just mindless ganking. They’re not unstoppable either, and it anything are easier to fight than the erratic movements of real players. That suggestion of base building might offer a longer term experience than I got to see, but so far there’s not really anything to do besides hoping to luck into the right equipment so you can kill everyone you see. If that’s your bag, this is worth keeping an eye on.

Being not a dick rating: I wasn’t personally targeted, and the general level of abuse seemed relatively low. But there’s little room for much beyond random murder, leaving us at a dissatisfying 3/10. Rising to 5/10 for the dog thing.