Now streaming live:
Signs Of The Sojourner review
A bittersweet deck-building card game about connections and empathy rather than winning.

Language: it’s a funny old game, innit? I don’t mean the languages of different countries, either, I mean the different ways of communicating within that. From all the different regional names for this small but noble beast, to whatever your family calls the TV remote control (ours was “iffer-offer”), to the fact that UrbanDictionary is a thing that exists at all, it can be hard for people to understand each other even when they’re talking the same language.

Enter Signs Of The Sojourner, a deck-building card game with a story about growing up and outgrowing home, where the cards you play stand in for conversations. This game: it’s a funny old language, innit? 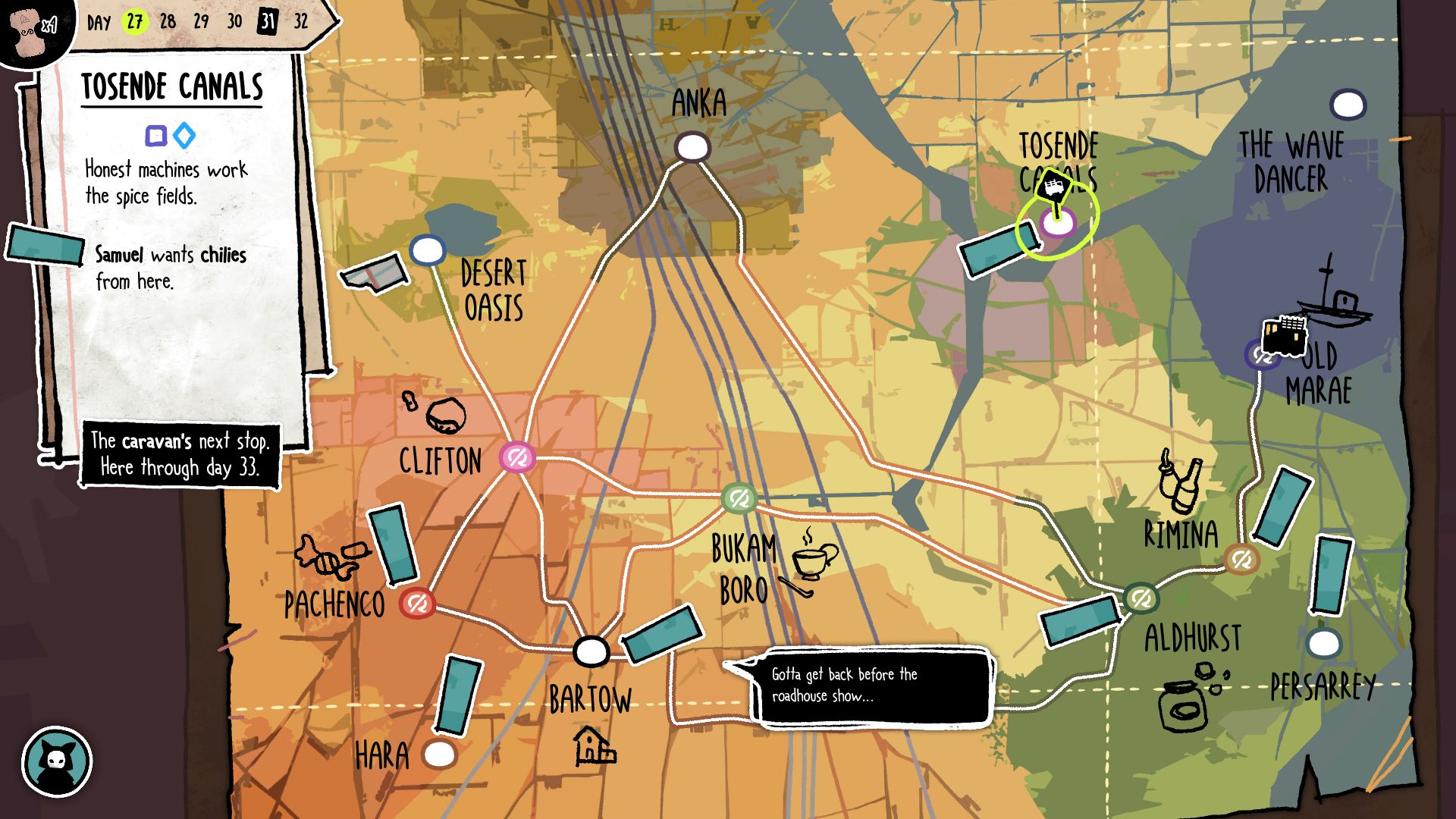 You, unnamed protagonist with what look like cat ears, live in a world maybe a step removed from our own, where travel is treacherous and goods and people are moved in a caravan that loops around once a month(ish). Your little home town, Bartow, is in danger of falling off the route, following your mother’s recent death and the bodega she ran going unstocked. So, you have to join the caravan and get more goods – chocolate from Anka, matcha tea from Bukam Boro, paintings and bottles of wine from slightly bougie art town Pachenco – to make Bartow a place to visit.

See The World, They Said
The caravan has a strict schedule, but towns can throw festivals or events outside of that, giving you the chance for unique encounters. Each time you turn up in a town, you get a neat little description of it, plus an overview of who’s there to talk to. Though you don’t get big animated cinematics, it really paints a picture. I’m pretty sure I know exactly what Pachenco would smell like in real life.

As you get more confident you can leave the caravan route and plough your own furrow, as it were, but your choices can have knock on effects, so you weigh them up carefully. Early on, a mate back home asked me to pick up some more roasted nuts, but they’d all been stolen and taken to a nearby Oasis. Trying to get them would mean breaking with the caravan, losing time, and I might not even win the nuts back. But coming home with them would really help things along back in Bartow. Hmmm. Plus, the longer you’re away from home, the harder things get, because you get knackered out. You pick up fatigue cards, blockers that can’t match with anything. That makes it harder to have good conversations, and you need to do that to get things to sell, or learn more about your mum.

And this is where the cards come in earnest. It’s an ingenious system that gets more clever the more I think about it. 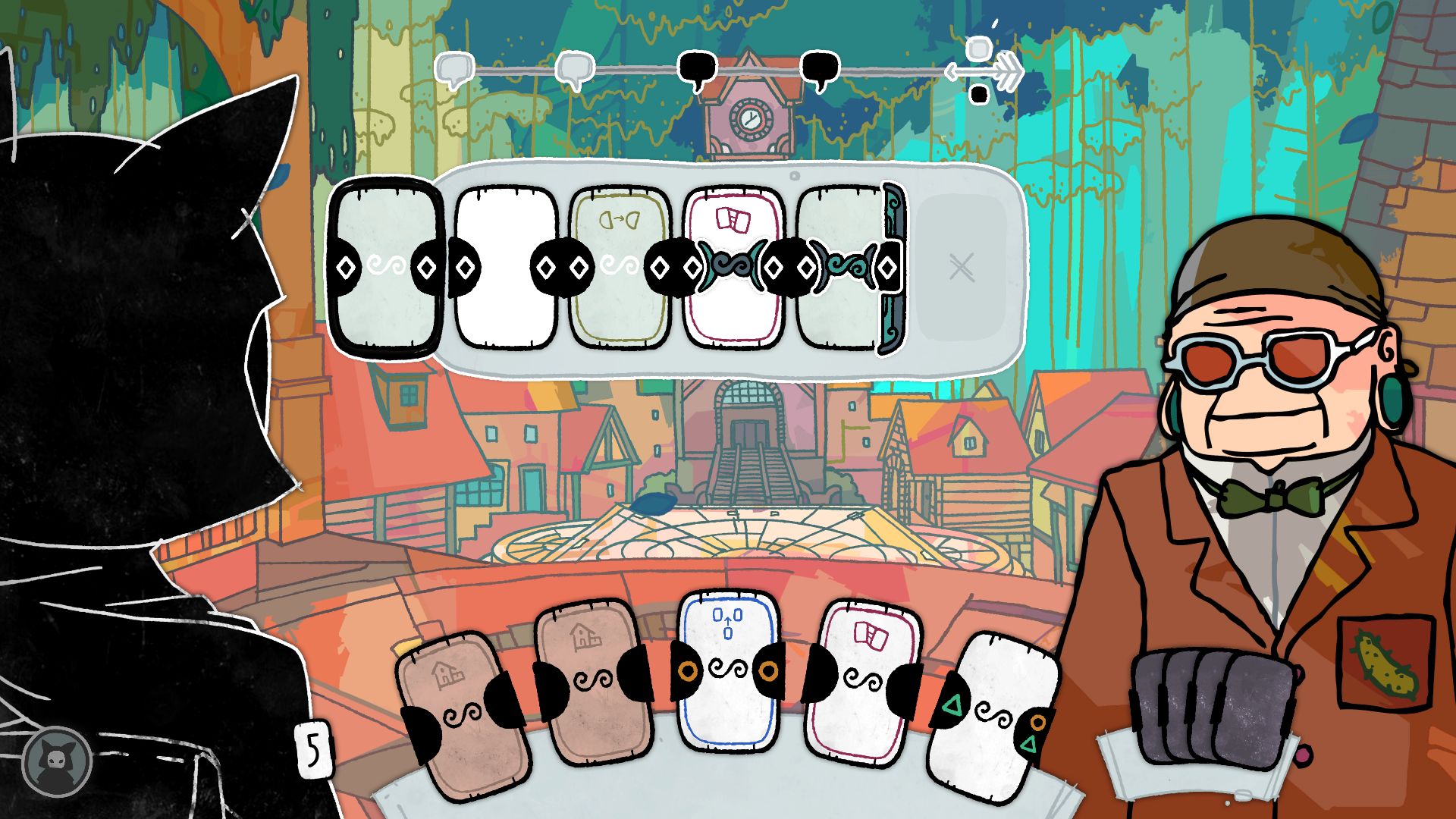 I’ve just completed one successful chain with this fellow who sells pickles – all the cards light up in a very satisfying way.

I don’t normally go in for card games because they just seem a bit mercenary, but unlike yer Hearthstones or yer Runeterras, the card games in Signs Of The Sojourner represent “having a chat”. You don’t actually see the conversation you have, you don’t read the words, but a round of cards results in either a good outcome or a bad one.

Your goal is to make a connection, metaphorically and literally. You and whoever you’re talking to take it in turns to lay cards. They’re similar to dominoes – they have two sides, with a coloured shape on each, that you have to match up in a continuous chain. So if my partner plays a card that goes GREEN TRIANGLE – ORANGE CIRCLE my next card needs to, ideally, have an ORANGE CIRCLE on the left side to continue the chain (of between three or six, depending on how difficult the chat is going to be). A successful chain gives you an agreement, and a broken one gives you a disagreement. The conversation ends when you’ve maxed out on either agreements or disagreements. 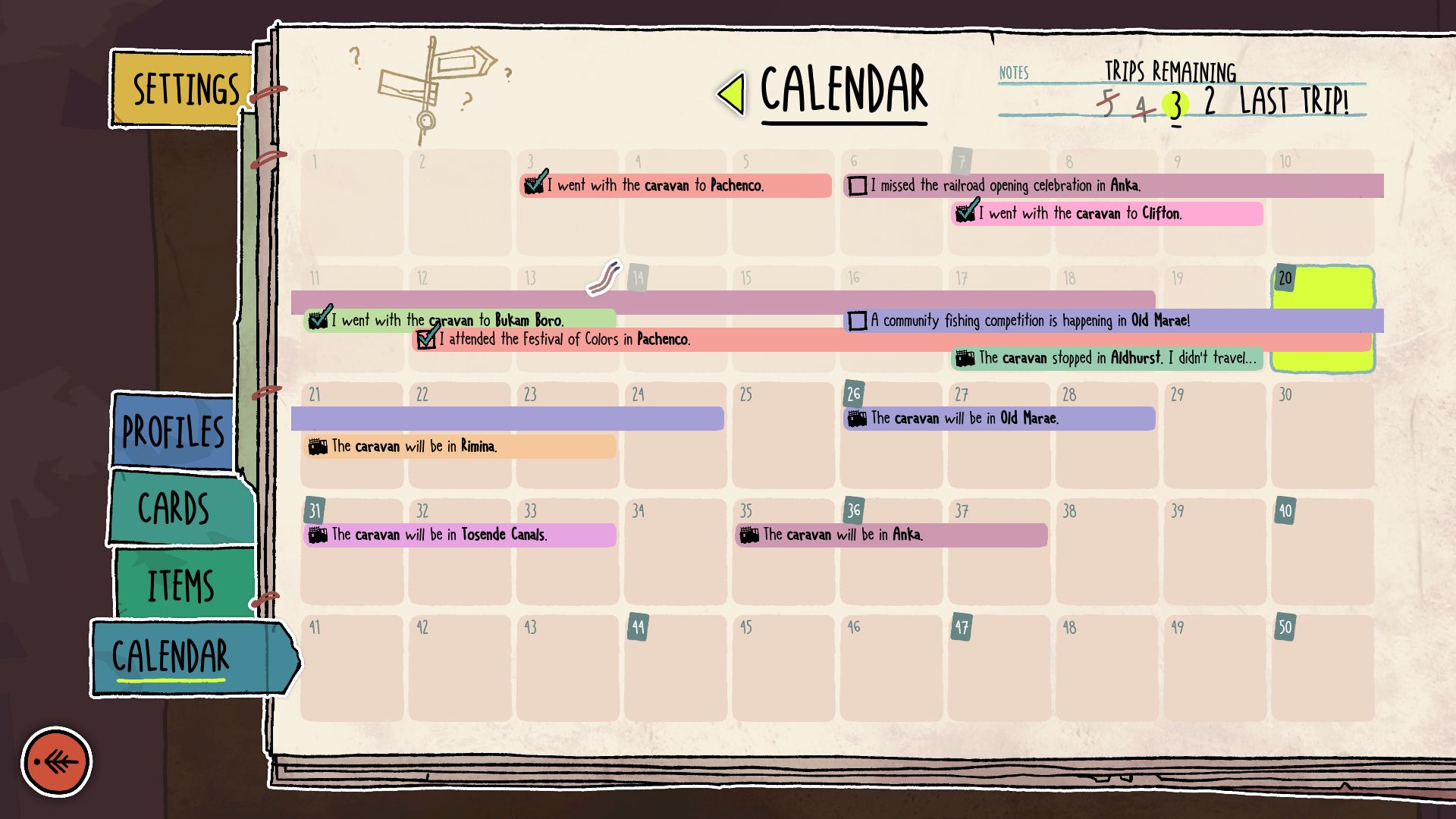 Why Can’t We Be Friends?
I say partner rather than opponent because you’re not trying to beat each other. You’re actually working together, and one of the special abilities, Observe, lets you see what cards they have in their hand. After all, nobody wants to get into a massive argument, do they? And by figuring out the effects and abilities you both have, it’s possible to have a pleasant chat even if you play a bunch of cards that don’t link up properly. Another metaphor, mayhaps.

With me so far? It starts off quite simple, but it becomes more complicated. After every conversation you get the chance to discard an old card from your deck, and pick up a new one garnered from the experience you just had. These often involve abilities attached to cards, allowing you to control your chain a bit better. A card with Chatter lets you play another card immediately after it, while Clarify allows you to insert the card anywhere in the chain, and Reconsider reshuffles your deck to get a new hand. Accommodate cards are blank and clone the one played just before, and playing the same card as your partner results in an accord, which locks in your progress.

Every place you chip up in has two symbols that govern the kind of cards the inhabitants will have in their deck, so you know ahead of time if they’re likely to be a GREEN TRIANGLE/ORANGE CIRCLE town or a BLUE SQUARE/LIGHT BLUE DIAMOND type of place (and these also relate to ways of being – empathetic, direct, that kind of thing). So as you go, you try and shuffle more of these cards in your deck, so you can do well talking to different people. 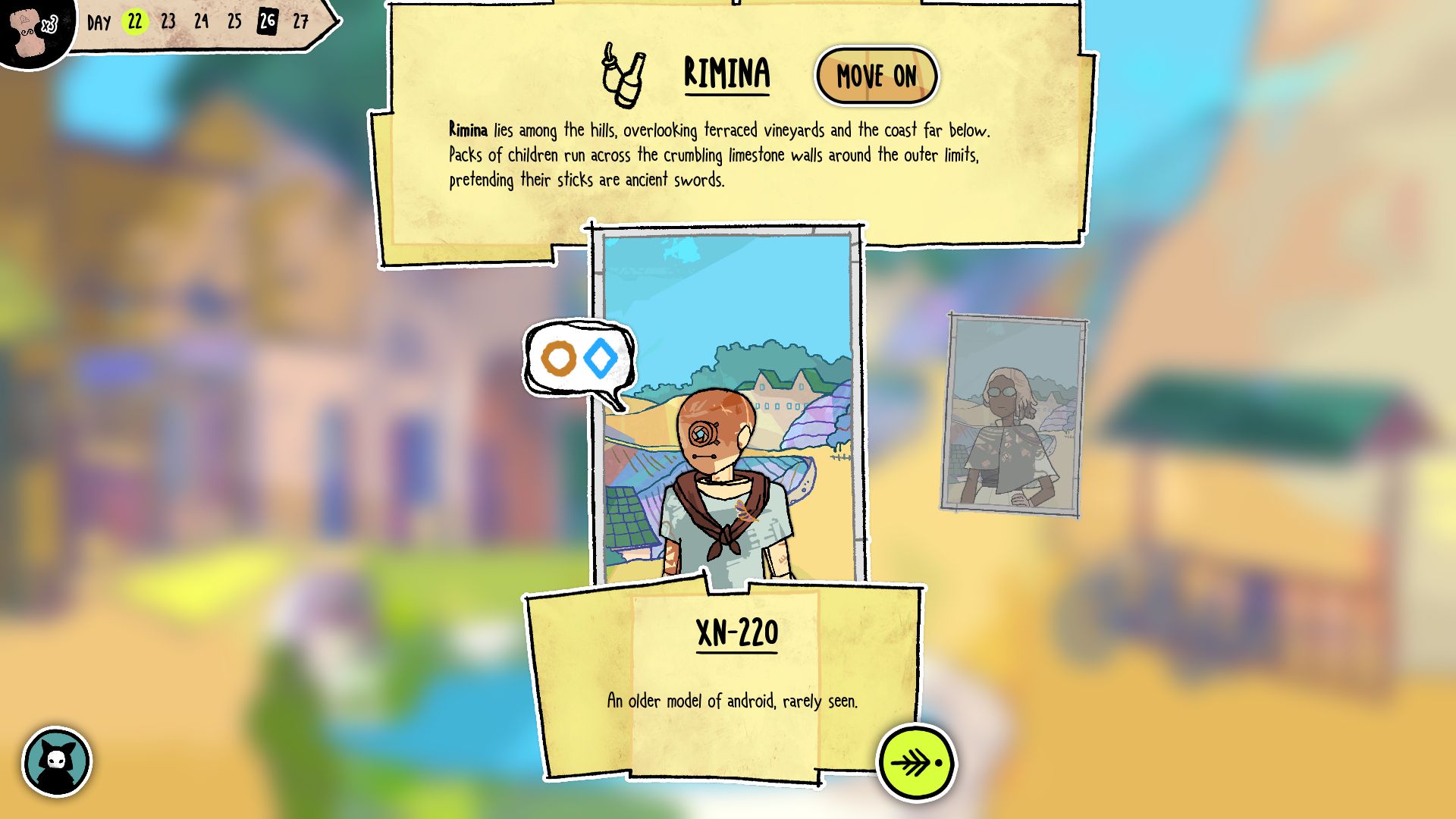 Except, after a while, you realise that the deck is really you and you’re learning different ways to behave from the experiences you’ve had. Your travels are literally changing you as a person. And then you notice that the way you behave is more different from how you behaved at home, the further away from home you are. And eventually the conversations you had locally, which were so easy to start with because you all spoke the same language, are getting harder and harder, because you’ve swapped out so many cards – you’ve changed so much – that you don’t have as many of those GREEN TRIANGLE/ORANGE CIRCLE cards to fall back on. And your best friend from childhood gets cross with you, even though you found some scrap for repairs to his coffee shop.

Aha, yes. I get it now. There’s a mounting anxiety that maybe you’ve outgrown things. You change so much in such a short time outside Bartow, that maybe it isn’t worth staying. All this through cards and some clever halves of dialogue! Well played, Echodog Games! 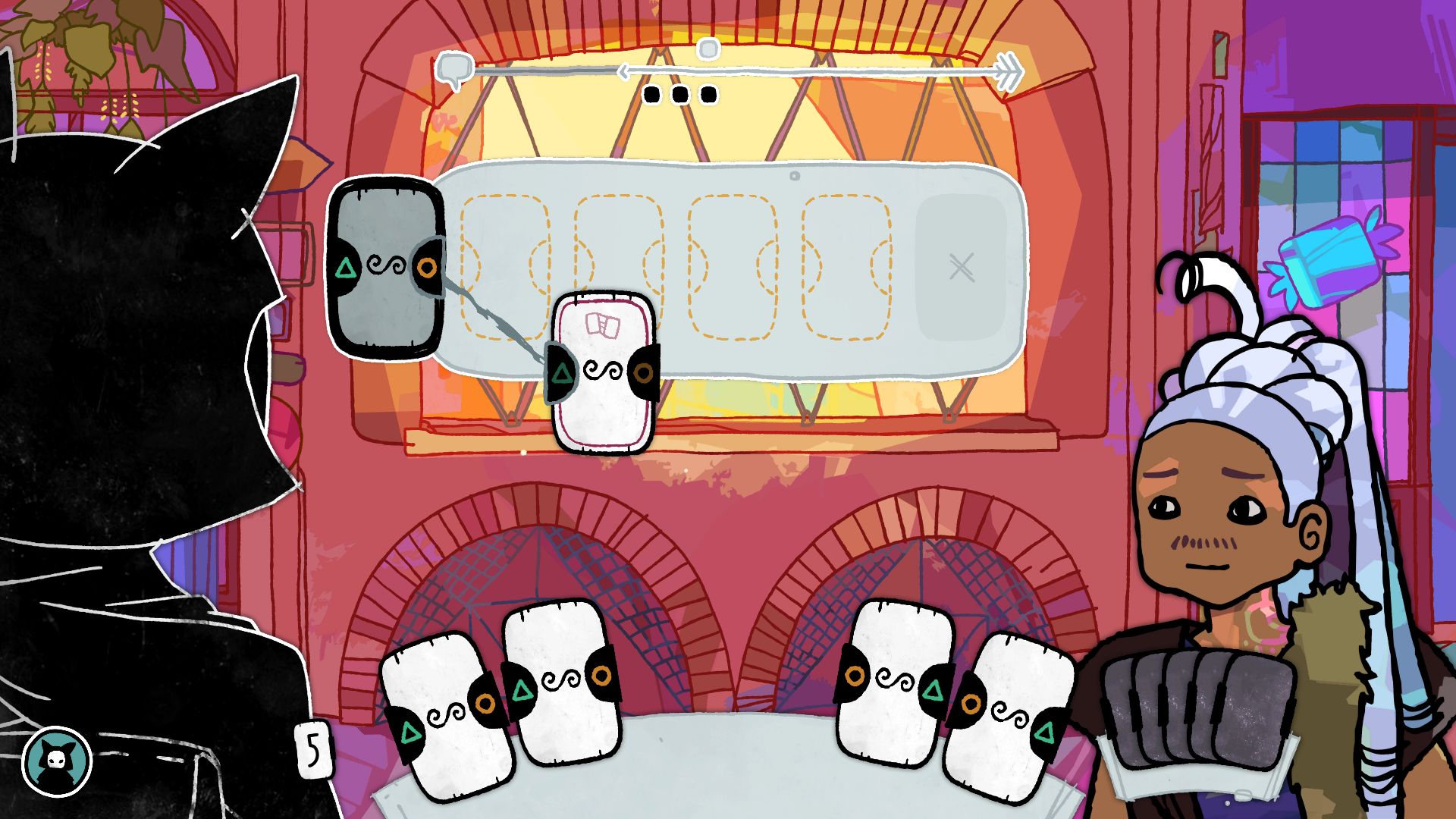 But the thing is, and maybe this is me just not being good enough at card games, that eventually all the conversations get too hard. On the one hand this is fine, because Signs Of The Sojourner is sort of about life, and you can’t win at life, nor should you think of it that way. But on the other hand, the bittersweet story – meeting people, making new friends, losing old ones – is a lot of this game’s appeal, and I got the sense I was missing out on loads of it because I wasn’t getting through conversations successfully. Especially so because you only get one chance to talk to someone on each trip. Tosende Canals is guarded by someone who searches your truck and won’t let you in if you don’t get through the conversation, and I think I failed it what felt like a bajillion, jillion times.

I don’t think that it should sacrifice everything so I can get the equivalent of a 360noscope 100% cheevo on a gentle game about connections and empathy, obviously. Just maybe a thicky mode for tired thickies that makes all the length of all the chains one card less than they would be – a gnatz easier. Because sometimes I don’t want to choose between a nice story that makes me feel like I accomplished something sometimes, and a clever analogy giving me a capital e experience. I have, to borrow a metaphor, a lot of Fatigue cards in my deck some days.

Tagged with Echodog Games, feature, review, wot i think, Signs Of The Sojourner.

More about Signs Of The Sojourner