It was only a matter of time before Amazon properly jumped into the gaming space, and here we are with their very own multiplayer hero shooter coming out tomorrow. Developed by Amazon’s Relentless Studios, Crucible is a new free-to-play third-person shooter. I’ll be the first to admit that those words put me off at first, it’s not easy for these sorts of games to stand out amongst the rest. But having seen some gameplay firsthand and had a chat with the developers, I’m actually really excited about Crucible and what it’s bringing to the table.

So, first things first, what are we actually going to see tomorrow? Well, in Crucible players are plopped on a planet to complete various objectives against enemy teams. What we’re in for seems like a weird amalgamation of MOBA-style strategy mixed in with third-person combat. It’s not the sort of hero shooter where you constantly need to be with your team – it’s the opposite most of the time, actually. Most matches there’ll be loads of times where you just venture off on your own, killing computer enemies to level yourself up. You need to level up, you see, to increase things like your health pool and damage output, so you’re prepared for when you do get in a team fight over an objective.

And these objectives change from mode to mode. Heart Of The Hives, for example, puts you in two teams of four, competing to collect Hearts – which, as you might have guessed from the name, you get by taking down big structures called Hives.

Next up is the last-man-standing mode, Alpha Hunters. This one is essentially Relentless’ take on the battle royale, chucking eight teams of two onto the planet of Crucible while the map slowly zones you in. There’s a cool twist to this one, though. As you play in pairs, if your partner gets eliminated, you can temporarily form a new team with another player who’s also been widowed. If you get to the final two this alliance will have to break down, of course, but it gives you a better chance of getting to the end than you would have on your own.

Lastly we have Harvester Command. This is your typical “hold the most control zones to rack up points” kinda mode. It’s 8v8 with five Harvesters to take control of, which leads to a whole lot of fighting all across the map. I think I’m most excited for this one purely for how hectic it looks.

These are the only three game modes we can expect at launch, but from the sounds of things there might be more added a little later down the line. The developers will be rolling out content updates seasonally, with plans to release “at least one really exciting new feature or gameplay experience” each season, too (which could be anything from a new hunter, to a new game mode).

When the game comes out tomorrow, it’ll start in its preseason which will run for eight weeks, followed by the proper first season after that. Normally, seasons will run for about 10 weeks, and, as we’ve all come to expect now, each will come with a new battle pass and set of rewards for players to earn.

Relentless mention that, while they already have some post launch plans, they’ll be keeping an eye on the game’s community to see what players want. They’ll be doing smaller patches every two weeks to address things like bugs and game balance, too.

“One of the biggest things with this type of online game and this type of experience, is that we’re asking a lot of the players to invest in this game,” they said. “When you do that, I think it’s really important that players feel like the game is constantly getting better, that there’s a really open communication channel with a developer team in a sense that everyone’s in it together and that the game is always evolving and improving.” 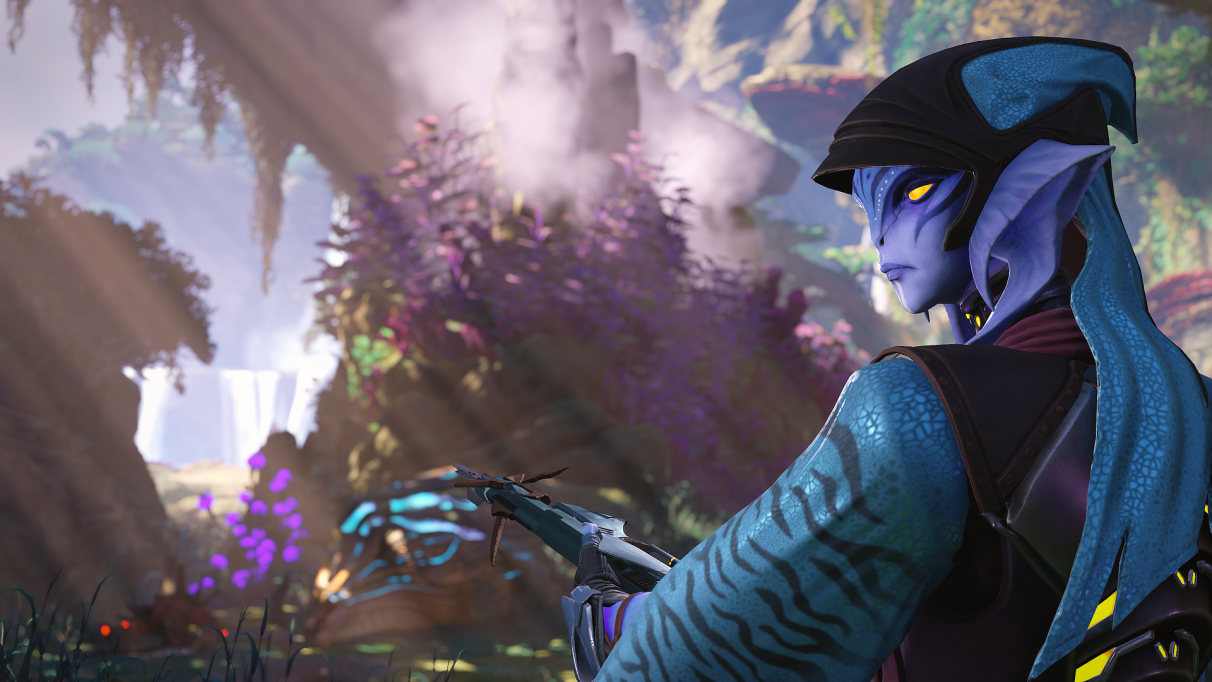 This blue lady is a sniper with a grappling hook. Now where have I seen that combo before…

For some players (let’s be honest, I mean players like myself) one of the quickest things to get invested in will be the characters. In Crucible they’re called hunters, and there’ll be 10 of them at launch. They’re all designed to be effective by themselves without the backing of a whole team – as mentioned before, they’re gonna be on their own a fair bit.

“The first thing we set out to do regardless of game mode was to make characters that felt as dynamic as any other hero games, from MOBAs to, you know, Overwatch, and other hero shooters. But, at the same time, to create characters that are so self-reliant,” they said.

“In the team modes, it makes our combat a little bit more dynamic because people can do all the different things and all the different roles for your team. I think that’s a really important thing because it allows players to choose the character that they love and for the other people playing with them to work with that choice, because all of it goes together.”

Each character does still have a kind of role to play – some are more suited to long and mid-range combat, while others are designed for more close quarters brawling. I’m a big fan of this spiky lad with the giant axe. He’s one of the melee-focused characters, and watching him absolutely charge at you is quite terrifying. Reminds me a bit of the Krogan from Mass Effect.

There’s a pretty diverse set of aliens, humans and robots for players to choose from, and having so much variation was a pretty important factor for the devs from the outset.

“There are gameplay benefits to that when you talk about things like diversity and uniqueness in terms of silhouette,” they say. “We want it to be something that whenever you’re watching your friends play or your favorite streamer play, we want you to be able to quickly filter and understand what’s happening at any time or distance and who the characters are.

“But in addition to the gameplay side of it, diversity was super important to us about creating characters that would give players someone that they can truly connect to – whether it’s diversity in their abilities and the way they play the game, or diversity and gender, race, ethnicity, body type, personality. We wanted to make sure that for anybody who plays this game, we’ve created a hunter for them.” 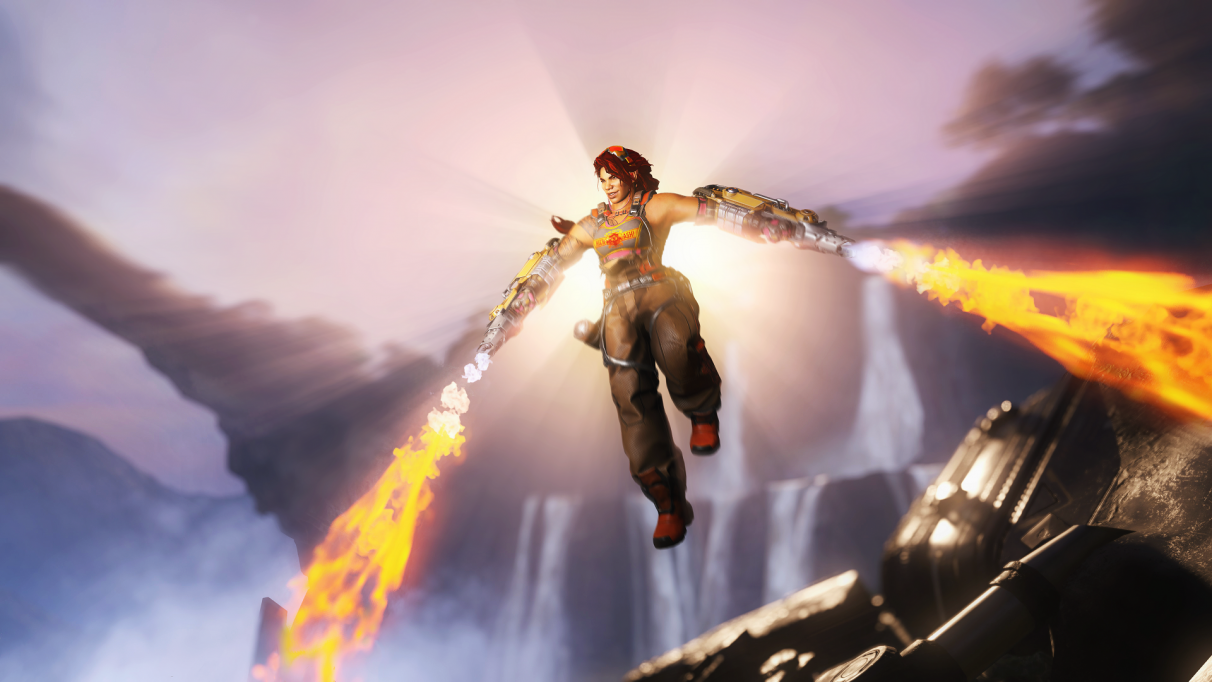 Relentless went as far as to make sure the voices for their characters were as genuine as possible, too.

“We really valued authenticity when it came to casting. We have a lot of characters of colour, and various genders and we wanted to be sure to cast actors and actresses that match their characters. “

They did lose me a little on the follow up to this, however, because instead of telling us about these authentic characters of colour, they talked about the casting for Bugg, the robot.

“Bugg’s actor is a real robot,” they told us. “We actually sent out a lot of auditions. We did our same audition process for Bugg that we did with all of our characters. We got adults, children, men, women, you know, all auditioning for this character, and in the end we decided that the Amazon poly voice that we had been using for prototyping had more character than any of them, so we ended up just sticking with it ’til the end.”

Cool. So, uh, sorry to all the voice actors that went for the role of Bugg, you lost that job to a literal robot. 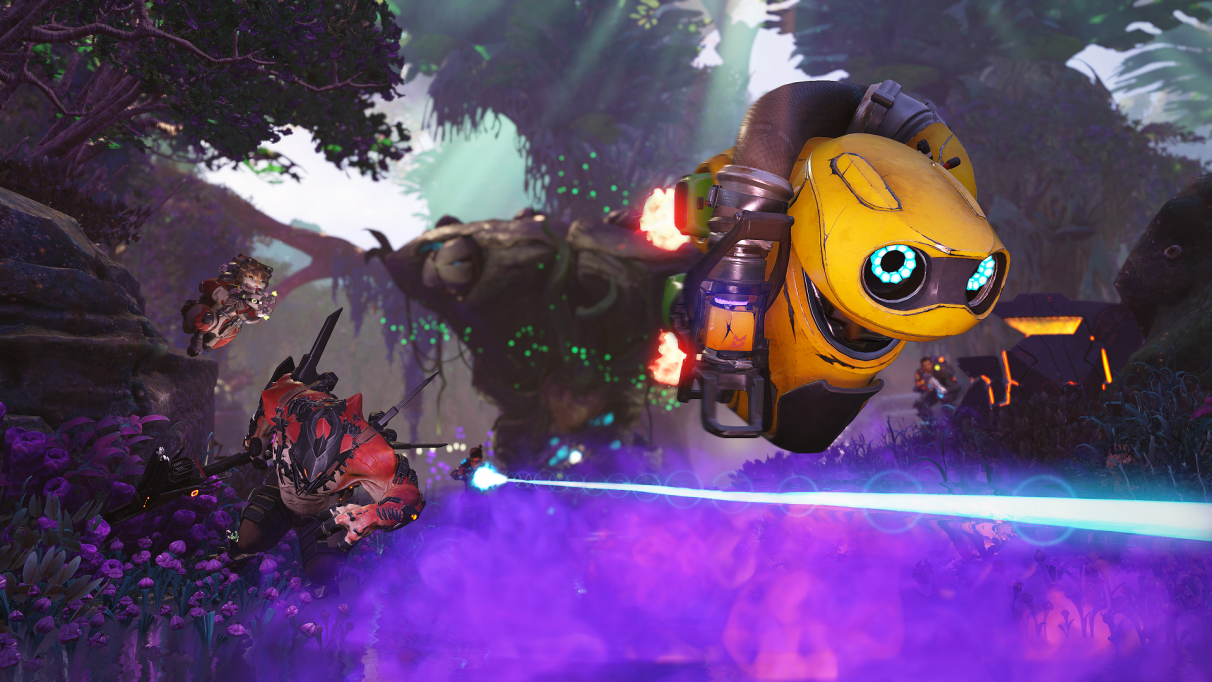 Looks like if Wall.e and Eve had a kid.

As with other live service games like Apex Legends and Warframe, I’m told that Crucible will have some sort of underlying narrative to add a bit of flavour to the world. The developers understand that not every player cares about that sort of thing, and they don’t want to upstage the gameplay. But for players who are interested in the story of Crucible, narrative designer Samantha Vick tells me there are plenty of clues to go looking for.

“We’ve peppered our map with environmental narrative elements that hint at the planet’s past and future,” she said. “There are a lot of interesting things to discover, and we’ve already got alpha players hunting down clues and comparing notes, trying to piece together their own theories.”

Similarly to Overwatch, characters will have downtime conversations during matches, giving players an idea of how they get on with each other. On top of that, each character has a first-person monologue that can be unlocked piece-by-piece as you play them.

“They’re unlocked at the end of a match, same as other types of unlockable rewards,” Vick says. “These monologues allow us to tell a story with the character’s voice, and give us a ton of room to explore their backgrounds, their worldviews, and a glimpse into the larger Crucible universe. Over time we hope to release more of these monologues, both to flesh out the characters more and to tie into events that we plan to introduce in the game.

“Speaking of those events, it seemed a shame to us that multiplayer games often introduce an interesting premise, some interesting characters, and then…that’s it. They aren’t allowed to grow or progress in their plot in the same way that the best single-player games do. So while I can’t give specifics just yet, we hope to keep players’ interest long-term by progressing and evolving the story of Crucible over time.”

Crucible is free-to-play and launches on Steam at around 8pm BST tomorrow. You can find out more about the game over on the website.