Caustic, despite his premium status as one of the characters in Apex Legends who must be unlocked through Legend Tokens or Apex Coins, was always one of the most underperforming Legends in the game thanks to his bulky hitbox. But nowadays, Caustic is much tankier and deadlier than he ever used to be, and there’s no better time to start learning how to play as him. Our Apex Legends Caustic guide is packed with tonnes of practical tips and strategies relating to each of his abilities, and much more.

We’ve got a fair amount to cover with this Caustic guide, despite his abilities all seemingly revolving around the same principle. To skip to a particular section of your choice, simply click on any of the below links.

Caustic excels in close-quarter situations. His abilities all centre around his patented Nox Gas, which slows, blinds, and damages enemies caught inside it, and reveals their locations to Caustic through the smog. So he’ll always be at his best in confined spaces; underground areas, indoors, or in the final circles. Out in the open, his abilities are far less effective unless you adopt a very aggressive playstyle when encountering enemy teams.

There are several downsides to playing as Caustic compared to the other Legends. For example, he doesn’t have a dedicated method of escape, or any way to increase his movement speed. Instead, his abilities all focus on locking down or zoning an area. But on the other hand, these abilities also allow Caustic to play much more independently, engaging multiple enemies at once, backed up by the protection provided by your Nox Gas Traps and Nox Vision.

Caustic hitbox vs other Legends 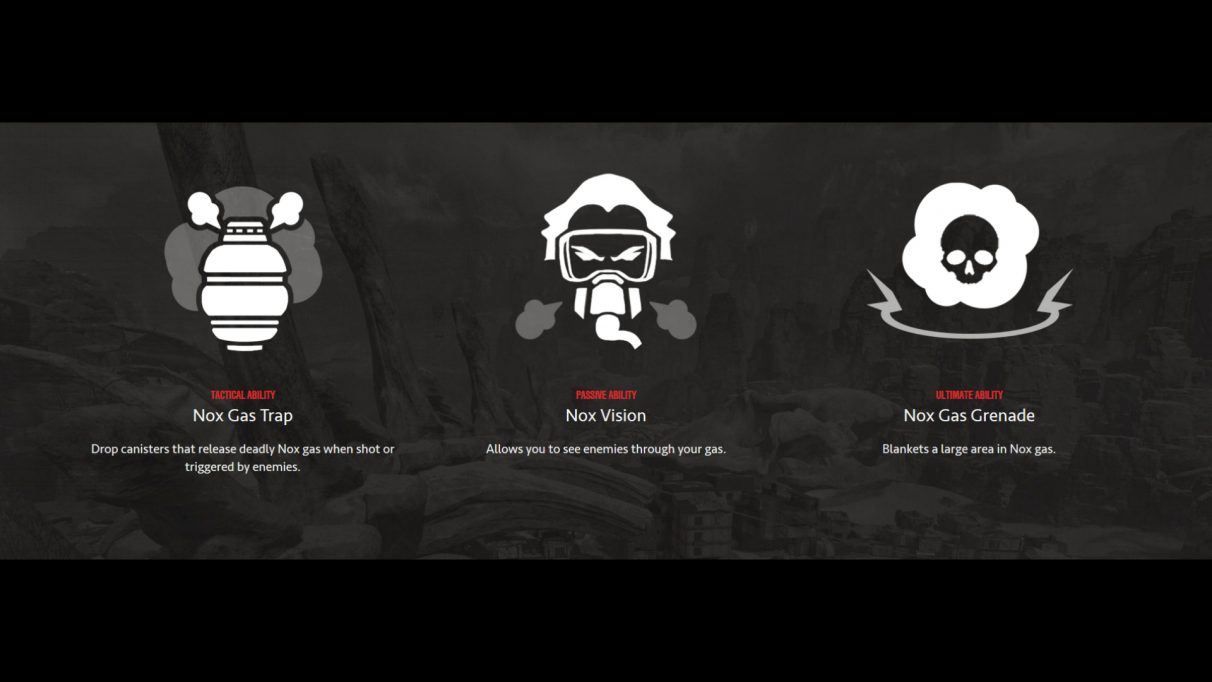 Just like every other character in Apex Legends, Caustic comes equipped with a Passive (always-on) ability, a Tactical (activatable on short cooldown) ability, and an Ultimate (activatable and requires charging over time) ability. However, unlike any other Legend, Caustic’s powers all revolve around exactly the same tool: his unique Nox Gas, which damages enemies those caught inside, as well as obscuring the vision and preventing the sprinting of anyone within (except for you). Let’s take a look at how each of his abilities interact with this mechanic. 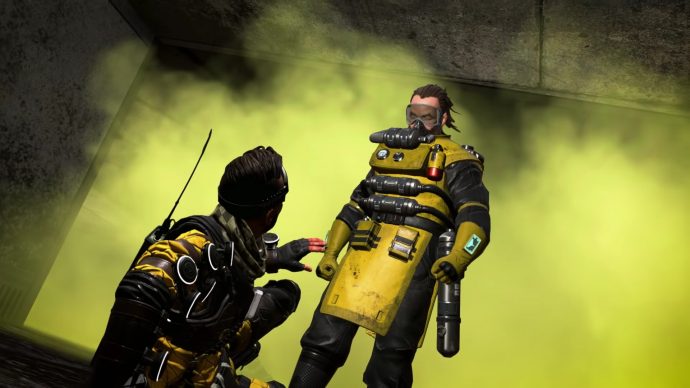 It’s one of just two Tactical abilities that highlight enemies the way a Digital Threat sight does, the other being Bloodhound‘s; but while Bloodhound’s has the advantage of seeing enemies through walls, Caustic’s Nox Vision is dynamic, tracking enemies at every moment that they are inside the gas, rather than just highlighting where they were at a specific time.

Your Passive basically serves as another reason to rely heavily on your abilities to spread Nox Gas across every encounter, and then pick off enemies while they are damaged and vulnerable. It also makes for what some might consider to be an even more effective method of defence than Bangalore’s Smoke, simply because when you surround yourself with Nox Gas you’ll immediately see when an enemy is attempting to make their way through it to get to you. 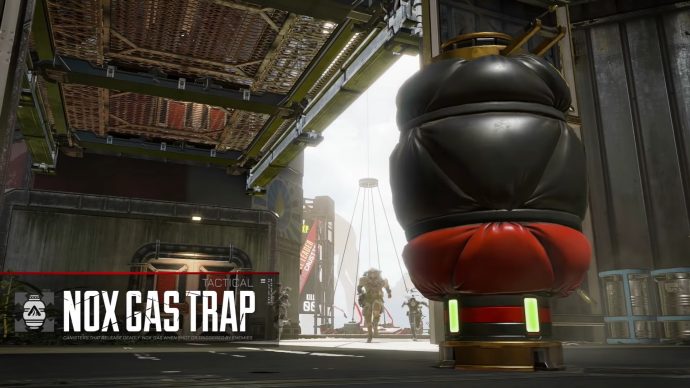 Caustic’s Nox Gas Traps are what you really think of when you think of what Caustic brings to the team. These large canisters can be dropped a (very) short distance in front of you, and can be activated after a moment either by proximity (i.e. if an enemy is close enough to it) or by being shot, either by you, a teammate, or an enemy. Once activated, these traps will spray out a cloud of toxic Nox Gas around it.

Like Bangalore’s Smokes, this is an ability with multiple charges. In Caustic’s case, you can have a maximum of three charges for this ability (so three traps that you can lay down in quick succession), but these traps if left idle will persist until the end of the match, and you can actually have a maximum of six of these traps on the map at any given time. If you attempt to place a seventh, then your oldest trap will be removed from play, and so on.

These traps are to be used both defensively, to deter enemies from getting closer and to cover yourself in Nox Gas, and offensively, to pressure enemies hidden around corners and behind cover. It’s a very good idea to shoot your traps shortly after throwing them, rather than relying on enemies to stumble too close. The reason for this is that it’s fairly well-known now that you can shoot the bottom cylindrical red section of the trap in order to destroy it without setting off the Nox Gas. 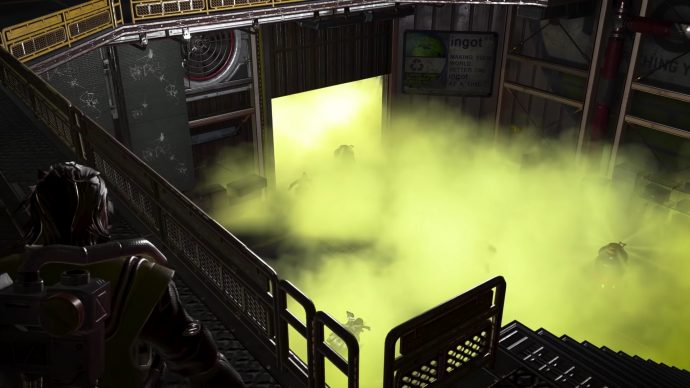 Caustic’s Ultimate is frankly a little underwhelming, and has no right to have the charge time that it does. It doesn’t even have the right to be an Ultimate, really, as it’s more or less the same as placing down and shooting two or three of his Nox Gas Traps. But still, it has some utility that his Tactical lacks.

Nox Gas Grenade is exactly as you’d expect from the name; you throw a grenade, and it explodes on impact into a large cloud of Nox Gas, about twice the diameter of a regular Nox Gas Trap. And that’s it, really. It’s useful in that you don’t have to bother with throwing and then shooting in order for it to activate, and it can be used to great effect to obscure yourself when you need to heal or revive a teammate; and there is some use in being able to throw it further than a normal Trap.

But chances to use this ability offensively are very few and far between, as they rely on an enemy team that doesn’t react quickly to the Gas. You might get a few ticks of damage in, but that’ll be it: which is why I’d advise you keep hold of your Ultimate until you need to use it as a deterrent. Think of it as one of Bangalore’s Smoke Grenades – look for opportunities to block an area off, or to obscure yourself or a teammate from the enemy as you reposition or heal. 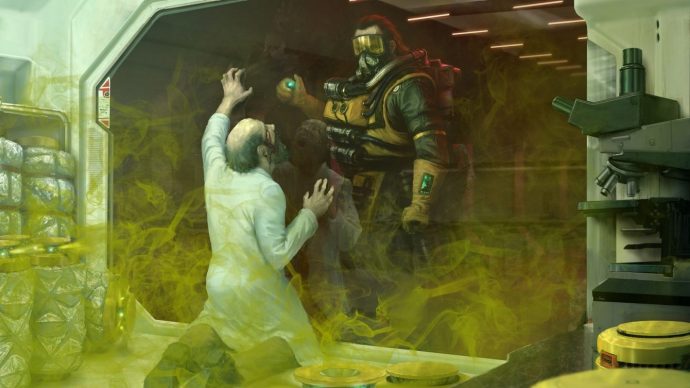 How to play Caustic – top Caustic tips and strategies

Finally, let’s finish up with some more general tips and tricks on winning Apex Legends matches as Caustic.

And that’s everything we’ve got for now on Caustic. He’s a tricky Legend to master, for sure, but I’ve seen some truly skilled Caustics before, and believe me, they can really ruin your day. There’s no better time to start learning this buff-as-a-truck character, so why not take the plunge into the Nox Gas, and find out all his strengths for yourself?