Season 5 has launched, and it’s a good time to be a Gibraltar main in Apex Legends. We’ll break down all the reasons why in this Apex Legends Gibraltar guide, with in-depth explanations and stats on his abilities, and useful top tips on how to increase your kill and win rate as this tankiest of Legends.

There’s a lot to cover with Gibraltar (no, that wasn’t a comment on his size), and a lot to learn if you want to truly master the Shielded Fortress of Apex Legends. Click on any of the below links to skip straight to the section of your choice.

Let’s get this out of the way first: yes, Gibraltar is big. The biggest, in fact. And it’s a substantial downside to playing as him in Apex Legends – or at least, it used to be (more on this in a moment). But even pre-1.1.1, once you got past this, if you took the time to learn and master his abilities then he’d prove his worth many times over.

Gibraltar’s focus is in protection and defence, though he can also initiate and push with a great deal of success. His Passive provides him with a great deal of personal tanking potential, while his Tactical Dome of Protection, if used correctly, can completely change the course of a fight. His Ultimate meanwhile, much like Bangalore’s, can be used both defensively and offensively – particularly offensively, though we’ll get to that in a moment.

The trick is to make use of your abilities in order to have a marked effect on encounters with enemies, because in a straight up no-abilities fight, Gibraltar will always be at a disadvantage with his large hitbox. Learn the moments where your Tactical and Ultimate would benefit your team (particularly with the Dome, there are specific uses that can really help you on your way to become the last team standing) and stay on the move as much as possible. Despite his slow-feeling movement animation, Gibraltar has the same movement speed as any other character, so you won’t have any trouble keeping up with your teammates. 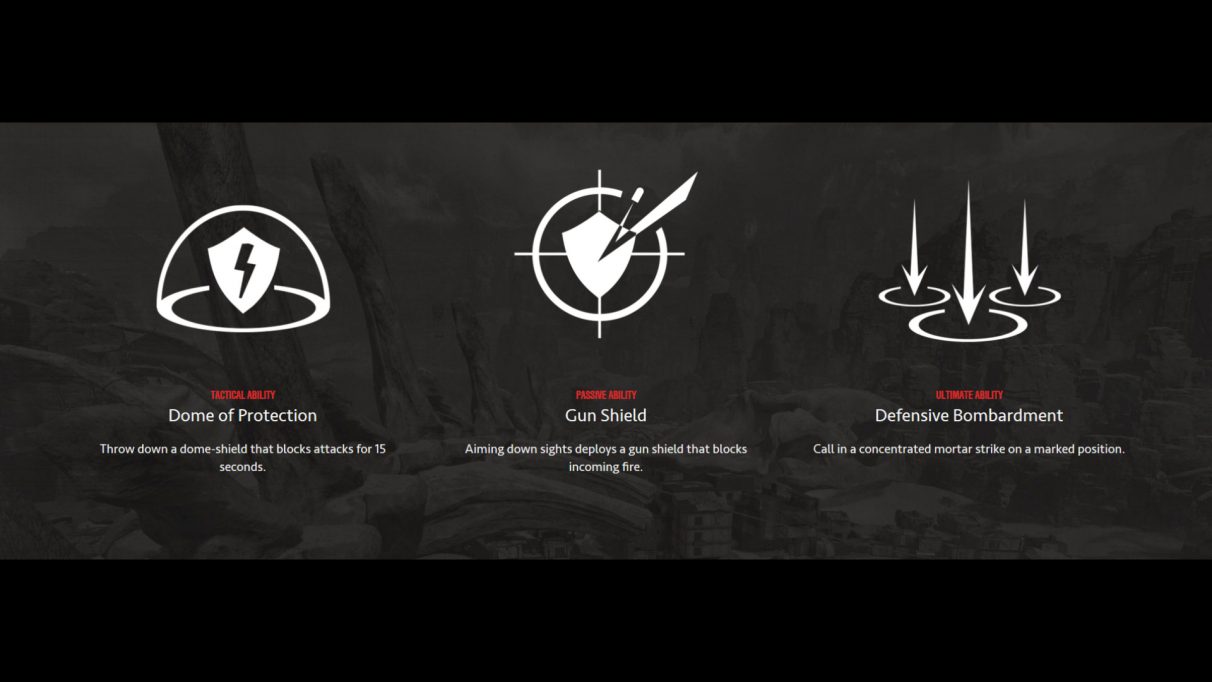 Gibraltar’s abilities, as discussed, generally revolve around protection, zoning, and changing the pace of a fight – though they all use very differing methods to accomplish this. Let’s take a look at each ability in turn, starting with his Passives. 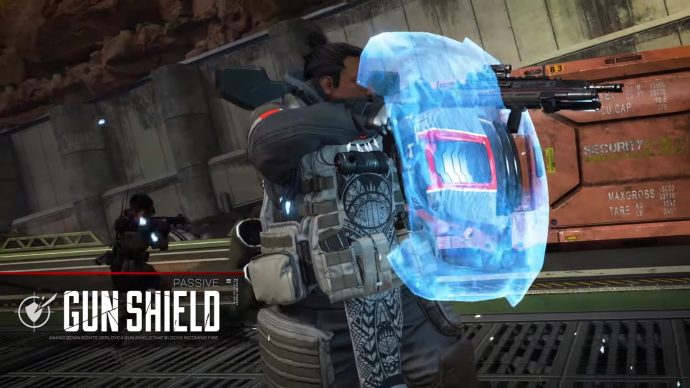 What’s more, the Shield will block all damage from the last shot that breaks it; for example, a Kraber shot will deal 125 damage, but Gibraltar’s Shield will block the entirety of that damage before breaking, even though it only has 50 HP.

If you’ve taken a look in the keybind settings for Apex Legends, you may also have noticed that there is a specific keybind for toggling Gibraltar’s Gun Shield on and off. Uses for this are few and far between, but it’s true that the brightly glowing Gun Shield does stick out like a sore thumb even from a distance, so at times you may want to turn it off when sniping or initiating, before turning it back on once your presence is already noticed by the enemy. 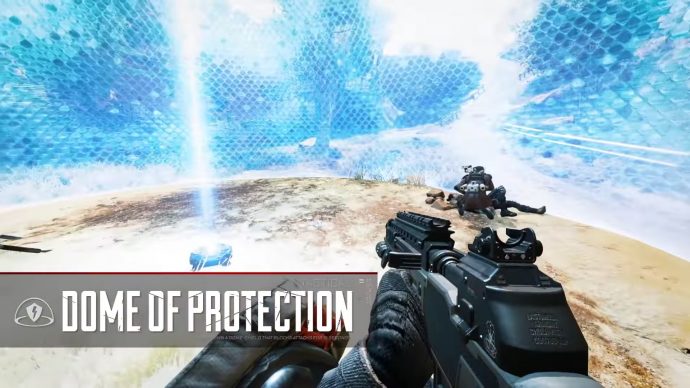 Gibraltar’s Dome of Protection is one of the surest and most immediate ways to alter the makeup of a team fight. This shield will deflect and absorb all gunfire and ability-related damage, while allowing any player (friend or foe) to pass through its barrier. Using this Tactical ability was prompt Gibraltar to throw down a  small circular generator onto the floor in front of him, around which the Dome will immediately appear.

This is an excellent defensive ability that can be used to great effect while healing (particularly thanks to its new increased heal speed effect for those inside the Dome), reviving, using a Respawn Beacon, and numerous other circumstances; however, it can also be misused, with spectacular results, if you don’t coordinate with your teammates and accidentally end up capturing the throwables for Bangalore‘s or Caustic‘s Ultimates. Regardless, it’s a strong and dependable form of protection. However, you do need to be aware that it is one of the most visible phenomena in Apex Legends, and enemies will be able to see the Dome from a very long distance away.

If used during an encounter, it’s imperative that your team maintains control of the Dome, rather than allowing the enemy to take over it. Having said that, you should aim not to occupy the centre of the Dome, but to dance in and out of its edges, much like you would with Bangalore’s Smokes. This way, you have the advantage of its protection, but you can quickly jump through in order to deal quick damage before dodging back again. 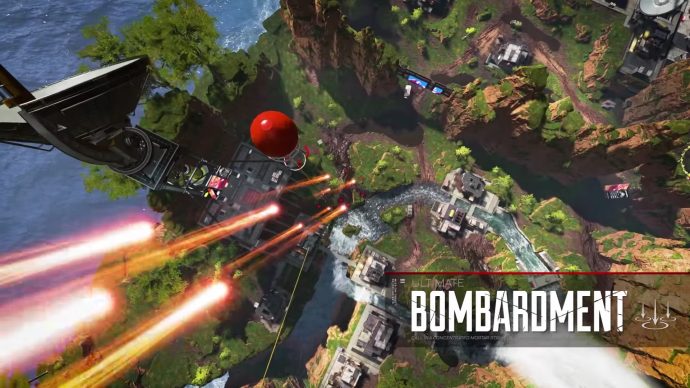 On the face of it, Gibraltar’s Ultimate, Defensive Bombardment, looks very similar to Bangalore’s Rolling Thunder ability. and it is, really. Both require you to lob a throwable at a specific area, after which missiles will rain down around that point before exploding, dealing damage to and stunning enemies (or yourself if you’re caught in the blast).

The difference is that, while Gibraltar’s missiles deal just as much damage as Bangalore’s, Gibraltar’s Defensive Bombardment operates in a smaller circular area, turning it into a more concentrated damage-dealing Ultimate. Moreover, the delay between throwing the marker and the missiles exploding appears shorter for Gibraltar than for Bangalore.

It can be tricky to know when is the right time to use Defensive Bombardment; it doesn’t have the same utility as Bangalore’s Ultimate because it lacks the size to operate as a truly effective zoning tool. However, it can be used to great effect when initiating or if you need to flush out an enemy team sitting behind a rock or some other cover. Even if they do escape in time, it often provides your team with enough of a distraction to move to a better position or to make a push towards the enemy to end the fight. You can also use Gibraltar’s Ultimate in conjunction with his Tactical on yourself for some momentary respite if you need to heal or revive a teammate. 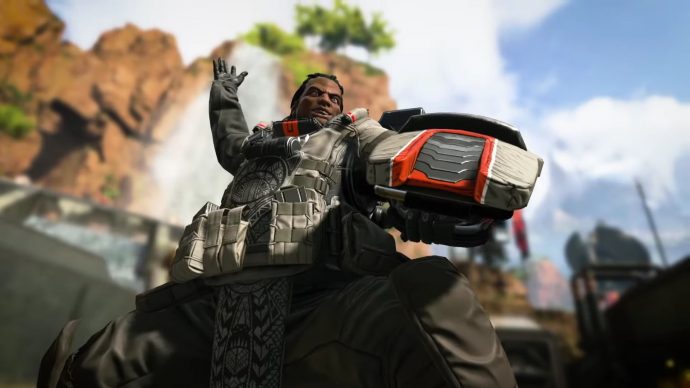 How to play Gibraltar – top Gibraltar tips and strategies