Season 5 has arrived at last, and Octane, the high-speed daredevil released with Season 1, is now far from the newest Apex Legends character. But he’s still a force to be reckoned with, able to run rings around other players and regenerate health passively over time. Our Apex Legends Octane guide will help you to better understand his abilities and the high- ahem, –octane playstyle you’ll need to adopt with him to succeed heading into Season 5.

There’s a lot that Octane brings to the table that other characters lack – namely, a certain risk-reward nature inherent in his abilities. Below we’ll go through just about everything there is to know about him, from strengths and weaknesses to abilities and hitboxes. Feel free to skip ahead to a specific section using the links below.

Where to begin with Octane? He’s the most mobility- and sheer speed-focused Legend we’ve yet had, beating out Pathfinder and Wraith simply with the ease and frequency with which he can utilise his Stim Tactical to race across World’s Edge. He’s the tip of the spear in terms of team composition; Octane’s role is to always be slightly ahead of his team, first into combat, and first out again – or first to die.

The trade-off of his Tactical, sacrificing health for movement speed, is a brand new system for Apex Legends abilities. It’s very nicely balanced, allowing you to play either with caution, only using Stim before or during an encounter (I wouldn’t recommend this), or with reckless abandon, Stimming up every few seconds as you loot up and look for enemies (and let’s face it, the latter is what Octane would want).

It’s also fairly easy to talk about Octane’s strengths and weaknesses thanks to the sacrificial aspect of this Tactical ability. His strength is that he’s the fastest character, and a scary presence during a fight. Fights can easily be won in six seconds in Apex,  which means the entirety of an encounter could be spent trying to get a single shot to land on this crazed drugged-up speed demon. But if used at the wrong moment or too frequently, Octane’s diminished health will let him down, and his Ultimate is really not that practical during fights, so if you Stim too hard you’ll have nothing to fall back on.

Octane hitbox vs other Legends

Octane’s diminutive frame likely puts him along the same scale as Lifeline or Bloodhound. This, combined with his trademark speed, makes him a strong candidate for toughest Legend to land shots on, even giving the slippery Wraith a run for her money. Of course, he’s likely to have a little less Health than most enemies when you first encounter them, so you may not need to land as many shots on him. 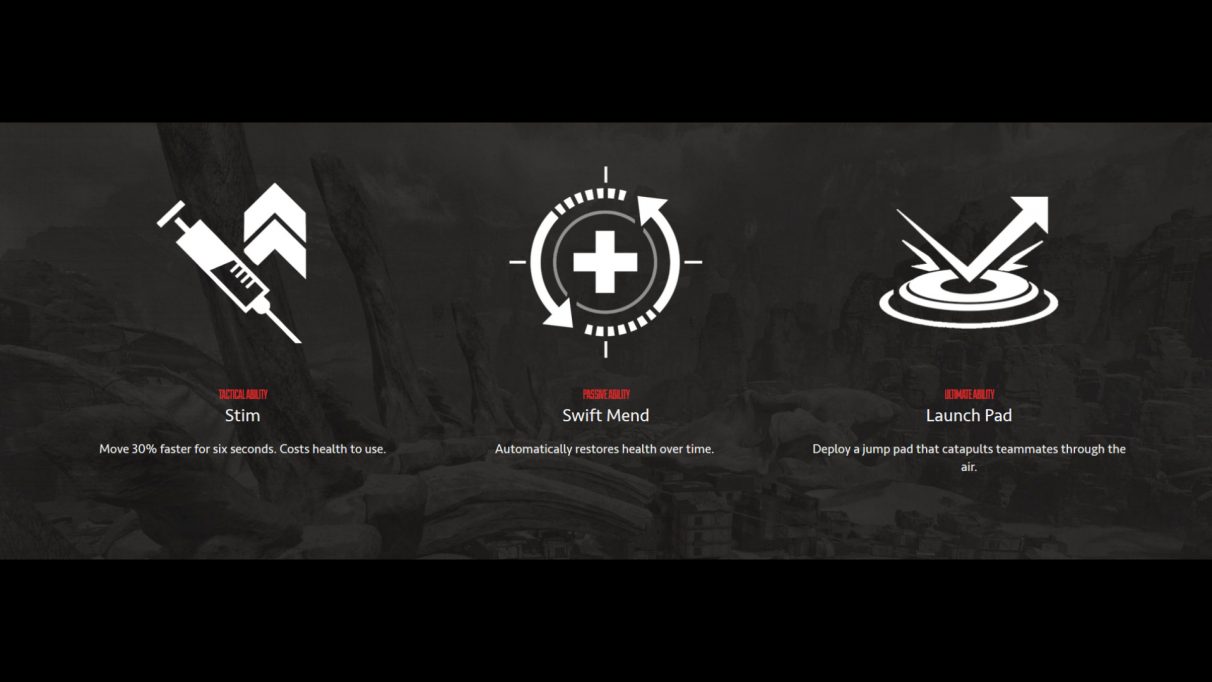 Octane’s abilities make for some fascinating new tactics we’d not seen previously in Apex Legends. Like all characters, he has access to three; one Passive, which is always (is this case nearly always) in effect; one activatable Tactical ability, and one Ultimate ability which requires charging over time. Let’s take a closer look at each ability in turn and how best to use them. 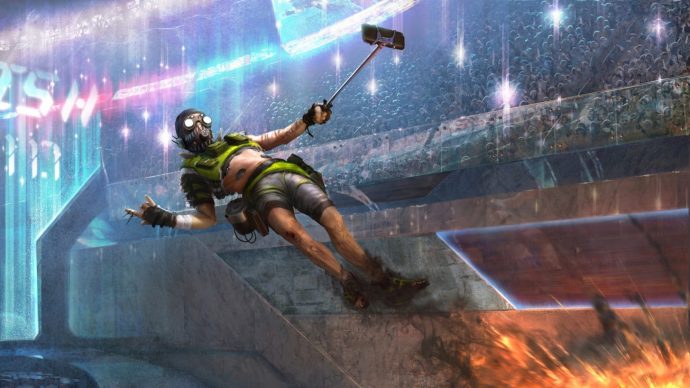 Octane’s Passive is difficult to talk about without also describing Octane’s Tactical, since the two are designed to work in tandem more than any two other abilities in Apex Legends. It’s a simple and very useful Passive that regenerates 1 Health (not Shields, just Health) every 2 seconds. You may notice that in the previous leaks, this ability had the caveat that it would only work when not in combat; and this does still appear to be the case, though it’s no longer mentioned. If you’re damaged, there’s a few seconds’ delay before the heal will reactivate.

0.5 HP per second is, of course, nothing to write home about, and it won’t save you during a fight, but it allows you to use your Tactical much more freely, and it allows you to conserve healing items such as Syringes and Med Kits for more dire circumstances. It’s a nice little Passive ability because you don’t have to concern yourself with it like you would with, say, Wraith’s Passive. It just does its thing, letting you get on with bouncing across the map and running rings around enemies. 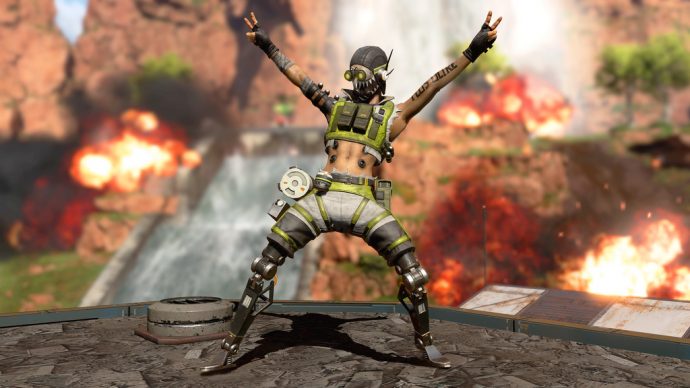 Stim is Octane’s absolute bread-and-butter ability, and I’m gonna tell you right now that in order to use it properly, you have to learn not to be afraid of having low Health. You may think Health is more important than Speed, but in Apex Legends that’s not true; speed is just as important for survival as Health (in some cases, more so). Don’t be afraid to spam this Tactical multiple times in a row as you’re looting up during moments of downtime, or during a fight.

I love this ability. A 30% movement speed bonus is massive (it matches Bangalore’s Passive speed bonus, for reference), and you can activate it every 8 seconds – that is, it has a 2-second cooldown after its 6-second duration has elapsed. So if you use it properly, you can spend nearly the entirety of a fight at 130% speed, which allows you to absolutely fly around corners and across plains or corridors. It’s a scary thing to see that metal-legged speedster dashing towards you with Peacekeeper in hand, I’m telling you.

It takes away 10 Health each time, which means if you keep spamming it the moment you’re able then your Passive Swift Mend won’t be able to counteract the Health decrease. But again, don’t let that stop you from using it plenty. There’s a reason that cooldown is so low; so you can have fun spending the majority of your time sprinting and sliding like crazy. 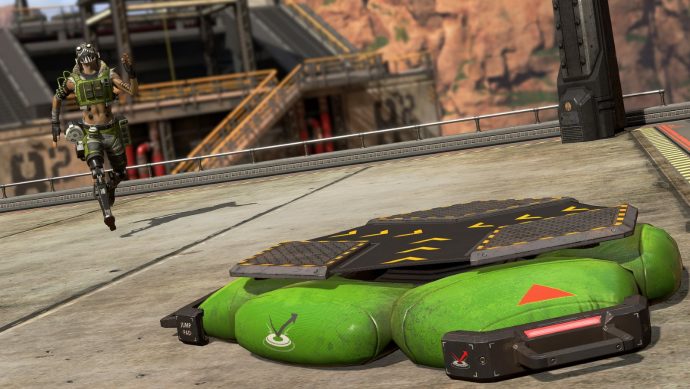 Octane’s Launch Pad is a fairly straightforward mobility-focused Ultimate; when activated, you’ll throw down a Launch Pad in front of you much like Gibraltar’s Dome (though you can actually throw the Launch Pad surprisingly far), and after that the Launch Pad persists and is useable by anyone, friend or foe alike.

What’s nice about the Launch Pads is that they’re quite predictable. They will always send you straight forward in exactly the direction you’re facing when you walk over it. You can use it fairly easily to cover distance quickly, to initiate, escape, or simply to outrun the Apex Legends Ring. It’s much like Pathfinder’s Zipline Gun Ultimate in terms of when it is useful, and also because, like Pathfinder’s Ult, it can benefit the whole team, and will persist.

Truth be told, it’s not a wonderfully practical ability. I greatly prefer abilities which you can rely on to help you while in combat. Wraith’s Portals are better in pretty much every way than these Launch Pads, except for the fact that Octane’s Ult predictably has a lower charge-up time. But it’s certainly fun to bounce around the map, and as time goes on players will probably discover all sorts of unique features and quirks of this ability when combining it with others. We’ve already discovered a few below, have a read.

Just a heads up, Octane’s ult has a very precise hitbox from r/ApexLegends

How to play Octane – top Octane tips and strategies

Finally, let’s finish up with some more general tips and tricks on winning Apex Legends matches as Octane.

That’s pretty much everything we’ve got on Octane for now, so hopefully you’ve learned a thing or two about how best to utilise his unique skillset. Now what are you waiting for? Season 5 is here; get busy.

For full details and opinions on all of the characters together, take a look at our Apex Legends characters guide for fully updated details. Alternatively, if you’re looking for a focused guide like this one but on a different Legend, then simply take a look at the table below and click on a link to be taken to the hero of your choice.