Loba, newly introduced with Season 5 of Apex Legends, looks to be one of the most powerful and intriguing characters we’ve seen so far. This so-called Translocating Thief thrives on careful use of her abilities to gain the upper hand before a fight. There’s a high skill ceiling here, but our Apex Legends Loba guide will help you reach the top in record time, with in-depth tips and explanations of each of her potent abilities.

Loba is one of the most exciting Legends yet. Her skillset requires a lot of care and planning to use properly, but a good Loba player ensures that their team always has the advantage in any encounter. With her Tactical teleport, and the unique looting skills that come with her Passive and her Ultimate, Loba is very quickly rising to the top of the current Apex Legends meta.

Loba’s downsides mostly arise from improper use of the tools available to her. Her teleport, for example, leaves her vulnerable before, during, and after – so anyone who attempts to use it in a bad situation will almost certainly be punished for it. And the same is true for her Ultimate, which is very difficult to use without notifying all nearby enemies of her whereabouts. But when used with care, and with the clear intention of gaining the upper hand before a fight, Loba’s abilities make her one of the strongest Legends in the Apex Games. 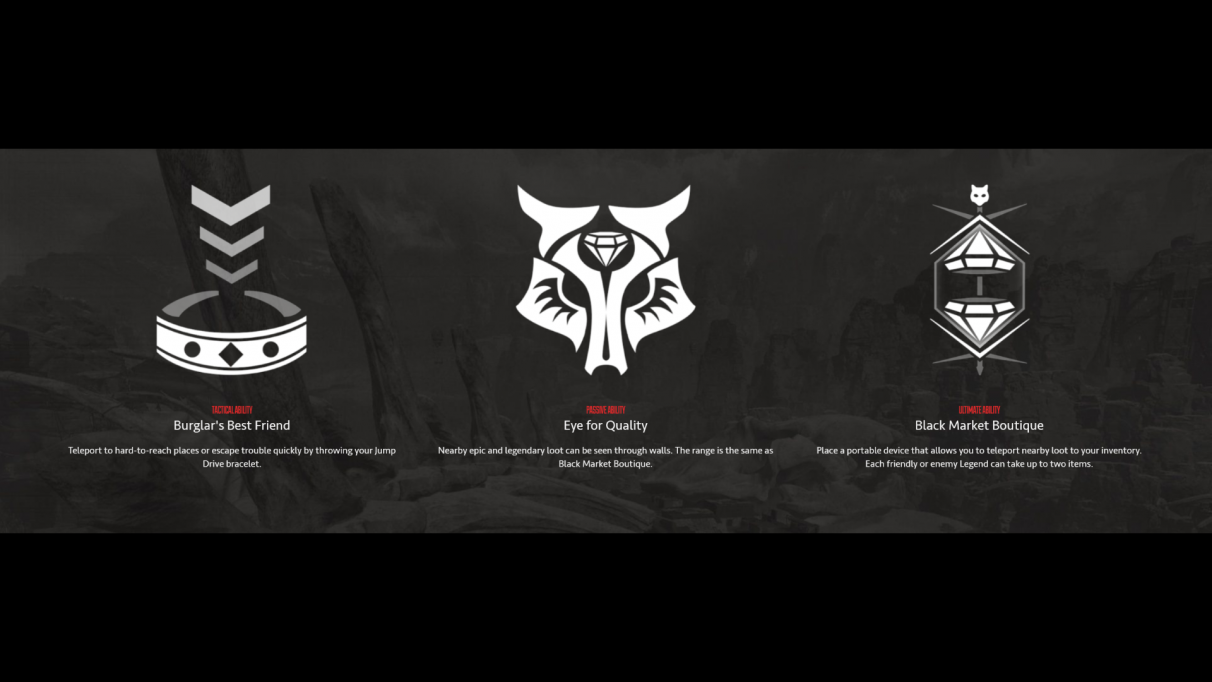 As with all other contenders in the Apex Games, Loba’s skillset is comprised of three abilities: her Passive (always in effect), her Tactical (activateable on a short cooldown), and her Ultimate (activateable with a long charge and cooldown time). Let’s take a look at each ability in turn and talk about how you can use them to gain the advantage in any situation.

Loba’s Passive is a wonderful ability for the early-game, allowing you to catch a glimpse ahead of time of what loot you’ll find in a Supply Bin, or on the floor in a nearby building. Not only can you see whether there is purple or gold loot nearby, but you can also see exactly what it is from its outline, allowing you to be much more efficient with your looting. And anything which cuts back on looting time is a very good thing.

There’s really not much to say about how you should be using this Passive. It’s just a forever-useful indicator of strong loot from great distance. But it’s also useful when deciding the location of your Ultimate – but we’ll get to that in a moment.

The real meat of Loba’s skillset is her Tactical, which allows her to teleport short distances – as long as you can keep her alive during the lengthy wind-up and wind-down animations. Much like Pathfinder’s Grappling Hook, there’s quite a bit more than meets the eye to Burglar’s Best Friend, and you’ll have to play around with it for some time before you can reach the summit of its considerable skill curve. But used correctly, this ability makes Loba one of the fiercest and most dangerous characters in Apex Legends.

There are a couple of things you really need to know about Burglar’s Best Friend before you start using it left, right, and centre. First: you don’t have to wait until the bracelet hits the ground before teleporting. If you use the ability again while the bracelet is in the air, it’ll teleport you to the ground directly below the bracelet’s current location. This means you don’t have to waste time lining up the perfect teleport up onto a rooftop, because you can just throw it in a long arc over the building, and interrupt the teleport while the bracelet is above the roof.

Second: this ability really locks you down while you use it. Not only are you subjected to lengthy wind-up and wind-down animations, but you’re also prevented from using weapons or interacting with things while the bracelet is in the air. This is not a panic button that you should throw to get you out of trouble. The trick here is to always use Burglar’s Best Friend with calculated intention. Use it to initiate, to flank, to reach powerful high ground or to create distance between yourself and the enemy. And bear in mind that it’s not terribly difficult for enemies to see the teleport happen, so don’t use it if you’re looking for a stealthy solution.

Oh, and – don’t use it near an enemy Wattson’s Interception Pylon. It’ll be snatched right out of the air and returned to you. No teleporting allowed.

Black Market Boutique is probably the coolest-sounding ability Apex Legends has seen in a long time. On paper. In reality… Yeah, it’s still pretty good. You just have to work around a couple of limitations in order to use it well.

There’s no denying that Loba’s Ultimate can completely save your game if you use it at the right time in the right place. Place the device on the ground in front of you, and you’ll be able to remotely snatch any loot found on the floor or in containers (including death boxes) in an ~80 metre radius around you, without fear of exposing yourself. Multiple times now, I’ve had a game completely turned around because I used this Ultimate and found – for example – a Purple Body Shield and Selectfire Receiver just before a big fight. Without those items I’d have been toast.

However, there a few big considerations packaged up with this ability. First is that each player that interacts with the Black Market device can only take a maximum of two items from it. So communication is key if you’re playing in teams. Sometimes one player needs four items while you only need one (or none) – and you should therefore take what your teammate needs and pass it to them afterwards.

Second: the Black Market persists forever, and can be used by enemies. So after you and your teammates have finished with it, you should always close the Black Market down by hitting the Alternate Interact button next to it.

Third: Setting up a Black Market device generates a massive pulse that acts as a great big beacon for any nearby enemies that might as well be screaming “Hey, I’m over here!” at the top of its lungs. Much like Loba’s Tactical, you shouldn’t use this ability if you want to keep the element of surprise.

But despite these limitations, Loba’s Ultimate is a phenomenal ability that can absolutely turn a match from a loss into a win. Just make sure you place it where it will actually reach what needs reaching. The Black Market device has the same range as Loba’s Passive, so you can use this to determine the very best place for the device.

Loba hitbox vs other Legends

As for Loba, no one has yet given a definitive answer to how her hitbox stacks against the rest; but the fact that she sports neither the Low Profile nor the Fortified traits means she’s likely to land somewhere in the middle of the chart. Possibly a little taller than Bangalore, but around the same proportions and therefore not large enough to warrant the Fortified Passive.

How to play Loba – top Loba tips and strategies

Finally, let’s finish up with some more general tips and tricks on winning Apex Legends matches as Loba.

And that’s all we’ve got for now on the Translocating Thief that is Loba in Apex Legends. For full details and opinions on all of the characters together, take a look at our Apex Legends characters guide for everything you need. Alternatively, if you’re looking for a focused guide like this one but on a different Legend, then simply take a look at the table below and click on a link to be taken to the hero of your choice.

The fastest legs in Kings Canyon