When Command & Conquer: Remastered Collection launches next month, it’ll arrive with a lovely little gift for the modding community. This week, EA announced that some of the source code for both Command & Conquer and Red Alert will be freely accessible at launch, giving modders the groundwork to go wild creating whatever they’d like – up to and including giant tanks that punt nukes out of their big ol’ guns.

Posting on Reddit and the Command & Conquer site this week, producer Jim Vessella laid out plans for Remaster’s modded future. There’ll be a nice new map editor, sure, but Vessella also revealed that both TiberianDawn.dll and RedAlert.dll (and the source code for their respective games) will be fully accessible to budding modders on release.

“It’s worth noting this initiative is the direct result of a collaboration between some of the community council members and our teams at EA,” said Vessella. “After discussing with the council members, we made the decision to go with the GPL license to ensure compatibility with projects like CnCNet and Open RA. Our goal was to deliver the source code in a way that would be truly beneficial for the community, and we hope this will enable amazing community projects for years to come.”

It’s a somewhat unprecedented move for EA, a company that’s long been both resistant to the mod scene and actively hostile towards efforts aimed at preserving their online games – such as the now-scrapped Battlefield Revive Network. 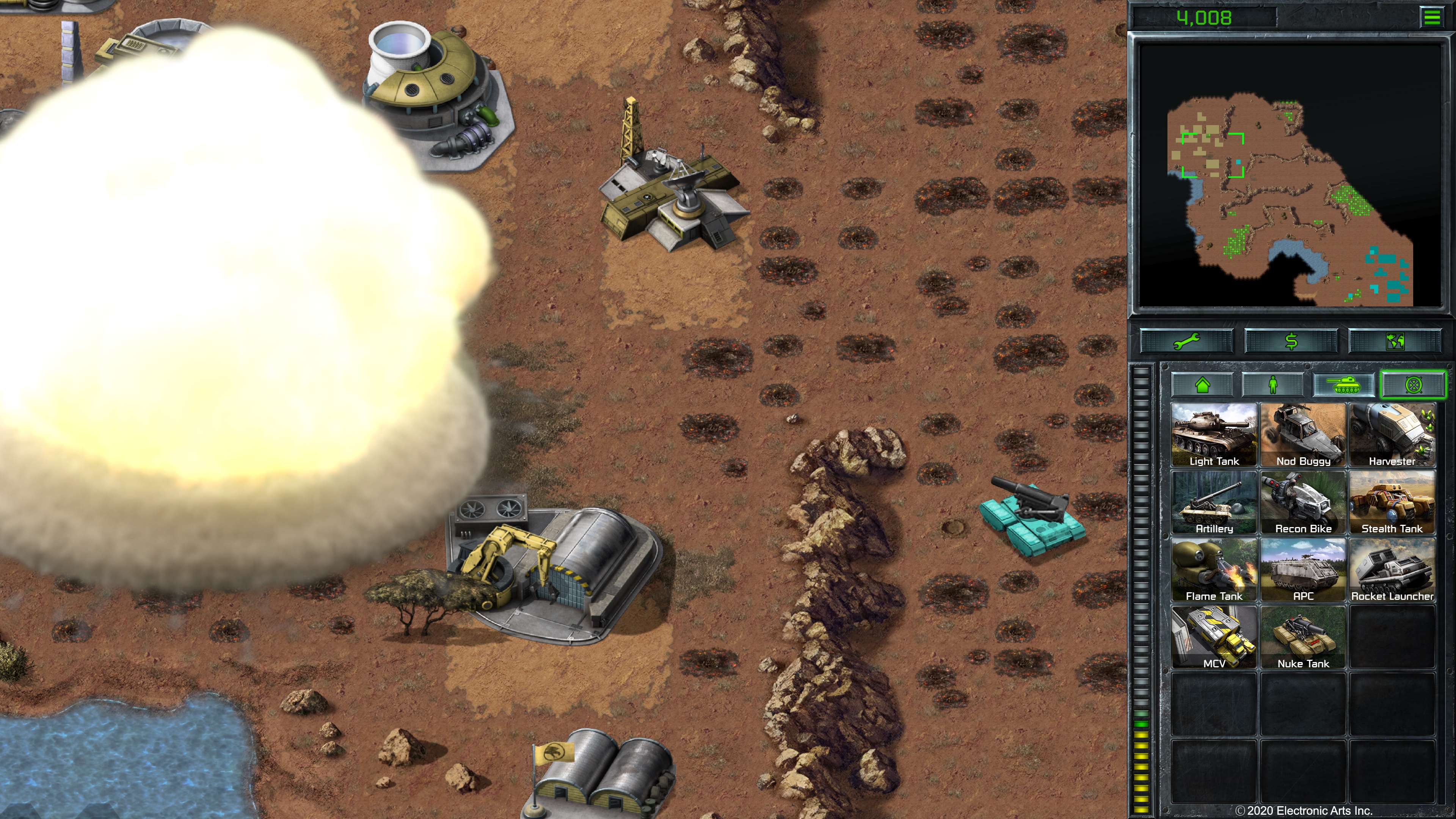 Yup. There is certainly a nuke coming out of that tank. Subtle, it is not.

To demonstrate the tool’s functionality, Petroglyph bashed out a new unit in the form of the Nuke Tank, a Brotherhood Of Nod take on the Mammoth tank that (spoiler alert) fires big ol’ nukes out of its giant cannon. The Steam version of C&C:R will also feature full Workshop support for downloading and installing mods – Origin players will have just as much access to mods, but they’ll have to go hunting for them outside EA’s ecosystem.

It’s not all good news on the battlefield, sadly. Despite plans to launch C&C:R with full LAN support, Vessella notes that the feature won’t make it into the game in time for release. See, it’s a bit hard to test LAN functionality, what with the Covid-19 pandemic and all going on.

“We understand this feature is vital as both an avenue to play mods in multiplayer, and also to serve as a backup in case the online systems are ever down,” Vessella clarified. “We’re bummed this one got away, and will continue to keep this on our priority list going forward.”

Probably for the best, mind – now’s not the time to be hauling your big beige CRT across town for some strategy antics.

Command & Conquer Remastered hits Steam and Origin on June 5th for £18/€20/$20.. For more on EA’s remastering job, our Nate Crowley had a right old gab with Vessella last month on the challenges of bringing a beloved RTS classic screaming into modernity.