I knew Minecraft Dungeons was going to be fun when I played a couple of hours of the beta build last month. I knew this because, well, it was fun. It was the kind of fun you can fathom within about twelve seconds of starting a game, and the kind you know will be dependable in its simplicity, even if it might not last forever. And hey, guess what? Minecraft Dungeons is really fun! It’s a charming, lively little looter-bruter, with all Minecraft’s aesthetic elements, but absolutely nothing in common with it beyond that.

It’s not going to change the world of action RPGs (that is to say, Diabloids), as it is a fairly simple beast. And it’s a fairly small one too: with a seven hour single player campaign that a proper clicklord could probably breeze through in half the time, it leans heavily on replay value to deliver its 17 quids’ worth of goods. But it is pretty much what I hoped it would be when I wrote my preview, and I have very little to complain about now that I’ve seen the whole thing. 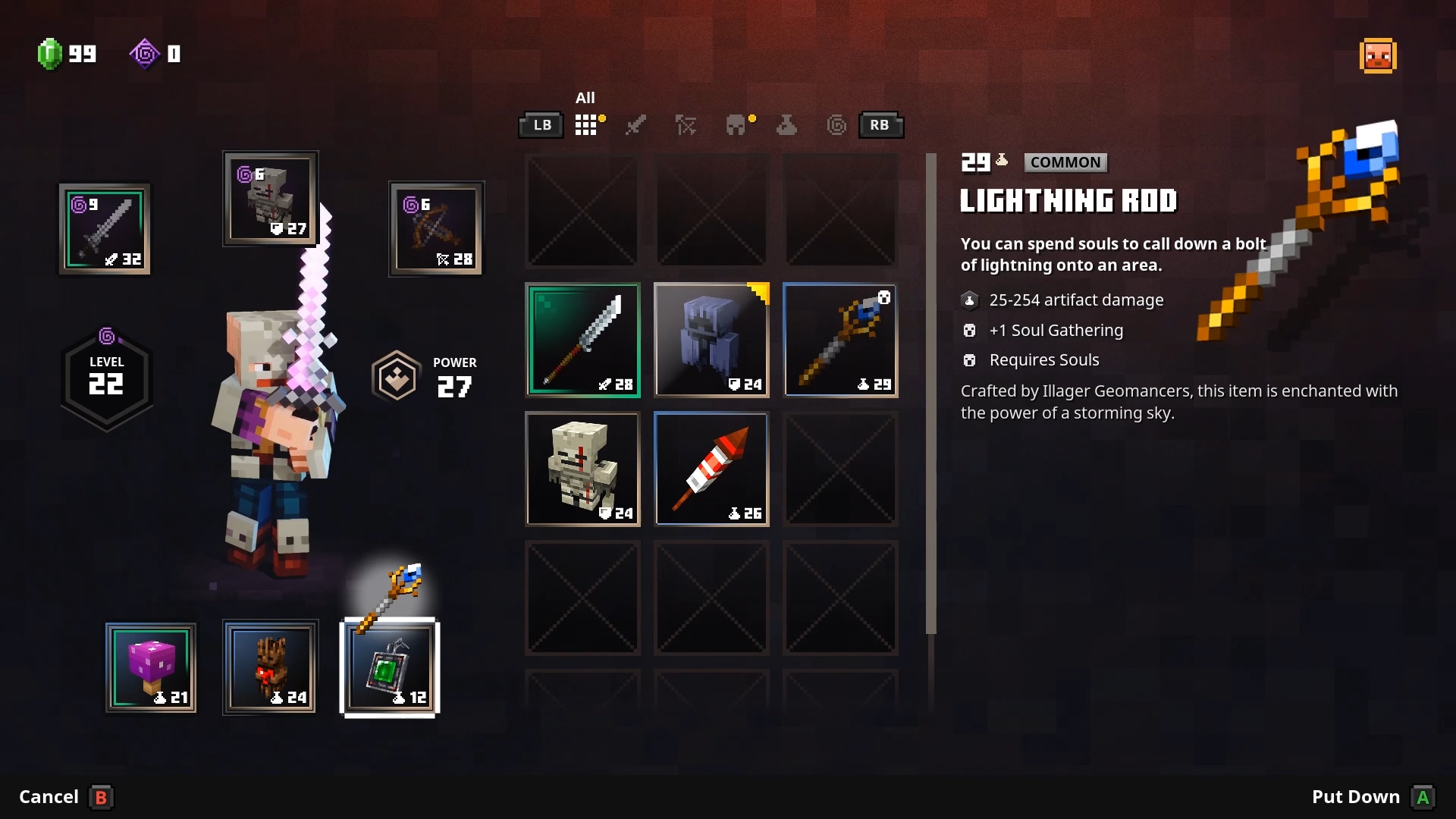 Some artefacts are powered by souls, which is casually chilling in a child-friendly game.

The central conceit of the game, which defines its triumphs and limitations alike, is its lack of any character stats. Everything about your blocky little adventurer is defined by six bits of gear: your armour, your melee weapon and your bow, plus three slots for artefacts with timer-based active abilities. The only concession to classic RPG stattery is a stripped down XP system, where each level-up grants you a single enchantment point. Any armour, melee weapon or bow you pick up will have a handful of potential special powers (there are around 20 for each of the three item types), which can be activated, and then upgraded, by spending enchantment points on them. The better the item, the more slots it has for enchantable powers, and the greater selection of powers in each slot. And that’s it, essentially. That’s the whole technical core of the game, in one paragraph.

Of course, it’s not as minimalist as it seems. Because there are many, many ways for those enchantment powers to interact, and the gestalt effect of them – plus the three artefacts you’ve got on you at any one time – is what counts for your character class. At one point, my character had a slow-hitting hammer that dealt massive splash damage and weakened enemies every time it hit, plus damage-reducing armour and artefacts devoted to further softening blows. They were a tank, pure and simple. But then I found sickle blades that created toxic clouds whenever they struck, and so I pivoted my build entirely to making the area immediately surrounding my character as lethal to be in as possible. 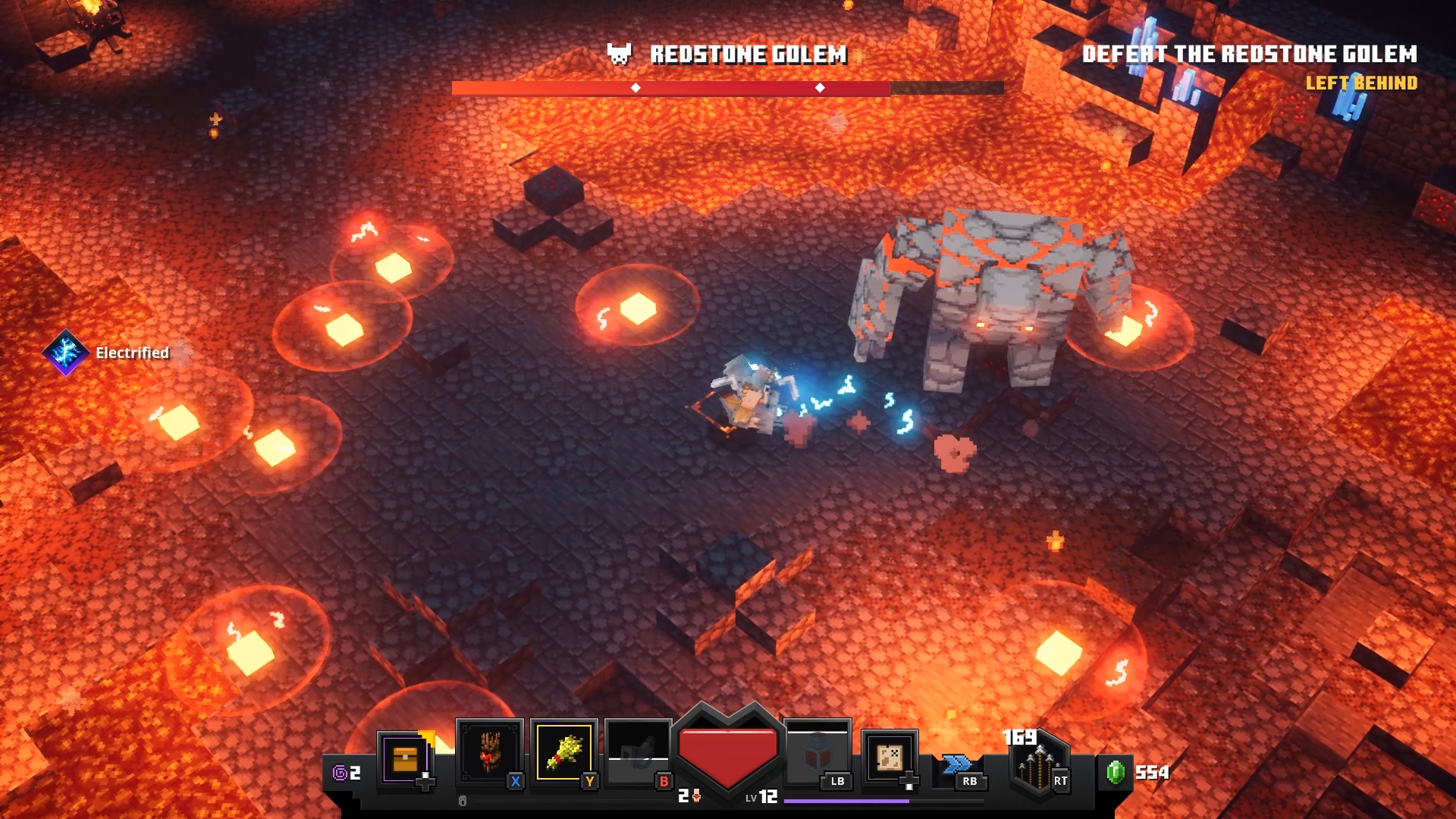 Tankenstein was the name of the scientist actually.

So far, so conventional. But then, at one point, I had a weird build that involved blowing a horn to knock enemies away from me, then rolling around shooting lightning at them while a pet llama distracted them. I mean, it’s not one of the classic class archetypes, is it? And that’s the real fun of the system. It forces you to improvise with whatever enchantment options become available, working out where they work well with each other, and then cobbling together desperately improvised martial arts that take advantage of whatever synergies you’ve discovered. The options expand even further, of course, when you’re dungeoning in a party with others.

Playing like this, you end up using pretty much every weapon type at some point, as everything will have its turn to be the best fit for the other stuff in your build. On lower difficulties it makes for a relaxing, sandbox-type experience where you can play around with convoluted and awkward ways to evaporate hordes of zombies. But on higher difficulties (and I say difficulties, plural, as Minecraft Dungeons has a swarm of the things), this experimentation becomes necessary for survival. 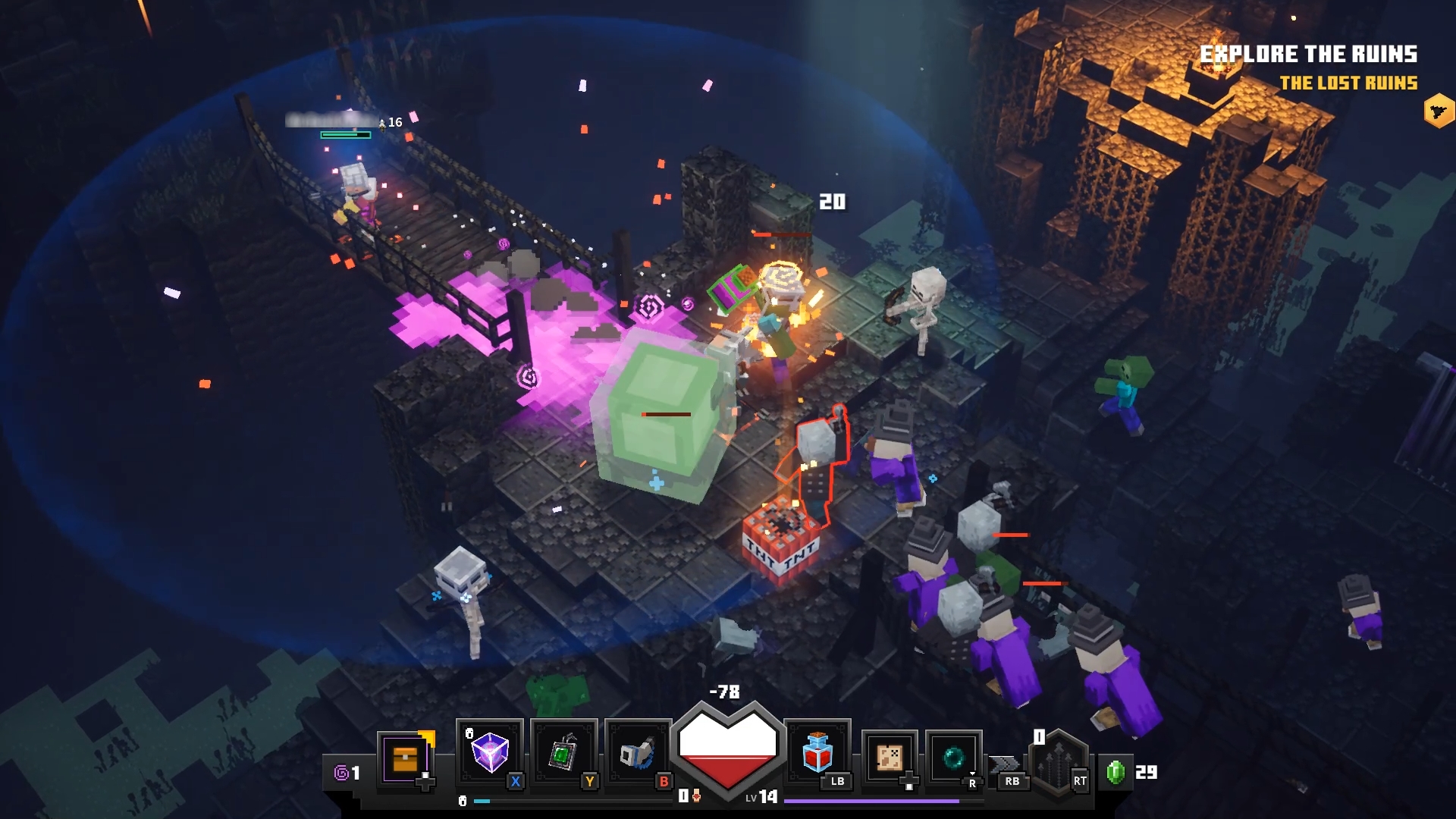 Me and Matthew get decimated by witches.

In fact, I was surprised by how tough Dungeons was, when I let it be. Just like the gear system, the difficulty curve is designed with accessibility for kids in mind, and the game doesn’t force you into many genuinely tricky situations in the default, ten-level route to the end of the campaign. But if you want it to be a challenge, there’s a ton of ways to make it one, from the aforementioned difficulty settings, to the unlocking of emphatically replayable, randomised dungeon runs that branch off from the campaign levels.

I tried out a couple of hours of multiplayer with RPS VidBud Matthew, and we were both surprised by how efficiently we had our arses handed to us by an absolute crowd of witches within minutes, when we waded into a dungeon we refused to believe was not recommended at our power level. You know the robot off of the Mandalorian who guards Baby Yoda, who’s really gentle and polite but will utterly massacre you if you decide to have a go at the green lad? That’s Minecraft Dungeons, that is. 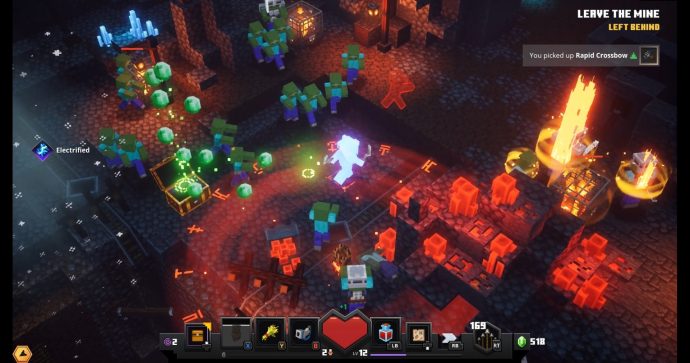 There’s an absolutely splendid number of enemies on screen sometimes, and I barely saw it drop a frame.

That said, I’m a bit baffled by how difficulty scaling works with multiplayer. From what we’ve played, it seemed that any level entered will be at a fixed difficulty, matched to the player who selected it, rather than a Borderlands-type deal where everyone has their own reasonably sized demons to be faced. This means that if there’s any significant level (and thus gear quality) difference between the players, you’ll end up either with the stronger player wading through all opposition like Dr Manhattan in the weaker player’s game, or the weaker player frantically chipping away at single zombies, on the grim edge of death, in the stronger player’s game.

In hindsight, I guess this is designed with parent-child co-op gaming in mind. I know that if my daughter was old enough to comprehend videogames in any meaningful way, I’d delight in escorting her through the levels, quietly softening up the tougher bosses and making her think it had been all her own work (at least until she inevitably got good enough to make an embarrassment of me, that is). But is it really satisfying as a co-op game for adults on more than a casual, let’s-hang-out-and-chat-while-we-mow-through-baddies level? I’m not sure. It may be we missed something, or didn’t give it enough tries in the time we had, but it certainly wasn’t something that instantly clicked. 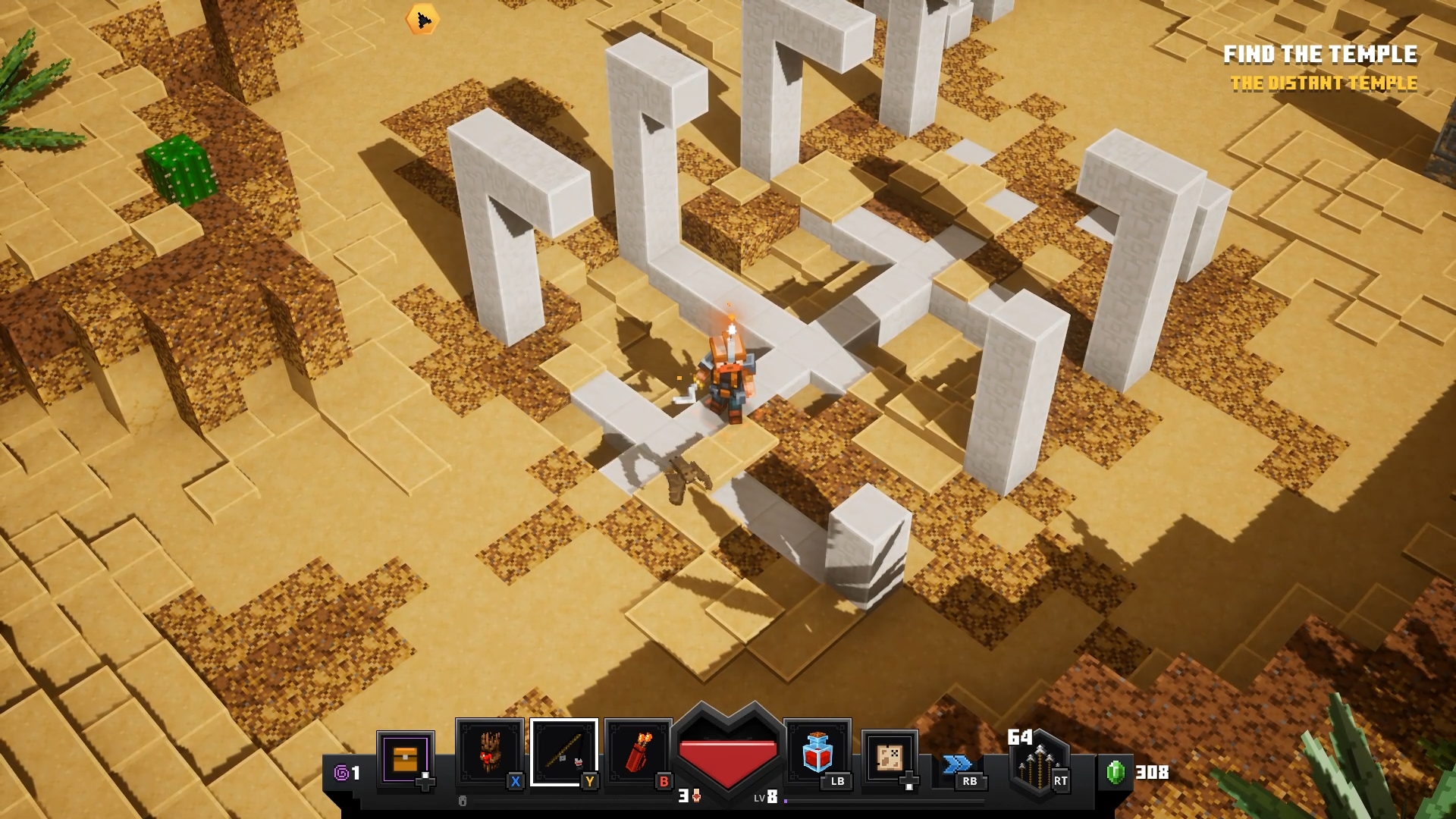 I just have to mention that at one point, my character got some armour that granted him a free pet bat, and I kept it long after it became obsolete because I loved the bat so much.

The other thing that left me a bit frustrated, and the only significant point on which my mind has changed since I wrote the preview, is how resolutely Minecraft Dungeons refuses to be Minecraft, even a little bit. As I said then, all the visuals and the audio cues are there, and it’s a relentlessly pleasant experience spotting blocks, mobs and concepts from Minecraft redeployed as elements in a looter game. But as Matthew remarked after a massive series of explosions, it just seems bizarre that in a setting designed entirely around the concept of altering physical spaces, everything in every level is completely implacable. You can’t so much as punch a barrel into splinters; I know this, because I tried, again and again, as my brain reverted to Diablo-trained instincts.

The design decision makes perfect sense of course. Fully destructible terrain would have completely invalidated the game’s current approach to level design, which is largely responsible both for how beautiful it is, and how slickly the action flows from fight to fight. But would it have hurt to have had a few blow-uppable walls? A bit of token mining, just as a nod to the fact that it’s called “Minecraft”? They even give you a pickaxe as a weapon! 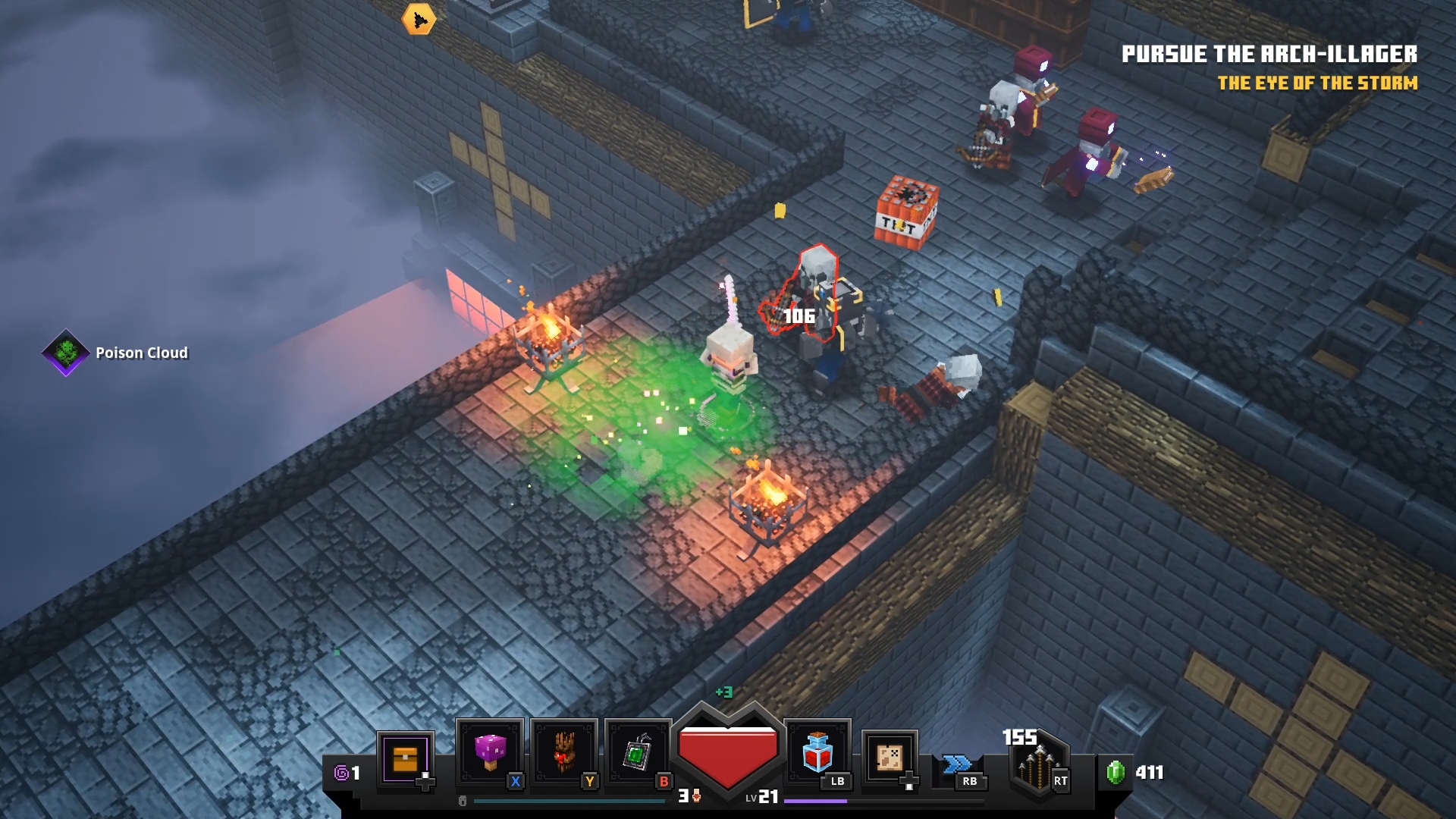 That TNT’s not gonna leave a scratch on the masonry.

I think, in the end, this gets to my lingering impression of Minecraft Dungeons. It’s a robust piece of design that you could well consider a triumph, given just how many ways in which the concept of an ARPG based on a construction game phenomenon could have ended in disaster. And I’m confident in recommending it as worth its price to even the most jaded click-stabber, especially one with even a passing familiarity with Minecraft. But the fact it’s been executed so competently leaves me wishing the developers had been a bit more reckless, frankly. A bit more experimental, in adapting its parent property to an alien genre. Because while the results might have been profoundly weird, it’s weird things – like Minecraft itself was, when it first appeared – that change the landscape of gaming.