Getting remastered games feels like a bit of a monkey’s paw at this point, doesn’t it? The finger has curled, and we get remasters of all the old games we loved – but we have to play them a decade after their original release, and not as the person we were when we loved them. And I did really love Saints Row. It has this kind of uplifting, ur-adolescent energy, where if you feel like you want to punch the world you probably can, and you can do it dressed as a witch or an alien. Also, I had a massive crush on Johnny Gat.

Probably still the most beloved of the Saints games (though I still have a soft spot for Gat Out Of Hell), The Third opens with a bank robbery seguing into a mid-air shootout on a plane, followed by an extended skydive. See, the eponymous Saints have taken gangbanging and made it a mainstream career. They’re famous. They have fans who ask for autographs, a line of energy drinks, and a movie is being made of their lives. So another powerful gang has decided to knock them off their perch.

Flights of fancy
You can obviously steal any car you happen to be within reaching distance of, but my preferred method of getting around Steelport is in the air. You have almost immediate access to helicopters, fighter jets, and a broomstick, if you fancy it. I frequently accidentally fly over restricted areas, and the feds can immediately tell. They have a sixth sense for that sort of thing. 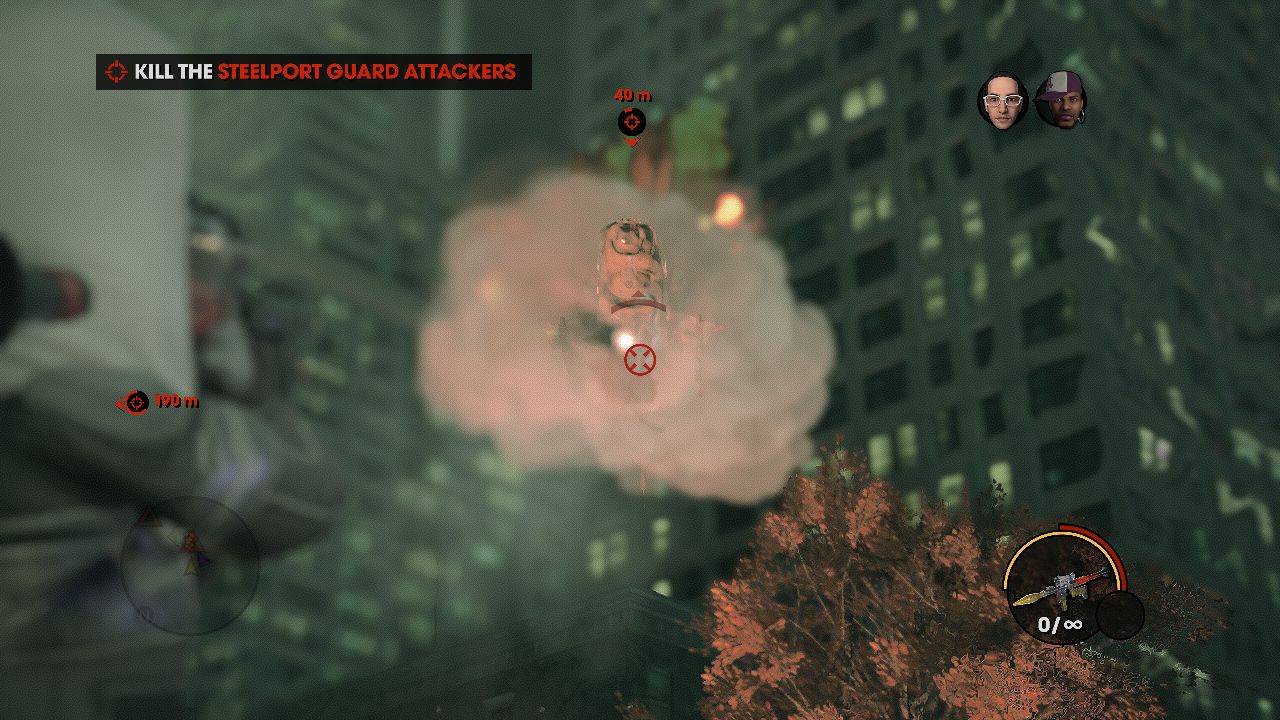 Wot I did on my holidays: explode a police helicopter

Some of the more fun bits actually came as DLC, but you get them all here. There’s Professor Genki’s Super Ethical Reality Climax, an illegal gameshow where you shoot people dressed as animals or beer mascots, or The Trouble With Clones, where the Saints self-described biggest fan has made a clone of perennial favourite character Johnny Gat, and it is on a rampage. But even the main story missions have peaks. There’s one almost iconic one very early on where you parachute out of a helicopter onto a penthouse, whilst Power by Kanye West plays. Then you shoot a load of people in the rooftop pool. 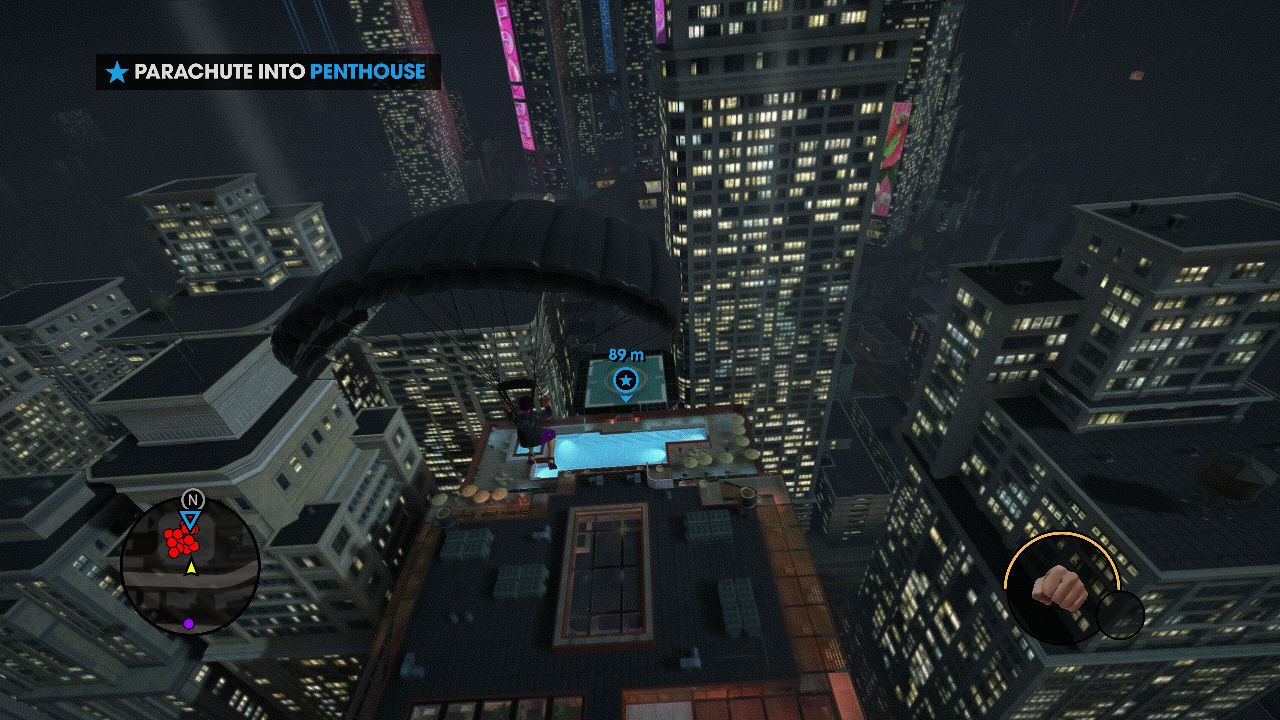 I’m living in that 21st century, doing something mean to it –

If it sounds like I’m struggling to describe any standout hilarious bits, or muster much excitement, that’s because I am. For all the bravado and bombast, playing Saints Row The Third in 2020 felt dated. Not in an “Ooh, you couldn’t get away with that now! Political correctness gone mad!” way. The explosions, the tits, the hilarious dildo… all of it just washed passed me. I felt like a teacher staring wearily into space as, around her, her charges throttled each other and shat on the desks. It was weirdly anaemic. The guns all felt the same, the missions all blurred into one. Exploding a bunch of alien spaceships seemed no different to punching a pedestrian in the face.

Remasterful work
The remaster is good, yes, but I’d recommend toying with the graphics settings a bit, particularly the sharpening. The defaults meant the game looked distressingly ropey when I first booted it up. Some of the edges looked like they’d been cut with a bread knife. Still, nothing that a bit of fiddling with sliders didn’t sort out.

In fairness, that isn’t really the remasters fault. And the remaster bit of the remaster is more than decent, especially with the improvements to lighting and the frequent explosions (I am told that particle systems have even more particles for example). Attention has also been lavished on the character models for the main NPCs. All in all, Saints Row The Third: Remastered looks exactly how you remember the original looking, which is to say way better than the original actually was. 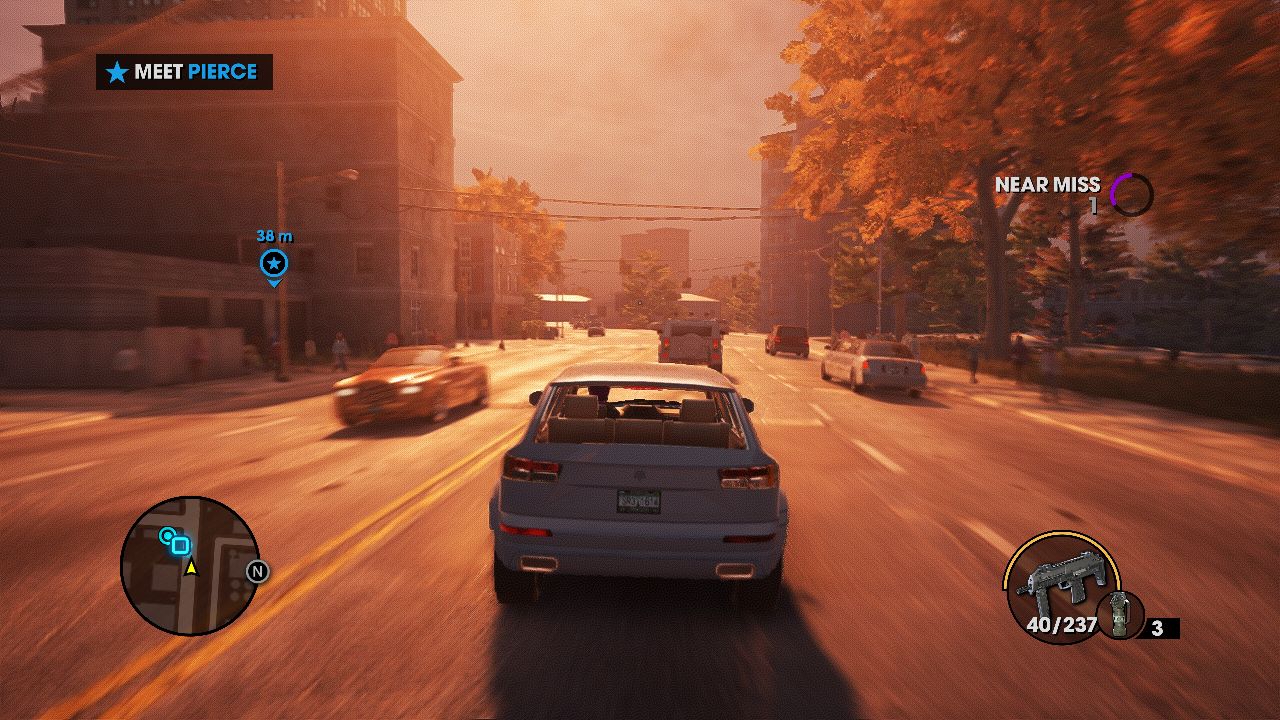 Into the sunset with you

It’s just the content, I suppose, that doesn’t charm me any more. It was like playing the FPS version of a top down ARPG like Diablo or Wolcen. Yeah, I’ll shoot the waves of oncoming enemies. No, I don’t particularly need to know why. I’ll do it again in another mission in a minute. Blah blah blah, strip club, blah blah blah, chop shop. Oh Saints Row. It is not you that have changed, but I.