Minecraft Dungeons may have borrowed very little from its parent game in terms of features, sticking largely to the blockbuster construction game’s aesthetics instead, but that’s not to say it hasn’t given plenty back. While Dungeons was being developed, according to executive director David Nisshagen in my interview with him, its team came up with illagers, a.ka. angry squidwards, in order to provide a staple humanoid mob for the player to batter by the dozen throughout the blocky ARPG’s levels. But the idea was swiftly nabbed by the regular Minecraft team, and before Dungeons was even in the game, illagers were HARR-ing their way across Minecraft worlds from the spring of 2019. So, if the folks at Mojang are open to sneaking elements into Minecraft from its younger sibling, what else should make its way in? Here’s my pick – but let me know what you’d like to see make the jump across in ye olde comments section. 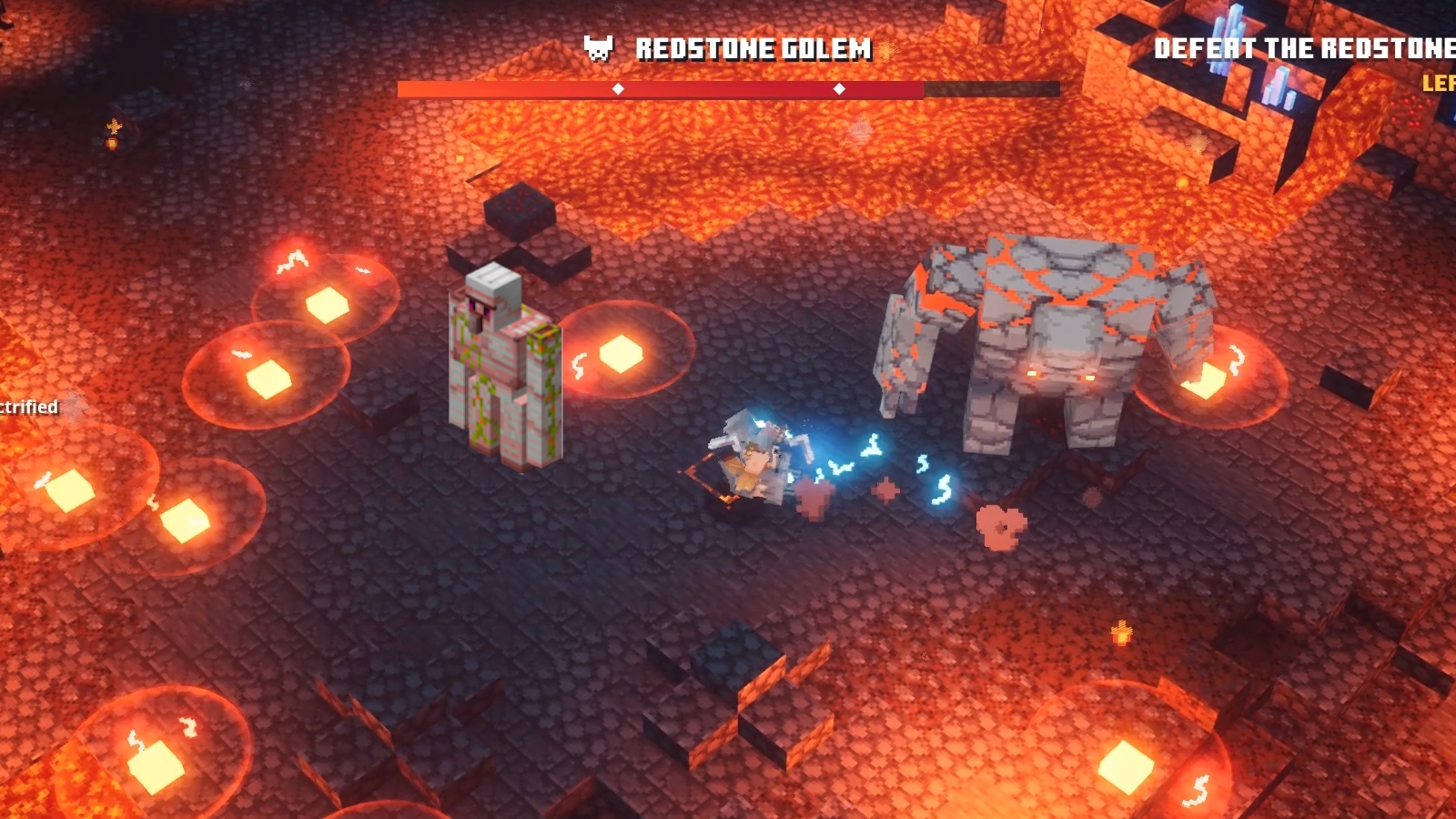 You vs the guy she tells you not to worry about etc.

Another mob, the Redstone Golem is one of Minecraft Dungeons’ bosses, and makes the Iron Golem – which villagers currently create to defend their pathetic collections of hovels from zombies – look like a total disgrace. RG is big, red and angry, and would make a fantastic underworld counterpart to Minecraft’s current roster of boss monsters. After all, nobody goes to the End to fight its slightly rubbish looking dragon, and the Elder Guardians, who are sort of cyclopian fish with skin conditions, only show up if you decide to loot an underwater temple. And as for the Wither, a sort of confusing skeleton with three heads… yeah, I’d forgotten that existed until I wrote this paragraph. 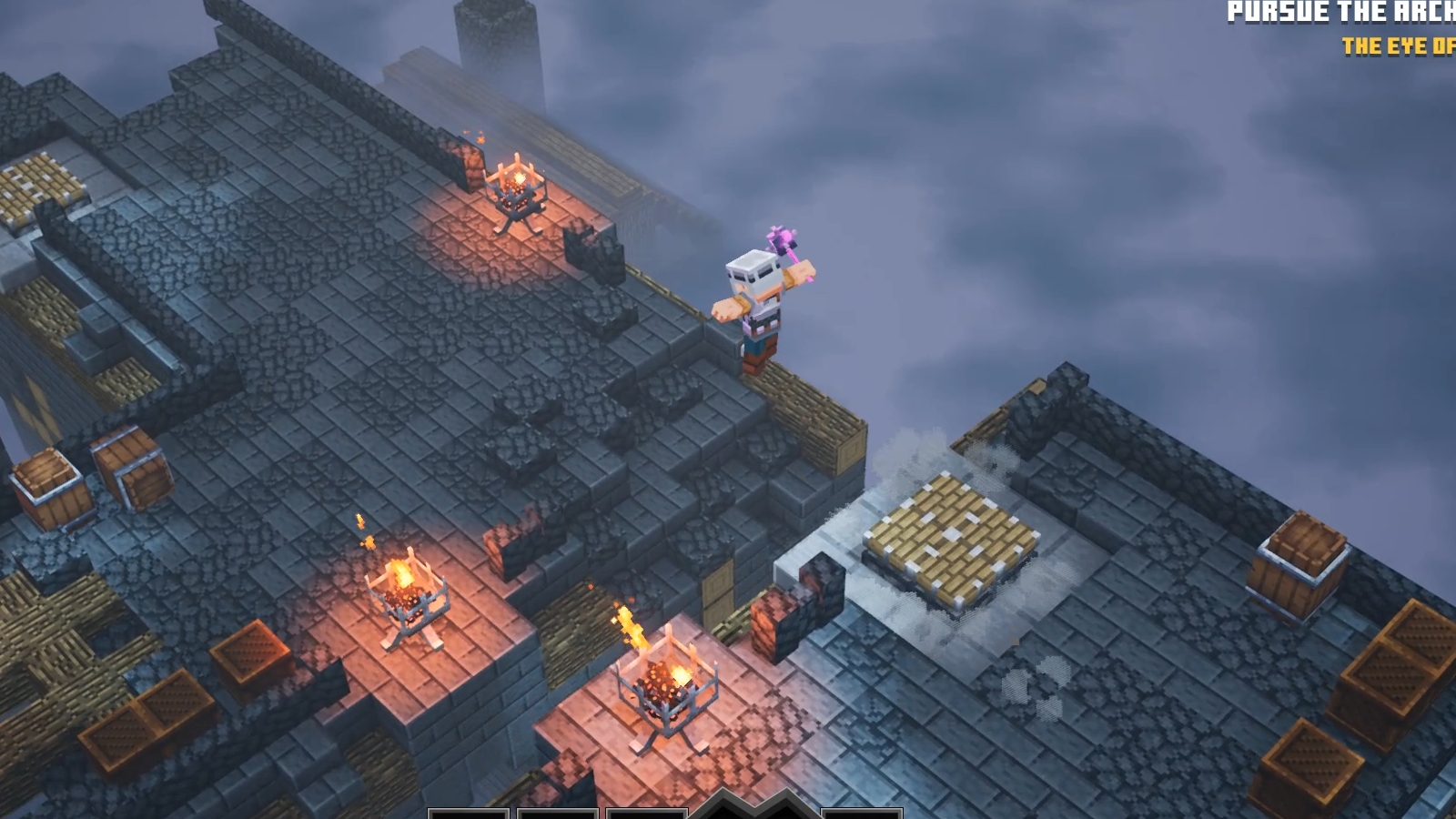 In one of Dungeons’ levels you run across the rooftops of a castle, which you traverse by using these satisfyingly springy platforms to bounce between turrets and battlements. It looks a bit like a piston block from regular Minecraft, and I can already hear the raising of a thousand index fingers as redstone nerds prepare to “actually” me into the ground, with explanations of how this is already possible with mods and/or a phD level knowledge of the game’s weird machine-making system. And I know there’s slime blocks too, but they’re mostly just good for making bouncy castles. What I want is a single block you can slap down wherever you fancy, and use to jump about the place. It’s not much to ask. 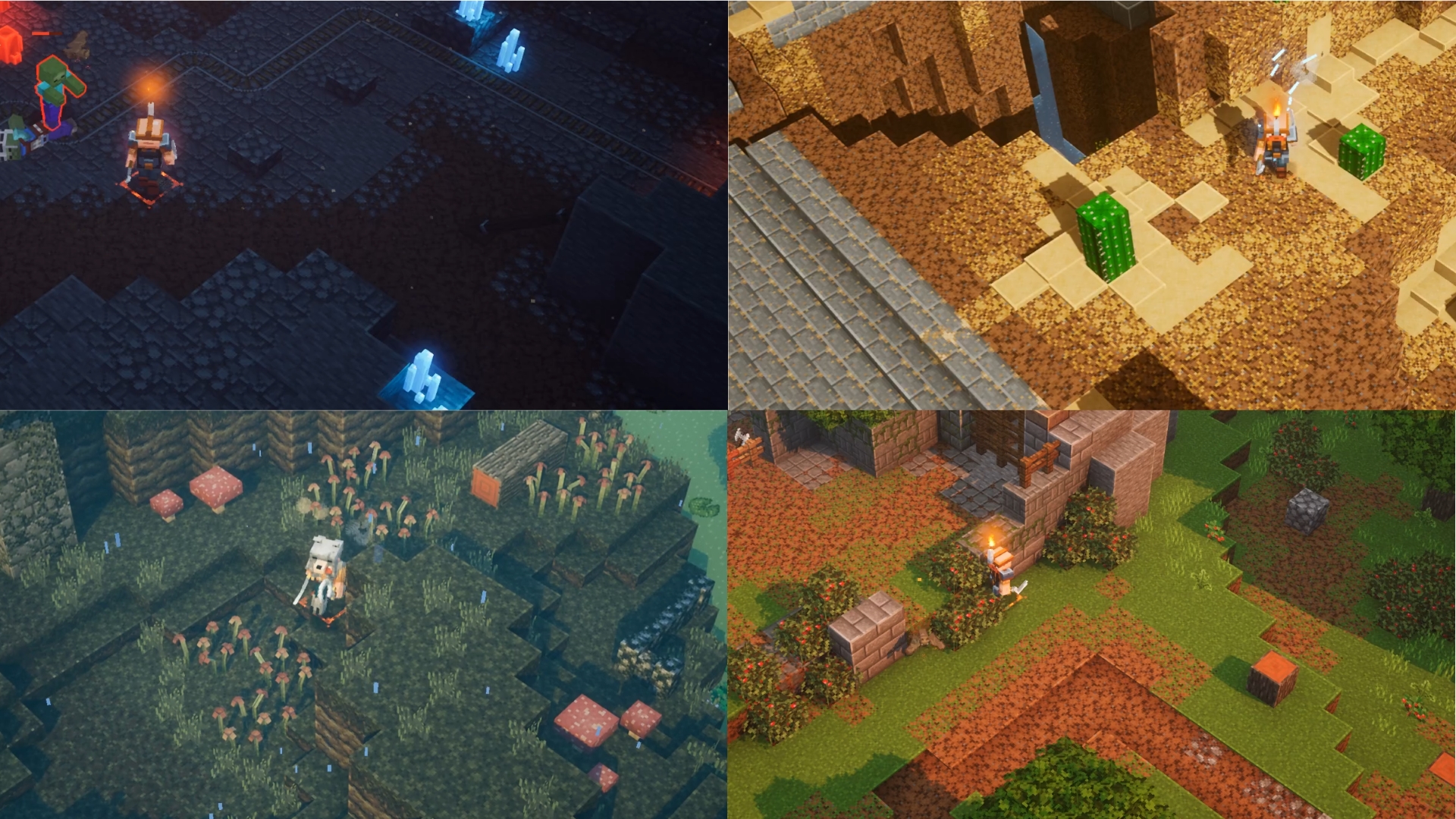 A whole new world of dirt.

This is a humble wish, but possibly my most fervent. I play Minecraft to build stuff. And as such, the most exciting part of any update to the game, for me, is any blocks which can be used to make builds look more interesting. Grindstones, for example, were fine as weapons sharpeners, but bloody brilliant as impromptu pulleys for cranes, and toilet roll holders for my various pharaonic bathrooms. But what I’d like most of all is just… dirt. Or at least more variants on some of the most basic blocks there are. The best way to make a big build less monotonous, or make landscaping look more natural, is to add little variations to break up big swathes of identical blocks. The Dungeons team knew this, as you can see from the screens above: there are rock/dirt mixtures, patchy grass, swampy reeds, and even stone blocks with a dusting of sand. Blocks like these wouldn’t need any special qualities or unique interactions – they’d just look nice. And with the textures already designed for Dungeons, they’re halfway there already, surely? 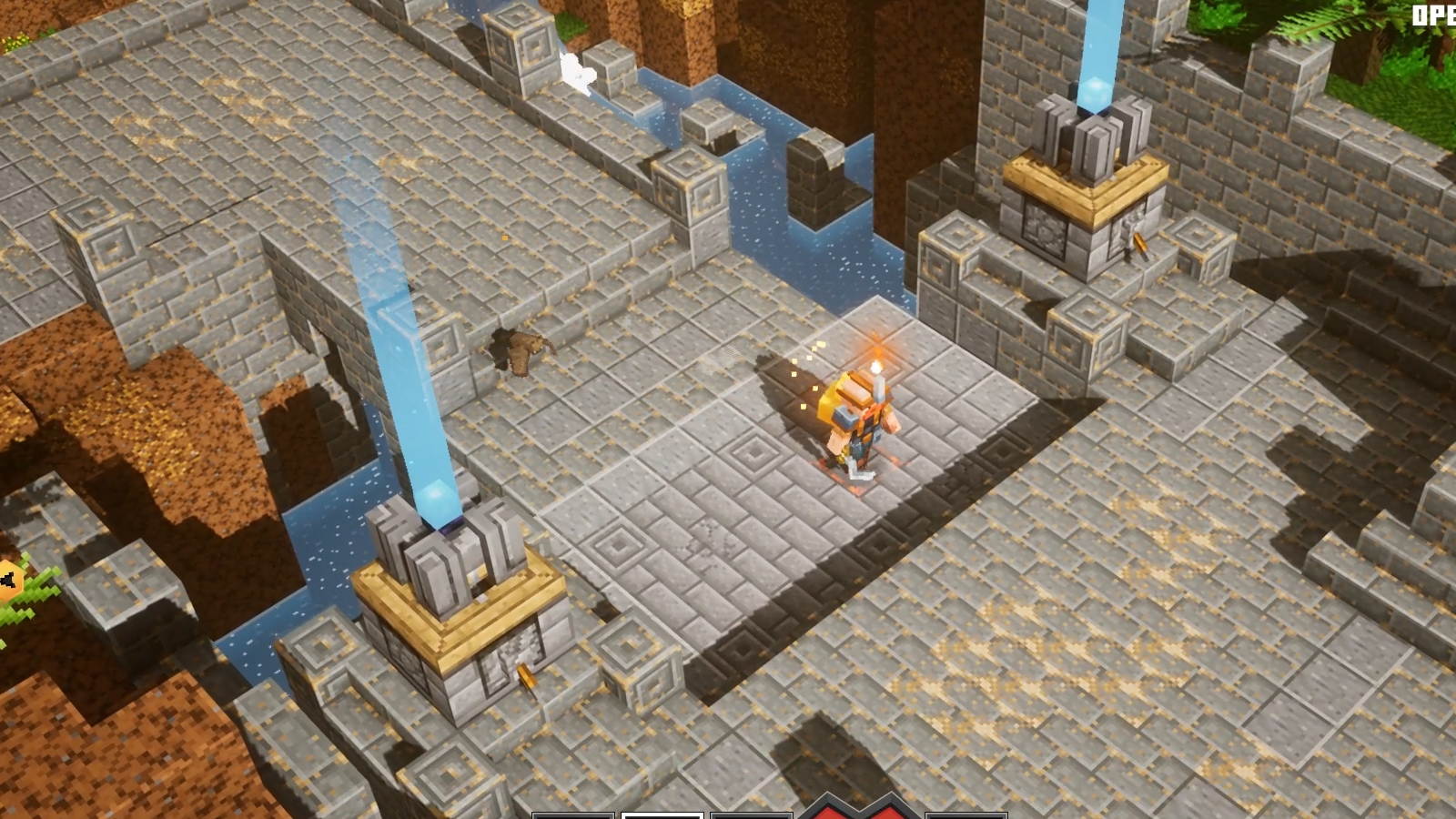 Who wouldn’t want this guy as a best mate?

One of the armour sets in Minecraft Dungeons gives you a little mate who’s a bat. I suppose he helps you by pecking away at enemies with his little smiling face, but who cares: the main thing is, he’s a bat, and he’s your mate. Bats are already by far the most pleasant mob in Minecraft, and never fail to cheer me every time I see them flapping about and squeaking, so I would be a happy fellow indeed if I could have one following me around all the time. 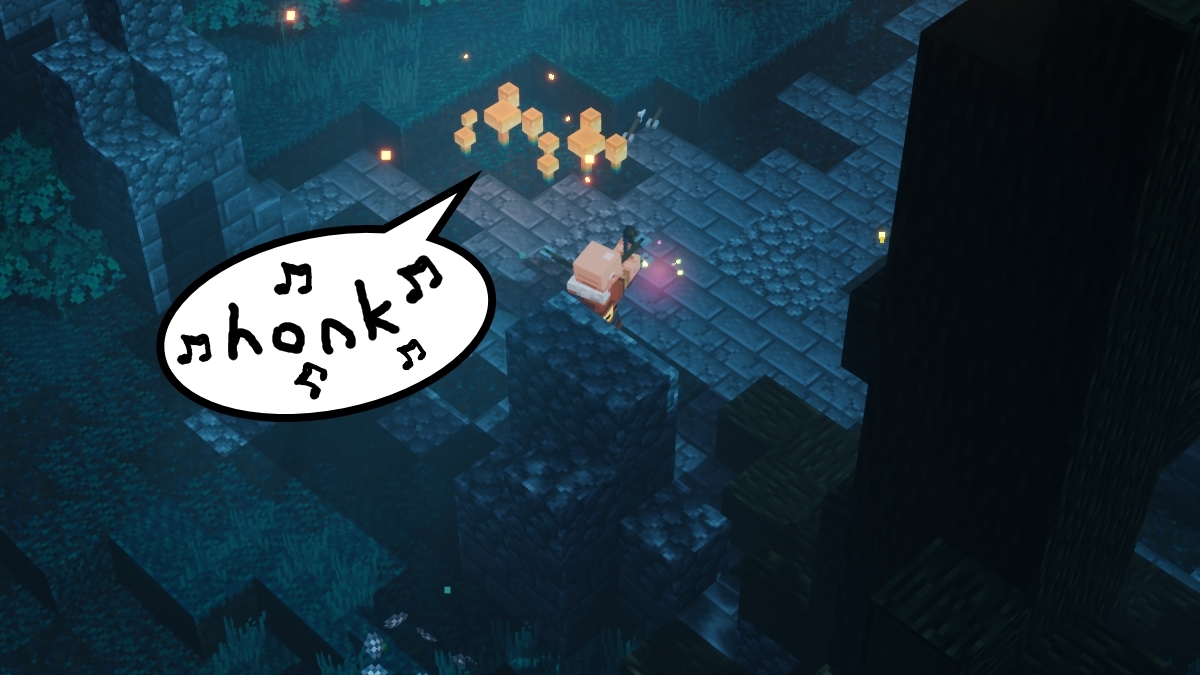 I have added the sound effect for the sake of your immersion in this post.

Mojang have always been good at adding whimsical, playful little features to Minecraft, which serve some tiny purpose in play terms, but are mostly there just to make the world more interesting. For example, I discovered yesterday that dolphins like pushing dropped blocks around, and will play with them like real dolphins play with seaweed clumps or dead fish or whatever. I built a big swimming pool and then spawned about thirty of them and had them go mental with a single egg, it was great. Anyway, in Dungeons’ inevitable spooky woods level, there are little clumps of mushrooms that honk tunefully in the key of whatever music is playing at the time – and if that doesn’t seem a total shoe-in for a Minecraft feature, I don’t know what does.

Anyway, that’s my list for starters – what would you like Minecraft Dungeons to give to its digital dad for father’s day?