Elite Dangerous finished a second beta test for its new fleet carriers this week. The giant player-owned ships are scheduled to appear in the main game sometime in June.

I’ve been ruminating on it for a while now, and much as I like the idea, the reality so far has been distinctly underwhelming. 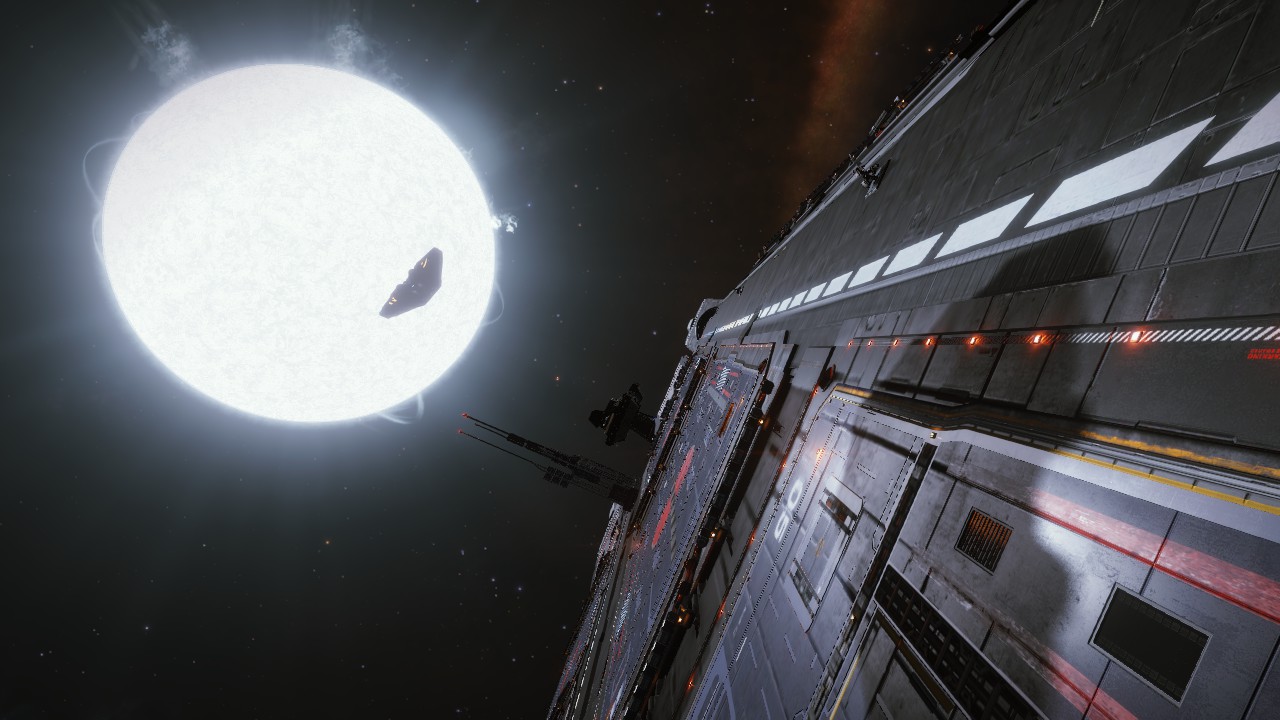 I found a private one and flew passive-aggressively close to it for a photoshoot.

The first obstacle is actually finding a place that sells one. There’s a filter for that on the map, but that only shows up if you’ve already visited a system with a vendor in the past, somewhat defeating the point. They are also painfully expensive, with a 5 billion credit price tag for a barebones model with few functions. There are ongoing operating costs too, even if you’re offline (you can, however, get the cost of the carrier back if you decomission it, so it’s at least somewhat reversible). They’re not pilotable, either. Moving them is a case of selecting a target system and waiting for it to jump while you sit in your regular ship, with nothing to look at but the usual docking bay. So why would you buy one?

There are two main prongs of its attack on your disinterest. The first: it’s essentially a mobile base for you and whoever you want to bring along. For players who like to roam (of which Elite has many, probably most even, given that exploration is a defining feature of the game. I’ve already discovered a dozen or so planets and I wasn’t really looking), that carries an obvious benefit. Being able to refuel and rejig your exploration ship means one less thing to keep track of, and reduces that amount of compromise needed in your equipement loadout, since you can switch to another ship or swap modules around back at home. More importantly, the second beta brought the Universal Cartographics service to them. This is where players cash in their exploration data, and register any new discoveries, removing the danger that you’ll lose all your data if you crash or have to call for help from the fuel rats. 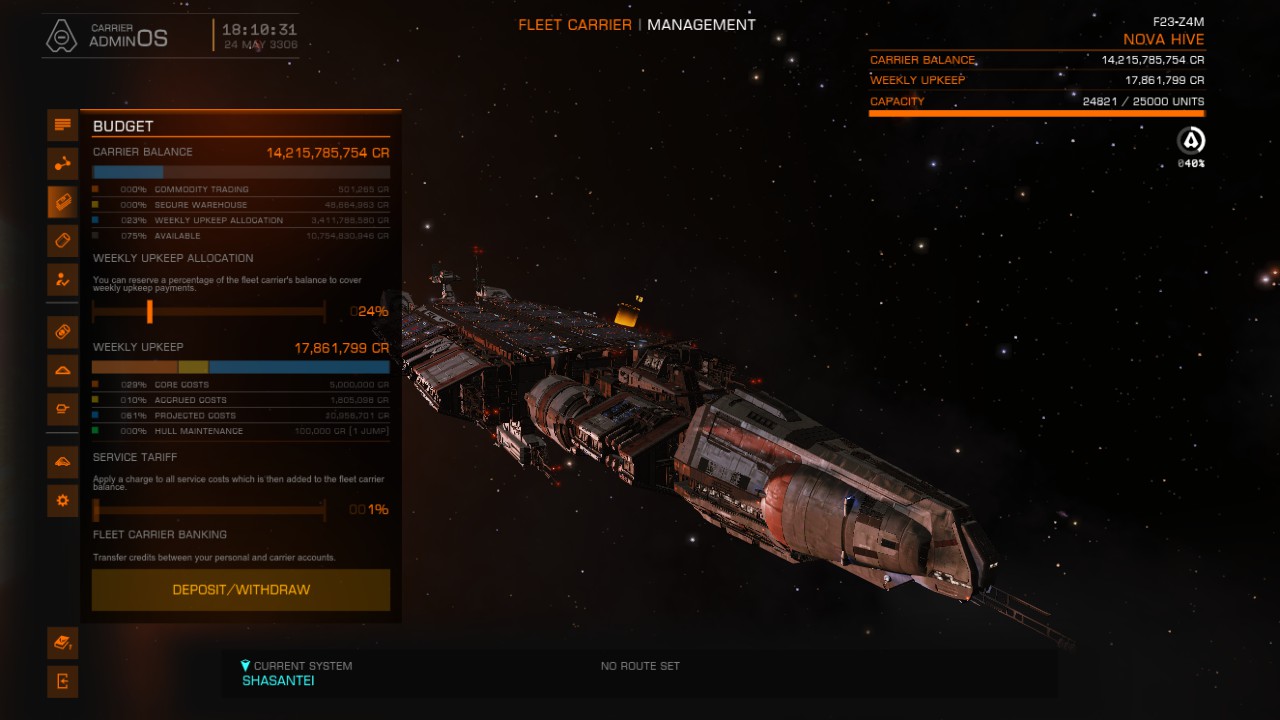 The interface is a damn sight better than the existing navigation UI. Which is superbad.

But to actually fly a carrier anywhere you must gather a massive heap of expensive tritium fuel. If you’re out exploring, that means a great deal of repetitive mining, which sort of defeats the point. If you’re in more settled space you could buy it instead, but it doesn’t come cheap, and you still have to manually fly it in chunks to your carrier. Visiting players can opt to donate their own tritium to help out, at least, which leads into the second prong. We don’t get to say “prong” enough. Prong. Pronggg.

The second bit (oh no!): Carriers can act as a public, player-run hub for markets and services. Assuming you don’t lock access to the public, up to 16 player ships can dock at a carrier, even jumping through hyperspace with it. There’s a neat series of tannoy announcements as the beast runs a long countdown before jumping, and while docked, ships can buy and sell goods, equip their ship, and even buy new ships outright. Basically any service that you can get on a station, except for running missions, can be set up for other players on your carrier, provided you activate and manage the right modules. 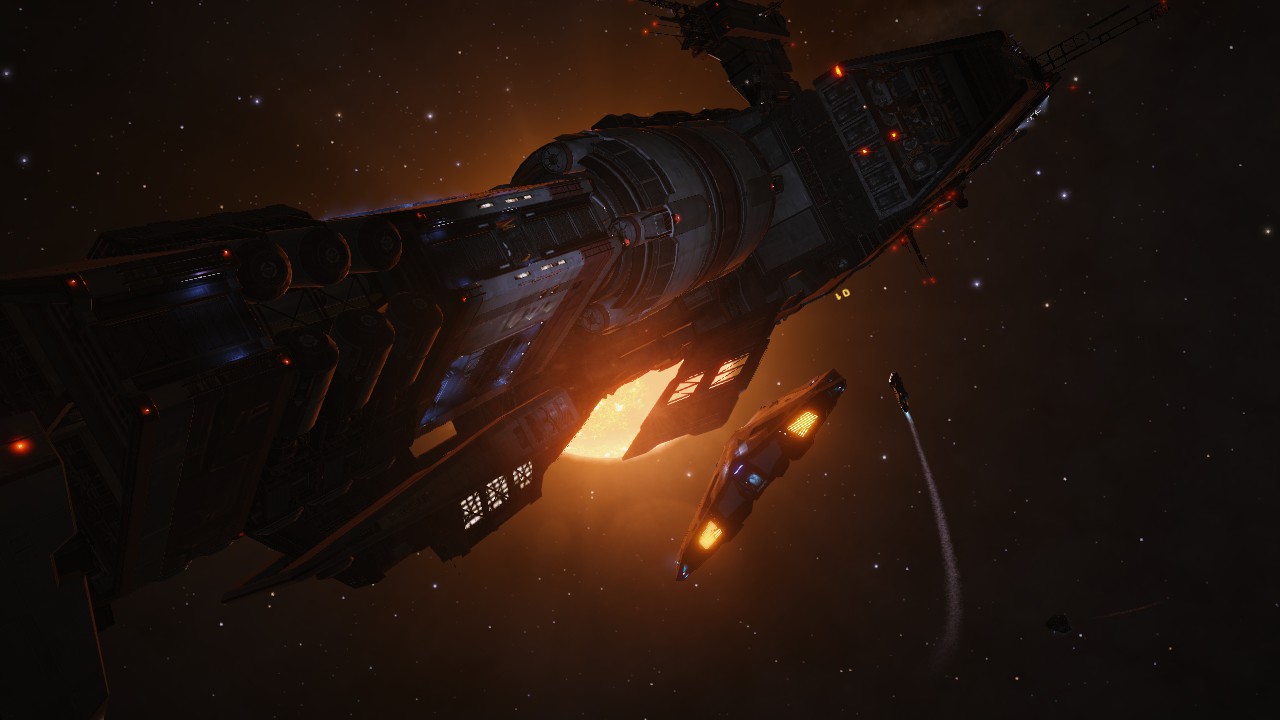 AI system ships automatically patrol it for you. They kept scanning me, the little gleets.

The market might have the potential to get interesting. In theory. It’s a bit of a hassle to set up, requiring manual prices and stock paremeters for every item you want to trade, and currently not allowing buy and sell orders to run concurrently for the same goods. This means you can’t really set it up to generate profit without supervision, and most disappointingly, you can’t use it to launder pirated or illegally salvaged goods, as these retain the ‘stolen’ tag even after you sell them there. Those things could perhaps be amended, but they lead in to the fundamental problem: there’s nobody to actually do any of this.

I’ve been playing Elite Dangerous most nights for a couple of weeks. I played little else all through a four day weekend, and the only way I’d even be able to guess that it’s multiplayer, let alone an MMO, is its lack of a save function. I genuinely don’t know if I’ve even seen another player, much less interacted with them. While the prospect of some degree of player-driven economy is interesting, and perhaps what the game needs to make the world feel more alive, it will take far more than the fleet carrier to make that happen. NPC ships dock and launch, but don’t do anything once they’re inside, and any system where other players are common are likely to be catered to by existing stations anyway.

Perhaps they’re Just Not For Me. I freely admit that in the course of normal play, I would never make anywhere near enough space cash to even consider one (Frontier gave us an account with a ludicrous and genuinely intimidating 15 billion), and I was disappointed to learn that it’s not possible to play chicken with them or fly one into a black hole. But other players seem to have equally tepid feelings, with some real ire directed at their extreme costs and apparent lack of… well, point. 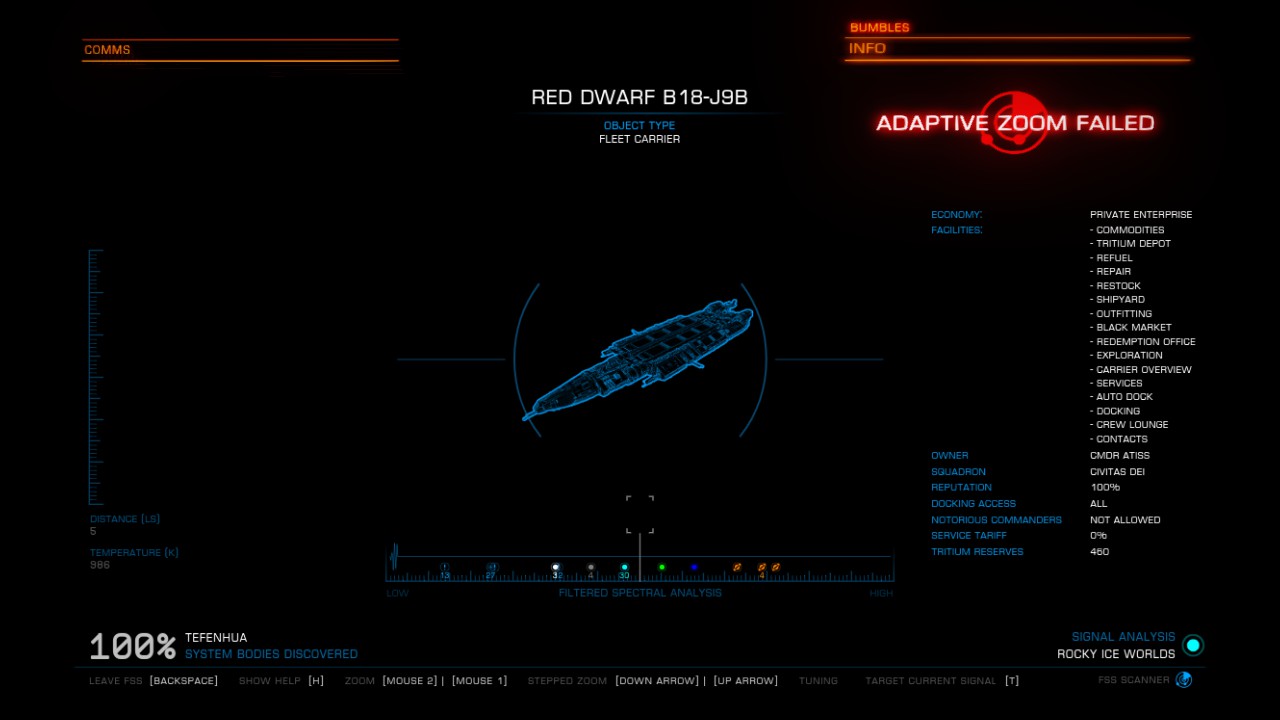 You can scan player ones down before landing at them. Or don’t. These are some things that are possible.

I love the idea of the fleet carrier, and when examined in isolation it’s a solid concept, with potential, that’s been implemented mostly well. And the eyewatering expenses and limitations of the market modules may be addressed – the whole point of beta tests is to gauge and tweak these things, after all. But I can’t help thinking of how PlanetSide 2‘s fleet carriers shook the game up to its highest player counts for six years and gave me some breathtaking moments just by their secondary effects on players who weren’t even directly fighting or supporting one. It’s unfair to juxtapose such wildly different games, but the carriers in PlanetSide 2 fit in. They connected game systems and player activity.

The reasonable conclusion to infer is that Frontier are establishing groundwork for their coming Next Era update, which has remained something of a mystery since development started in 2018. I’m curious to see whether that will bring the fleet carrier into its own when it releases next year. But right now it’s like having a really nice wok in your bedroom. Who’s cooking in there?