Listen, we’re not having a pop at the base game version of The Sims 4, but you have to admit that it doesn’t offer everything you might want. It would be impossible for it to service every whim and desire you asked of it for! But still, sometimes you’ll be fooling around in build and buy mode, or Create A Sim, and just wish that you had more space gubbins to wear or cool plants for your kitchen. Or bunk beds! Lord almighty, if only there were bunkbeds.

Well, it just so happens that there are, if you know where to look. And that place is ‘at custom content’. There are some amazing creators out there making simply fabulous cc sets to make every Sims game your best version of it. And cc is all free! How amazing is that? That’s why we’ve rounded up all our favourite cc sets in one place, for ease of use to you the reader. Read on for more.

First of all, though, if you don’t know how to download cc and slap it into your Sims game – welcome! You’re really going to enjoy it. And secondly, you should check out this video on the Rock Paper Shotgun YouTube channel that tells you exactly how it’s done. It’s only five minutes long, will teach you how to install mods and custom content, and also clue you in on the exact difference between cc and mods.

You should also know that whenever The Sims 4 gets a patch (usually at the same time as a new EA approved DLC is implemented), that update can ‘break’ cc so they don’t work as well as they used to. Maybe your Sim will no longer sleep in the top bunk of your cc bunk beds, that kind of thing. If that happens, you should check the mod page on The Sims Resource or any social media pages the creator has – they’ll usually be aware or let you know if they’re working on an update.

On to the fun bit! We’ve gathered a bunch of really amazing cc, by a bunch of different creators, all in one place. Most of these packs are meaty, with a good chunk of items and loads of colour swatches, so they’ll really change the options you have for your house builds and Create-A-Sim. We’ve got a mix of styles to suit all tastes, from the rustic to the truly out of this world, and a good mix of cc to cover both CAS and build and buy.

For this list (taken from the cc recommended in this video and this video on our YouTube) we’ve provided descriptions of what each bit of cc offers, but if you’re not fussy and you’d prefer to skip straight to the downloads, we’ve got a list of links on the final page. 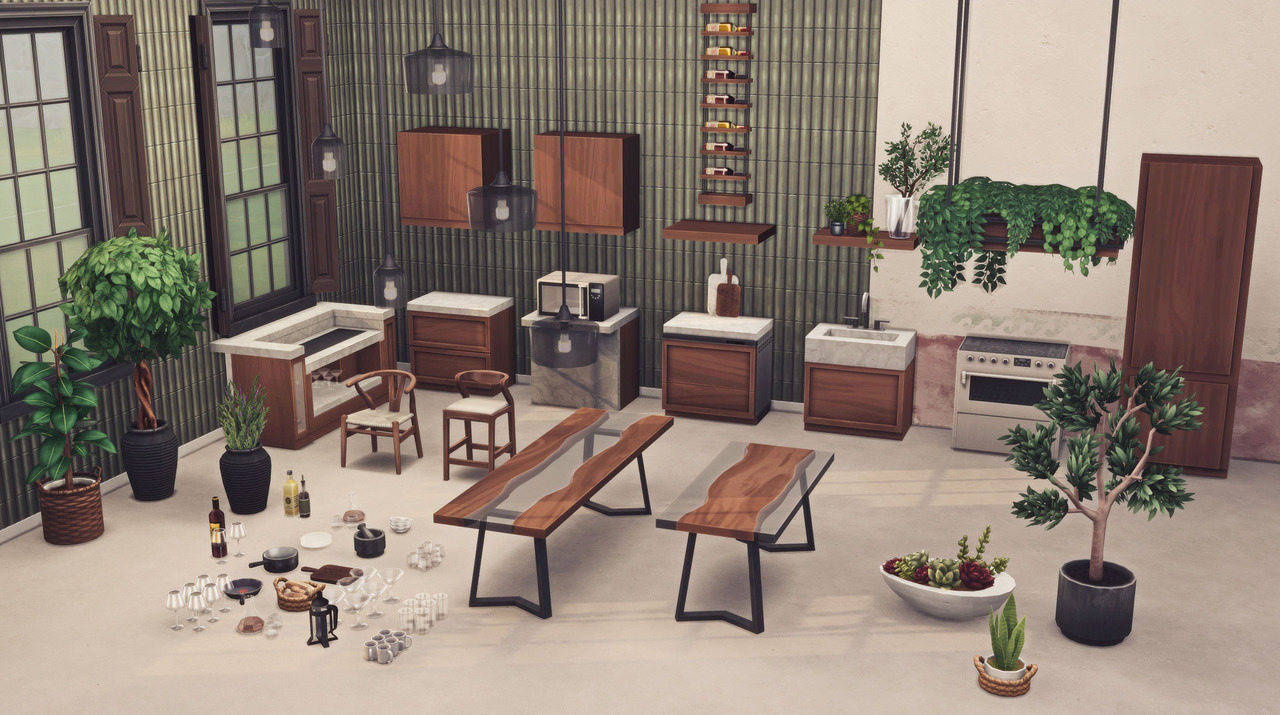 The Kichen Stuff Pack by Harrie and Felixandre

Who doesn’t love kitchens? Heart of the home, etc. etc.. So imagine our excitement at the discovery that a whole fan-made stuff pack has been made, solely focusing on kitchens? The Kichen (misspelling intentional) is a stuff pack created by Harrie and Felixandre, who are both well known creators in the Sims world for their custom content and their incredible builds.

With 56 pieces in total, the Kichen pack has 64 counter swatches, new meshes, edited Maxis meshes, and is entirely Maxis Match (meaning that it looks as though it was created by the Sims team for the base game). This pack is truly amazing. It’s got some fabulous tiny details like a pestle and mortar, pots and pans, and even a little set of wine and some wine glasses. It’s an incredibly detailed pack and though it only comes with one counter and one island, the swatches are phenomenal, and will fit in any style kitchen, in any style house, and with pretty much every colour scheme you can imagine. 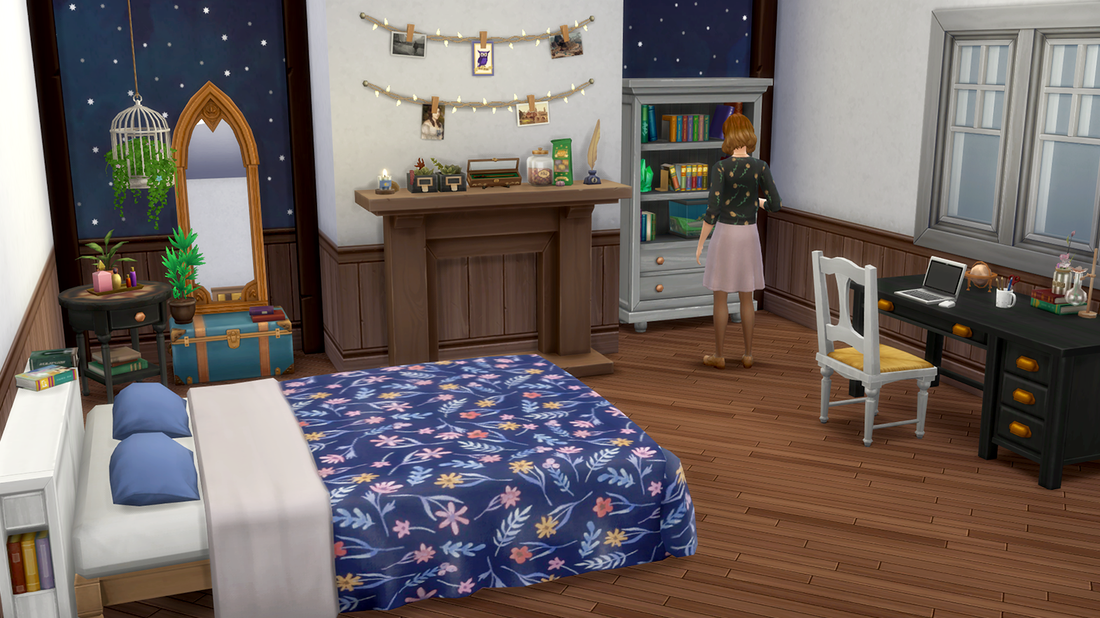 It’s a shame that Harry Potter doesn’t exist in the Sims world, despite the Realm Of Magic game pack. But maybe you should introduce your sim to Henry, because the collection in this cc is remarkable. And the best bit about this pack is that even if you’re not into all the wizardy bits, there are some swatches for both the Create A Sim and build and buy modes that are lovely even if you’re not a Potterhead. The beds with separate duvet sets and frames are some of the best you’ll find anywhere. There are even sets of readable books, and with all the soft furnishing clutter and chairs, this is probably he cosiest Stuff Pack you’ll ever lay eyes on. If you are a Potter fan, you’ve got everything you need to make a Potter themed bedroom. You can even take a test on the Pufferhead website to find out which Harnocks house you’re in: Alpaggard, Leetlefloof, Ivybell or Owlenmoon. 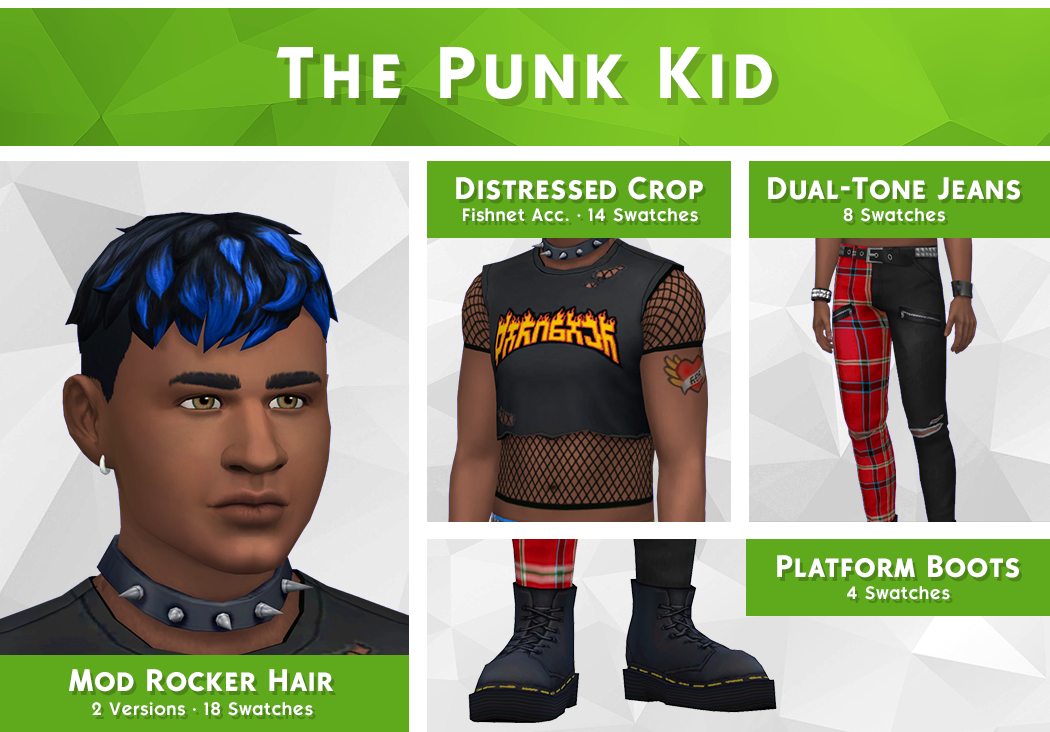 One of the biggest gripes in the Sims 4 community is the fact that the adults and teenagers look pretty much the same. Their clothes are the same, they’re the same height, they interact in pretty much the same way – it’s all a bit… bleh. This is where the Teen Style Stuff pack by Luumia and Synth comes in. This pack isn’t huge, and it’s all Create A Sim stuff, but it’s so worth a look. The clothes are just very teen in style, and it’s great. They break down into The Punk Kid, The It Girl, and The Athlete themes, but there are plenty of ways to interpret or mix and match everything together. It means this pack is really good for creating multiple looks for different styles of Sims with just one pack, especially with all the different colour swatches.

This pack comes with a whole lot, from an actual campus building (which is a massive 64 x 64 squares), to varsity jackets, re-creation of some old Sims 2 buy mode items, and even some university-esque pose packs. The campus itself is amazing, with a canteen, dorm rooms, a library, lecture rooms, the Dean’s office, and so much more. The dorm rooms are usable to a degree – it’s a library lot so obviously it’s not an actual residential lot, but you could easily get a group of teen Sims practically living here, as they’d have everything they’d ever need. A top tip would be to give this lot the trait “teens hangout,” but it’s been created using absolutely no custom content, and is available to download through the gallery if you didn’t want everything else with it.

We recommend downloading the whole thing for the best University experience, but do bear in mind that the University lot is absolutely bloody massive and may struggle to run on lower-end PCs. 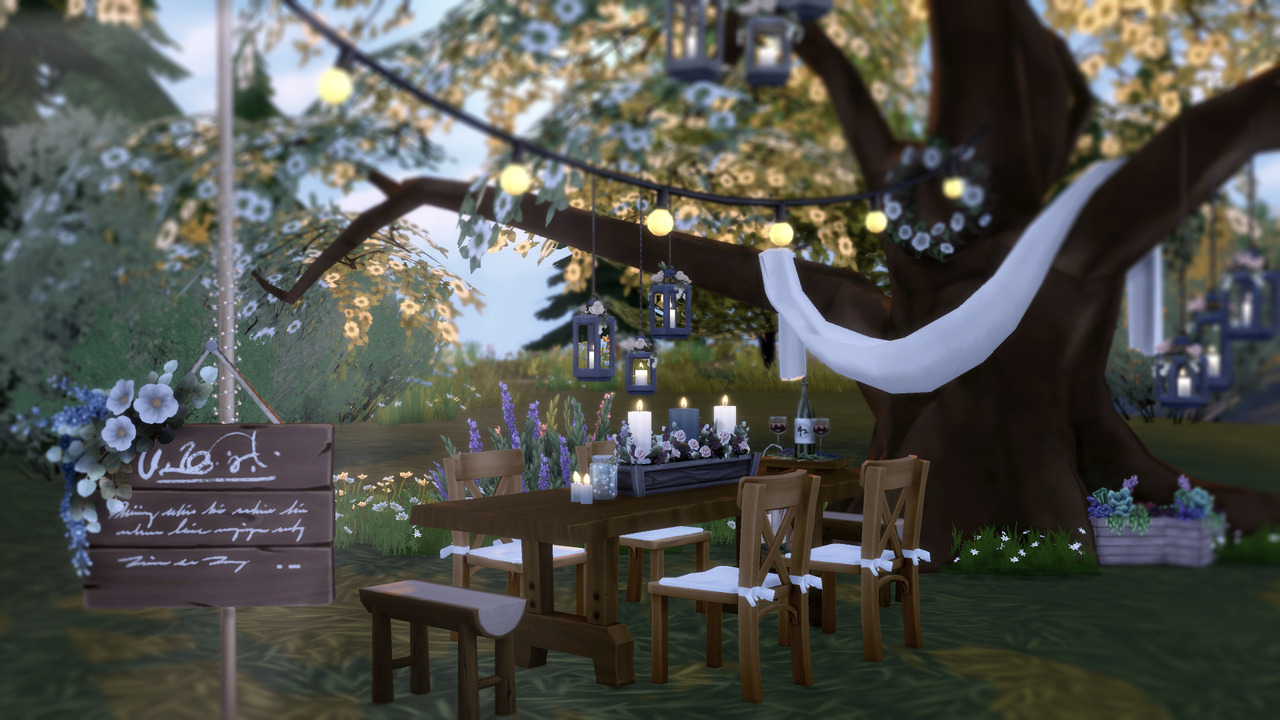 Only the first of a few Plumbob Tea Society packs we’re going to recommend, this is a really really cute bit of cc, and it’s all Maxis match. It adds loads of new clothing for all ages, and tons of new build and buy objects. It was actually released on Valentine’s Day back in 2018 (get in the bin, time) and it’s pretty wedding-y. But even if you don’t tend to bother with the whole wedding thing in the Sims, everything here is really lovely and can work as part of a beautiful garden setting or a general party, with 70 items to choose from in total.