Treachery In Beatdown City is a rare name that would feel perfectly at home both now and in 1990. I mean, honestly, who would be treacherous in a place called Beatdown City? It’s just asking for a particularly righteous kicking.

And that’s how it goes. The people in charge have betrayed the public trust, and it’s down to you to trust in your fists to put things right. It’s a bit great.

The setup and dialogue are pretty funny and playful with it. You’re doing your thing in the gym one day, and are rudely “mistaken” for a cleaner by Ugly John. This cannot stand, so of course he must be pummelled. Then your dad, who appears to be a Latino Reginald VelJohnson, breaks the news that the president has been, perhaps inevitably, kidnapped by ninjas. An obviously evil mayor has shut down the streets and the cops are doing nothing, so it’s your job to smack some sense into the city.

The chunky figures and particularly the punchy sound effects invoke my faint memories of Double Dragon on the Game Boy (did anyone else find that one spot by the pipes on level 2 where if you pressed up you’d fall through the floor and die? That bug is the most useless information I know), but unlike your typical brawler, Treachery In Beatdown City is sort of turn based. Or, perhaps a bit more like VATS mode from Fallout. It’s not as weird as it sounds. 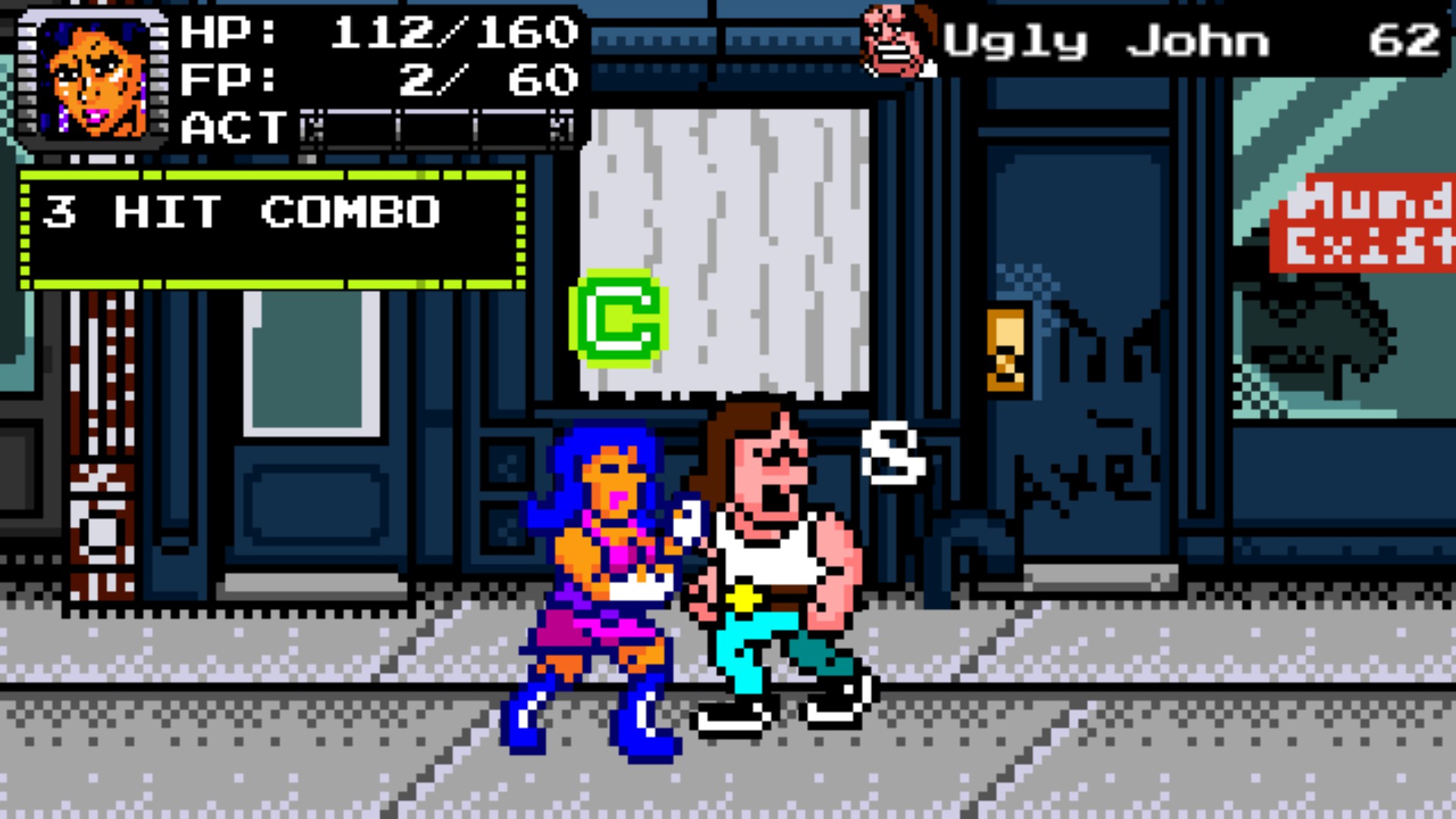 Some social ills can just be punched in the face.

Fights appear like the traditional 2.5D screens, and you can walk up to enemies and smack them, but only a couple of times, and for low damage. To really do damage you can press A to open an attack menu, where you can spend attack points to do combinations of punches, slowing kicks, grapples and so on, which you line up in a sort of JRPG style.

Then it gets clever. Once your attacks land (or not), you’ll need to let your points and energy recharge, which means backing off, or sometimes just soaking up the enemy’s blows. The jerks, see, can attack you at any time, and you have to choose how to defend yourself. Turn your back at the wrong moment and you’ll have to either endure a critical hit or spend more points to turn round.

I wouldn’t have expected such a hybrid to work, but it makes for a unique take on the retro facepunch formula. Having to actually think about your position and movement and the enemy’s weaknesses and how you can avoid their nastiest abilities gives it a little bit of strategy that brings a welcome depth to what is, bluntly, often a very one-note genre. It doesn’t get tedious or overwrought like turn based fighting sometimes can, nor does it feel like mindless hammering – there’s a bit in the intro that says “winners don’t button mash”, but this feels like a criticism of the genre rather than the player, and I respect that. I was also oddly charmed by the asides where you have slightly surreal conversations with your dad about the gym’s mobile phone policy, and glimpse adverts exhort you to “Drink cola fight someone”. It’s all very silly, and I like it. 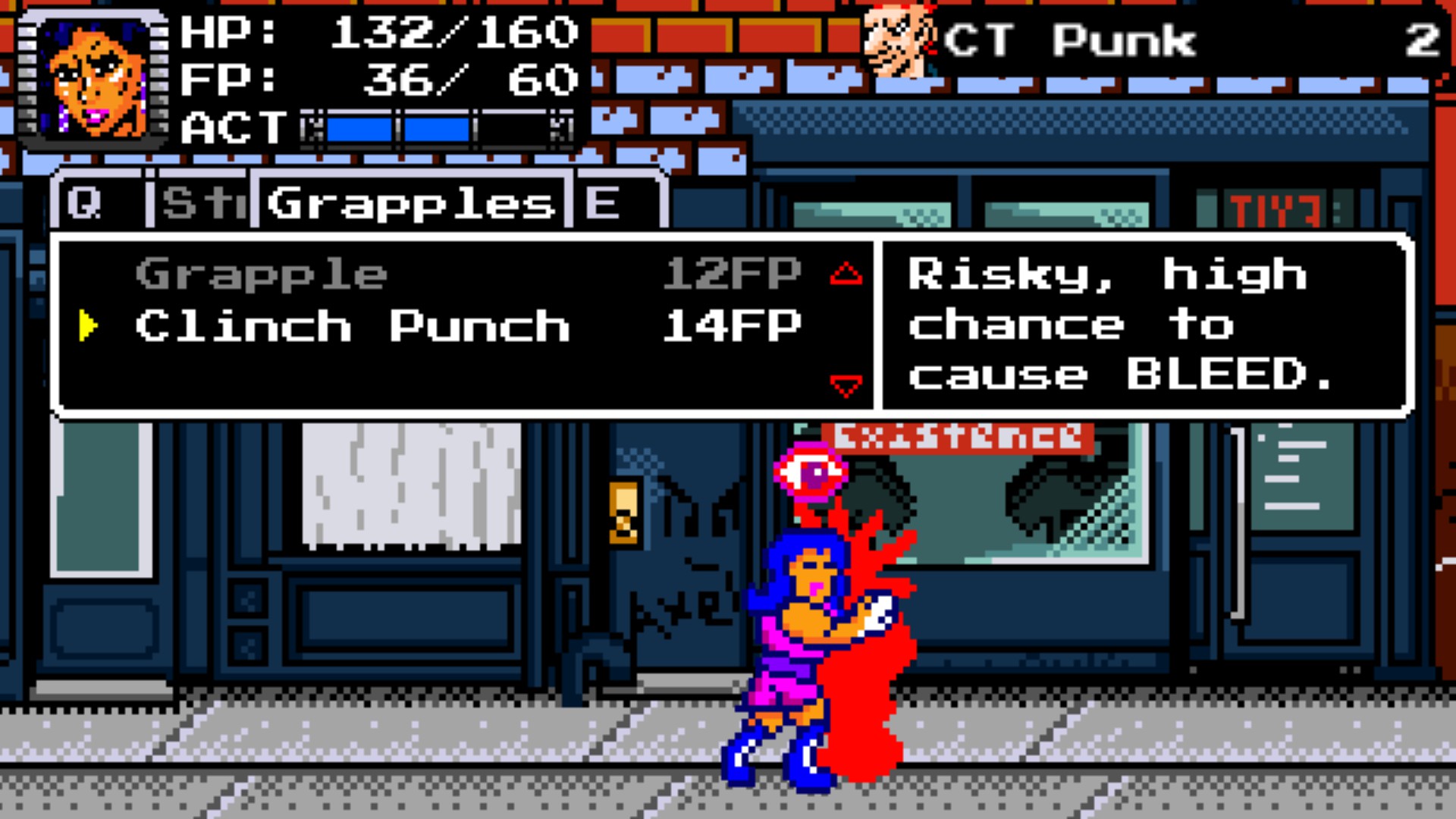 You gotta have 80s punks. You can’t have a street fight without cackling, faintly campy mohawk guys. And a boombox. And an ill-advised rap verse written by a white guy from Yale.

More about Treachery in Beatdown City

Treachery In Beatdown City has the best theme song ever