You could fill a stadium with games that deserve a bigger audience. This marks the third time I’ve written about Realm Of The Ghost King (including calling it one of the best unknown games of 2018, out of thousands). It’s now part of the Itch Bundle For Racial Justice And Equality, and I hope it finally catches on.

It is terrific. Even though it’s a roguelike. You are a ghostie. You want a shot at the king, and standing in between him and you is a legion of monsters. But you have bombs. Oh, that age-old tale.

It’s a perfect lunchbreak game, with even winning runs (I’ve had a mere handful) taking maybe 20 minutes. You flick through a series of small randomly-generated levels, taking ‘turns’ to move from square to square, triggering monsters to do the same. Moving into a monster hits it. Two hits will kill it (with a few variations for specific monster types). You can also spend a turn by dropping a bomb, which kill most things in a plus-shaped pattern, or activating your special power, which could freeze monsters, explode things around you, summon a little skellie pal to fight for you, or regenerate. 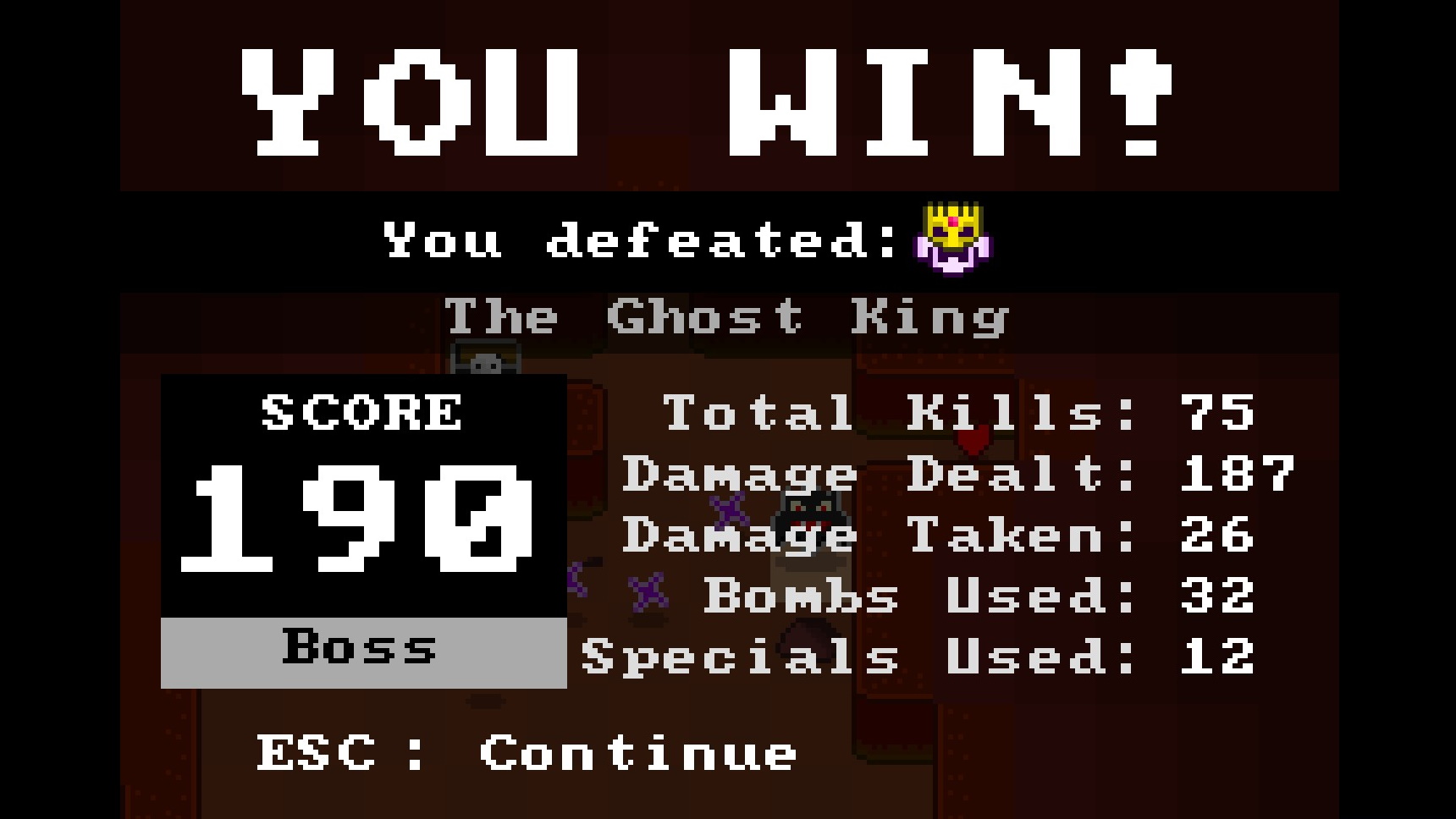 Won again last night, even with bad luck in the shop. The vampire bat is still a champ.

One of the things I tired of long ago is games that totally blindside you and call it “challenge”. Realm Of The Ghost King has secrets and hidden bits, but it’s upfront. It plays fair. It will take a few goes before you learn the rules of each monster, both as an enemy and as your own avatar (you start out as the ghostie, whose special power is a double move, and who I actually find one of the most difficult to play as), but that’s about it. With just a little practice, it becomes entirely about your ability to plan ahead and use your knowledge of the rules to outmaneouvre the monsters. You could analyse the whole level on each go, second-guessing every move, or you could be a wise and cool and sexy genius who just wings it, and only occasionally traps herself in a hopeless situation and has to blow herself up.

I love it so much I explained it to my ex while playing it at her on christmas eve. She was very patient. Watching the handful of people playing the daily challenges dwindle to nothing hurt my heart. Now it’s available for, mathematically, about a hundredth of a penny. None of you have any excuse. I will be keeping records.

The bundle on Itch is raising money for the NAACP Legal Defense and Educational Fund and the Community Bail Fund following the police killing of George Floyd. £4/$5 gets you over 1000 games and things, many of which are great.

Tagged with Itch Bundle for Racial Justice and Equality, Mantis-Eye Labs, Realm of the Ghost King.

More about Realm of the Ghost King