I’ve just invented a new dance move. It’s called the Squatting Witch. You grasp an imaginary ladle, and stir it slowly around an invisible cauldron while doing squats in time to the music. It’s my second best move after the Driving Crab, where you curl your fingers over a pretend steering wheel and steer left and right while scuttling from side to side. My hosts, who’ve been inventing their own moves for months, are well impressed, and congratulate me on my ingenuity. But we can’t muck about dancing all day, there’s work to be done. So I straighten out, compose myself and, after the rest of the crash team count me down from ten, take a running jump off a balcony and slam-dunk a human heart into a bin.

I am, of course, playing Surgeon Simulator 2. And it’s quite the thing.

I didn’t play the original Surgeon Simulator, but I did watch a fair bit of it being played on YouTube. The gag was, you had to carry out surgery from a first-person POV, but the game’s controls mapped different keys to every conceivable arm, hand and finger movement, so you ended up doing everything with wild, inarticulate movements that almost instantly made a mess of your patient. Thankfully, Surgeon Simulator’s bodies had more in common with anatomical demonstration models than actual humans, so the gore was extremely limited, and the inevitable operating failures always fell comfortably on the right side of the slapstick/harrowing divide. 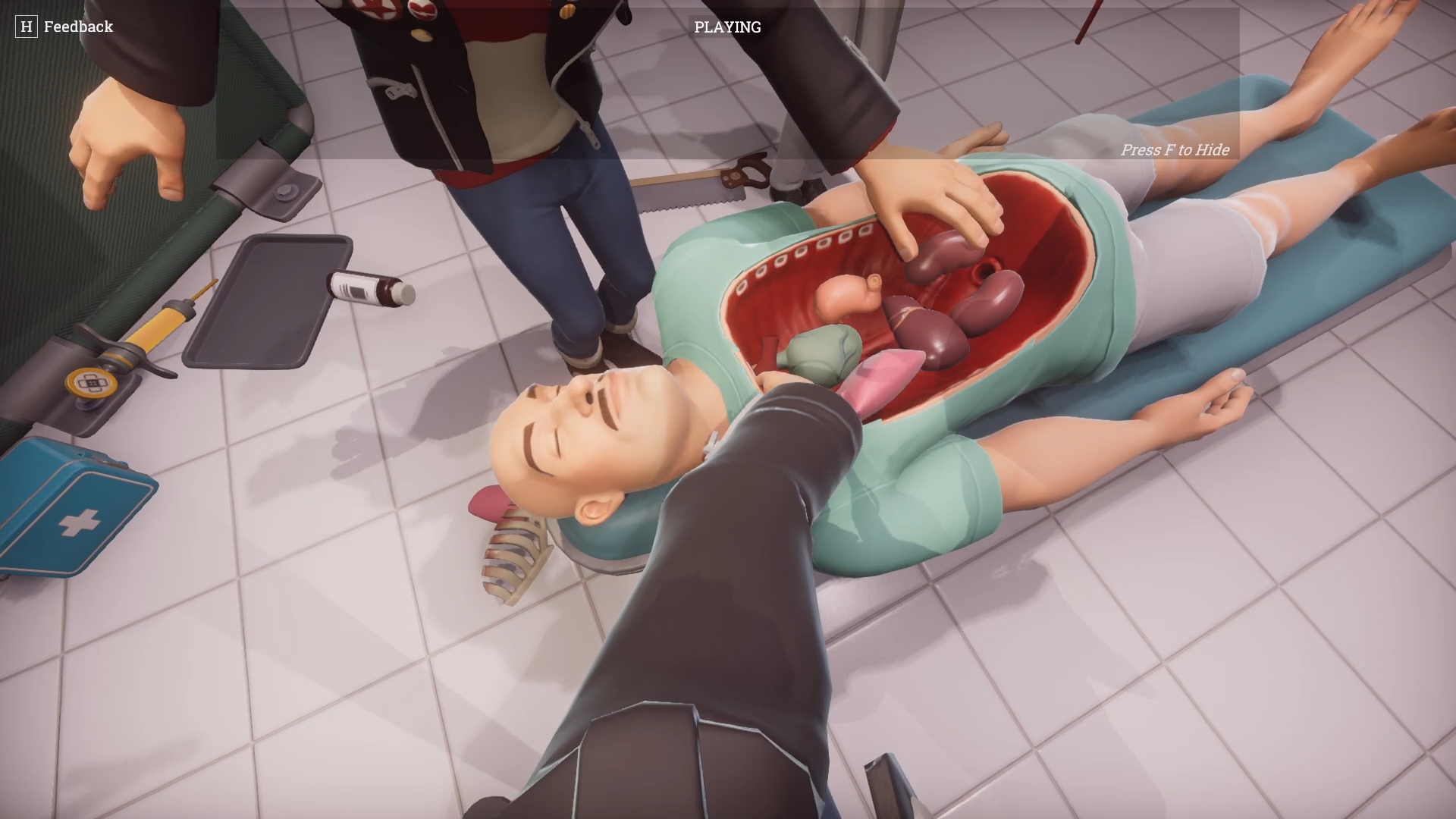 I am fairly certain this goes there.

When developers Bossa Studios invited me to play a preview build of the sequel (which will arrive this August, according to the PC Gaming Show just now), I asked whether I should get hold of the original to get myself used to the premise. But they said it would be better if I went in clueless, and made up my own mind as to what Surgeon Simulator 2 was about. It is, after all, a game about learning to become a surgeon: the game is set in the sprawling, eerily 1960s-ish Bossa Labs, a facility constructed, in the words of the developers, “to teach surgery to the masses”.

And what’s an education without other students to piss about with, right? The headline feature of SS2 is the fact that the whole thing, while playable solo, is built around 2-4 player co-op, and for this first lesson, my cohort of fellow learners would be senior producer Marc Pick and designer Nate Gallardo. Since virtually everything in this game is diegetic, the menu takes the form of a lobby area, where my colleagues met me (as cheery med student models with permanently outstretched arms) and talked me through the basics of the many, many controls. 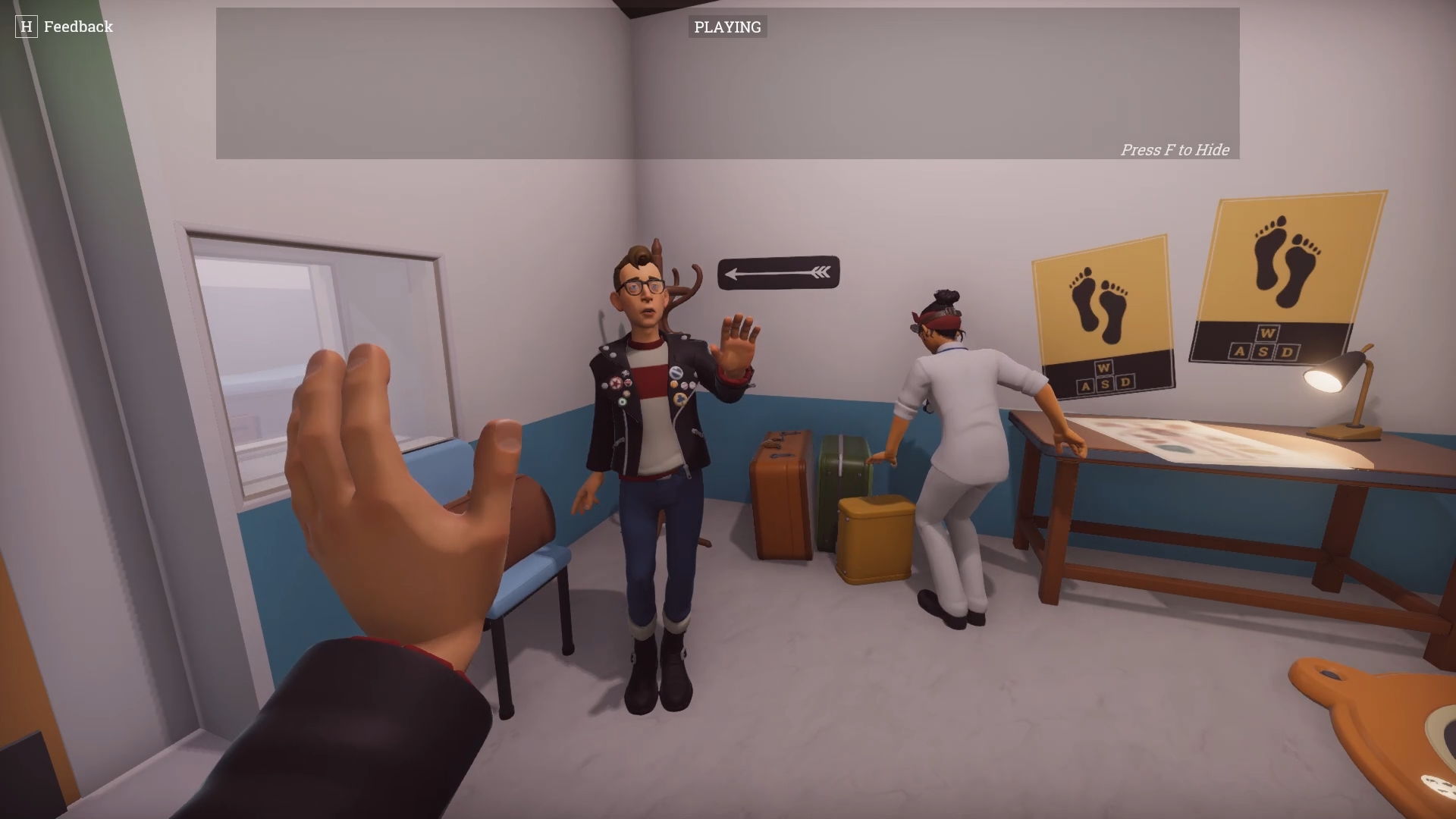 Learning to wave hello: it’s like a really weird remake of the boot-up sequence from Robocop.

It was a bit like what I imagine it was like to be the titular Thing in the John Carpenter movie – a hapless alien intelligence, figuring out how to control human anatomy on the fly, and using it in uncanny, unintended ways. But there was no time to achieve mastery. After a few minutes loping around sideways dragging an office chair with the back of my hand, it was time to conduct my first heart transplant on a live patient. And from there, things only got more John Carpentry.

The basics of Surgeon Simulator, and thus the extremely solid joke at its core, are relatively unchanged from 2013’s original: you bash open rib cages with props, rummage clumsily for organs, and occasionally tear off the patient’s head if you move too quickly while part of your hand is affixed to it (“I was trying to reassuringly pat his chin”, I wailed, as Bob’s cranium hurtled across the theatre in a spray of cartoon blood). But the big limitation of the original – that there wasn’t actually much game surrounding that joke core, however robust it was – has been circumvented by the possibilities offered by co-op play. 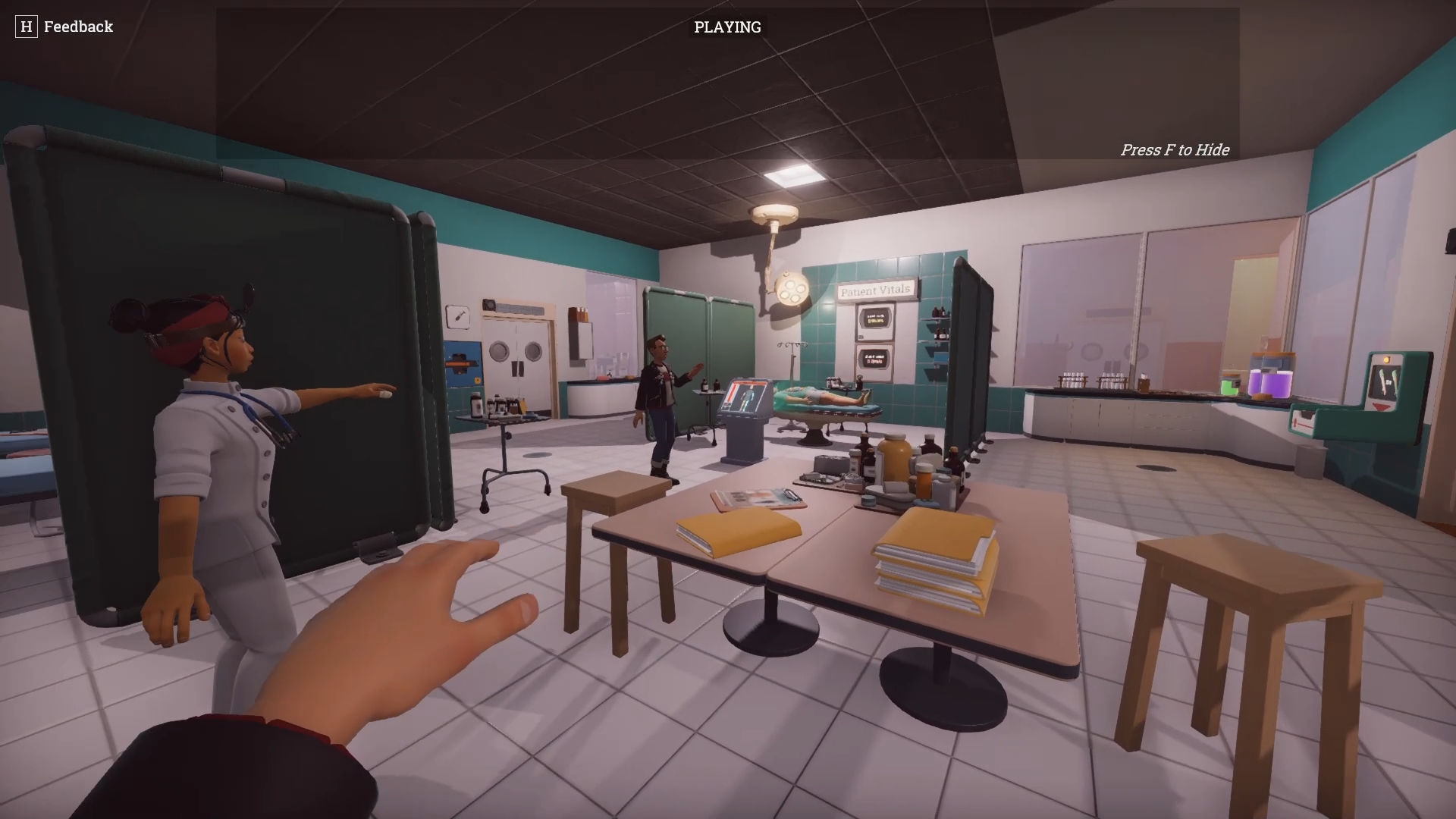 Surgery now often requires a whole team, with players working together to monitor vitals, perform blood transfusions (by jamming huge syringes into the patient) to prevent death by blood loss, and do the classic sawing/rummaging/bashing work. In addition to this, some of the levels take the form of Portal 2-style co-op puzzles where, for example, fresh hearts for the patient can only be acquired from a dispenser locked behind a series of contraptions that can only be opened by surgeons working together.

There’s good chat to be had as you try to fathom these puzzles out and assign each other tasks, especially when someone (in this case, it was me) will inevitably be buggering around trying to throw a hammer over a balcony. But there’s a certain amount of frustration, too. The cack-handed clumsiness and inhuman motion that makes surgery so funny can take on an air of genuinely nightmare-like frustration when you’re trying to do something precise with no inherent humour, like fit a fuse into a box, or retrieve a cassette tape from a cupboard. Still, I imagine this is alleviated somewhat when you’ve had more than an hours’ practice at the game. 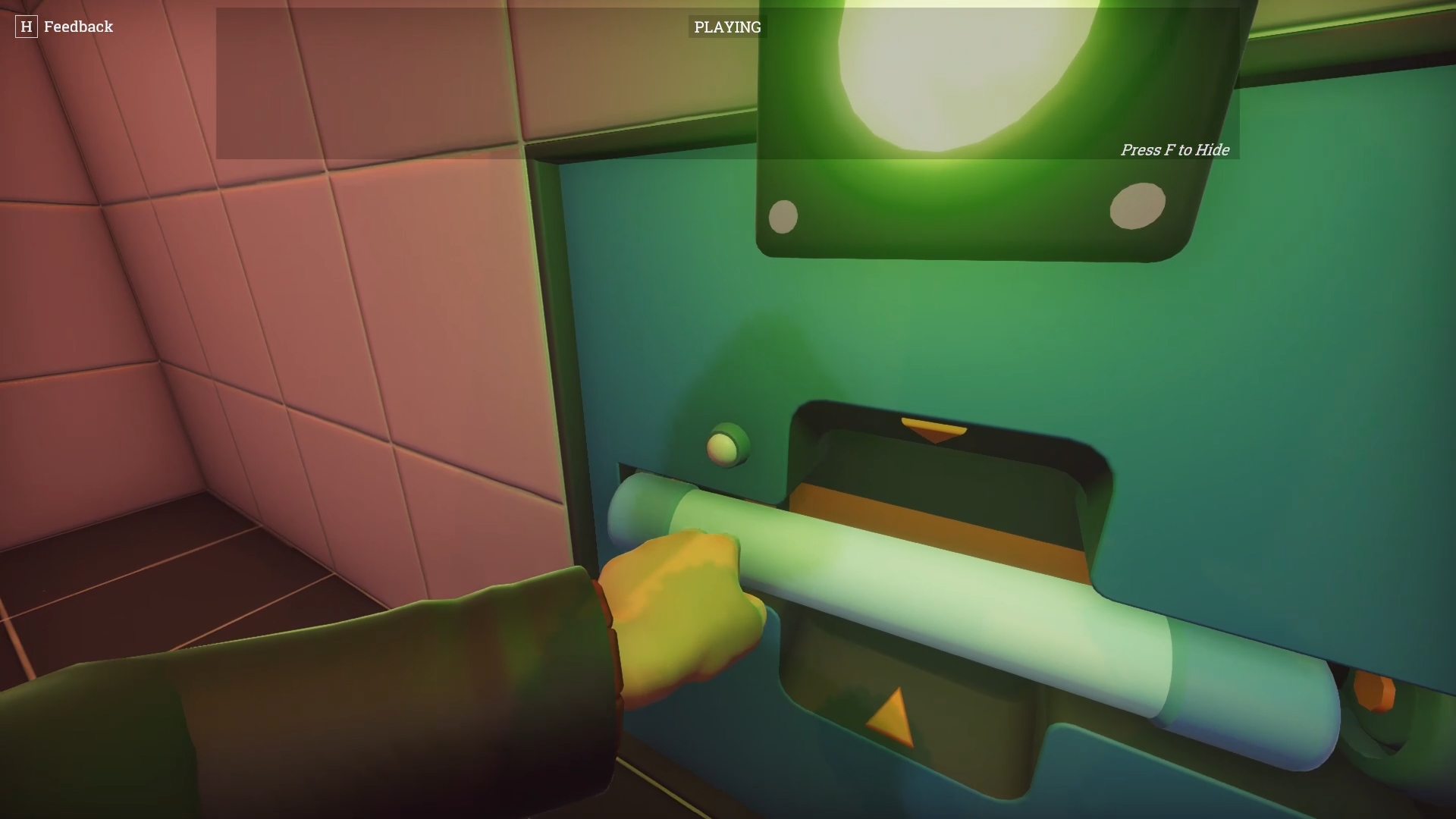 Of course, one of the reasons that Surgeon Simulator enjoyed such longevity online, despite the limited shelf life of its central lol, was the creativity of its player community. Mods from dentistry to zero-g space surgery continually reinvented the game, and Bossa clearly took careful note of the fact. As such, included for free with Surgeon Simulator 2 will be the Creation Mode, which will give players access to a tidied-up version of the exact suite of tools Bossa used to make the game itself. And in a smart development, this mode too supports 4-player co-op, taking it out of the realm of lone, late night modding sessions and making level-building itself into a casual hangout activity. I didn’t get a chance to see the Creation Mode, but apparently we can expect something more on it from Bossa soon.

I certainly hope I get to have another go when that happens. Because for all that I enjoyed learning to be a surgeon on a team of elite medical professionals, what I think this game really needs is a mode that focuses on playing basketball with human organs, while all your mates do the Squatting Witch at a medical-themed rave. And if Creation Mode lives up to everything Marc and Nate told me about it, that should be eminently possible.

(Disclosure: VidBud Colm Ahern worked at Bossa Studios for about a year in 2015/16)