Rejoice, JRPG fans. Persona 4 Golden has finally been summoned onto PC. Announced just moments ago at the PC Gaming Show as part of this year’s notE3 celebrations, this is the first time a Persona game has been released on something that doesn’t have the word PlayStation written on it, which is pretty darn exciting if you ask me. This is a series I’ve been busting to play on PC for absolutely yonks, and I’ve been putting the PC port of Persona 4 Golden through its paces to see how it holds up.

Before we get too excited, though, I do have to be a bit of a party pooper. This is a pretty basic port of the PlayStation Vita version from 2012, which itself is a port of the 2008 PS2 original, and it looks and feels every bit like it was made eight years ago. The PC version brings with it some welcome additions, such as support for higher resolutions and a 16:9 aspect ratio, but others such as its uncapped frame rate are more problematic.

Fortunately, it gets the big things right. In case you’re unfamiliar with the Persona series, this is a JRPG series that’s part dungeon crawler, part social sim. During the day, you go to school with your mates to boost your stats and strengthen your bonds with those around you, while at night you go and hit those aforementioned dungeons to try and rescue people who have gone missing around the town.

There’s a serial killer on the loose on Persona 4 Golden, you see, and he seems to be luring his victims to a parallel universe called the Midnight Channel that *checks notes* exists inside your TV. With the police at a loss, it’s up to you and your friends to try and solve these murders taking place around your hometown and catch the killer. 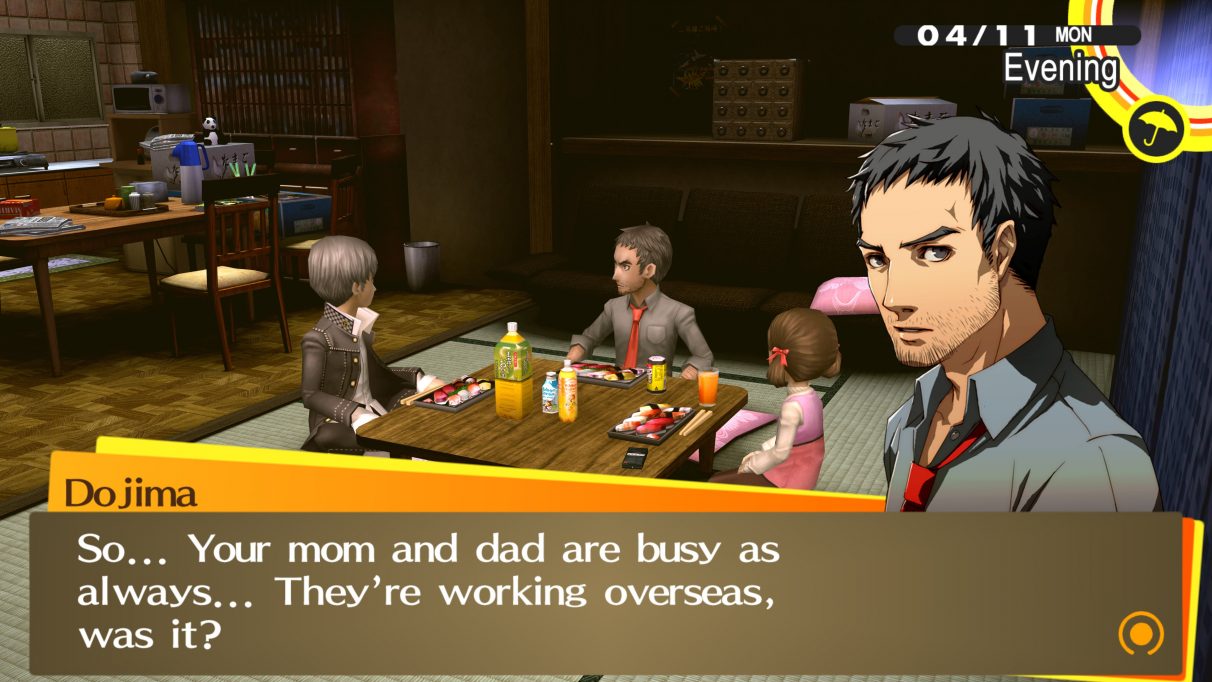 The character models still look every bit as gorgeous as they did in 2012, only now they’re in lovely 4K.

When you’re not tapping your foot to its funky battle music, you’re staring at big, visual novel-style text boxes and character portraits. On PC, the latter have never looked more lovely, and it’s great to see all that stylised artwork in crisp, 4K detail. It helps distract from what’s going on behind said portraits and text boxes, because man oh man, Inaba is not a town that’s aged gracefully.

It doesn’t help that the game’s setting is meant to be a bit of a nowhere town in the first place. To make matters worse, its big, shiny department store has gutted much of the local high street of its mom-and-pop shops and rural flavour. Shuttered storefronts and grey tarmac abound in this country town, making it a pretty grim place to be even back in 2008.

In 2020, these textures haven’t received nearly as much love as you might have hoped for in the PC port, and it’s here where you can feel the game’s age most keenly. Flat sheets of grass stand out by a country mile, and its shabby-looking school buildings feel even more run-down than normal. Its stylised dungeons come off a little better, and the up-ressed character models have a quaint, chibi-style charm to them, but the rest of it can frequently feel quite archaic. 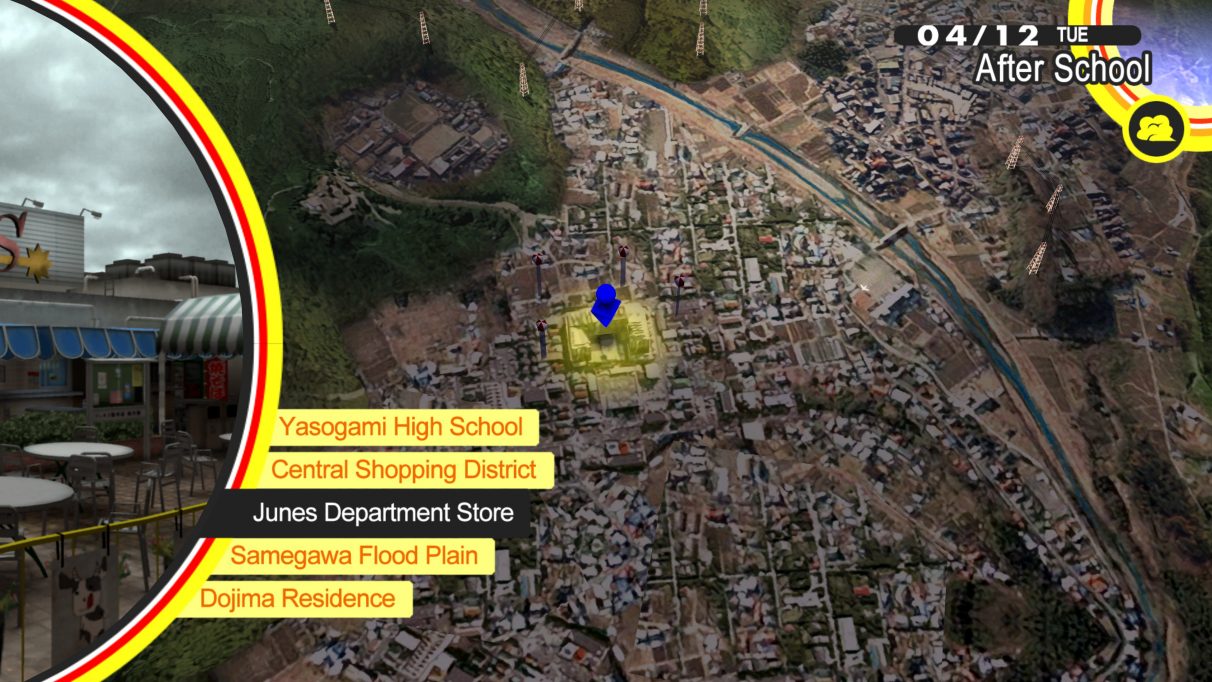 Persona 4 Golden’s map is… not pretty, and you can see the lines where the flat textures splice together.

In some respects, this is to be expected. This isn’t a remaster or a remake of Persona 4 Golden after all. It’s just a straightforward port – and we’ve seen similar barebones ports from Sega and Atlus before in the shape of Catherine Classic early last year. If you can get over the fact that this is an old game, then there’s still plenty to like here.

The biggest issue is that uncapped frame rate. The PS Vita ran at a smooth 30fps back in the day, but bumping that up to 60fps and beyond introduces quite a lot of motion blur in the PC port as you leg it around town. It’s less pronounced in the game’s dungeons – perhaps because you can control the camera here and there’s an extra CRT filter effect helping to mitigate some of that horizontal camera blur – but I found it to be quite disorientating when I was caning it around the school and the streets of Inaba.

There are precious few settings in the configuration menu to help fix it, too. There’s no option to cap the frame rate at a particular setting, for example. All you’ve got is an on / off V-Sync button and the option to slow down the camera speed. The latter is set to 3 by default, but even knocking it down to 1 was still a bit dizzying. 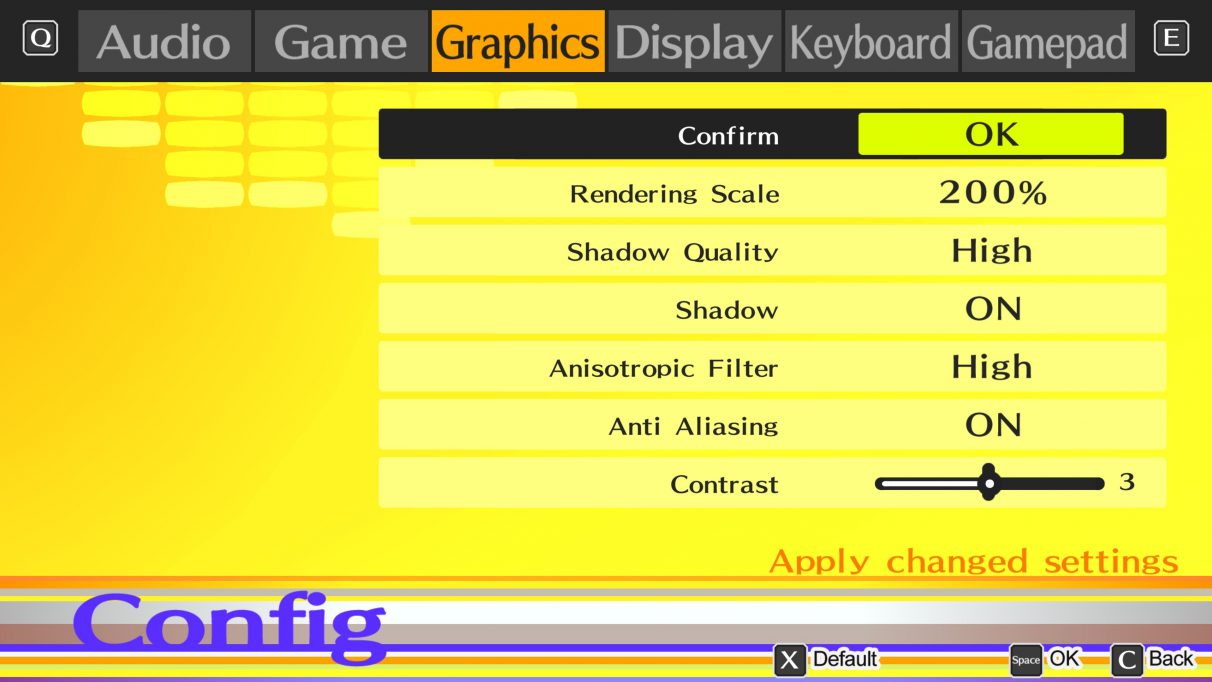 This is the extent of Persona 4 Golden’s graphics settings.

Speaking of PC settings, there aren’t a huge number of them to begin with. In the Graphics tab of the Config menu, you’ve got Rendering Scale, Shadow Quality, an on / off Shadow setting, Anti-aliasing, Contrast and a low-high Anisotropic Filter option, but that’s pretty much it. The screenshots I’ve included here are all at Persona 4 Golden’s max settings, too, so it’s really not going to get much prettier than what you see here.

There are a few clumsy hangovers from its PS2 days here, too, such as only being able to save at dedicated save stations, and quitting the game when you’re running around in the overworld. This wasn’t so much of a problem on the Vita, as you could simply put the game in standby and instantly pick up where you left off. Alas, there’s no such luxury here on PC, and instead you’re forced to sit through its many cutscene conversations until the bitter end with no option to pause or even hit the settings menu in the process. 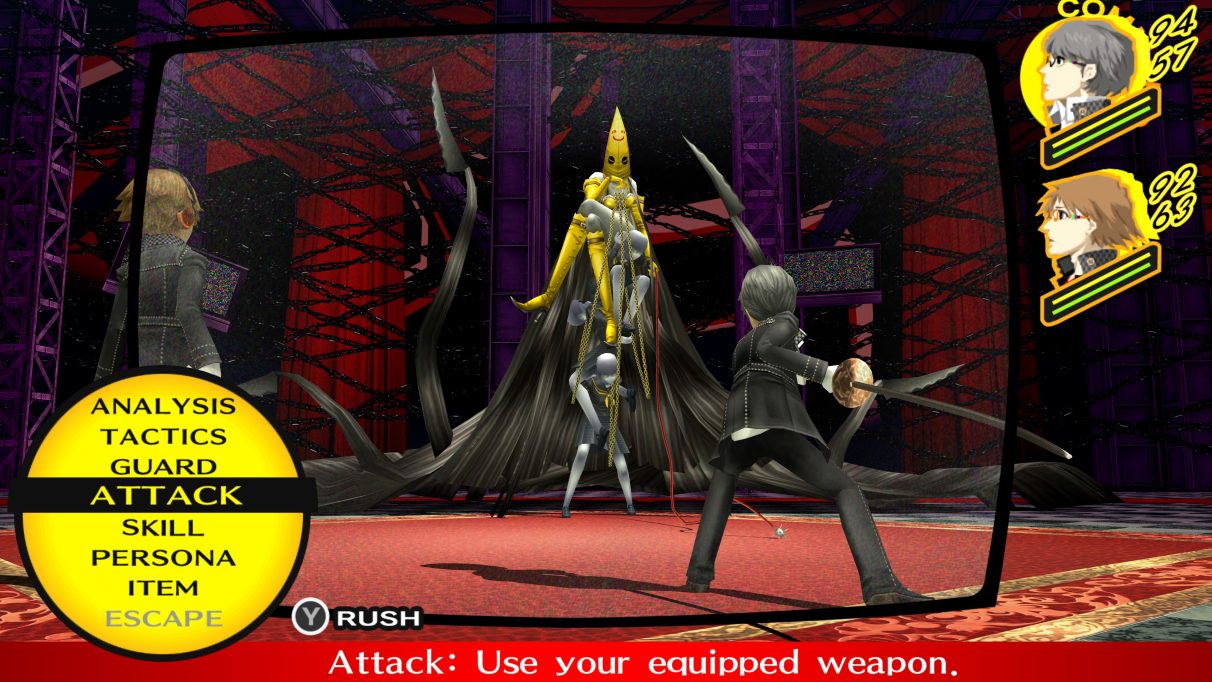 Persona 4 Golden’s turn-based fights are still every bit as thrilling (and weird) as they were eight years ago.

Still, even though Persona 4 Golden’s PC port is far from perfect, I’ll still take it over not being able to play it at all. Look past its ageing facade and this is still one of the best games in the series. Its huge cast of characters are still deeply charming and beautifully observed, and its turn-based battle system remains one of the best in the biz. Top it all off with a foot-stomping soundtrack that’s every bit as catchy as the acid jazz of Persona 5 and there are plenty of reasons why Persona 4 continues to shine, even 12 years on from its original release.

We’ll have a full review of the game on the site in the coming days, but in the meantime I’m still glad that Atlus have brought this port of Persona 4 Golden to PC, and here’s hoping it’s just the start of the series’ journey onto Steam. There’s no denying the PC version is a fairly basic port of its Vita source material, but it does a decent job of bringing it up to date for modern systems and it’s a welcome addition to my Steam library nonetheless.

Persona 4 Golden is out on PC right now