I could use a lot of words and phrases to describe Master Spy that, when I read them in a game’s description, tend to put me off. Retro. “Hardcore”. Brutal. Platformer. Balaclava.

And yet I enjoyed it so much that I almost pitched a review a few years back. It’s tough, for sure, and I don’t think it’s the most approachable stealth platformer, but it feels fair. It doesn’t waste your time. If it had come out a few years earlier, it would probably have been pretty big. It can now be yours, along with literally over one thousand other games, as part of the Itch Bundle For Racial Justice And Equality.

Does that mean it’s the best out of all of them? Ih. There are lots of best games in there. Let’s not worry about that. Let’s worry about those security tigers. 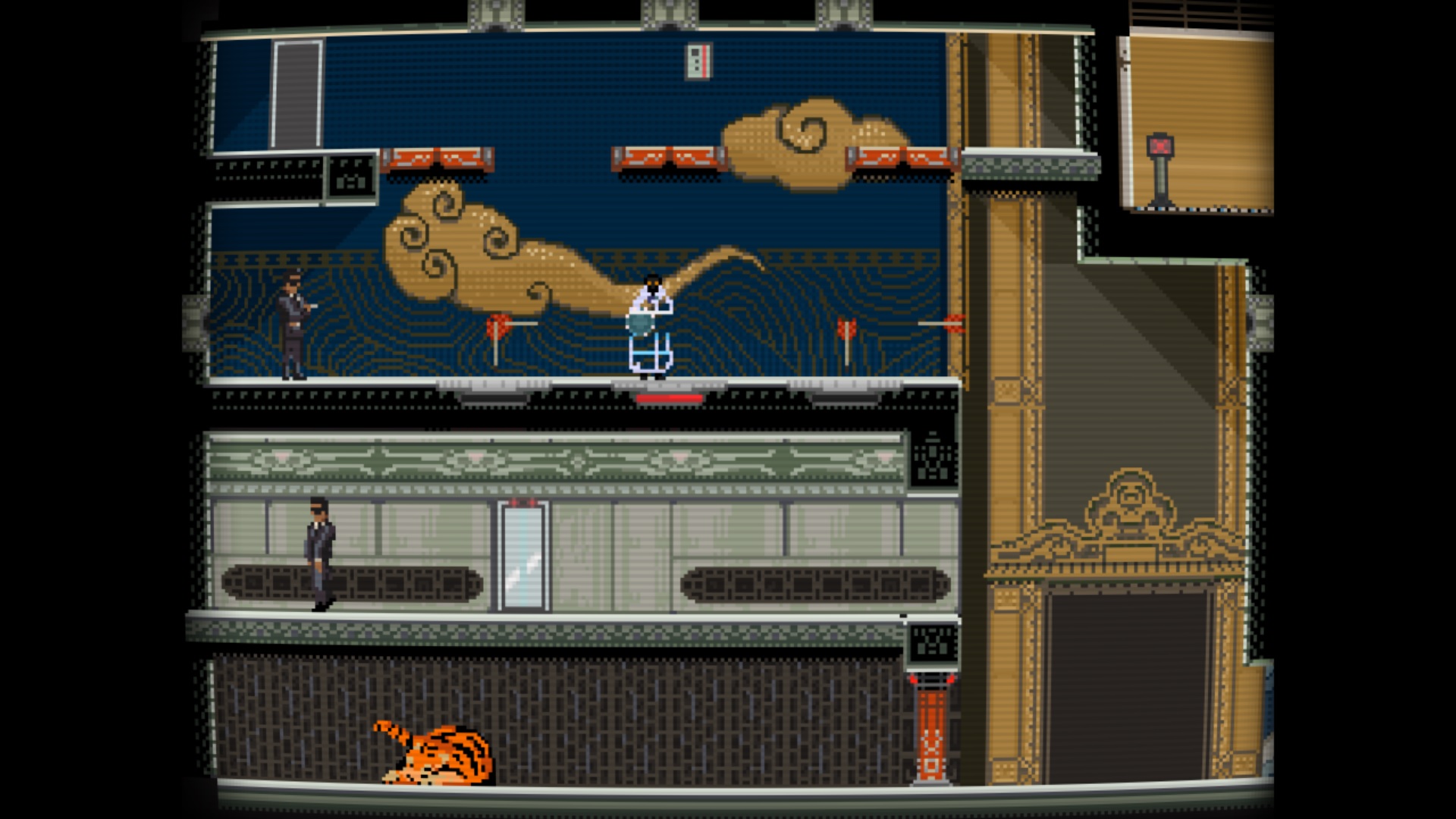 Trapdoors dropping onto dart tripping pressure pads while a guard watches. Not even one of the harder screens.

You are Master Spy, an impeccably professional covert espionage enthusiast with prescient parents and a Team Fortress 2-style permanent balaclava. You’re hired to recover some stolen take reels during a corporate dispute that perhaps inevitably turns out to involve robots, all-powerful hackers, and Japanese cyber-assassins in a tower full of tigers. Its 8-bit stylings suit all this classic 80s sci fi stuff perfectly.

Your only real tool is your cloak. I like that about it. There’s nothing to unlock, there are no extra gadgets, no XP, no character stats or special powers. From the first screen you have everything you need, save for skill. Press down or shift to cloak, press space or up to jump. Everything else depends on your timing and practice. Guards patrol each level, and it’s game over if they spot you while uncloaked. You can cloak indefinitely (though you move much slower while it’s on), but you can only avoid the guards, never hurt them or knock them out. 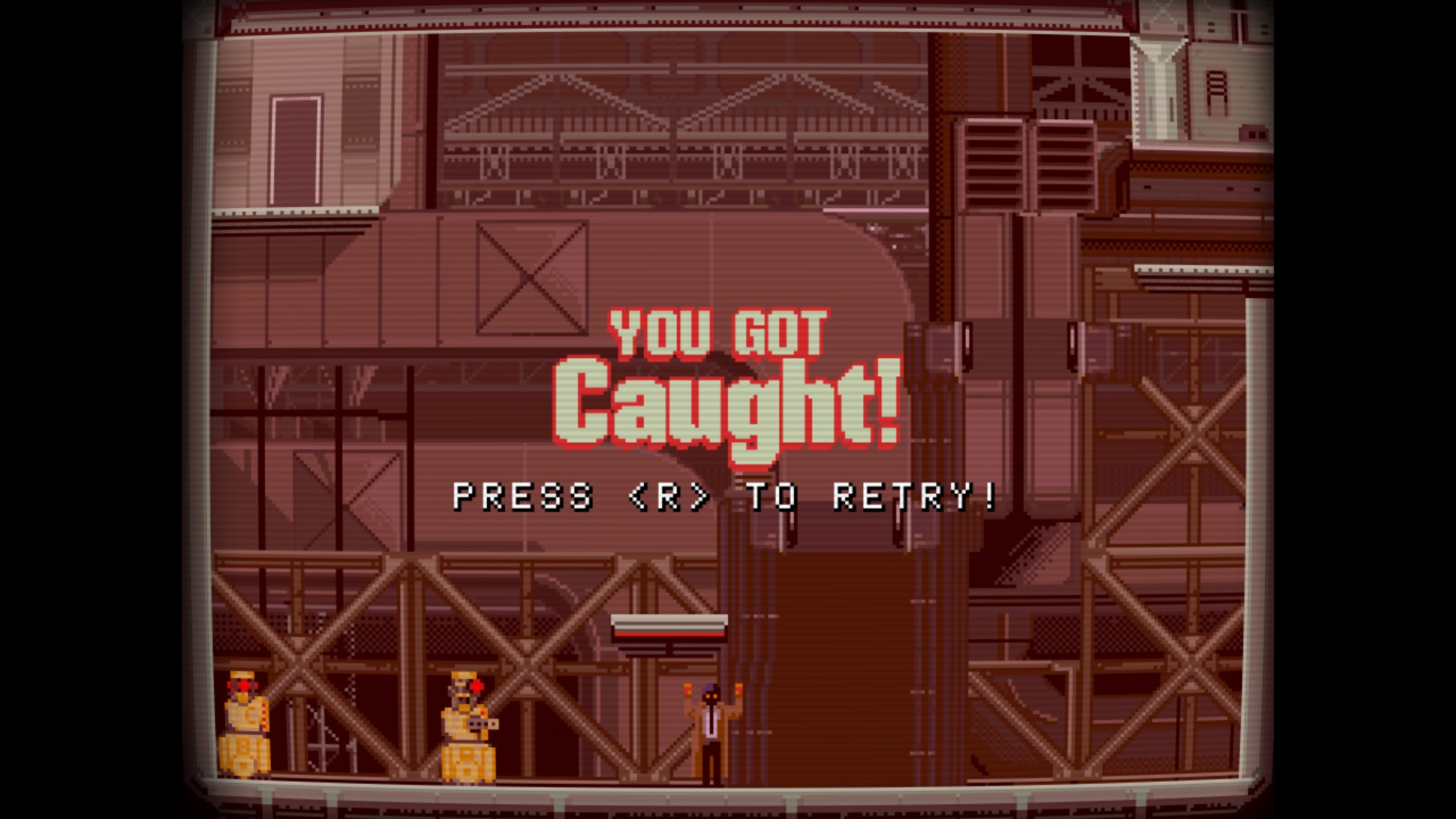 Get used to seeing this. But! The instant restart stops it feeling like a taunt.

They’re quickly joined by dogs and tigers that see through your cloak but have to touch you. Traps and laser barriers and pressure pads fire darts or trip alarms. Trapdoors mess up your movement, and I seem to remember there being sharks later on. And still all you have is your cloak, and your jump. It’s as much a puzzle game as anything, particularly as the levels get larger, several including areas where you can safely scout ahead to decipher the proper order in which you must collect the keys to the exit.

It’s hard as hell but it introduces new threats at an excellent pace, and I never felt that I had anyone to blame but myself when I messed up. Over and over again. I’m terrible at it, but I kept on going, and not just because the plot is fun and its cutscenes are stylish as hell. You can even flip the difficulty up and down mid-level, outright cheating if you want to skip past certain bits. Master Spy demonstrates how easy it is for a game to be hard without being smug or cruel, and I admire that very much.

The Itch bundle has now raised over $6 million and is still running until Tuesday. Pay at least £4/$5 and you’ll get over 1600 video games, tabletop game, useful game-making bits, and more. All proceeds will be split 50/50 between the NAACP Legal Defense and Educational Fund and the Community Bail Fund. If you already have it, see our tag for more recommendations.