Now streaming live:
Beyond Blue Review
With gorgeous seascapes, nuanced writing and a heart the size of a whale’s, Beyond Blue sets a new bar for educational games – but as pure entertainment, it has its limits.

So many are the dignities heaped upon Beyond Blue, that it’s somewhat hard to get at the game beneath. When I began playing, I knew that it had been made in association with the filmmakers behind the Blue Planet II series, and in consultation with a host of marine scientists. I knew that it promised a sober and ultra-realistic exploration of the oceans, and that the Flaming Lips were on the soundtrack. I knew that it would feature whales in some capacity.

I didn’t actually know what it was, you know, as a game. That was fine, though. The sea and its contents are possibly the most potent preoccupation in my overly-preoccupied life, and so I was open to whatever these people wanted to sprinkle on me. The answer, it transpires, was a very simple diving simulator, about swimming up to a range of extremely realistic marine animals and clicking on them.

There are eight modestly-sized levels, with visual-novel-type interludes telling a thoughtful, bittersweet story in between. There are sixteen short documentaries included, unlockable along the way, and… not a lot else. Indeed, for a game about something so vast and mysterious, Beyond Blue offers a starkly constrained range of things to do. If you want thrills, chills and hundreds of hours of replayability for every penny spent, forget about it. 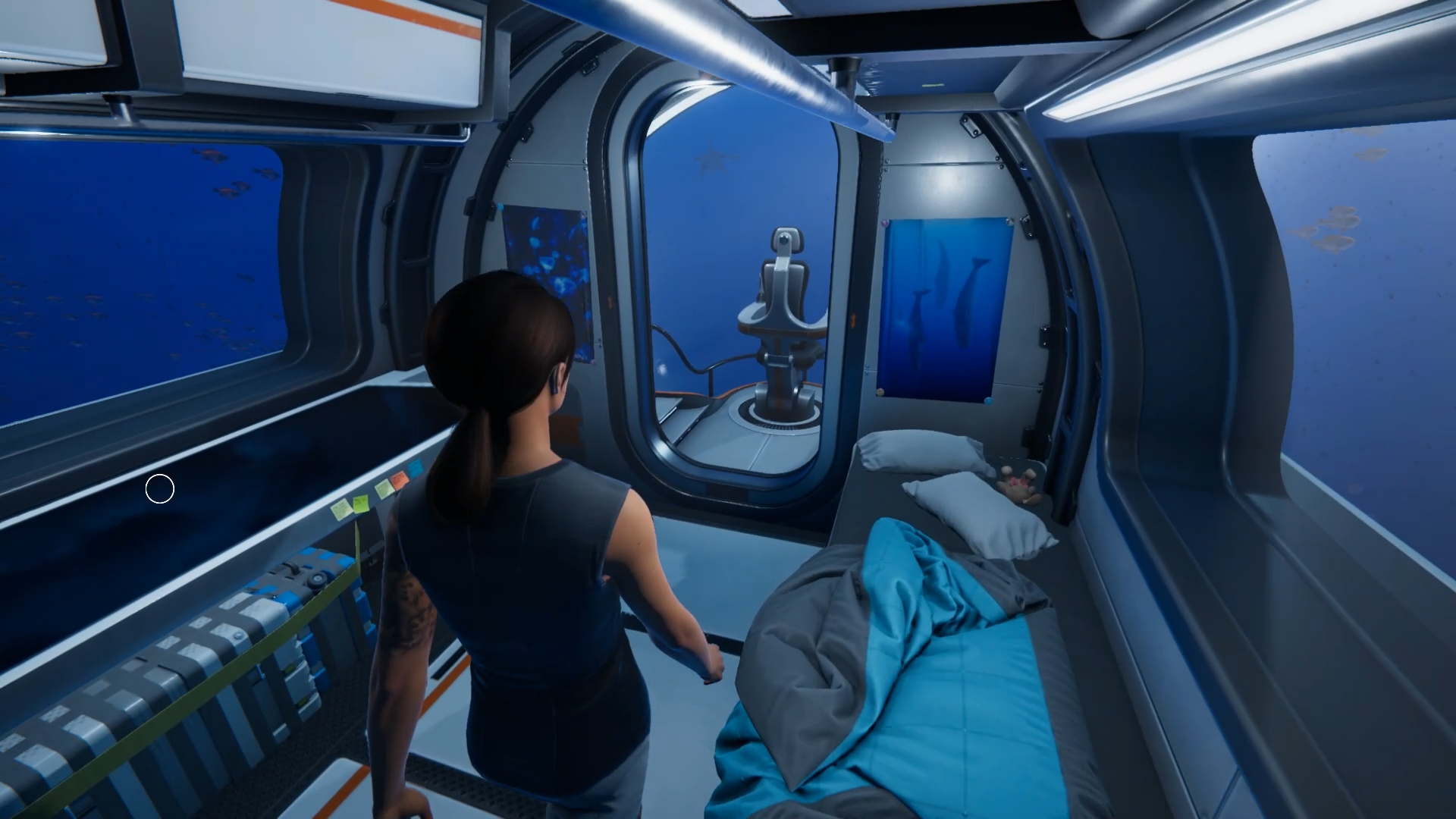 This is Morai’s little submarine house. You can’t use the toilet, which is annoying, but the set dressing does change between dives.

But with that warning dispensed, I’m going to go ahead and recommend it anyway. Because it approaches its subject so deftly, and so decently, that it works. The smallest dent in its integrity might have seen it implode and flood with tons of icy mediocrity. But Beyond Blue held firm, and took me back to the surface with a slightly lighter soul.

You are Morai, a marine biologist who was raised to love the sea by her free-diving Grandmother, and who currently lives in a little near-future submarine, tracking a family of sperm whales and occasionally livestreaming her dives. Written without sufficient subtlety, Morai would be nauseatingly wholesome. But like all of Beyond Blue’s small cast of characters, she manages to stop just short of being an unbearable goodie two-flippers. Those other characters are Morai’s worry-prone, super serious colleague Andre, a landlubber research scientist called Irina who seems a bit Big Pharma until you get to know her, and Morai’s little sister Ren, who’s back home living with their now dementia-stricken Grandma, and struggling to stay in university.

Only Morai appears in the game, however. The others are voices over the pipes, either talking into your suit headset during dives, or having chats with you in your sub’s cockpit as you gaze out at manta rays and sunfish in between bouts of the ol’ splashy-splashy. They’re brilliantly voice acted, and manage to blop a constant flow of educational material at the player without ever seeming like grisly living textbooks. Beyond Blue’s writers managed phenomenally well prioritising the delivery of information without losing cohesion as a story. Equally, while the game has a deadly serious environmental point to make, it never strays into either simplicity or pious preaching. 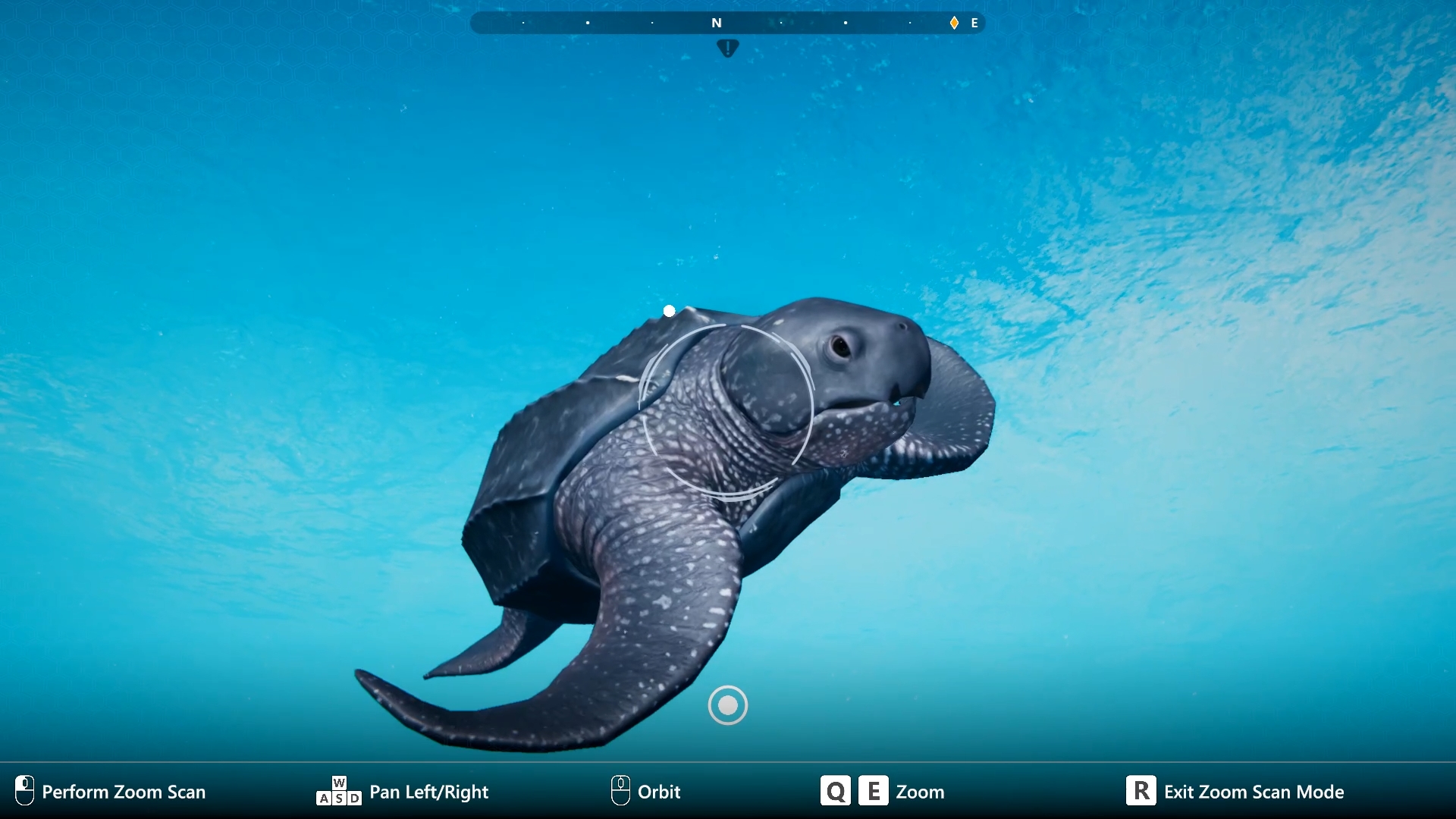 And unlike so, so many stories which claim to be about scientists and then turn out to be about adventure brutes who can do maths, it really is about scientists. On the dives themselves, which make up the bulk of the game, you do science. Yes, it’s a little abstracted, and way too often boils down to “scanning” whale after whale after whale, but while the tech might be fudged, the rationale for the things you’re doing makes complete sense. You don’t just zoom around glibly shouting “SCIENCE!” while doing nothing of the sort.

The dive environments vary wildly, from shallow water tropical reefs to sepulchral, lightless chasms where hot water vents rumble, and all are modelled painstakingly after examples of real biomes. In that sense, the simulation is spot on. The animals living in those environments are exacting replicas too, with the best swimming animations I’ve ever seen in a game, and 3D models so good I almost don’t resent the fact that virtually every mission objective boils down to looking closely at them. There are loads of types of animals too – while the whales are the stars of the show, there are leatherback turtles, whale sharks, spider crabs, and dozens more – with each level having its own location-appropriate mix.

You can’t hurt any of them, and they can’t hurt you – nor do they want to. When I first saw a load of circling sharks, I was rolling my eyes ready for the inevitable “defence” tutorial. But I should have had more faith: just like real sharks in 99% of situations when you dive with them, the whitetips just carried on doing shark stuff as I swam through their midst. Later, on an evening dive, I even saw sharks huddled together and resting in the current, which I’m quietly confident is the only time such a supposedly “unsharky” behaviour has ever been modelled in a game. Honestly, what a bloody tonic. What a genuine antidote to the mean-spirited, goonish cruelty of Maneater. 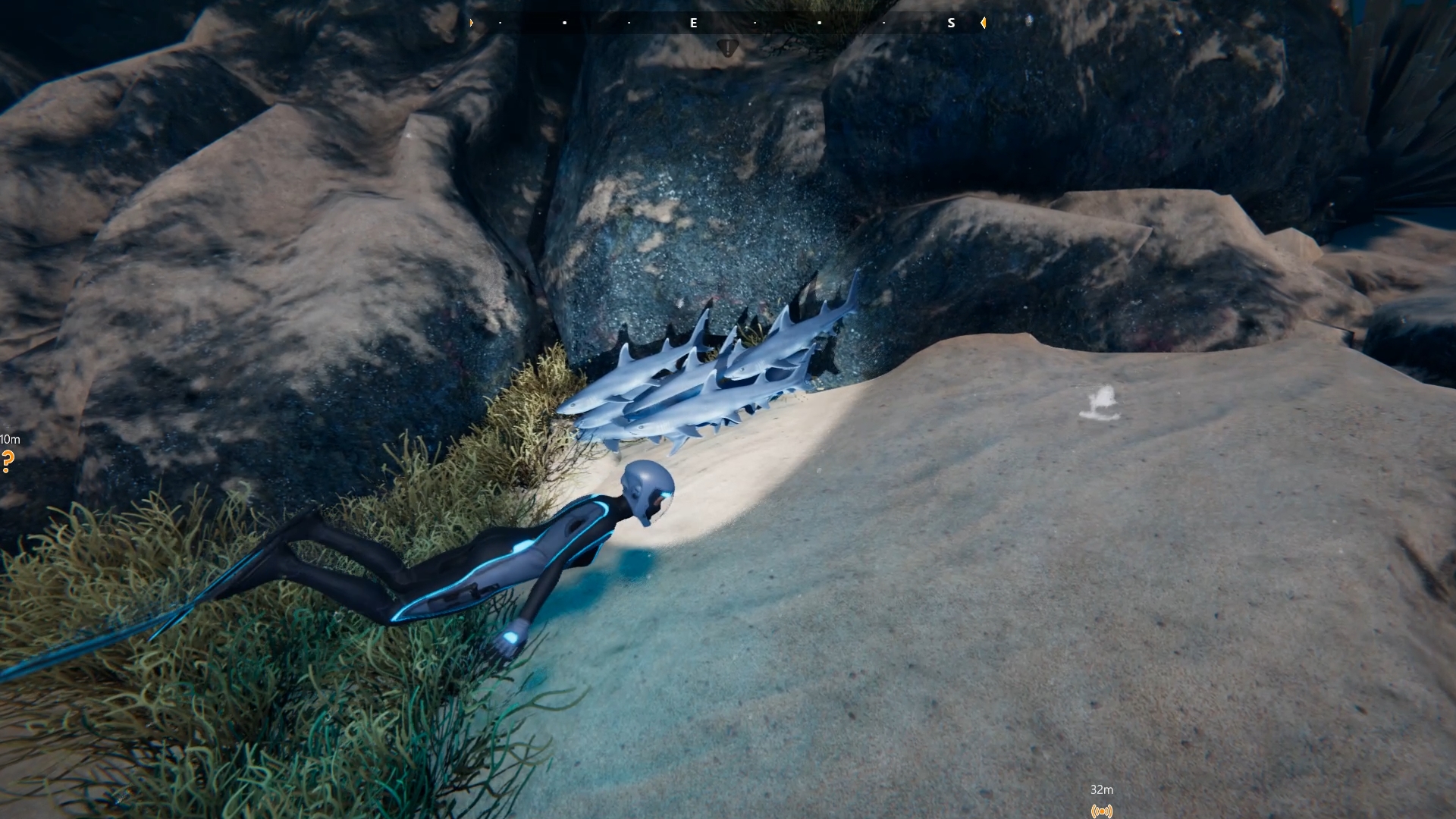 What an absolute delight to see.

But hey, swings and roundabouts, right? Because the problem with all of this peaceful, reasonable simulation of research-driven diving is that there is relatively piss all to do. Seriously, you swim to waypoints, press single buttons, listen to dialogue, and move on. After a few waypoints, the mission ends. You’re free to explore outside of your objectives, and you will, but the play areas are small enough it won’t be too long before you’ve seen all they have to offer.

I suppose that’s where Beyond Blue will fall short of a lot of people’s expectations. It’s not really about exploring at all, in the true sense of the word, and while the realism is immersive to an extent, the bones are just bare enough that you can never truly lose yourself in it. And although Beyond Blue’s environments offer so much more than those of most games, with so little in the way of features to distract from them they’ve got an awful lot of scrutiny to carry. You can’t breach the surface when you’re in the shallows, nor can you descend too far from the depth your dive has been set at. Invisible walls are all too apparent. The sea life looks real, but doesn’t really do anything but drift about aimlessly, so after a while you realise you’re in a sort of Westworld for fish. 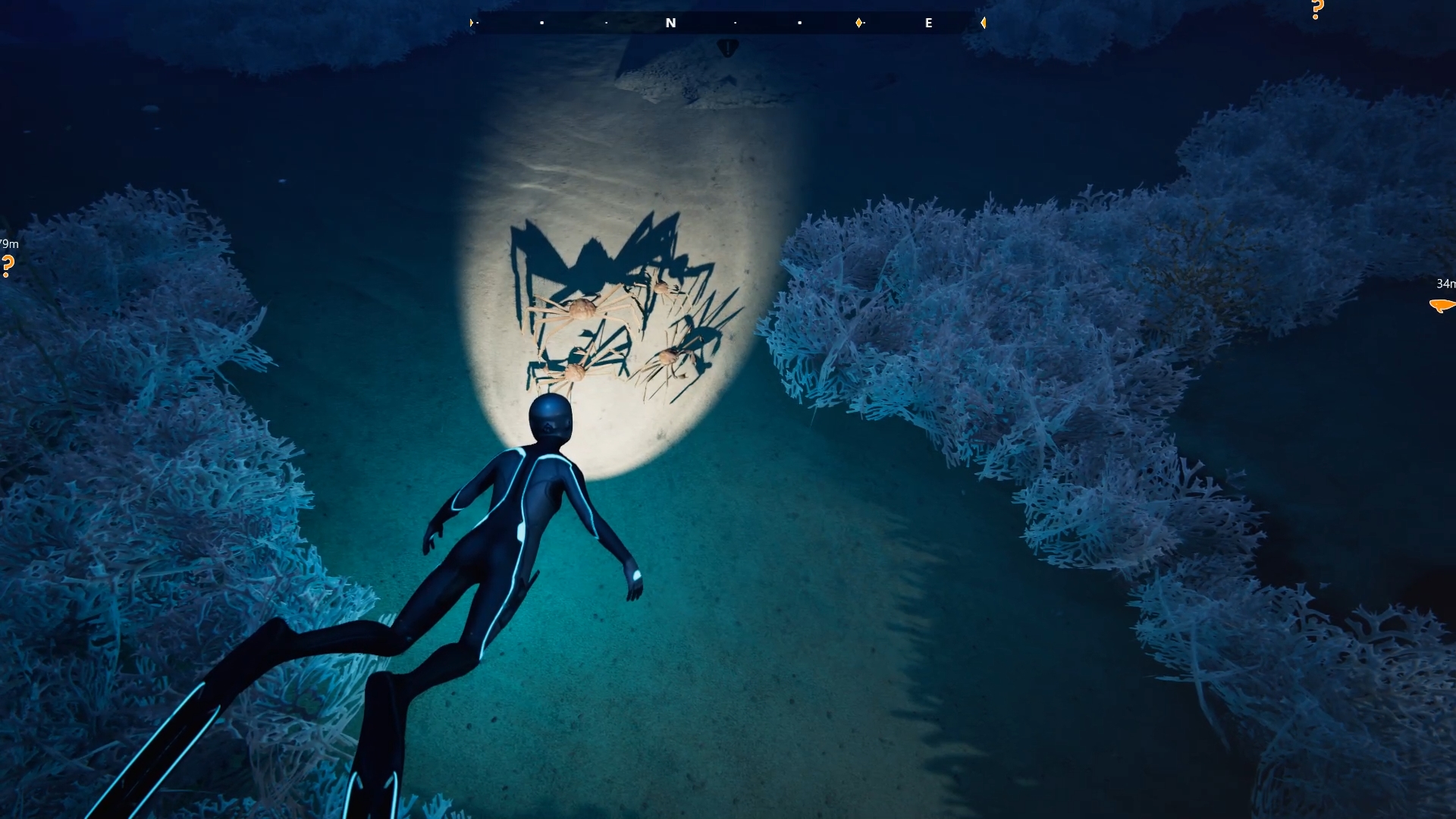 Worst of all, so much of the effort that’s gone into making the very deepest locales seem melancholy and strange is wasted, as there’s no sense of scale. Thanks to handwaved technology, Morai is capable of diving in her regular suit even at abyssal depths, and there’s no real sense in having to travel to get there. The madness-inviting vertical isolation of the deeps, the monstrous cold and the pressure, are all absent. These lonely pits feel like any of the other levels: roughly oval patches of water, about so high and so wide, with a certain number of fish spawned within them. It’s not that I’m unimpressed, or ungrateful, you understand. I just think the developers set themselves a near-impossible task.

I suppose in the end, it’s the whales that save it all. Or as my daughter called them as we played together (my goodness, this is the perfect game for occupying curious toddlers), the “whooloos”. There are orcas, bottlenose dolphins and humpbacks in Beyond Blue, but the main whooloos are Sperm Whales, and specifically the family that Morai is monitoring over the course of the game. And they, I swear to Poseidon, are a profoundly skilled portrayal of the real deal. I cannot begin to express in the closing of this review what awe-inspiring, what godlike creatures they are, but Beyond Blue knows, and Beyond Blue will do its damnedest to explain that to you with all the tools at its disposal. When I first encountered one in the game, it rolled slowly over onto its side, its fist-sized eye actually tracking me as I swam past, and I felt a genuine tingle. 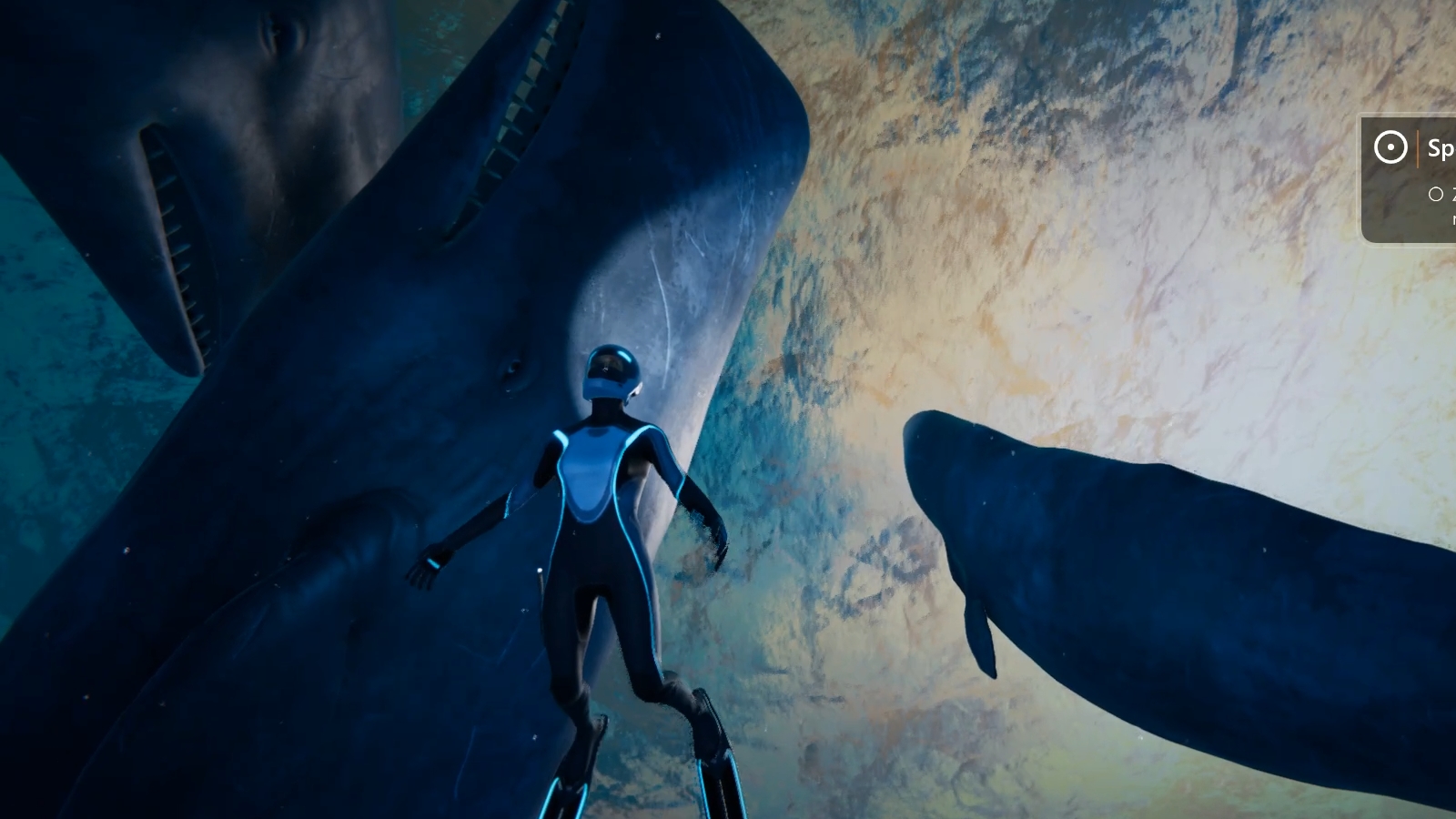 The last time I encountered a Sperm Whale in the game… well. That’s something I want to leave for you to experience for yourself. But it brings together the human plot of the game, and the documentary story that’s being told, in a way that was far more powerful than I was expecting, even though I saw it coming a mile off.

I’m gonna finish by linking to some tweets I wrote about Sperm Whales a couple of years ago. And if that seems like a bit of a weird and barely relevant thing to do, please bear with me. Sperm whales and deep dives have taken on a particularly heavy meaning for me. This made it sort of hard to write clearly about Beyond Blue, as it hones in on the exact same metaphor as I did, for the exact same thing, and so left me a little bit stunned by the sensation I was playing through my own thoughts.

This won’t necessarily be true for other players, of course. But you could well see those tweets as a sort of diagnostic for whether it’s worth you buying this game. If you read them and think “ah, yes… that’s the sort of emotionally laden sea stuff I like to think about,” then the odds are Beyond Blue’ll be worth it for you, despite all its drawbacks. And if that is the case, just be prepared to relax and click on a lot of sealife while it gets to its point.

More about Beyond Blue