I was a massive Star Wars nerd as a kid. Obviously. But by the time the prequel trilogy had been and gone, I was out of my teens and largely out of love with the whole thing. I mustered a bit of “ooh, that’s pleasant” for The Force Awakens, and I had fun with the other two movies, but I definitely didn’t feel any of the so-called Star Wars “magic” people talk about. I’d gotten older, I’d moved on, and I figured that if an entire trilogy’s worth of “hey, remember that bloke/droid/hand gesture/monster chess” moments hadn’t made me feel a twinge of wistfulness, there were no relevant heartstrings left to tug. I’ll admit, The Mandalorian gave me a run for my money, but I suspect I really liked it because it was a fun, easy-to-watch show, rather than because it was a Star War.

But then, about an hour ago, I saw the trailer for Star Wars: Squadrons, the space pilotry extravaganza that’s due to fall out of the big EA Games Bum on October 2nd, and my luck finally ran out. I went down like a chump, reduced to helium-hearted nostalgia by the same, idiot’s trick all the New Star Wars things get people with – moving pictures of spaceships I spent way too long daydreaming about as a ten year old. But how come this one got through my armour? Easy. Because it wasn’t targeting my nostalgia for the Star Wars movies; it was targeting my nostalgia for TIE Fighter. And that nostalgia, my friends, is a gorgeous beast I will never be rid of.

Here’s that trailer again, by the way, before I continue:

Lovely stuff. Or at least I thought so. And since this is on Steam from day one, has no microtransactions, and supports both single- and multiplayer (it’s also going to be VR and crossplay-capable, according to Alice O), I feel like I might have a fighting chance of just being excited about this without some jaded Caligula swaggering into the comments to tell me why it’ll definitely be dreadful. Optimistically, then, let’s talk about that excitement.

The trailer opened on an X-Wing doing X-Wing stuff, which was exactly what I expected it to open on. Fair enough. The X-Wing was being pursued by a TIE Fighter, doing its classic scream like an electric bear that’s outraged at having run out of loo roll. Again, to be expected. But then it cut to the cockpit of the TIE Fighter, with all its red lights and leather and hoses like a weird little German fetish club for one, and the pilot HAD DIALOGUE. The trailer was about him, too! Which meant… playing as the naughty men again, just like I did in 1996. And yes, the rebels too, but that’s not what matters right now. 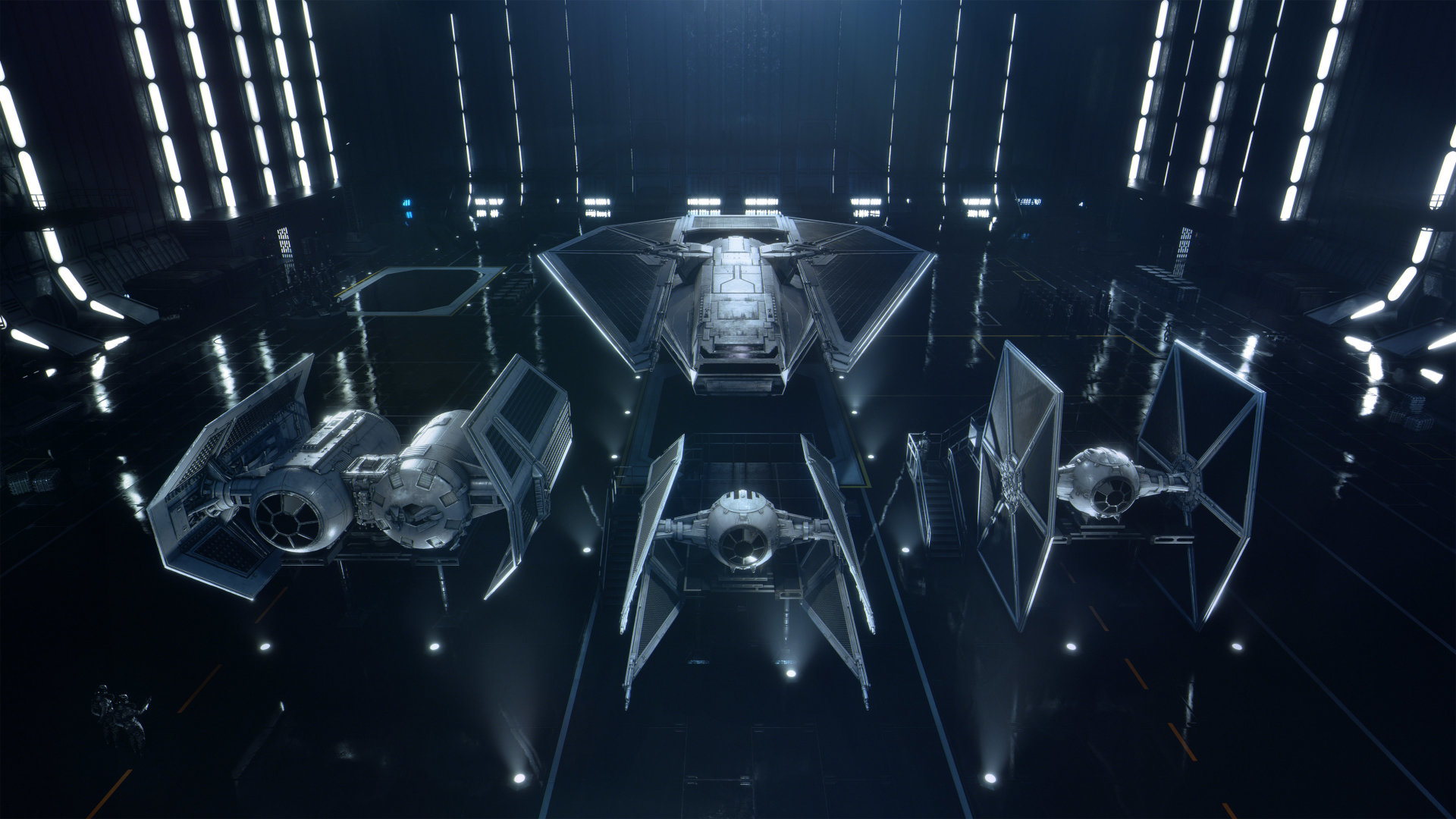 I love TIE Bombers. They’re like goth binoculars. Absolute piss as warships, but just really pleasing to regard.

As I twigged this, the X-Wing shot through a tiny gap between two large heavy objects – because it’s the law that this must happen in every Star Wars. And as the pursuing TIE slammed into the objects, busting its wing but not fully exploding, I remembered the time I wrenched my brand new joystick right off its mounting in a desperate attempt to avoid the same fate. Such is the fate of TIE pilots. It was all coming back to me.

The game seems to be set right after the end of Return Of The Jedi, which is a great place to choose, at least in terms of evoking the wonders of TIE Fighter. It means there’ll be potential access to the same roster of ships (ah, for the return of the weird trilateral TIE Defender, and the lumbering dunce that was that Assault Gunboat thing), and it won’t get caught up in the raft of post-Disney canon that I’m not really that familiar with. No: this game will be set at a point in fictional time where I still, tragically, knew every starship model number and weapons loadout, and it’ll be like putting on an old slipper. A slipper that screams, and shoots green blaster bolts. 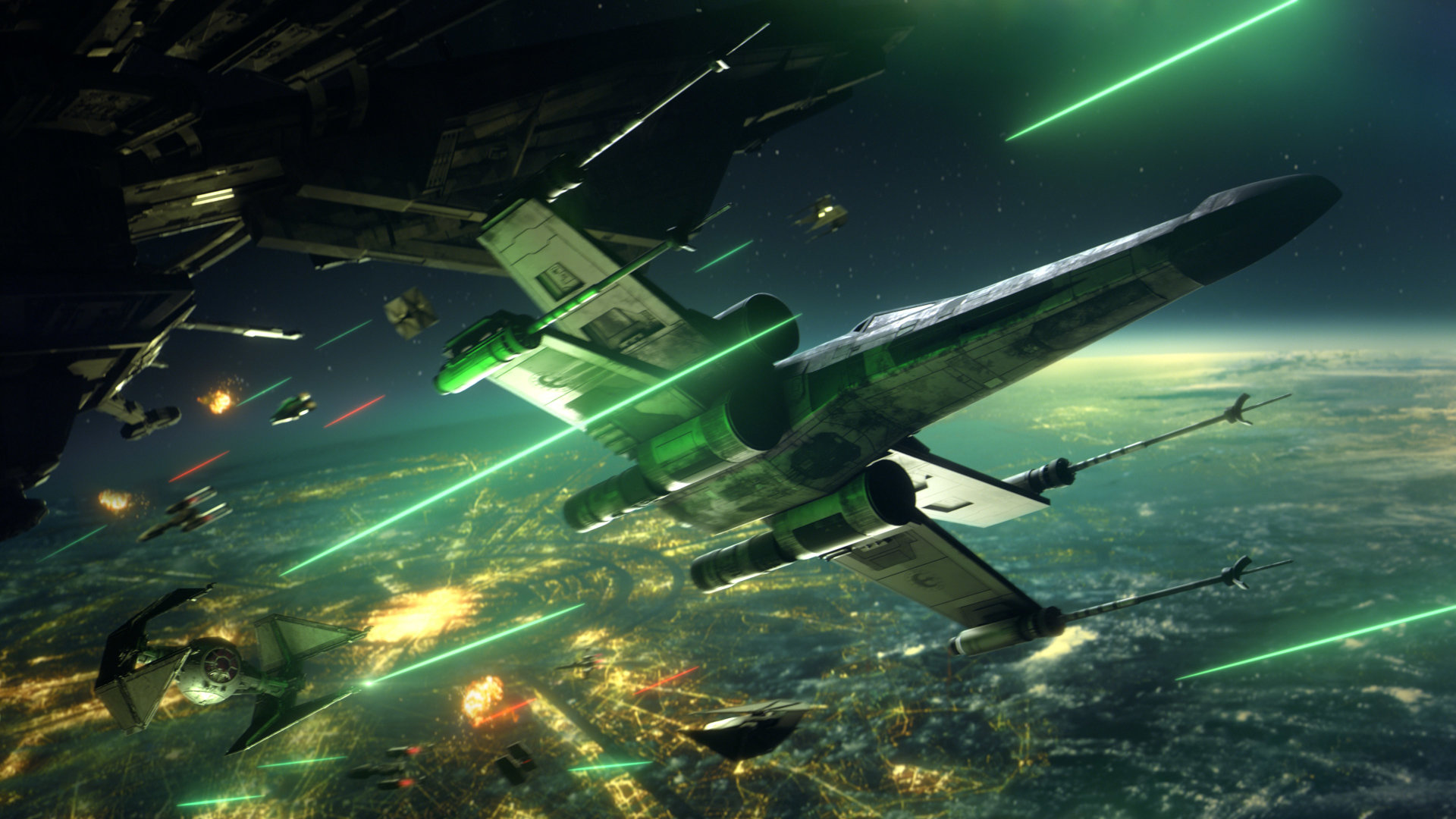 If EA can just manage not to royally balls this up, this’ll be the TIE Fighter successor that me and a million other boafuses have been waiting for for a quarter of a century, with barely even any false starts along the way to have let us down. It’ll mean a game with the technology to deliver so much more than TIE Fighter’s blank heaps of polygons were ever capable of in terms of space battles. It’ll mean I can finally stop trying to convince myself it’s worth going through the warlock nonsense required to make a copy of TIE Fighter work on my PC, and finally consign it to the past. Hell, it might even mean I finally go through the ballache of setting up a VR rig. For another TIE Fighter, I’d do a lot of things.

So please, EA, get this one right. Just this one. For me.