I’ve barely made a dent in the Itch Bundle For Racial Justice And Equality, but I can already recommend Night Of The Consumers as a quick and rewarding intro into its daunting bounty of terrific games.

It isn’t a zombie game. The monsters are far worse than that. They are… ugh. Customers.

You’re a new hire at a supermarket, and your job is to put things on shelves to get the shop looking tidy. Fail to do so in time and you’ll be fired. It would be easy, but for the customers. They never leave you alone.

There are no stakes beyond losing your job, but that doesn’t stop the horror of The Manager chasing you down through a suddenly darkened shop floor to yell in your face. It is terrifying.

NPCs wander and lurk about the shop, some jumping up and down to get your attention, and there’s no telling when they might suddenly snatch your focus away, with an accompanying music sting, to ask for your help. Mostly they’ll want to be led to a specific aisle, but occasionally you’ll have to find and retrieve an accurately hideous baby. 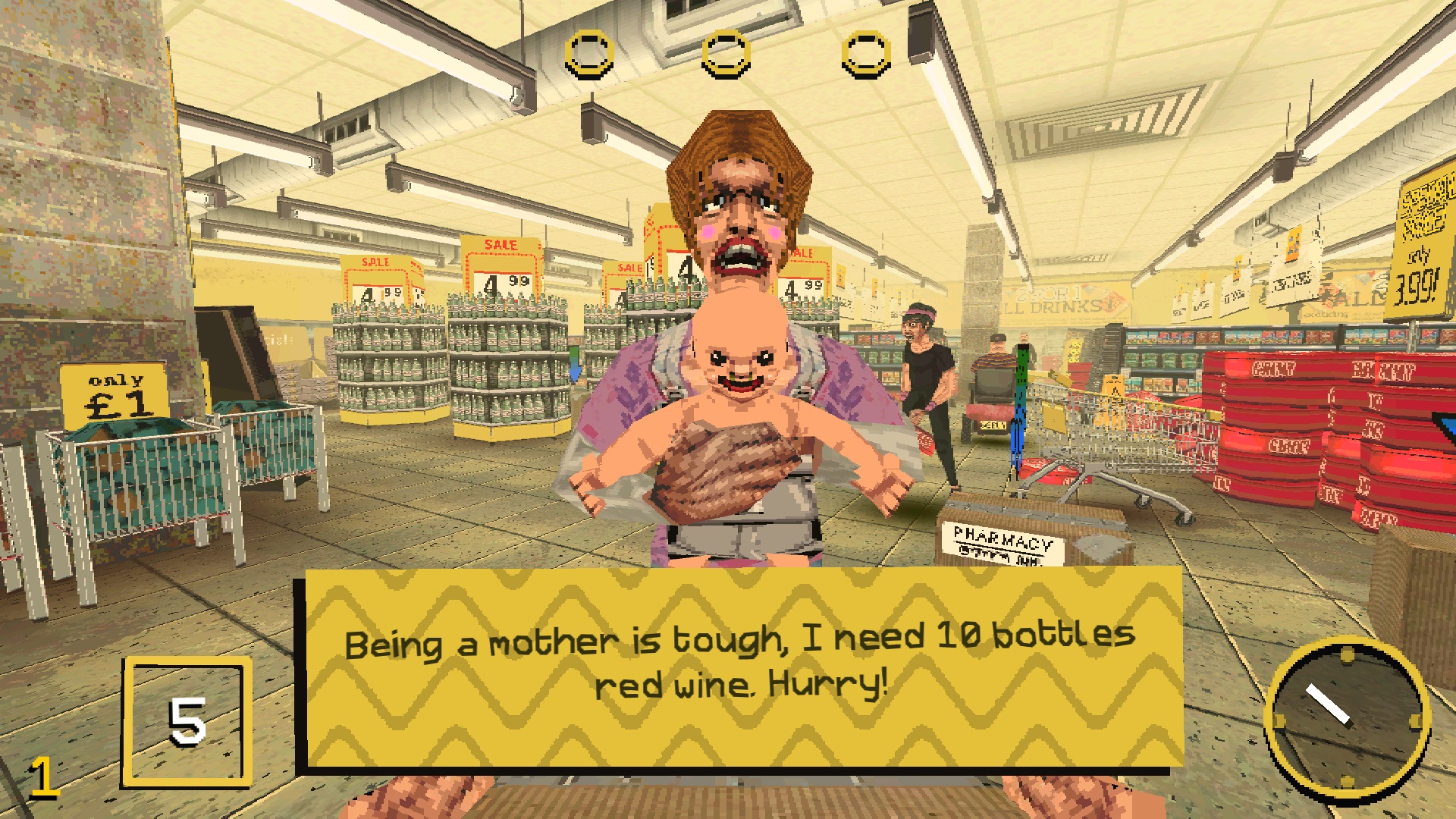 Remember how awful it was being dragged around the shops as a kid?

What’s remarkable is how well it captures the basic frustration of any job where you’re constantly visible to the public. It doesn’t much go for depicting the rude or disgusting or creepy or outright aggressive ways that some people treat staff, but it nails the sheer irritation of never being able to get the most basic tasks done because of constant interruptions. People don’t have to be rude or unreasonable to make your job impossible. The accumulated interruptions and lack of respect for your agency or personal space really chips away at your nerves. And yet despite that, because of its cartoony horror tone and, well, gaminess, it’s entertaining and not all that frustrating to play. The NPCs are frustrating, not the game itself. That’s a difficult balance to hit. 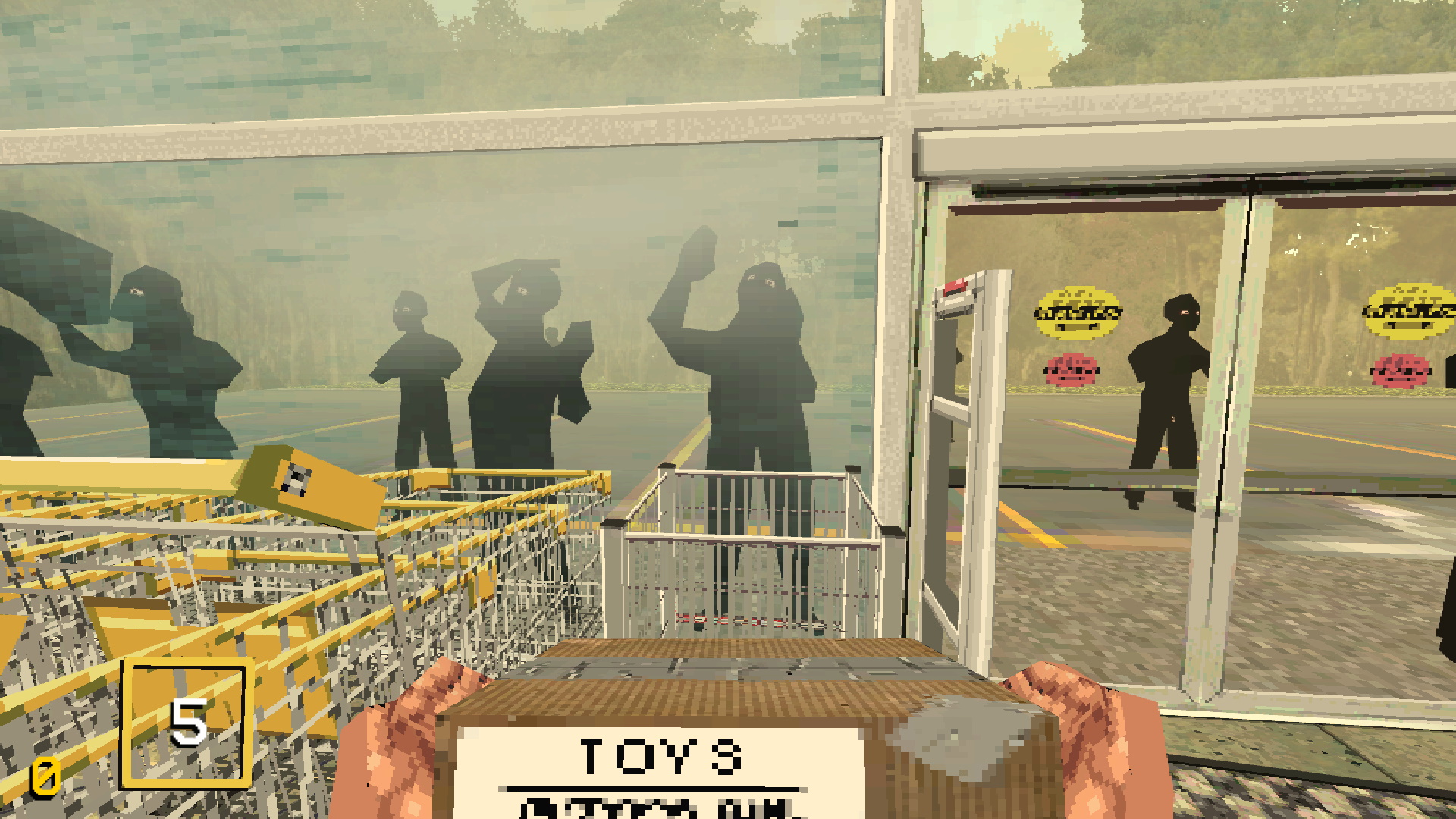 The messed up thing is, when you stop working with the public you sort of miss them after a while.

The only thing it’s really missing is the people who start demanding you help them while you’re very clearly in the middle of helping someone else. The worst of the public do a lot of ridiculous, infuriating things to workers who they think are beneath them (and they do think that, whatever they say), but that one was always one of the most maddening. Admittedly, simulating that would likely make the game as impossible as most real customer service jobs.

It’s nice being able to sprint away at full speed when you hear a distant “excuuuuse meeee” and hide behind the security door until they go away, though.

Night Of The Consumers is currently part of ‘The Bundle’, which costs a mere £4/$5 for over one thousand games, with all the proceeds going to the NAACP Legal Defense and Educational Fund and Community Bail Fund. There’s currently less than a day to get in on that, and get near-free access to everything we’ve recommended from it and hundreds more. You can do that right now on Itch. I cannot stress enough what an incredibly good idea that is.

Tagged with GERMFOOD, Itch Bundle for Racial Justice and Equality, Night Of The Consumers.

More about Night Of The Consumers