Last night, after watching the trailer for EA’s forthcoming space combat jamboroo Star Wars: Squadrons, I finally fell prey to the nostalgia that had remained unstirred by an entire trilogy of Star Warses, and got excited enough to blurt the words “TIE Fighter successor”.

Reader: I’m sorry. I was drunk on lasers. Utterly trolleyed on spaceships, and slurring that a trailer was my best mate. This has happened before, I will admit. In 2002, after watching a midnight screening of Attack Of The Clones with my mate Josh, the two of us sat on the night bus home to Mottingham, and looked at each other guiltily for a while, before one of us dared speak the unspeakable. “It was better than Empire, wasn’t it?” said Josh. “Yep, best Star Wars yet,” I added, sage as a septuagenarian champagne critic. “Can’t believe Yoda had a fight.”

Of course, we soon came to realise the depth of our mistake, and we still use that moment as a sort of parable: an illustration of how your conception of what you want something to be, can warp your perception of what it actually is. And so, now, the hangover has come for Star Wars: Squadrons. It’s not that I suddenly think it will be rubbish or anything (although I will concede what was pointed out in the comments, that it’s never the best thing when a trailer won’t show play footage just four months from release). No, my mistake was in wanting it to be the next TIE Fighter so much that I believed it could be. Because, speaking purely in practical terms, I’m not sure it’s possible for there to be a successor to TIE Fighter.

This isn’t quite your traditional, hackneyed “good old days of PC gaming” post, but it may skirt close to it. Mainly, I want to talk about missions. Because if I really cast my mind back to what was excellent about TIE Fighter, those are what stood out. There were bloody millions of the things. Like, dozens upon dozens of missions. And while some were pretty much repeats, most were both complex and original. 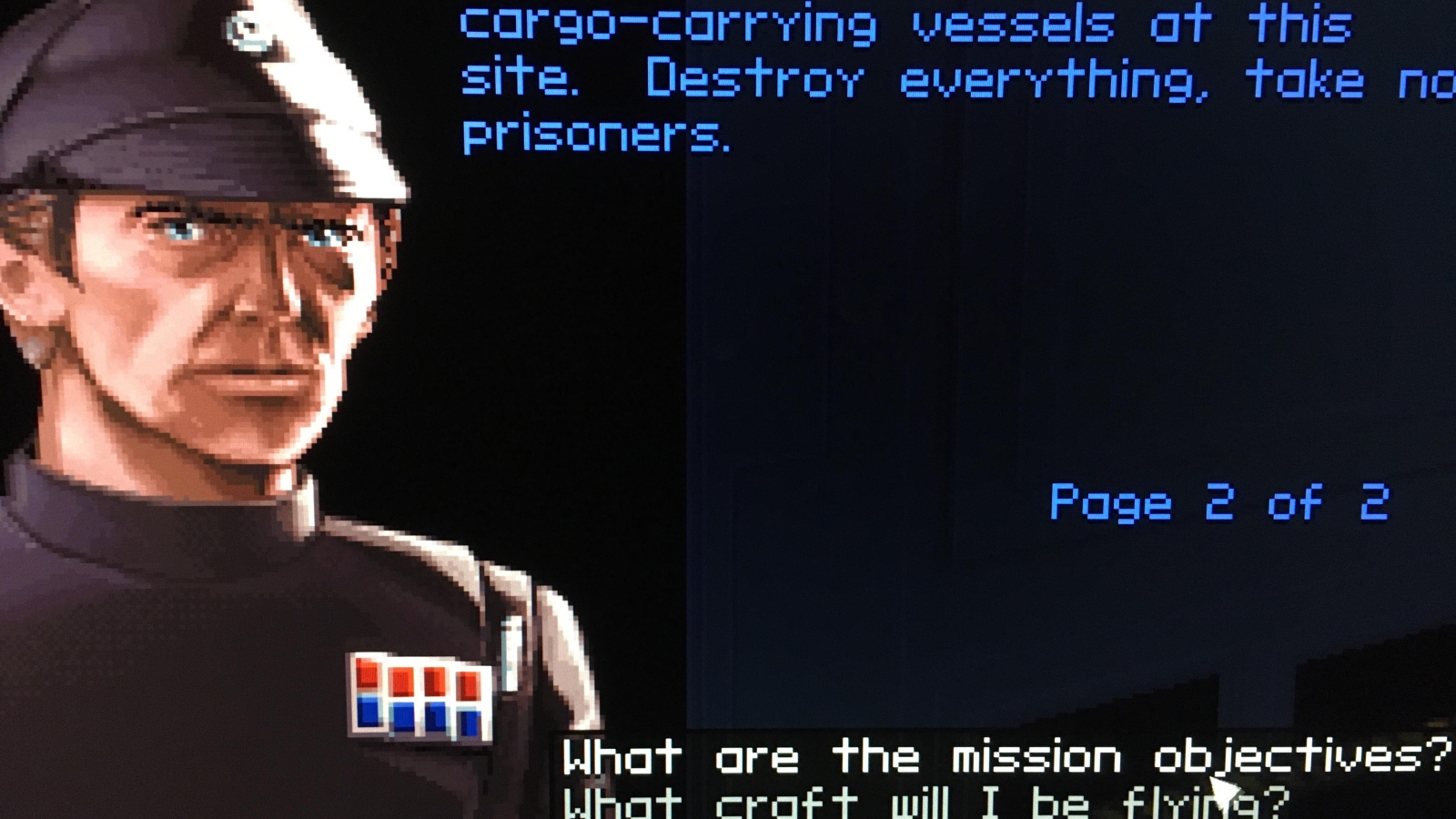 This guy looks very faintly, but eerily, like my wife’s dad.

So complex, in fact, that they necessitated a full briefing complete with minutes of recorded dialogue from your commanding officer, and a holographic PowerPoint presentation with multiple slides, and little markers to represent which spaceships would be where. This was in-depth stuff, and if you didn’t listen carefully, you’d be fucked when the missiles started flying. You’d miss a lot of the story, too. TIE Fighter had a lot of narrative, especially for a combat flight sim, and without a cutscene in sight, its twists and turns played out through radio chatter in missions, and through their lengthy briefings.

It was great. It made you feel way more immersed in the role of being a pilot, as you could imagine sitting there during the briefing with a space pepperami and a sarcastic expression, quipping with your wingmates as some grey-suited git pointed sternly at icons denoting mon cal cruisers and nebulon-B frigates. It upped the sense of achievement when you stuck to a plan and carried it out, too. And in a game where spaceships were featureless blocks denuded of textures, you needed all the immersion you could get. 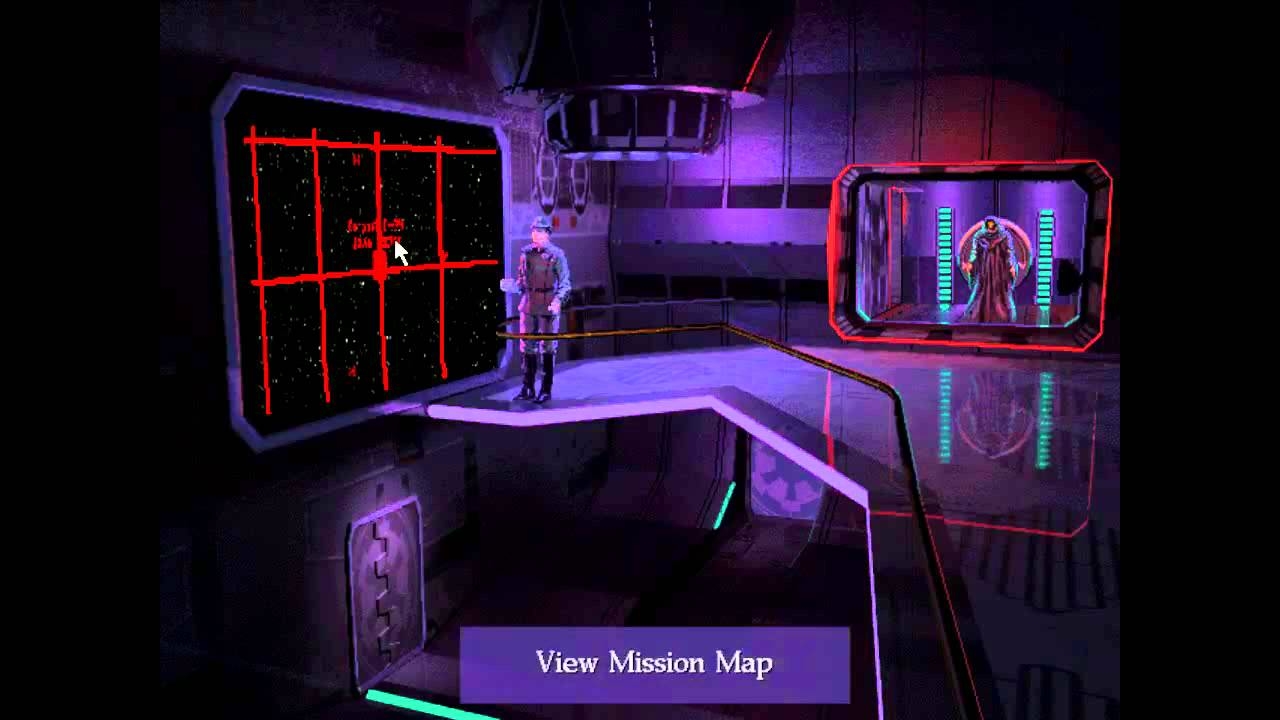 As you progressed through TIE Fighter, you also started getting mysterious secret missions of this robe dude on the right. Looking back now, I absolutely love how totally inconspicuous he is, standing in the middle of a neon light show about eight feet from the flight deck commander.

But I do not think this would happen now. I still don’t buy into the cynical roaring that Squadrons’ single player mode will be rubbish “because EA”: Titanfall 2 is a one-game rebuttal of that argument, and I could go more specific and mention the campaign added to Battlefront 2, whose creative team are now working on Squadrons. But if it’s good, it’ll be a different kind of good from what TIE Fighter’s campaign was. And this is where I sail perilously close to the rocks of saying “gamers these days”, in pointing out that tastes – or at least publishers’ understanding of them – have changed a lot in 25 years.

However much I may enjoy dozens and dozens of complicated missions, each with a rambling audio-only briefing over an icon-pocked battle plan, I suspect the majority of Squadrons’ potential customer base might expect something a bit more immediate. And that’s fair. Now that games look so astonishing, it’s quite natural that you’d want to get right in there and start blasting your way through unbelievable spacescapes. 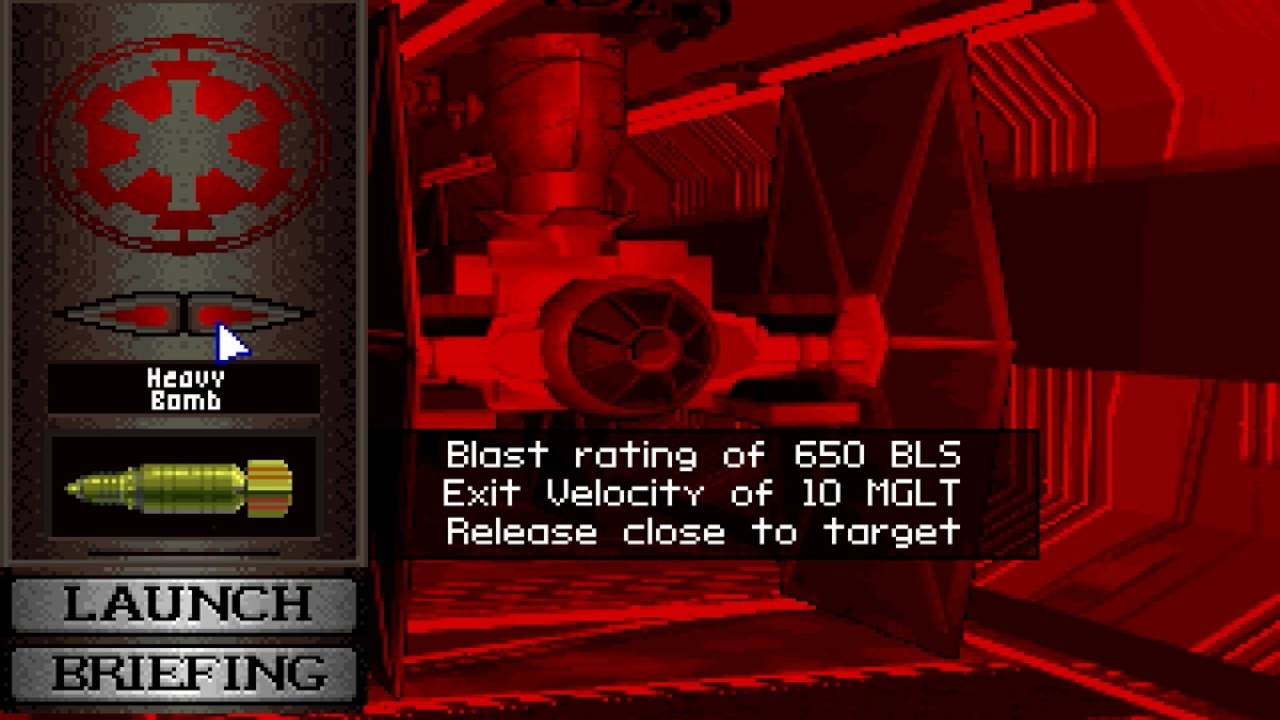 No actually I would like to read some bomb statistics, please.

And furthermore, because of said astonishing looks, you can’t just crank out seventy-odd missions – complete with cutscenes, set pieces, environmental art and all the rest – without either being accused of massive asset reuse, or racking up unfathomable development costs. There’s nothing lazy or greedy about a shorter campaign – it would be commercial insanity to expect EA to apply the TIE Fighter formula to a modern game, when something with one tenth the level of convolution would meet the standard of something like Titanfall 2.

Still, there’s plenty of other things that made TIE Fighter special that haven’t been precluded by the onward march of progress. The complex system of commands for wingmates (which you’ll probably have some form of in Squadrons, since the trailer focused on groups of five pilots per side), are applicable, for example. Another feature one could at least hope to see return is TIE Fighter’s energy management metagame, where you had to constantly choose whether to divert reactor power to weapons, shields (fore and aft!), tractor beams or the like. This is maybe less likely, as EA already have the rudiments of a combat flight sim with the spacey bits from Battlefront 2, which play out quite differently. And again, complex on-the-fly power management might be seen as “a bit nerdy” for a modern space fight.

In the end, I am still optimistic that Squadrons will be a lot of fun. And I’m still a bit rosy-minded at the prospect of flying a TIE Fighter again (or as an absolute lord in the comments to my last post rightfully corrected me, a quad-cannon variant TIE Interceptor). But the mid-1990s have been over for a long time, and it’s silly to expect them to come back.