After a year of speculation, I’ve finally had a chance to play Humankind, Amplitude Studios’ much-anticipated competitor to the Civilization series, and while I only got to play through the very first era of the game on a single map, I can say for sure we’ve definitely got a contender here. I’m hesitant to say how strong a contender until I’ve seen more of the game, since I think Humankind’s brand of satisfaction is going to lean heavily on the way the outcomes of your decisions stack across thousands of simulated years. But the fact that I could see, even in the early game, how the calls I made might have ramifications for centuries to come, was a promising sign.

It’s probably worth starting at the beginning. Which, for Humankind, is earlier even than Civ’s – rather than opening the game on the imminent foundation of your first city, it starts you in the neolithic, before cities or the agriculture that made them possible were even a thing. You begin with a bunch of nomads, who blunder around a world full of forests and mammoths and that, collecting dinners and knowledge of their surroundings until they’ve got enough stacked up in either category to settle down and start a civilisation. And it’s in the neolithic that I discovered the first example of what would become a running theme in my notes – that is, just how far Humankind is prepared to go to let you play according to your own preferences.

The first time I played, as the science-happy Babylonians, I figured I ought to get set up in bricks and mortar ASAP, so I could start racking up the ancient wisdom and making telescopes and the like. So I barrelled out of the neolithic on turn two or maybe three, having split up my stack of nomads and sent them haring around the wilderness in search of primeval secrets to build my knowledge store. On my second playthrough, however, I split up my nomads as before, but focused on hunting animals instead. The wanderers picked up more and more food, but I kept splitting their ever-growing stacks before they could reach critical mass and settle down. 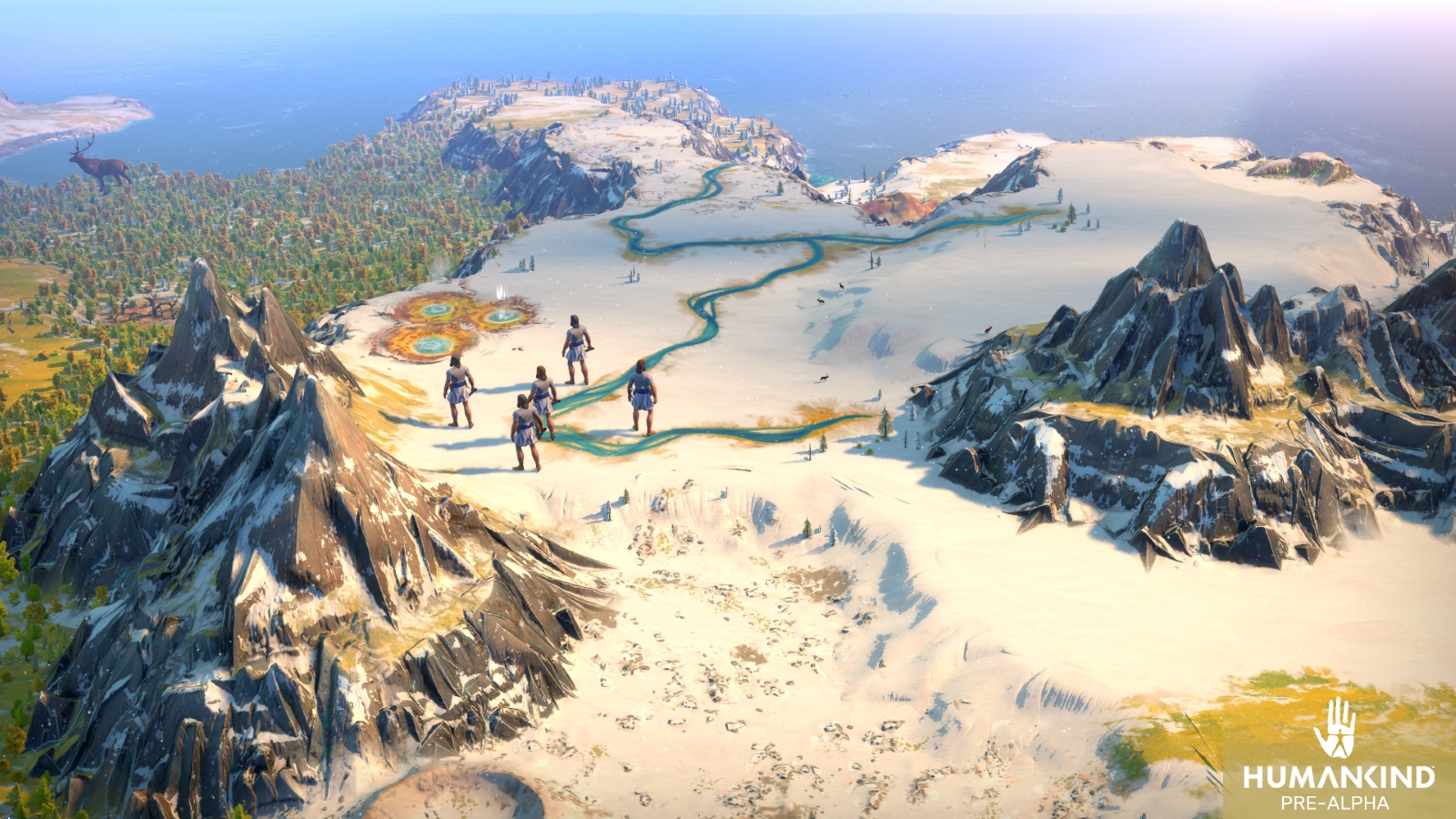 Having a nice ancient wander.

When I eventually did found a city and kick off the Ancient era, eight or nine turns in, my Von Neumann swarm of cavemen all levelled up into scouts, and had the rest of the map explored in no time. Sure, I’d lost crucial development time in my late-blooming capital, but the many gains I acquired through my scout horde more than made up for it. And according to Amplitude, you can push the Flintstones life even further, staying in your state of arrested development for as long as sixteen turns or so without incurring a serious competitive disadvantage.

These sorts of alternative routes presented themselves in many areas of the game. Rather than Civ’s anything-goes early game land grab, Humankind divides the world up into territories, which become the sole preserve of a player, once they’ve popped an outpost down somewhere within one. This outpost can eventually be levelled up into a city itself, and while there can only be one per territory, you can move your outpost for a small cost, if you spot a better location nearby. It’s a smart system, borrowed in part from Amplitude’s earlier 4X Endless Legend, and somewhat mitigates the fear that if you don’t guzzle up all the land you possibly can as soon as possible, your competitors will settler-swarm the entire globe, right up to your doorstep. 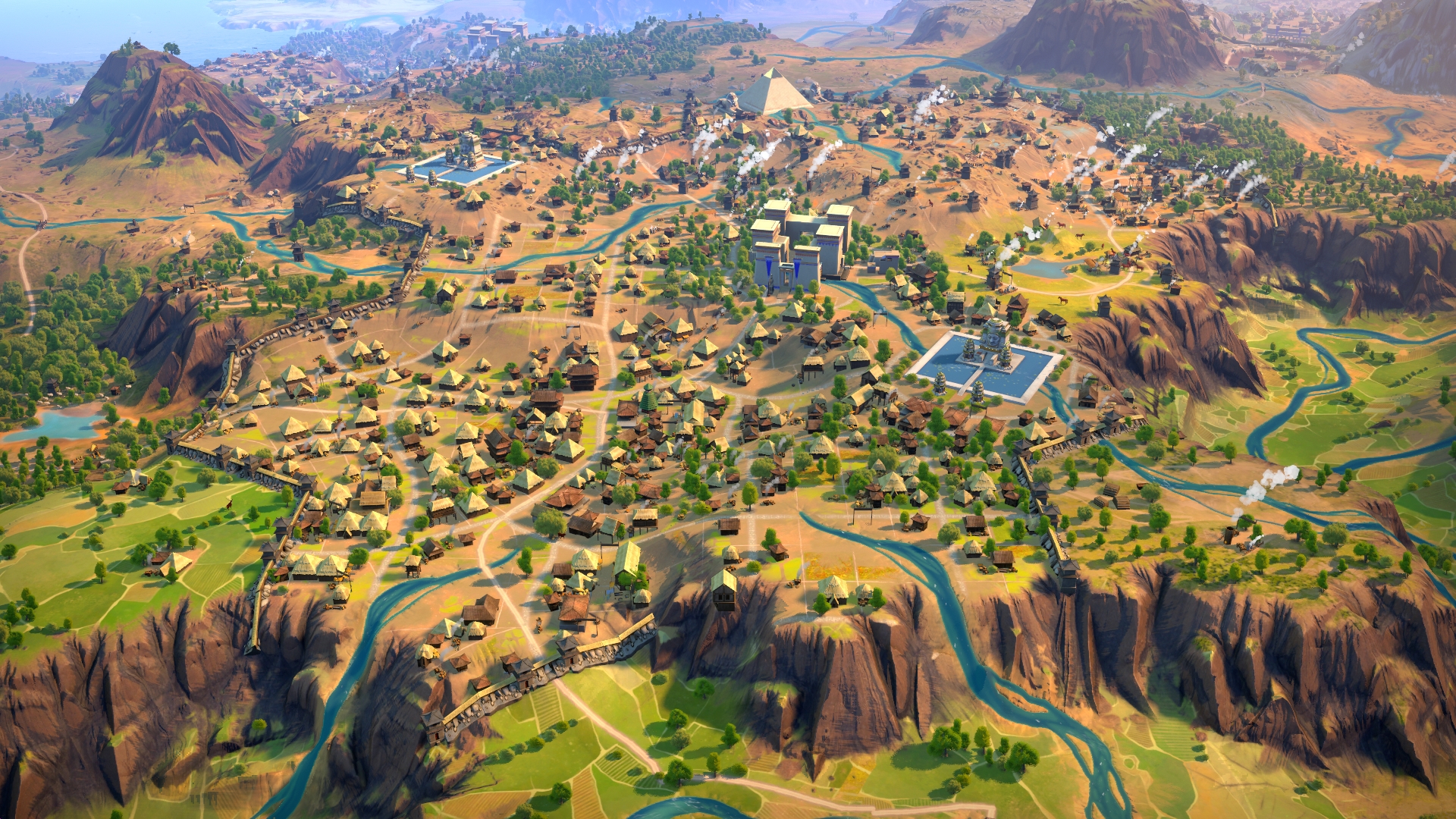 You can get a lovely sprawl going.

And yet still, there are alternative ways to go about the claim game. In one playthrough, I focused on getting down as many outposts as I could, securing vast tracts of land, but costing a lot of the gold I might have otherwise used to level up outposts into cities. The next time, I relaxed a bit, putting down a handful of outposts in surrounding territories, but preserving the bulk of my gold for upgrading a trio of cities. It’s a variation on the classic 4X quandary of building wide versus building tall, of course, but I think it’s an elegant one.

City building itself, by the way, is extremely satisfying. It’s not dissimilar from Civ 6’s district system, wherein you’d specialise certain hexes around the city centre to specific tasks, gaining adjacency bonuses and such from placing them cleverly. But while Civ allowed free placement of districts within a 3-tile radius of the central tile, Humankind lets you build way, way further out – but you have to get there one adjacent tile at a time, starting from the middle. Thanks to this system I ended up with one city that was like a long, Babylonian worm stretching down the coastline of a continent, and another that made its way onto a rocky plateau via a sort of tendril, before blossoming into a load of mines. It stops all cities from looking virtually the same, and works as a great complement to the game’s utterly stunning-looking terrain. 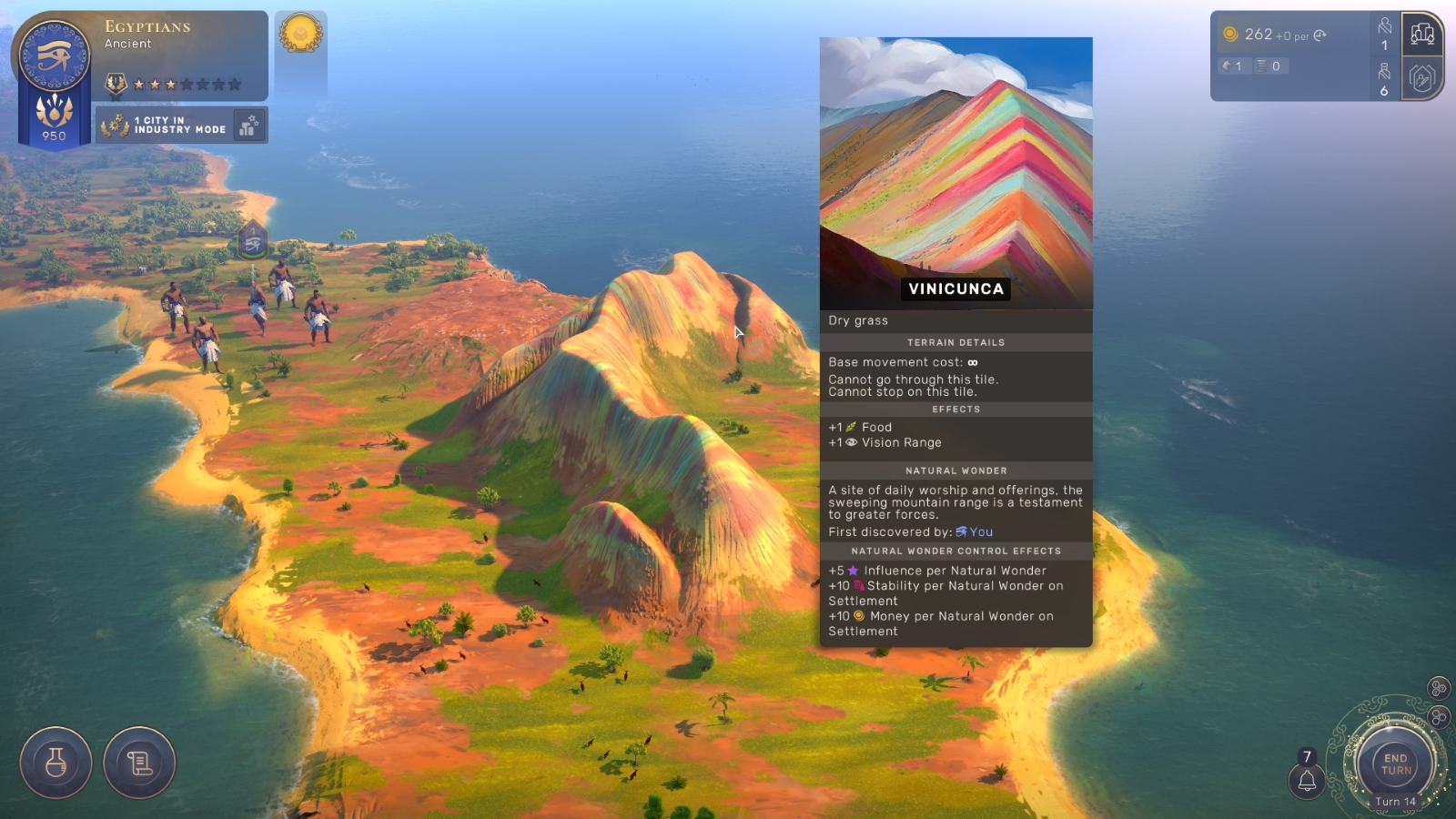 Seriously though, isn’t that gorgeous?

You’ll no doubt have read that in each of Humankind’s eras, you choose a new culture to add to the one you’ve got – so you might start with Egyptian culture, before adding Khmer in the second era, Chinese in the third, and so on, until you ended up with a sort of cultural version of a fruit pastilles ice lolly, largely defined by your current pick, but bearing perks and idiosyncrasies left as legacies from your previous choices. It’s hard to say exactly how this will play out, or how different Humankind’s much-advertised “million possible combinations” will actually end up being, as I only got to play the first, Ancient era for this preview. But there were science-boosting calls I was making as the Babylonians that I could imagine having all sorts of handy ramifications to later iterations of my civilisation.

This chop-and-change mechanic is probably the strongest example of the game’s ethos of versatility. In a Civilization game, you’ll probably know which of the alternative victory types you’ll be gunning for from the moment you boot up. You’ll choose your civ, and make all your choices in-game to min-max your way to that particular outcome. But Humankind has only one victory type: a general, all-encompassing one based on how much “fame” (a.k.a points) you accrue over the years. There are many ways to gain fame – from conquest to research to exploration to cultural achievement – and the game’s set up so you never have to get yourself stuck in one particular rut by choice. If you found that your Ancient era was a bust for the age of rational discovery you’d hoped to achieve, for example, you could always knock that on the head, choose a culture with loads of martial bonuses, and go on the rampage for the second era. 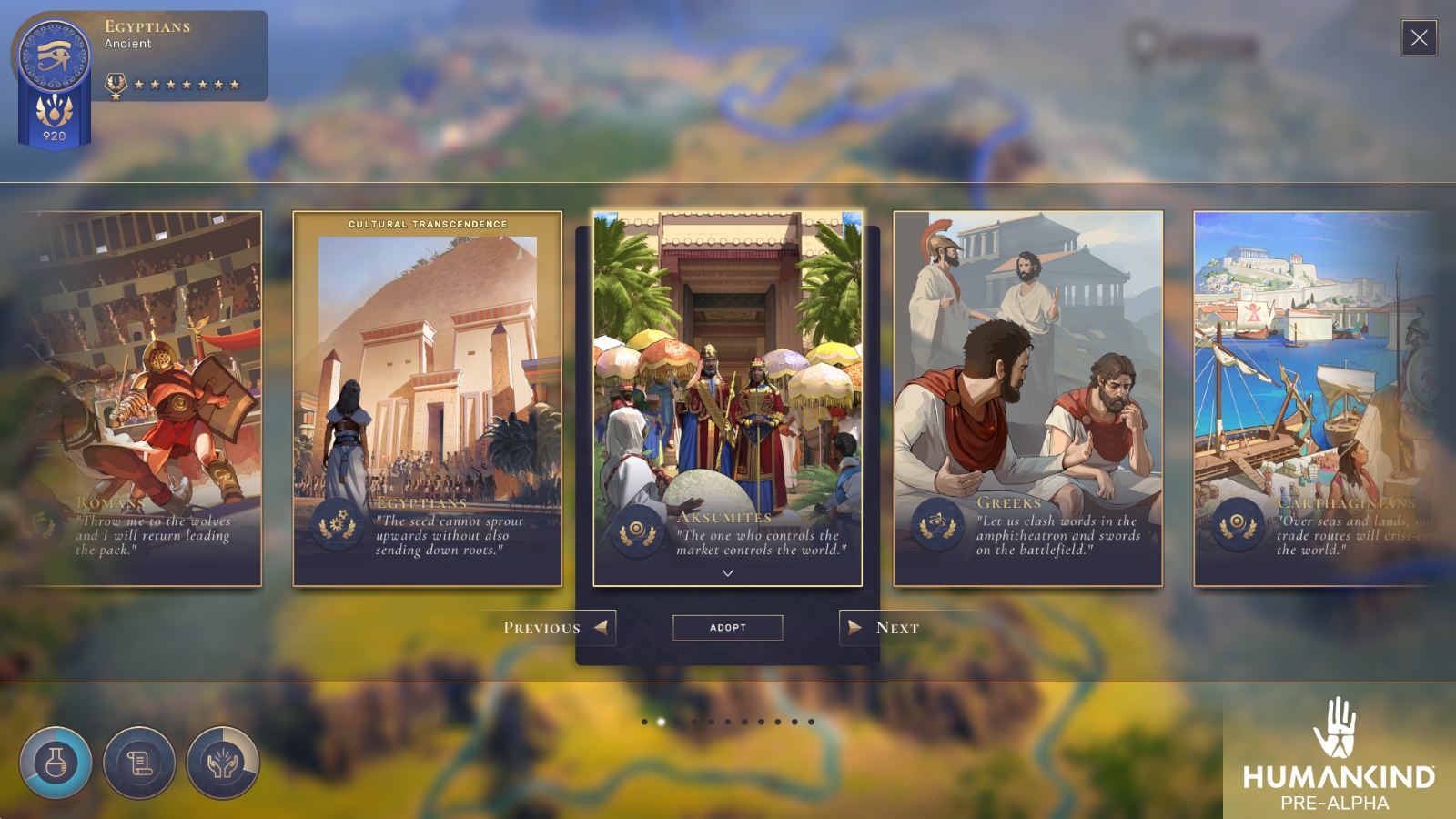 Looks like commerce is back on the menu, boys.

Humankind’s handling of civic ideas is neat, too. Taking a leaf from Paradox’s book, the game sets your civilisation on a set of sliding scales, between poles such as liberty and tyranny, and aristocracy and… not aristocracy. I can’t remember the actual names used for the concepts, but you get the idea. As your civilisation accrues stability (a resource earned by maintaining measured growth and not merging too many cities across territories into hypersprawls), you’ll reach little narrative decision moments where you can choose to lurch towards one pole or the other, and your movement along the scale will alter a whole set of modifiers to your civ. 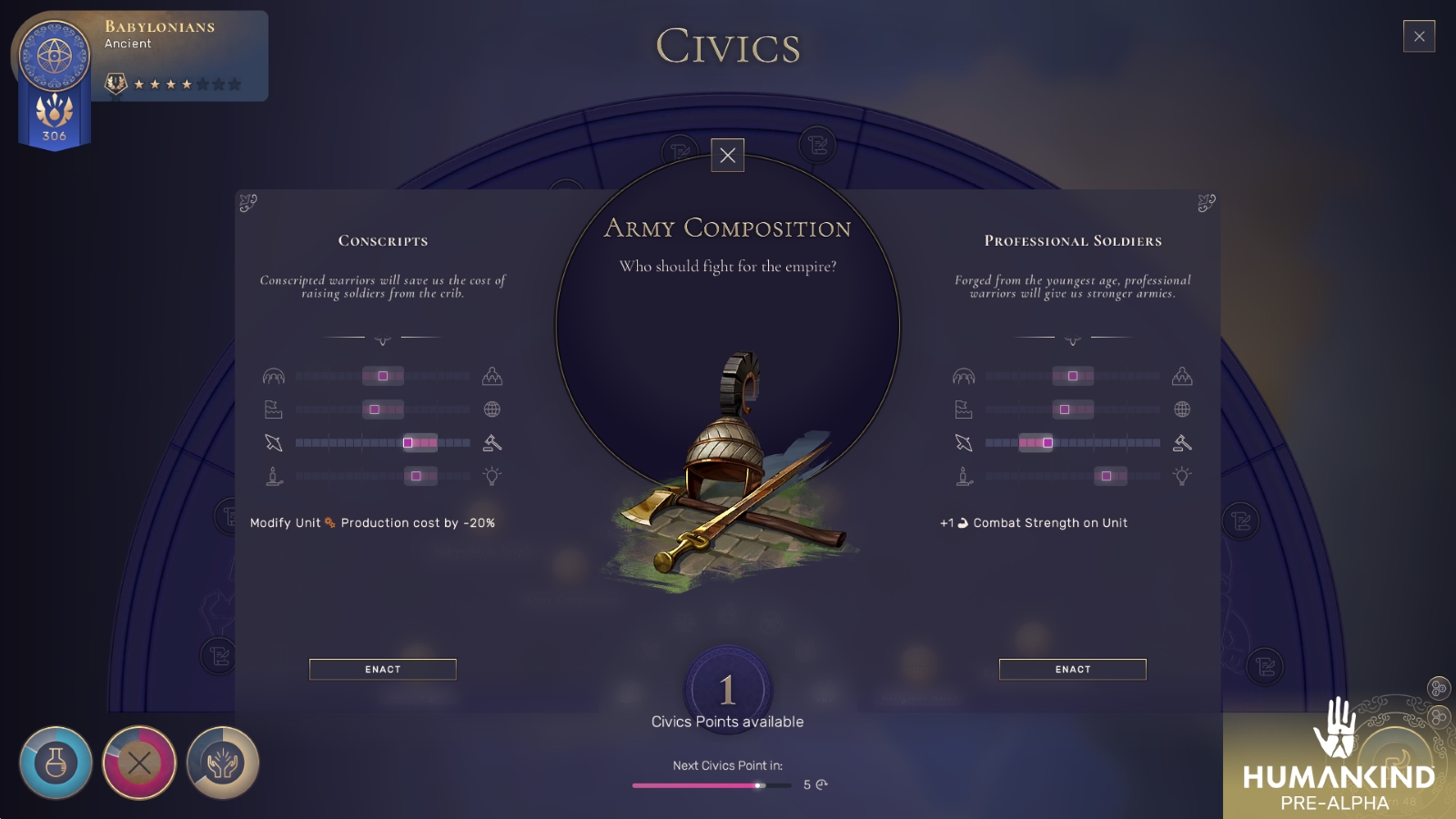 But what if we don’t want anyone to fight? :(

I want to talk about combat another time, I think, as I got the feeling it was still being worked on a lot. In short, though, it takes a “best of both” approach to the two main models used by the Civilization series over the years. Your armies move as stacks, but don’t fight as them: when your forces clash with those of the opponent, an area of hexes is cordoned off from the world map, external time stops, and you deploy your troops in this instanced battlefield to have a little turn-based Barney. Since I was playing a peaceful game as the Babylonians and then a buildy game as the Egyptians, I didn’t get to fight much, but I’ve seen the fights demonstrated, and they seem like a solid tactical sublayer.

Again, though, I’d want to road test the combat system with my own Battle of Manzikert, or my own Somme, before I can say how fun it is compared with what has gone before in the genre. That’s my takeaway overall from Humankind, as it stands. Just like my nascent Babylonian civilisation, who I left just on the cusp of becoming Romans, it’s absolutely rippling with potential. But only the passage of the ages was going to reveal just how those promising starts developed over time, and the proof would be in the 5,000-year pudding. Luckily, then, unlike my simulated Babylonians, I only have to wait until 2021.