I don’t like rocket jumping. It is silly. And yet, I had a good time with Rocket Arena, the upcoming online shooter, when I played in a closed preview event a bit over a week ago. It’s coming on July 14 from Final Strike Games, via little known indie publisher Electronic Arts.

The original version of Rocket Arena was a mod for Quake, which your dad will wrongly tell you was about more than just being brown and overrated. Its popularity led to spin off mods in pretty much the whole series. The general idea was to level the playing field, removing health and weapon pickups, and giving everyone the same equipment.

Interestingly, the new, standalone Rocket Arena is almost the opposite of that concept, as it’s a class-based shooter with a form of regenerating health. But then, it’s been decades. Online shooters are a different world now. Which raises the question of what Rocket Arena does to stand out.

Probably its defining trait isn’t the rockets. Although each of its main weapons is, yes, a rocket launcher, many of them are functionally much like regular guns, and it’s the damage model that matters. Instead of health ticking down from 100%, the game counts damage upwards, and when you’ve been hit enough, you reach a critical state where the next scratch of damage will blast you out of the arena for a KO. Treasonous readers who play games on platforms other than PC may recognise this as similar to the system in a game called Smash Bros.

Somehow on a psychological level this changes everything, as you watch someone’s counter go up and up. We all love filling progress bars, right? And then, crucially, you have to get just that one last hit in. Chasing that final hit often feels thrice as difficult as doing the far heavier damage that preceded it. It works in reverse too, as you’ll feel invincible until you’re suddenly desperate to flee and hide for the few precious moments it takes for your damage to cool back down. 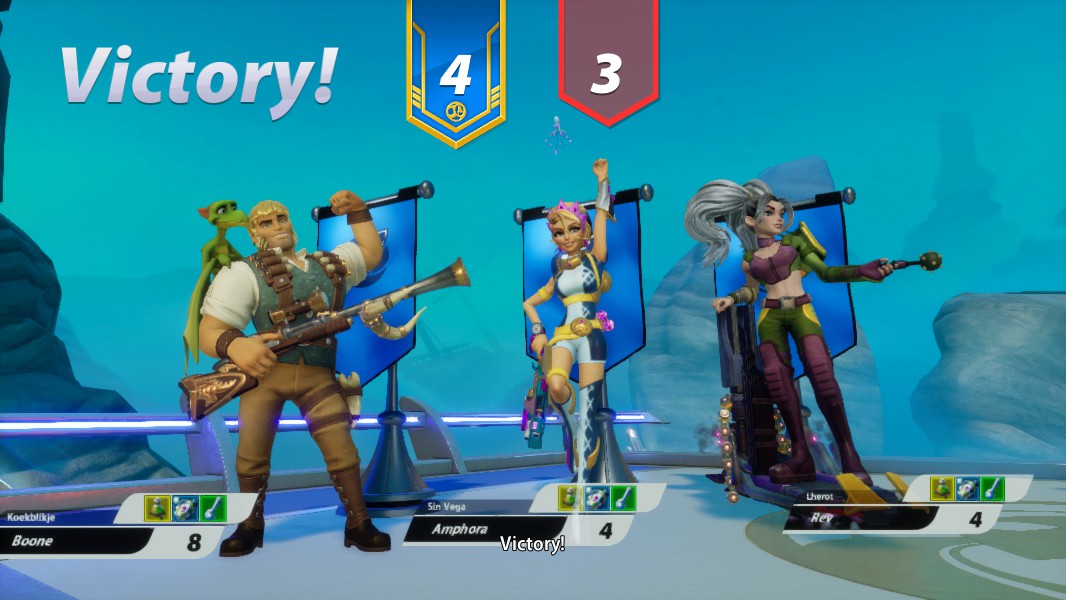 The rocketball dream team. I imagine there’ll be nerfs.

The downside is that there’s an element of stunlock to most attacks, and that can feel very frustrating at first. Sometimes it’s hard to tell where damage is coming from as you get spun around so much, attacks tend to launch people skywards, and of course when you’re highly damaged you suddenly become a tempting target for everyone. The triple jumps and rocket jumps add much z-dimension hopping, but can make the frantic fights disorientating too. One key tip I overlooked for too long was that the dodge button does far more than avoid an incoming attack: it cancels out any stunlock for a vital moment too, and learning to use it effectively is where you begin to step out of beginner territory. Getting used to the characters helps, of course.

Those characters are well defined. There’s your big pirate lad soaking up hits on defence, detonating defensive bombs, and firing weak but continuous arcing cannonballs with no reload. There’s Rev, whose weak rockets are more like a machine gun, harassing with hit and run dashes on her hoverboard before covering her retreat with light, fast-recharging grenades. There’s Boone, who in theory can cover any range, but whose shotgun is so underwhelming I genuinely couldn’t tell if it was even firing. His alternative fire, though, is basically a sniper rocket, making him a damage dealing monster in deathmatch. Each character has two unique attacks, plus a special power that recharges. One turns into a fast-moving puddle, then reverts in a column of damaging water. Another gets a jumping and damage boost. None felt overly specialised, but some have major advantages depending on the game mode. 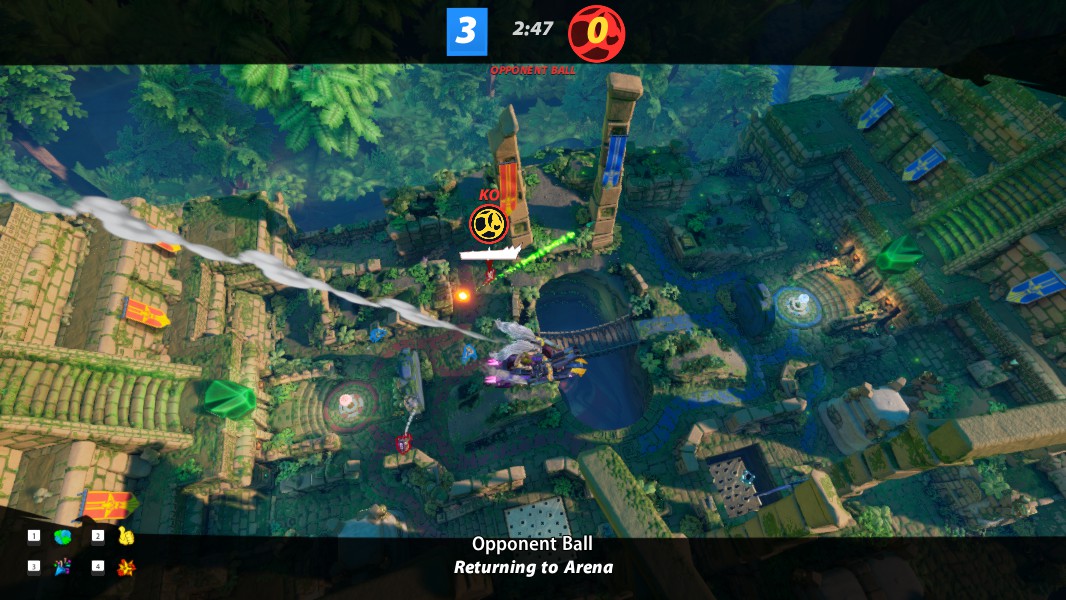 The maps are hard to show off but they look lovely.

In the modes I’ve seen, six players face off in teams of 3v3, either in traditional team deathmatch called Knockout, a game of Rocketball, or Treasure Hunt. The latter mode alternates between a king of the hill mode, in which whoever grabs the singular treasure chest gradually loots it of money for their team, who should be protecting them while the enemy try to take the chest back, and a mode where coins appear around the level and everyone runs to collect them.

Although it makes things a bit more chaotic and encourages movement around the map, it’s definitely the weaker mode. Once a team gets in the lead, the result is a foregone conclusion, and players largely ignored each other to chase the coins. Actually retrieving the chest was difficult too, as players felt a little too hard to take down. This carried over to Rocketball too. This mode is much as you’d expect: each team guards a goal (spherical, oddly), a single ball spawns, and whoever touches it must carry it to the opposing goal to score.

My top tip was this: If you don’t have Rev or Amphora in your Rocketball team, you’ve already lost. They’re the fastest players, see, and whichever of them gets the ball first will probably score. In theory the other team can play defensively, but actually finishing off a ball or chest carrier proved difficult enough that I soon felt guilty about repeatedly scoring four or five times in a row.

But while this all sounds very negative, the key thing is this: I had a great time with Rocket Arena. It ebbed and flowed, as any online game does over several hours, but it was for the most part a good time. Most of the criticisms I’ve laid out above come down to balance testing, which is precisely what the preview build was for, and I’ve no doubt that Final Strike Games will fine tune these details (if they haven’t already). 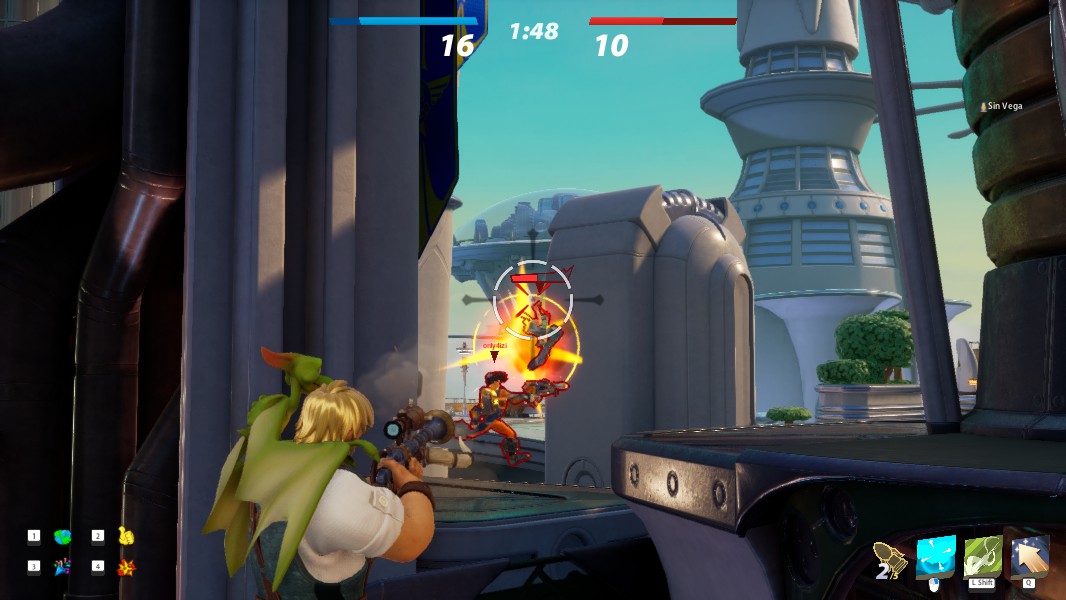 A minor bug stuck my graphics to ‘medium’, but it ran very smoothly indeed otherwise.

I had several great games of Rocketball in particular, both winning and losing, and the highlight was a fiercely fought 2-2 in which every point raged back and forth for several minutes, with some actual tactics and passing in between the frantic scrums. My biggest complaint there was that rounds reset when a point is scored, making things feel samier and less fluid than one continuous round, and worse, when the drawed game fell to sudden death, a new round was started instead of letting us continue the entertaining scrabble. I immediately grabbed the ball that time and scored, but actually felt disappointed to win that way after such a good match.

Beyond specific matches, I’m told that it will be “not pay to win, we’ve made it extremely fair in every way”. After each match there are things levelling up and ticking over, but I honestly paid zero attention to any of them and could discern no changes over time beyond some players changing their character model a bit. We’ve been told players can expect more maps and characters, and a new Mega Rocket game. There’ll also be ranked playlists that reset each season, as well as daily and weekly challenges, cross platform with Playstation 4 and Xbox One players, and finally a slightly mad “350+ unlockable cosmetics”. I’ve no idea what kind of reception it will get, but I’d be surprised if it doesn’t find some fans, as what’s on show here is already solid.