You know what takes a lot of managing? All the demos in the Steam Game Festival: Summer Edition. There are blimmin’ 900 of them. And coincidentally, I have gone through and collected some of the best demos on that theme.

Rockets, monsters, pirates, wine and fish: what do all these things have in common? You’re in charge of their efficiency, that’s what. If someone wants to speak to their manager, that’s you, that is. Because these are management games, and they’re all about making things efficient. They range from the educational to the absurd, the clean-cut to the deeply weird, but they all managed to bathe my brain in the lovely feelgood chemicals that only come from making things work just right. Or at the very least, the abrupt mirth that comes from things going horribly wrong. Let’s evaluate their performance: 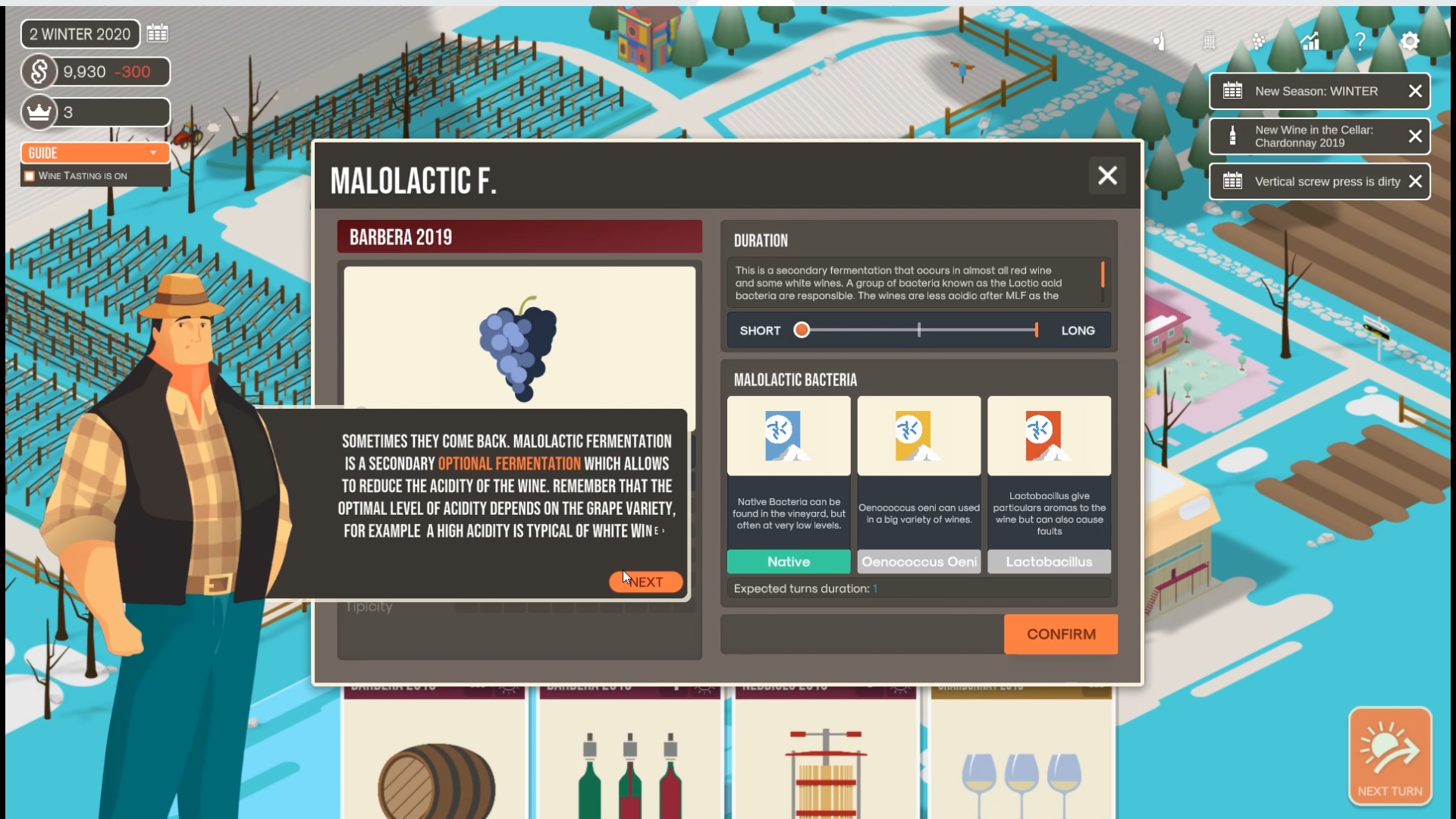 Your advisor there is a large man. He gives the faint impression of being Gaston off of Beauty And The Beast’s more chilled-out dad.

What is it? A vineyard management game that will teach you all about wine, and make you do a bit of tetris along the way.
Who’s it by? Broken Arms Games
When is it out? “Coming Soon”

Like most people, I don’t know much about wine, but when I’m confronted by someone really posh who does, I’ve got a terrible habit of bluffing and pretending I do know about wine. The thing is, the world of Wine Chat seems to be equal parts science and bullshit anyway, so it’s always so tempting to think that if you’re lacking in the actual knowledge part, you’ll be able to get by by spouting guff about “body” and “notes”. Enter Hundred Days, then, a gentle vineyard simulator which – to my surprise and delight – managed to give me a shockingly effective hour-long crash course in how wine is made, from grape-pruning right through to label design, and what makes for a good one.

The mechanic at the heart of Hundred Days is simple. You’ve got a certain amount of space in your vineyard, arranged as a grid, and each month you can carry out a series of activities on that grid, represented by tetris-like tiles that you must find a way to fit into the space available. When you place certain activities, you must decide on certain variables that will effect the eventual qualities of your wines, such as how hard to mash the grapes, how long to age the wine, and what sort of barrels to do it in. You’ll have different grape varieties maturing at different times, and each one needs a series of activities to take place – pressing, fermentation, ageing, bottling, marketing – before it can go down the neck of a businessman. What’s more, some of these activities take multiple months to accomplish, meaning they persist on the board, and you have to fit in new processes around them.

The puzzle aspects of Hundred Days aren’t that challenging, and if I’m honest your wines seem to end up pretty good no matter what decisions you make in their production process. But really, I don’t mind. I saw this as a relaxing, interactive way to learn about a subject that turned out to be way more interesting than I thought it was, and I’ll be well up for playing the full game in time. Plus you can design your own labels for your wines, and call them whatever you like, which is of course a superb vessel for comedy. 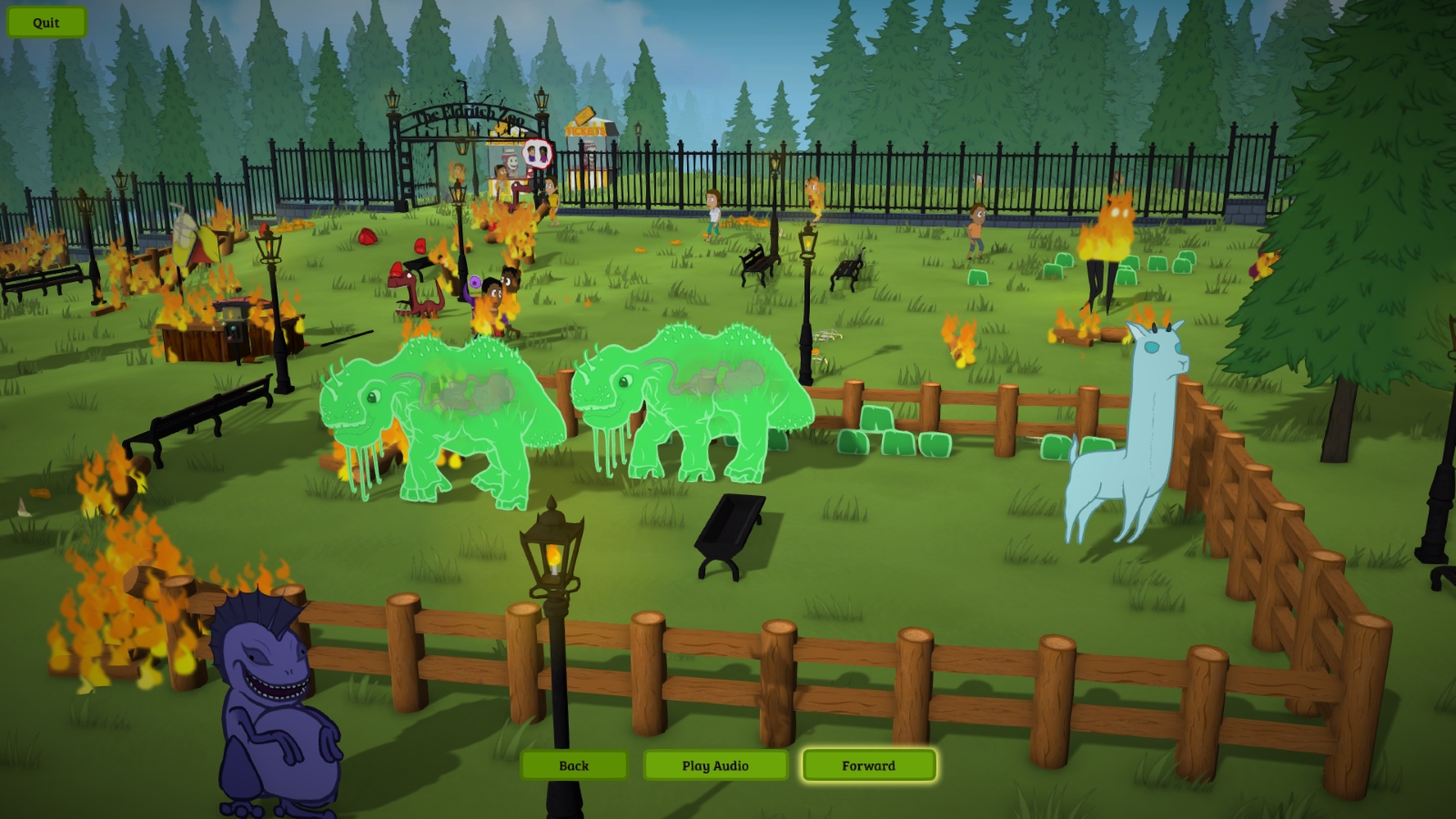 Just because the beasts are eldritch, doesn’t mean they have to be nasty. These gloopy rhino lads actually seemed quite friendly, in an unsettling way.

What is it? A lo-fi, pleasantly unpleasant management game with paper cut-out visuals and an adorable disaster of a demo.
Who’s it by? Cranktrain
When is it out? “Soon!”

“That’s just you, isn’t it?” said Alice Bee to me, when I told her the name of this game. And it’s true, I am something of an eldritch zookeeper myself, given the horde of mantises, hermit crabs, geckoes, crayfish, fish, snails, shrimps, notostracans and a single cat that share a roof with my family. So of course, I had to play this. I should be clear: of all the demos I played during the summer festival, The Eldritch Zookeeper’s was hands down the most rubbish. It wasn’t even playable – it was just a short tour of one of the developer’s save games, narrated by them using a ropy microphone in their bedroom, and with interactivity limited to “click here for the next sentence”. But I’m going to 100% recommend you download and play it anyway, because it was utterly fackin hilarious.

The actual game didn’t look like anything too special. Even if the creature designs themselves were really cool, the whole thing had an MS-Painty, 2D cut-out look that I was distinctly ambivalent about. And by the looks of it, it would play like an even more abstracted version of zoo tycoon: build a fenced-off area, dump animals in it, and make sure they have the right food and/or enclosure furniture to keep some kind of happiness bar full. There was some cute humour to it all, but that wasn’t what made the demo so spectacular. No; that would be the fact that halfway through the tour, the zoo caught fire, ignited by a spark from a beast with a flaming head, and almost immediately, the narration became completely irrelevant.

The developer was describing the things you’d need to plop down to make your zoo function well, but they’d already burned to the ground. The camera would zoom to creatures that were already offscreen, eating burning visitors. It was a complete disaster, and I was roaring with laughter. Now, if this was deliberate, then whoever designed this demo is a stone cold genius. And if it was accidental, then this game has potential for some serious belly laughs. I’m not sure how much longevity it’d have, but it’s certainly worth a go.

Get the free The Eldritch Zookeeper demo here. 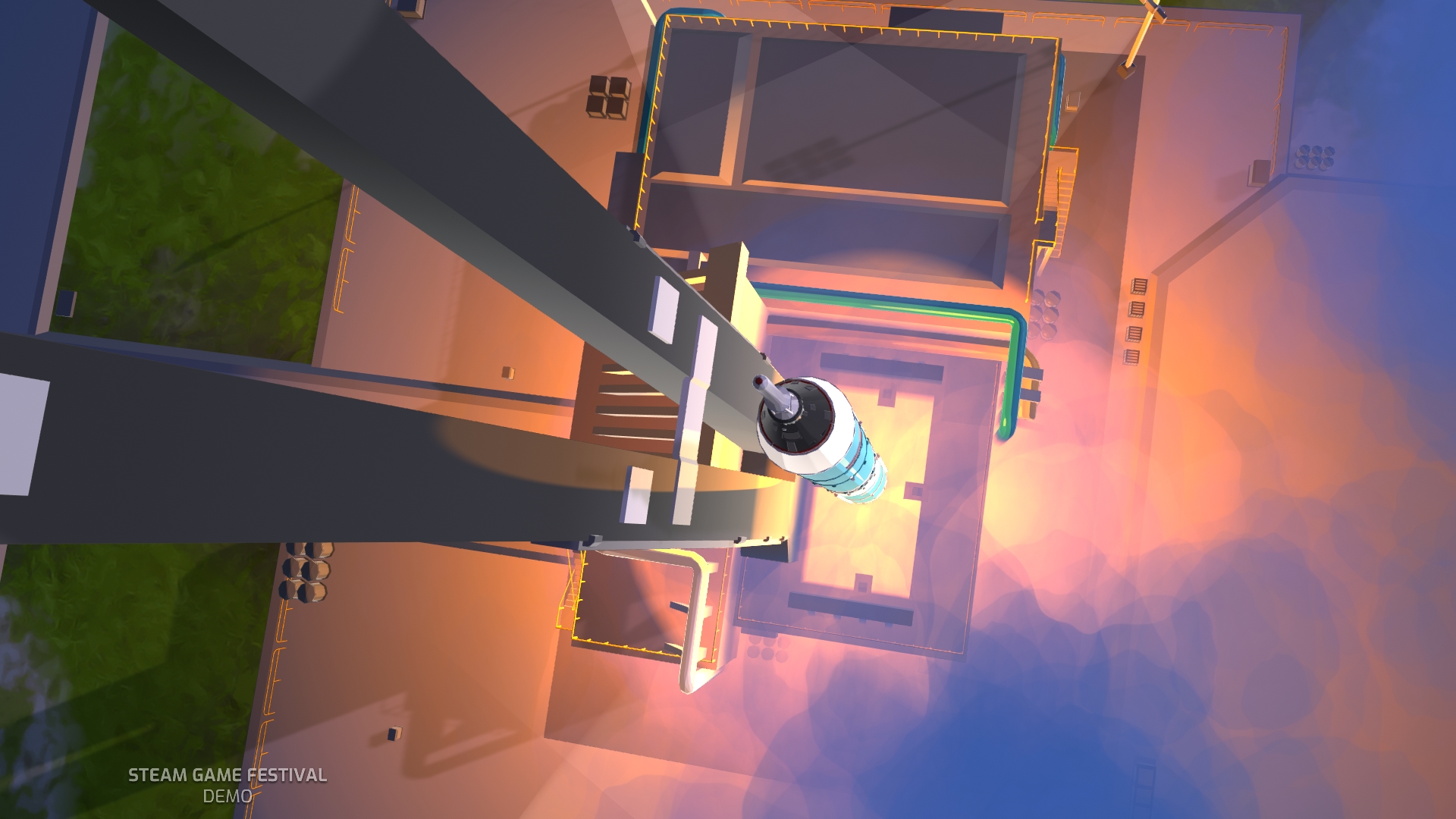 There’s a chimp in there, going into the void to die. And yet still we cheer.

What is it? A sober yet chirpy management game about the space race.
Who’s it by? Auroch Digital, The Irregular Corporation
When is it out? “2020”

The space race is a superb theme idea for a management game, and Mars Horizon is a solid – if perhaps undercomplicated – treatment of it. This demo covers the early years of space exploration, from 1950s Sputnik stuff, through to just before the first moon landing, and lets you play as NASA, the Russians, or the ESA. Eventually, as the game’s name suggests, you’ll be able to play right through to the landing of humans on Mars.

You have a base of operations from which you launch missions, and a research programme, where you can invent new bits to make rockets out of, new buildings for your base, and new types of missions. Later in the demo, you can hire astronauts, too. The launches themselves are great fun. After spending ages, and fortunes, getting together all the bits for your rockets, there’s always a chance they’ll malfunction catastophically – and potentially fatally, if manned. And while you do everything you can to squeeze the possibility of failure as close to zero as you can, there’s no eliminating it entirely, which adds a huge degree of tension I’ve not often experienced in a management game. You end up glued to the short cinematic of the launch, teeth gritted for the horrific explosion, and when mission control erupts in cheers, you really feel the relief.

Once your rockets are in space, there’s a pleasant enough minigame that represents their missions, and which involves taking risks on processes that transform symbols into other symbols, in the hope of ending up with pre-specified quantities of symbols. If you think I’ve done a poor job of explaining that, you should see the game’s attempt. It barely explains it at all, and leaves you to figure it out for yourself, but that’s fine, as I figured (perhaps generously) that that was… part of the puzzle?

As I say, I’d have liked to have seen more complexity in such a massively intricate field of human endeavour, but then I suspect a lot of that will come in post-moon landing. It’s certainly a pleasant use of a couple of hours, even as it stands. 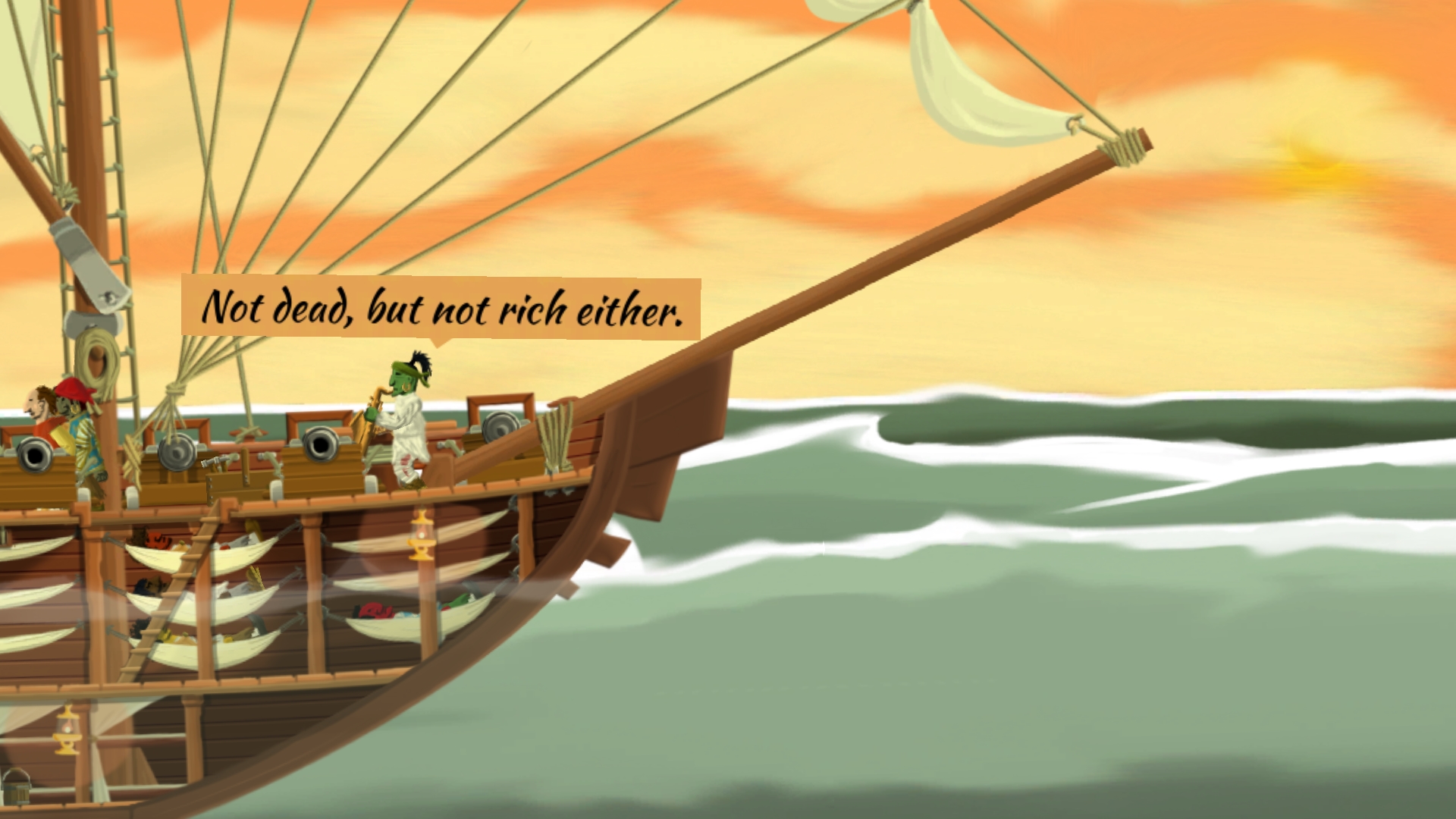 See, I’m just coming to terms with the idea that this is a really intense, deep simulation of pirate life, when it hits me with an orc playing a saxophone. A Pirate Quartermaster really shifts gears on you.

What is it? An astonishingly intricate, utterly weird game about managing the daily life of a fantasy pirate ship.
Who’s it by? Ivan Armandy
When is it out? “2020”

Well, this game was weird. And possibly quite brilliant, too. I’ve never played anything like it, to be honest. It’s at once an obsessively complex deep dive into maritime history, but set in a strange fantasy world, and a weirdo RPG about being a pirate. There’s worker placement activities. There’s dialogue segments. There are resource management elements. Ship-to-ship combat involves a (fucking astonishing) typing game, and then a sort of side scrolling beat ’em up bit? A huge element of the game revolves around managing your relationship with the ship’s captain, and choosing how often to contradict their orders. There’s eerie, awful, brilliant music. It occasionally reminded me of Dwarf Fortress.

What I’m saying is, there’s no way of summarising A Pirate Quartermaster in a couple of paragraphs. It was like a game made in a parallel universe with entirely different ideas about what a game should be like, and I’ve rarely encountered something with such a hit rate of entirely original mechanics. The demo only let me dip a toe into this odd and salt-stained world, so it’s hard to say whether the full game is likely to be entirely engrossing, or a barely-playable mess. Either way though, and I don’t say this lightly, it’s some kind of masterpiece. Don’t let this ship pass you in the night.

Get the free A Pirate Quartermaster demo here. 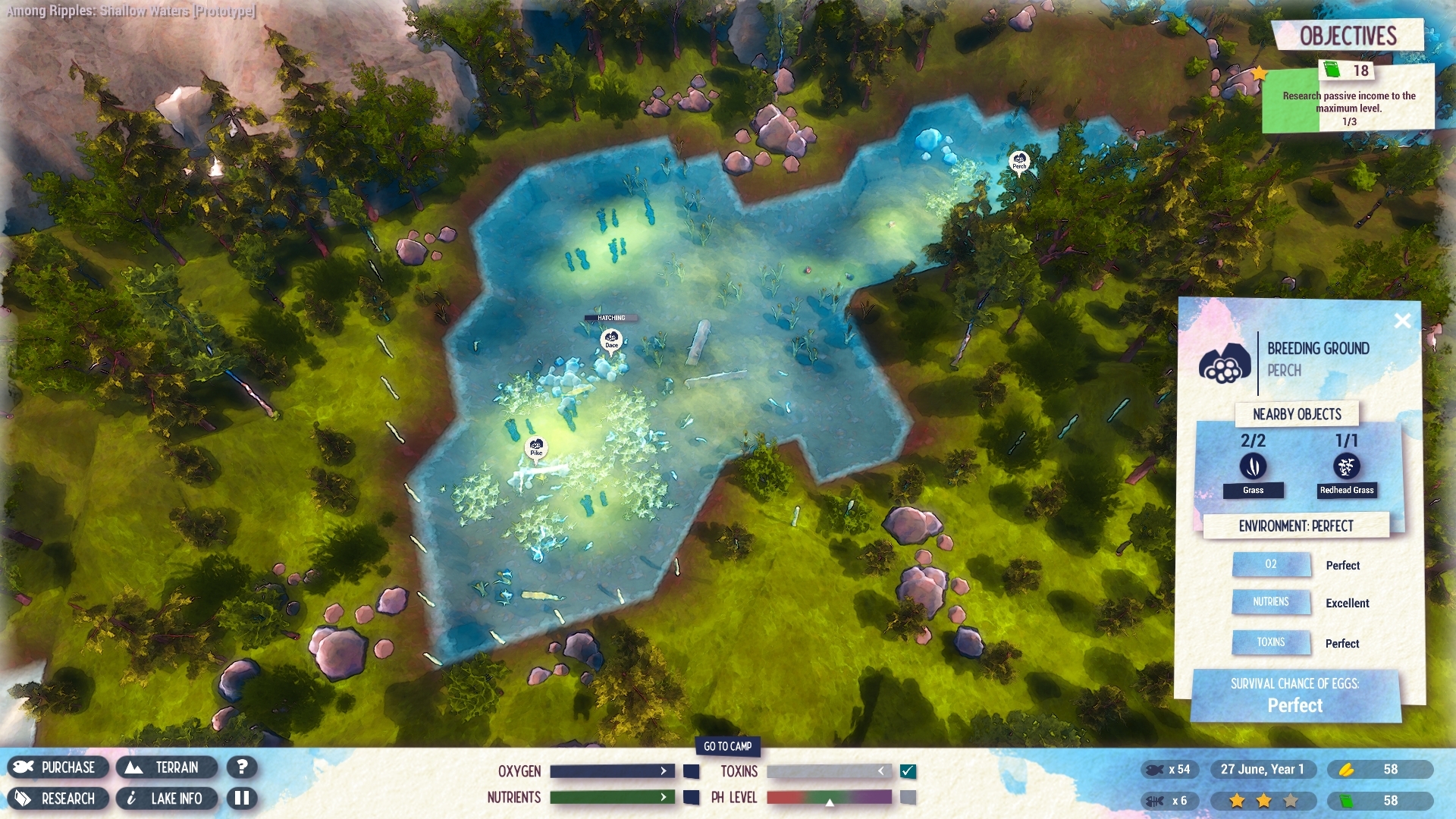 What is it? A calming, down-to-earth lake management game about ecological repair.
Who’s it by? Eat Create Sleep.
When is it out? “2021”

I’ve already covered this game loads, but it’s back for the Game Fest after developers Eat Create Sleep found a publisher to take the game ahead following a failed Kickstarter, and so I’ll take another opportunity to urge you to give it a go. If you like calming ambience, freshwater wildlife, or the idea of a management game that manages to run contrary to depressing narratives of perpetual economic expansion at the expense of the natural world, you owe it to yourself.

Get the free Among Ripples: Shallow Waters demo here.

A nice chat with Martin Greip

Among Ripples is a tycoon game with a conscience - and pike