Readers, I have put on my waders and made my way into the deep mill pool of the Steam Game Festival: Summer edition free demos. There are a lot, so I confined myself to RPGs. This isn’t an exhaustive list, of course, even though I got overexcited and did far too many, but it’s hopefully going to give you a place to start.

If you saw RPGs and thought “Christ, she’s done a list of all elves and wizards and that” then you’re wrong. There’s only, like, two elves, and the rest is an array of witches, sentient animals, magic paintbrushes and surreal dreamscapes. Wares to suit every purse (especially because these demos are all free for the weekend, right?). If you can’t be bothered to read the lovely words I spent ages writing for you, hit the jump to the bottom of page 2 and you can see the full list. 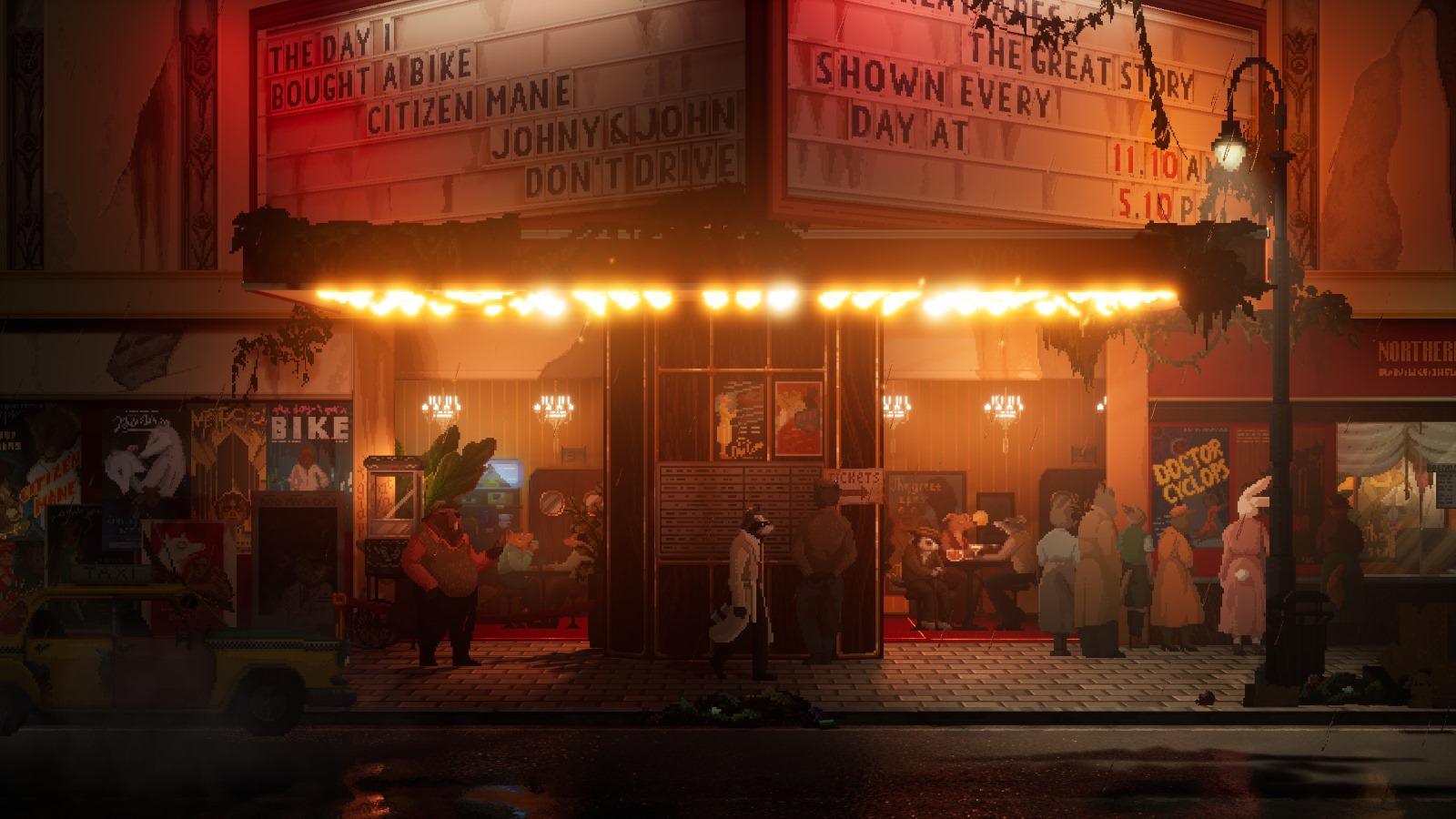 What is it? Neo-noir detective RPG where you are a tough-bitten raccoon in a tough-bitten overcoat, and everyone else is an animal too.
Who’s it by? EggNut, Raw Fury
When is it out? 2021

I’ve talked about Backbone before, because it is achingly stylish and I love a detective story as much as the next man, especially when the next man is Vidbud Matthew Castle. While the art in Backbone is luverly, especially the lighting, I think the thing that most excites me about it is the dialogue. I can take or leave an “animal species as racism” metaphor (probably leave, if I had my druthers) but Backbone is one of the first games in a long, long while where having a conversation with an NPC actually feels like having a conversation.

You don’t have a set 1,2,3 list of questions or options to ask. Your responses and dialogue choices evolve with the conversation, so you don’t end up in immersion breaking loops. After all, if you’ve just asked someone how their wife is, it’s weird to then immediately go “I’m looking for someone!”. And in Backbone, you can’t do that. You have to pay attention and think like you do when you have a chat in real life. 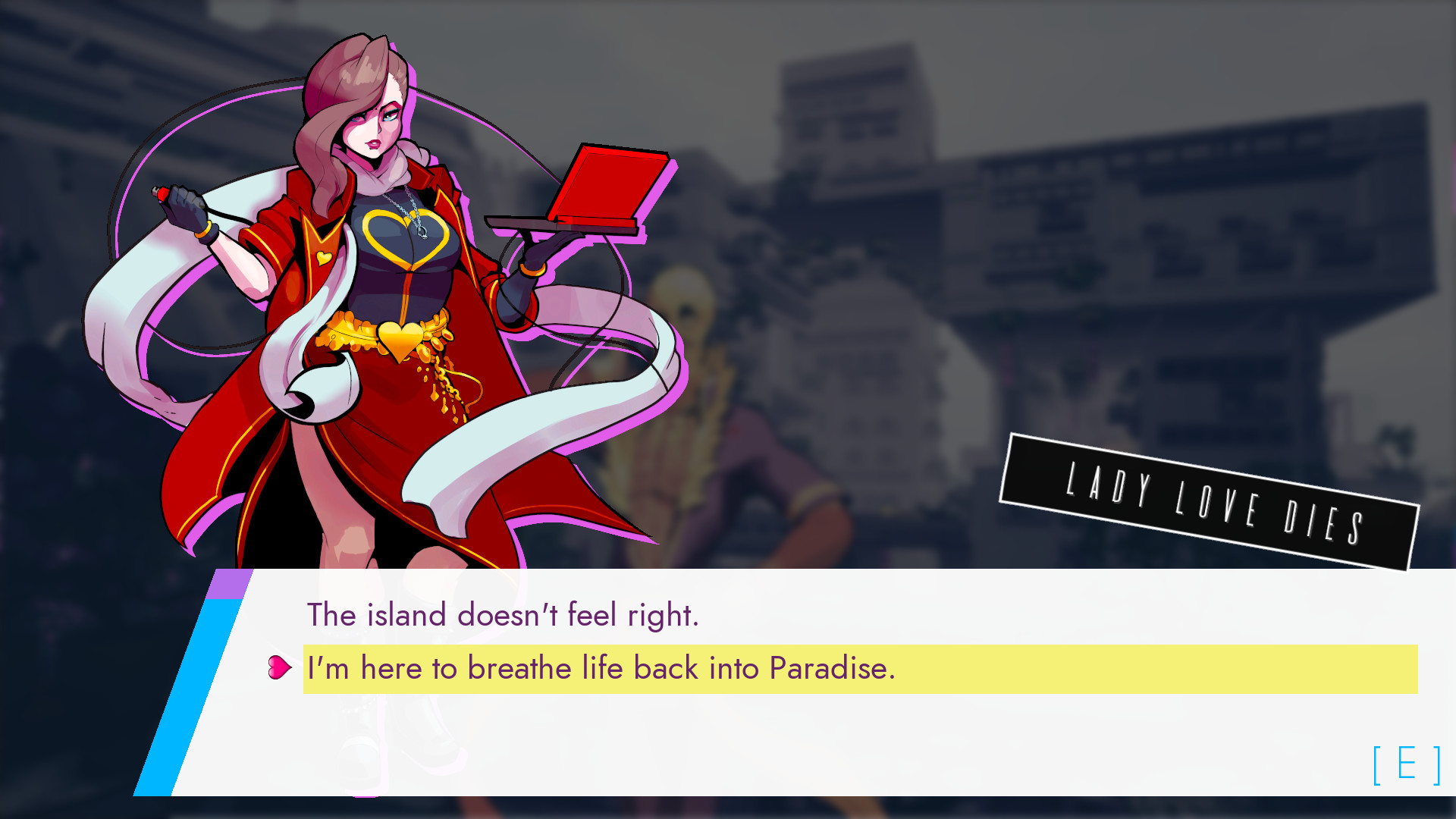 What is it? Distinctly less hard-bitten and more high-concept magical realism murder-mystery-exploration game set on an island outside of time and space.
Who’s it by? Kaizen Game Works, Fellow Traveller
When is it out? 2020??

I did wonder if this strictly counts as an RPG, but fuck it, it’s in the Steam tags for the game, so I’m ‘avin it. You play as “investigation freak” Lady Love Dies, which I spose is what denizens of unreality call detectives. LLD has been called back in for one last job [spits out toothpick] after being exiled for donkeys years for an undisclosed transgression. There’s been a terrible murder on Paradise Island, and as you explore the extremely weird 3D metropolis of unreality, you run into its extremely weird citizens – each a suspect! The case possibly involves ritual sacrifice, conspiracy, demons, jealously, and a space helmet that allows inter-dimensional travel. This is, I suspect, going to be a tough nut to crack. But what fun to split it open, reader! 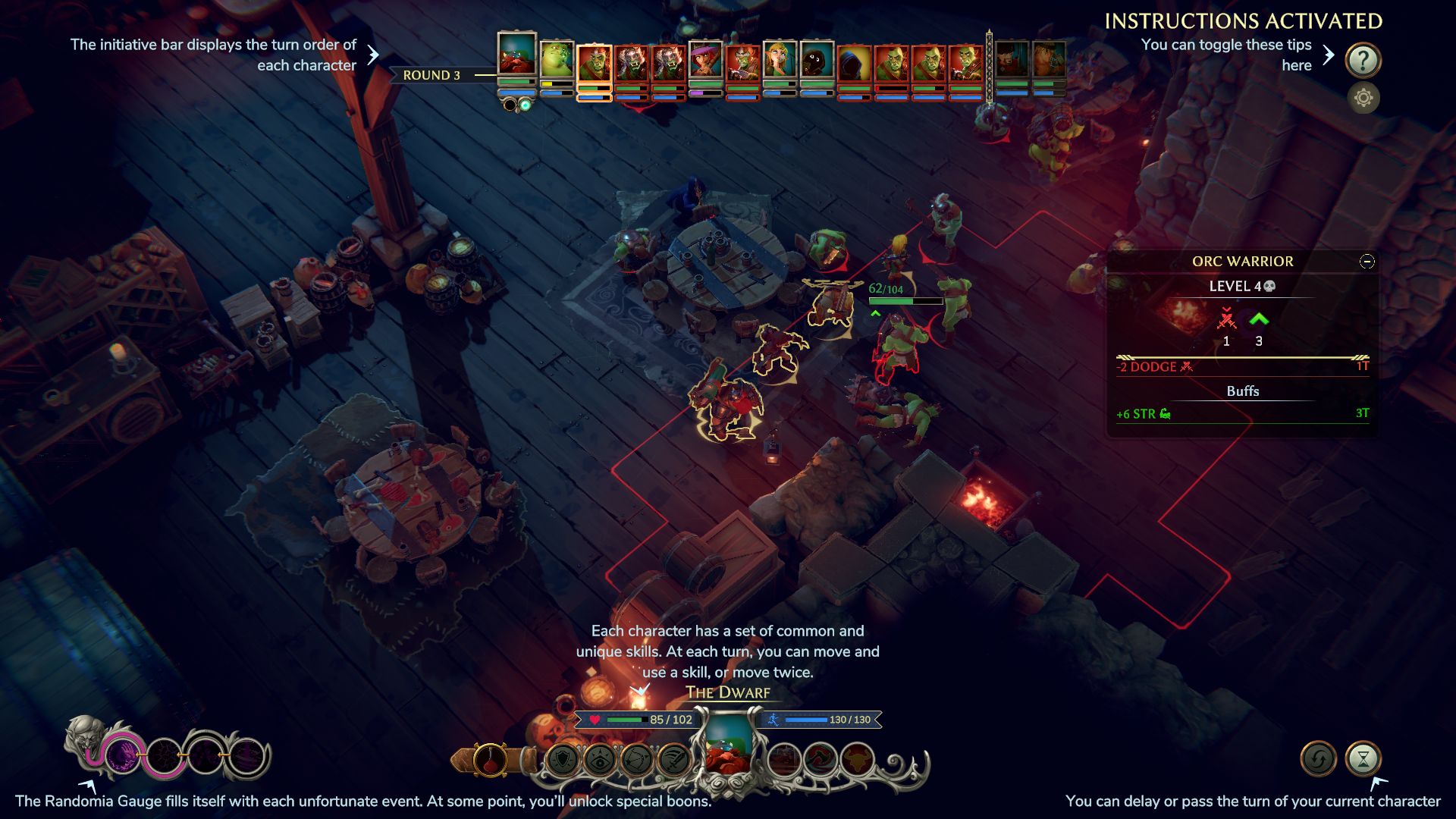 The Dungeon Of Naheulbeuk: The Amulet Of Chaos

What is it? Hyper-tropey D&D fantasy RPG, with tough tactical combat and its tongue in its cheek.
Who’s it by? Artefacts Studio, Dear Villagers
When is it out? Summer 2020

I first had a go of this one at Digi-Rezzed a few months ago (God, remember when we were allowed to go outside and gather in groups??). This is the only fantasy RPG with a name like The Something Of Something Colon The Thing Of Something Else where I can be reasonably sure that it’s a self-aware joke. That’s Naheulbeuk’s whole thing, really: massively taking the piss out of D&D. You lead a little band of adventurers through tactical turn-based combat in a grim dungeon full of orcs and what not. The archer is a blonde elf called The Elf, the ranger is an uptight beardy man called The Ranger, and the dwarf has a Scottish accent, an axe, and is called The Dwarf. Etc and so on. YMMV with the humour, as they say, but it belies the fact that the combat is bloody hard. You can’t sleepwalk into this one.

Get the free Dungeon Of Naheulbeuk demo here. 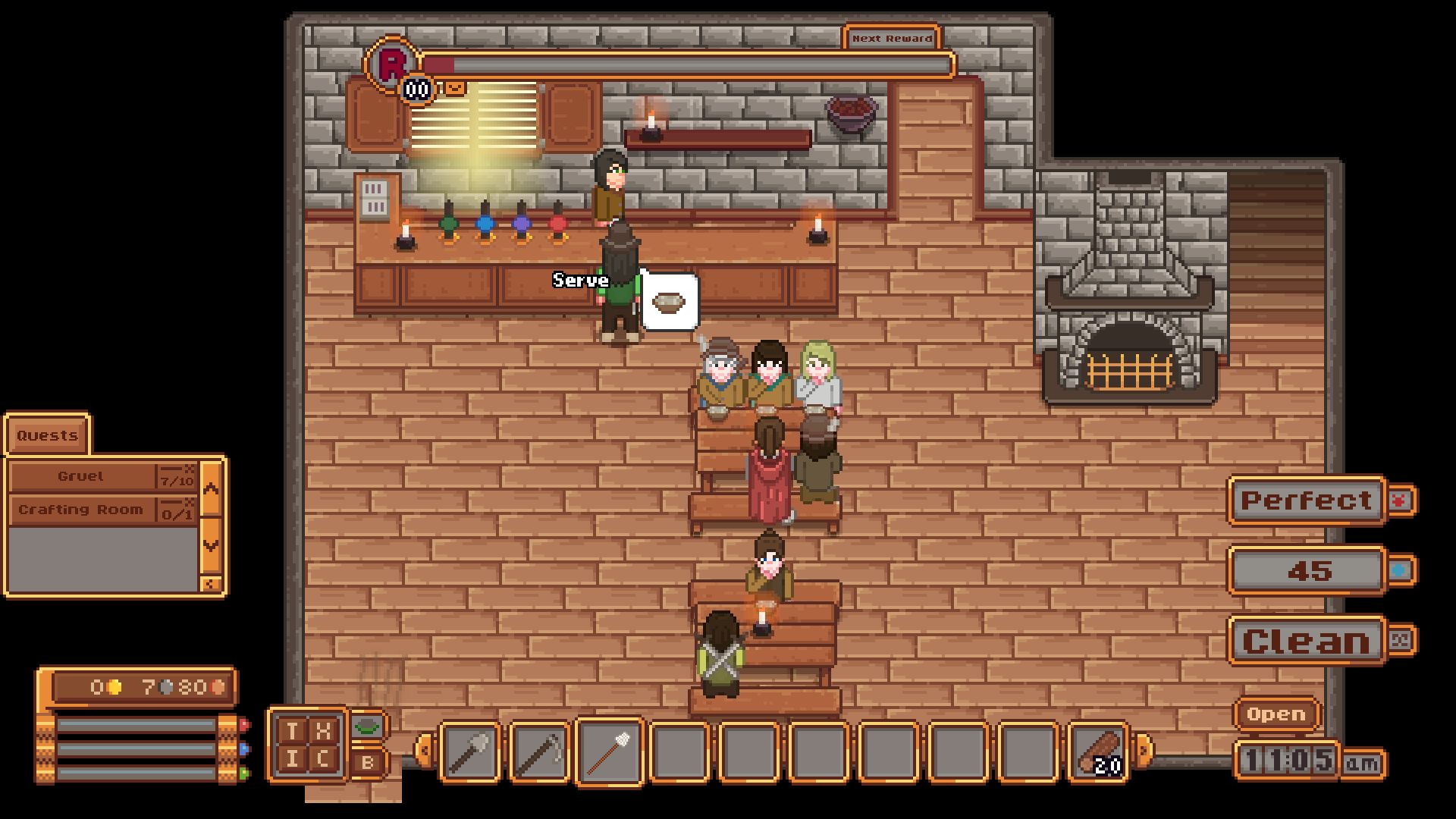 What is it? A life sim RPG where instead of being an adventurer you’re the one running the tavern they go to in between adventures.
Who’s it by? Louquo, Metaboli Publishing
When is it out? Mid 2020

I’m a fan of conceptual twists on the mighty hero story (like Moonlighter and whatnot) and Travellers Rest does that whilst also being a fun life management RPG. The demo is only two days worth of game, but you can see how much depth the full thing could have. You can make different foods and brew beers with different flavour profiles, depending on the ingredients you use. There’s a farm out the back where you can grow different hops and grains, you can hire staff, you can craft coasters to put on tables to reduce how often you need to wipe them down. If it gets too cold, you must stoke the fire, and if it gets to hot you must put it out. Anything to maintain a good rep in the community! Plus, I’m pretty sure you get a cat, and a pub that has a pub cat is an A+ pub. 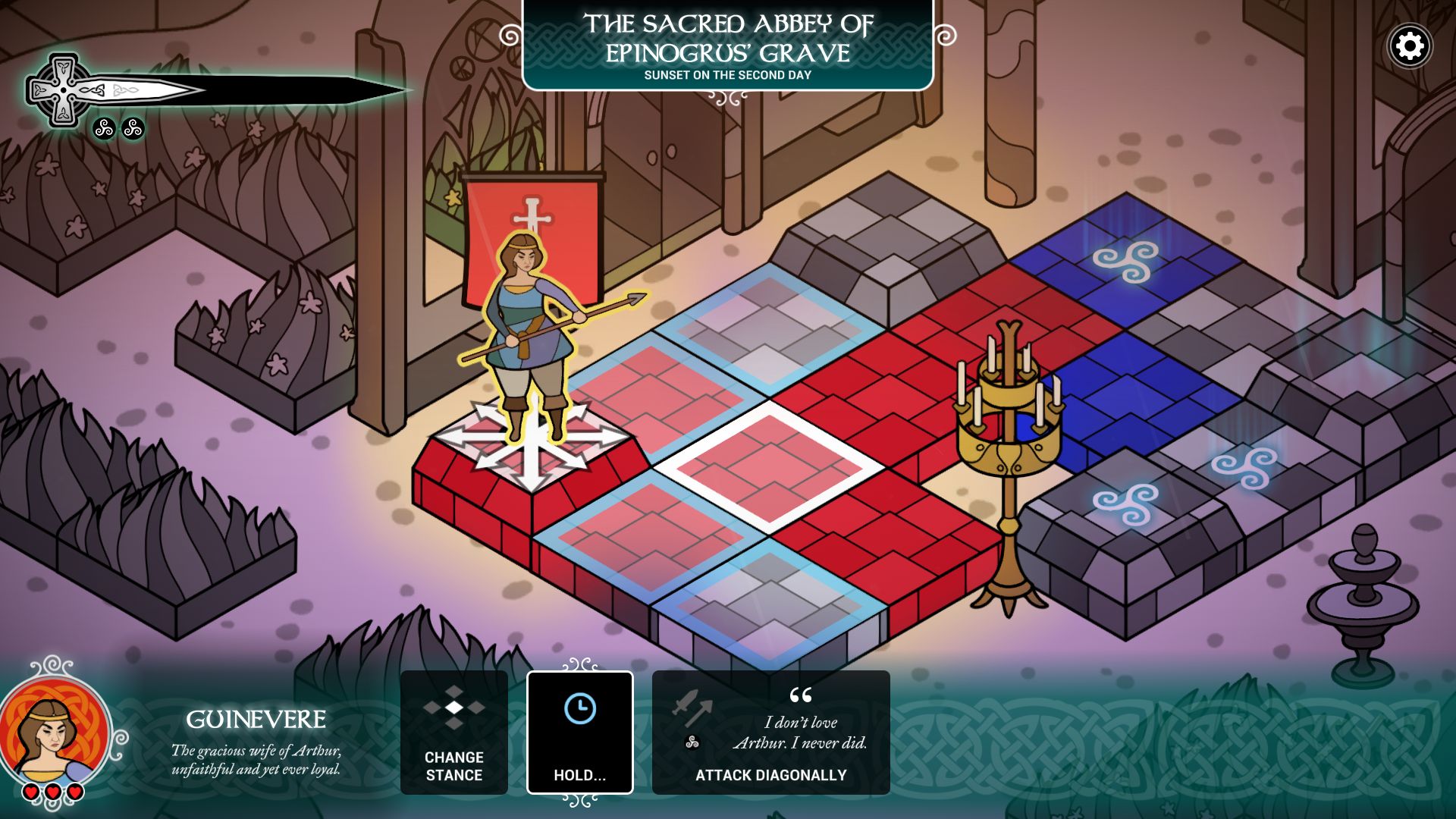 What is it? Arthurian RPG with a mix of grid tactics and story, where the fights tell more of the story and the story affects the fights.
Who’s it by? Inkle
When is it out? Summer 2020

I mean, when has Inkle done a game that isn’t a cool story driven thing? In the demo you can start as either Guinevere or Lancelot, on a quest to save King Arthur from the grim and traitorous Mordred. Each map is an area of squares that you and your opponents (if any) take turns to navigate. You can change stance to move diagonally, cover more ground by rushing in a straight line, move freely from higher ground, and so on. It’s a surprisingly tactical dance that demands careful thought, but at the same time, actions you take during these rounds can affect the story.

As Lancelot, I decided not to attack a group of villagers who were afraid and threatening me, choosing instead to move around them. But I could have tried to attack. That could have changed Lancelot’s story, and thus changed his ability. As Guinevere I decided that I didn’t love Arthur, but would still help him – and that gave me the ability to attack on the diagonal. Pendragon is therefore a pleasingly holistic game, and I hope that one of the blacked out character portraits in the start menu is Mordred himself. Fun to be bad, innit?

Get the free Pendragon demo here. 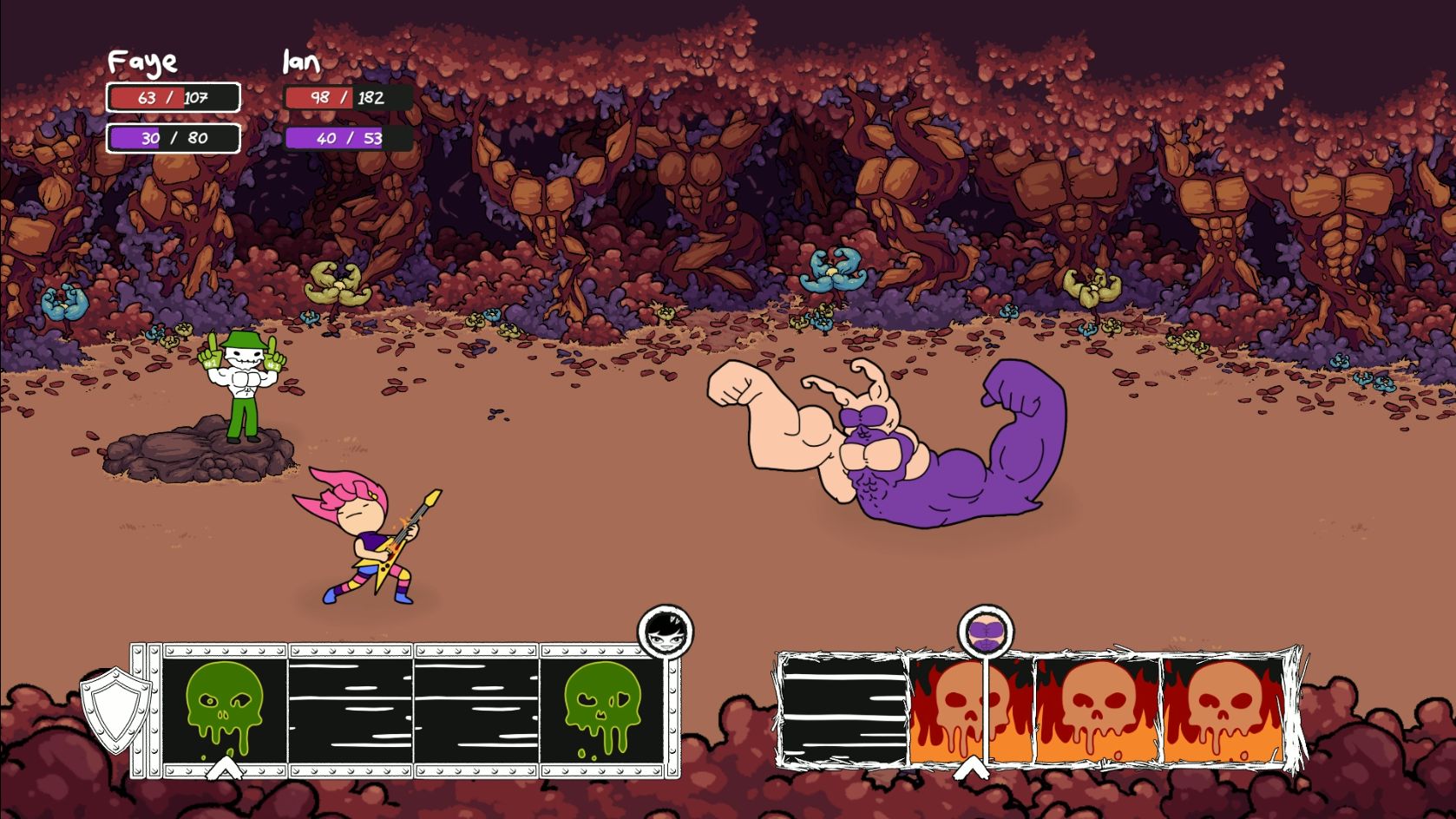 Deathbulge: Battle Of The Bands

What is it? Genuinely funny tactical RPG with squad combat where your squad is a band and you are in a battle of the bands to the death.
Who’s it by? Deathbulge, Five Houses
When is it out? 2021

I do not say a game is genuinely funny lightly, because most of the time they are not, and yet Deathbulge is. I think it’s because it’s not trying too hard. Our hero, Faye, a lead guitarist with pink hair shaped like a Flying V, is in the Tone Wood (a forest of extremely ripped trees) to find bassist Ian. Ian is a really hench skeleton, I think, who like fish. Faye signed them up for a battle of the bands but found out too late it was a cursed competition. Now the fight is one to the death.

The combat is a sort of combination of real-time and turn based, in that your turn comes up when your icon moves to the end of your on screen fretboard. You can use abilities to add status effects to the enemy fretboard, or buff your own, and can swap to one of your bandmates at any time. Your attacks are, obviously, musical – a really fast solo, a really low note, that kind of thing. The theme is carried admirably by e.g. health potions being “merch”, but in the demo at least nobody was trying too hard to make jokes about metal bands or whatever (although there was one good bit where a keyboard player said he was there to give demos, but the demo wasn’t available in the demo and for the demo you’d have to get the full game, followed by about half a screen of HA HA HA HAs). Also I loved the enemy design. The boss battle near the end was with a giant snail made of fists.

Get the free Deathbulge demo here.

Deathbulge: Battle Of The Bands

The Dungeon Of Naheulbeuk: The Amulet Of Chaos

Backbone: Prologue is a free and classy bit of animal detective adventure