Since the Steam Game Festival: Summer Edition has so many demos in it, we’ve all run off to harvest our own little crop to recommend, picking different genres as our guiding principle.

As ever, though, the concept of “genre” has tripped me up like a rake in the dark, and left me flailing to define what connects the six games below. I guess, if there’s a unifying concept, it’s plopping buildings down. Although whether you do that from the top or the side, and whether you use those buildings to create resources, to make little fightoes to attack other buildings with, or to do a bit of both, varies from game to game. Altogether, if you like to wolf down big plates of base-building, with optional side orders of logistics and violence, there’s going to be something in this pack of treasures for you. 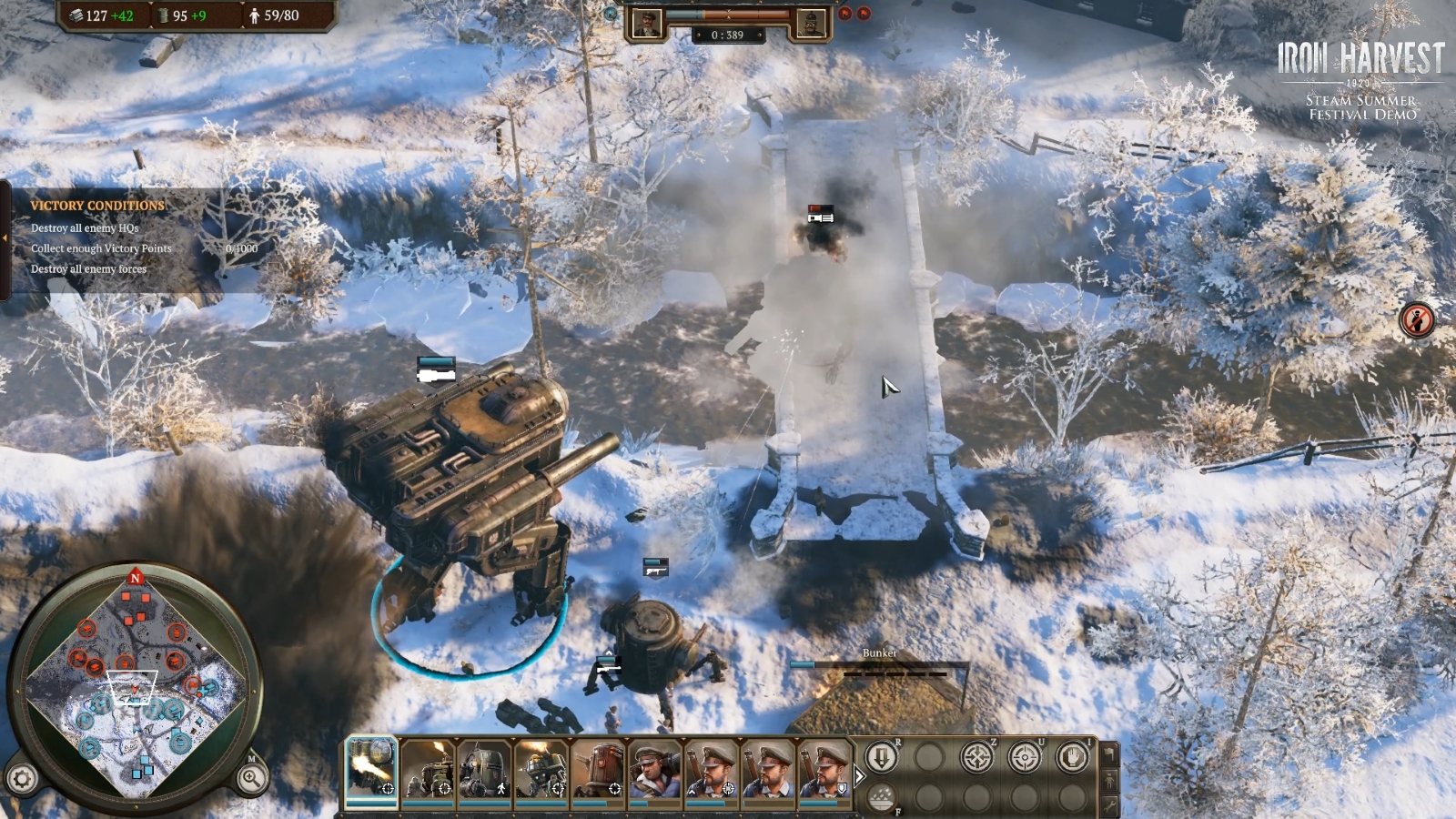 I wish I could screenshot the clanks.

What is it? Classic RTS action with an utterly brutal, dieselpunk WW1 aesthetic, and huge chuggy mechs.
Who’s it by? KING Art, Deep Silver
When is it out? 1 September 2020

I’ve been really excited for Iron Harvest, as I’ve long been blown away by the art of Jakub Rozalski – his scenes of Eastern European agricultural life at the turn of the 20th century, but with MASSIVE CHUFFING WAR MECHA IN THE BACKGROUND, are a thing to behold, and the notion of a game inspired by them (there’s already a board game, called Scythe), was a welcome one indeed.

And by my beard, this demo blew me away. For a start, it has utterly nailed the Rozalski aesthetic. The ultra-bleak, snow-dusted misery of mechanised imperial conflict, and the huge, dirty, smoke-belching mechs are spot on. They even chug and clank and foghorn just like they should. But above and beyond that, it’s an absolute belter of an RTS. It plays a little like the original Dawn Of War, with relatively small army sizes and limited base-building, and has you focus on seizing and controlling strategic points, as well as nodes that generate the game’s two resources, steel and oil. It’s challenging, but not hectic: even basic infantry units can take a while to wipe each other out, and your building-sized industrial colossi can take a hell of a pounding before getting knocked down, in epic, minutes-long exchanges of artillery fire.

Honestly, play this, if you’ve got any love for the genre or the art style. September can’t come soon enough. 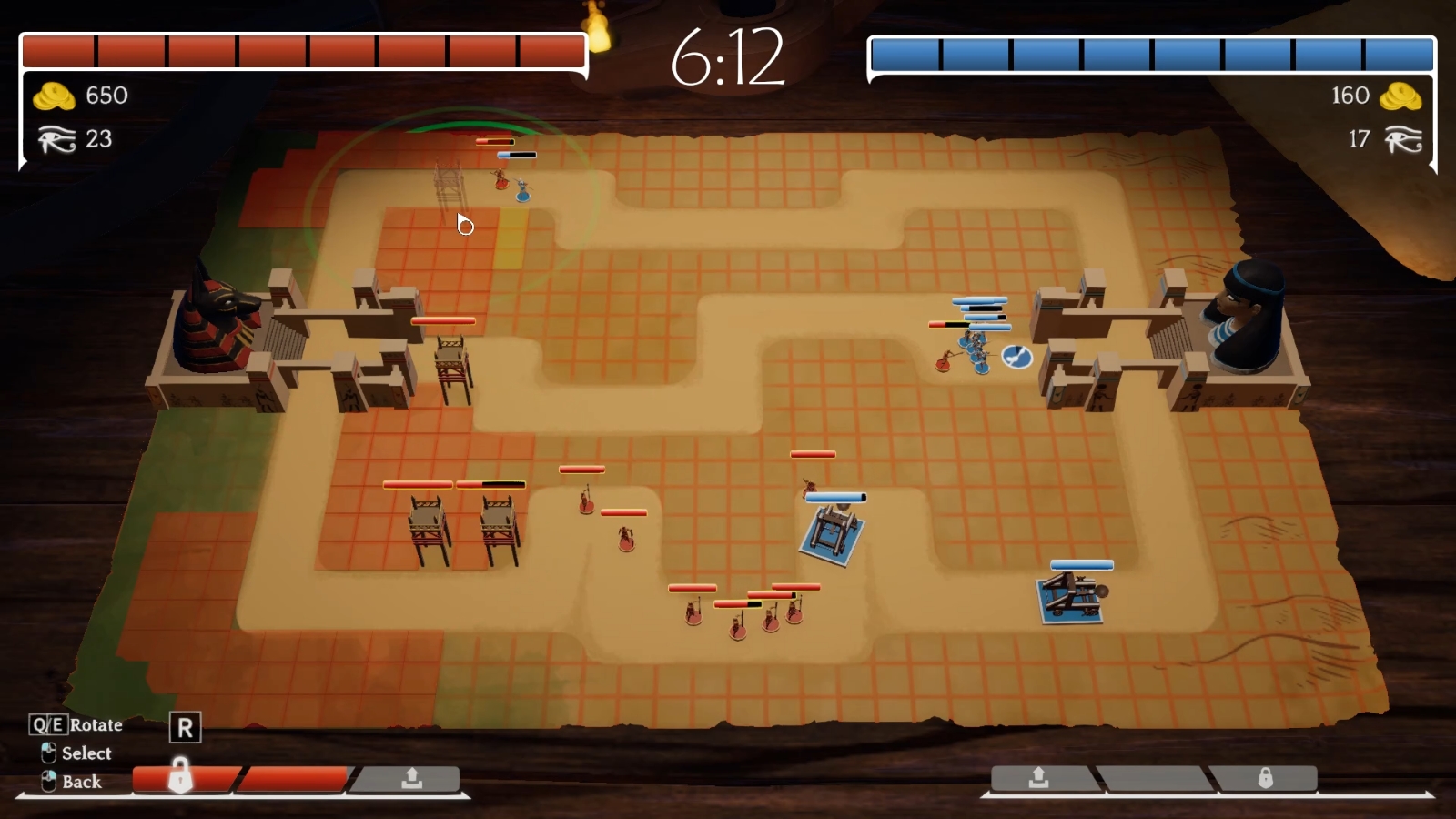 Ra has so many sons. Hundreds of ’em, born with spears in their hands and desperate to rush headlong at an enemy fortress.

What is it? Fast-paced, competitive Ancient Egyptian tower defence.
Who’s it by? Pharaoh Hound Games
When is it out? July 2020

This is a simple one, but a charming one. I’m not the biggest fan of tower defence games, but I’m well into Ancient Egypt, so I decided to give Sons Of Ra a go on the strength of its theme. I figured I’d have a couple of goes, but ended up playing for an hour and a half, even though I suspect it’s designed for 1v1 multiplayer, and so the AI isn’t up to much, even on hard mode. The game plays very simply, and not unpredictably: you have a little base (set up on a board designed to resemble popular Egyptian board game Senet), and two or three lanes by which your brutes can scamper towards the enemy, and vice verse. You can put up towers by the lanes, and unlock archers, shieldbearers and the like to accompany your spearmen as you rack up more kills. Catapults can take out towers, but are defenceless against mans.

But you’re also playing as a god, see (there’s a selection available, although good ol’ birdface Ra was obviously my main dude). And because you’re a god, you’ve got a second currency – Heka, I guess? – accumulating alongside the gold with which you buy troops. Using this spiritual power, you can smite enemy towers, buff your troops, or do other cool, god-specific stuff. Anubis, for example, can create necromancery priests who resurrect dead enemies as mummies who turn around and wade back towards their home base. As I say, it’s simple stuff, and nothing that’s not been seen before in the genre, but if you like a bit of lane-based slaughter, with a classy archaeological theme, Sons Of Ra is well worth a punt.

Get the free Sons Of Ra demo here. 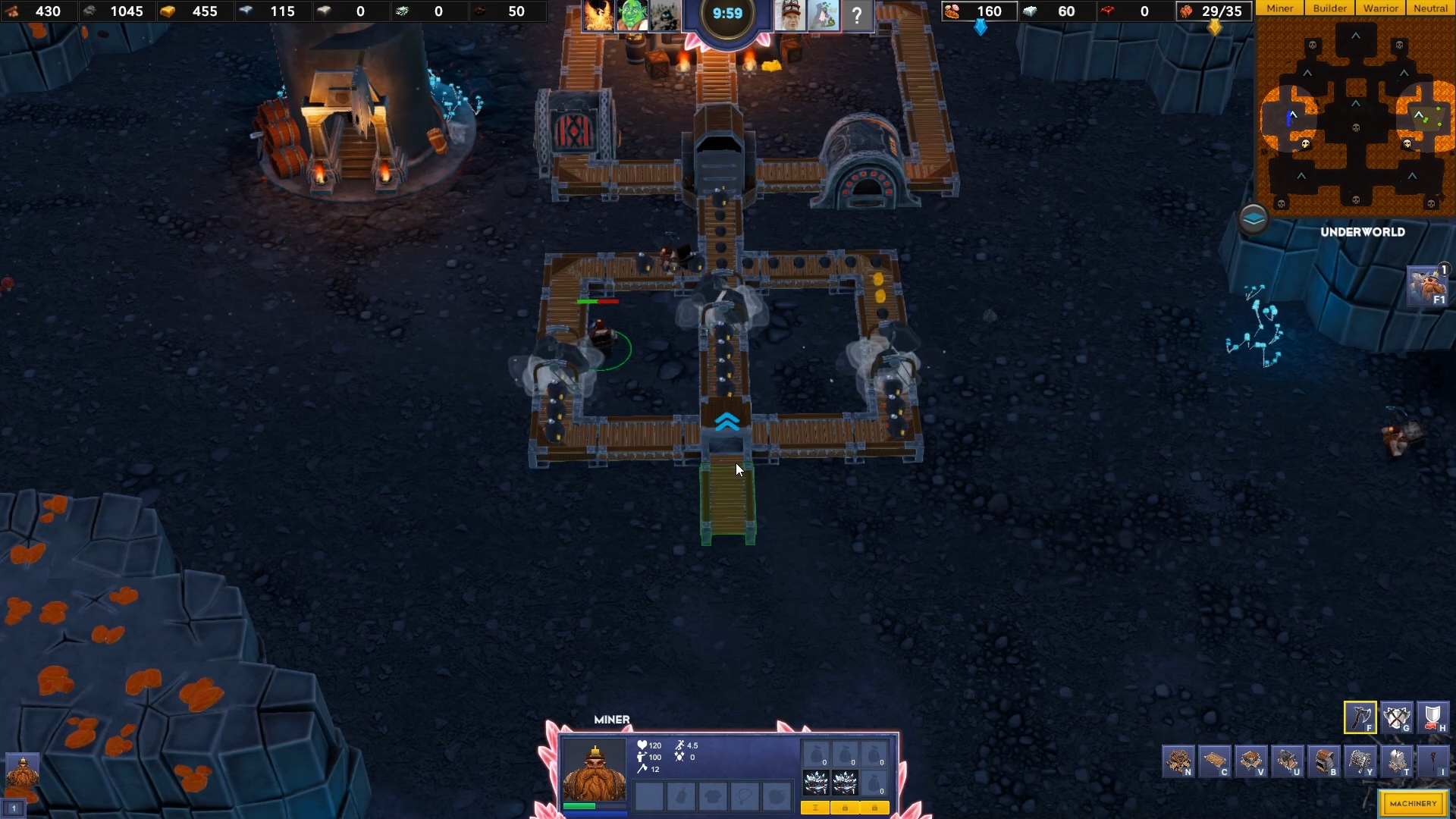 We heard you liked strategy games, so we put Factorio in your AoE2 so you can Factorio while you AoE2.

What is it? A co-op RTS where teams of three players take on different roles to run a dwarven war machine.
Who’s it by? Pineleaf Studio, Merge Games
When is it out? Autumn 2020

I did a bit of a double take when I saw the trailer for Dwarfheim last week. It looked like a painfully generic RTS about Scottish dwarves, until I noticed it involved asymmetric co-op play, where each side is controlled by three players with wildly different sets of things to do. There’s an overworld player who does things like farming, woodcutting and basebuilding, an underworld player who mines ores and processes them into resources via a sort of Factorio-lite production line mechanic, and a military player who takes care of defending both players, and attacking the enemy.

I figured Dwarfheim could be stellar if it actually pulled this idea off, and… well, it is! I played a few sessions with the dev team earlier this week, and was impressed by just how differently each role played out, and how there was more than enough to do in each to keep anyone but the most electric-nerved APM lord fully occupied. As I’d hoped, there was also a really satisfying metagame, about arguing with your team mates over who used all the wood, when the steel’s going to be ready, and so on. Admittedly, the game still looks a little rough around the edges, and is lacking a bit of heft in terms of how things feel to click on, if that makes any sense – the 3D models all feel a little weightless, still. But there’s still plenty of time to get that right, and the core concept is certainly as robust as I had dared to hope it might be.

Please note, the demo included in the summer festival doesn’t actually support multiplayer play, unfortunately. However, Pineleaf Studio are about to bring the game into open beta, which you can sign up for on Dwarfheim’s discord.

Get the free Dwarfheim demo here. 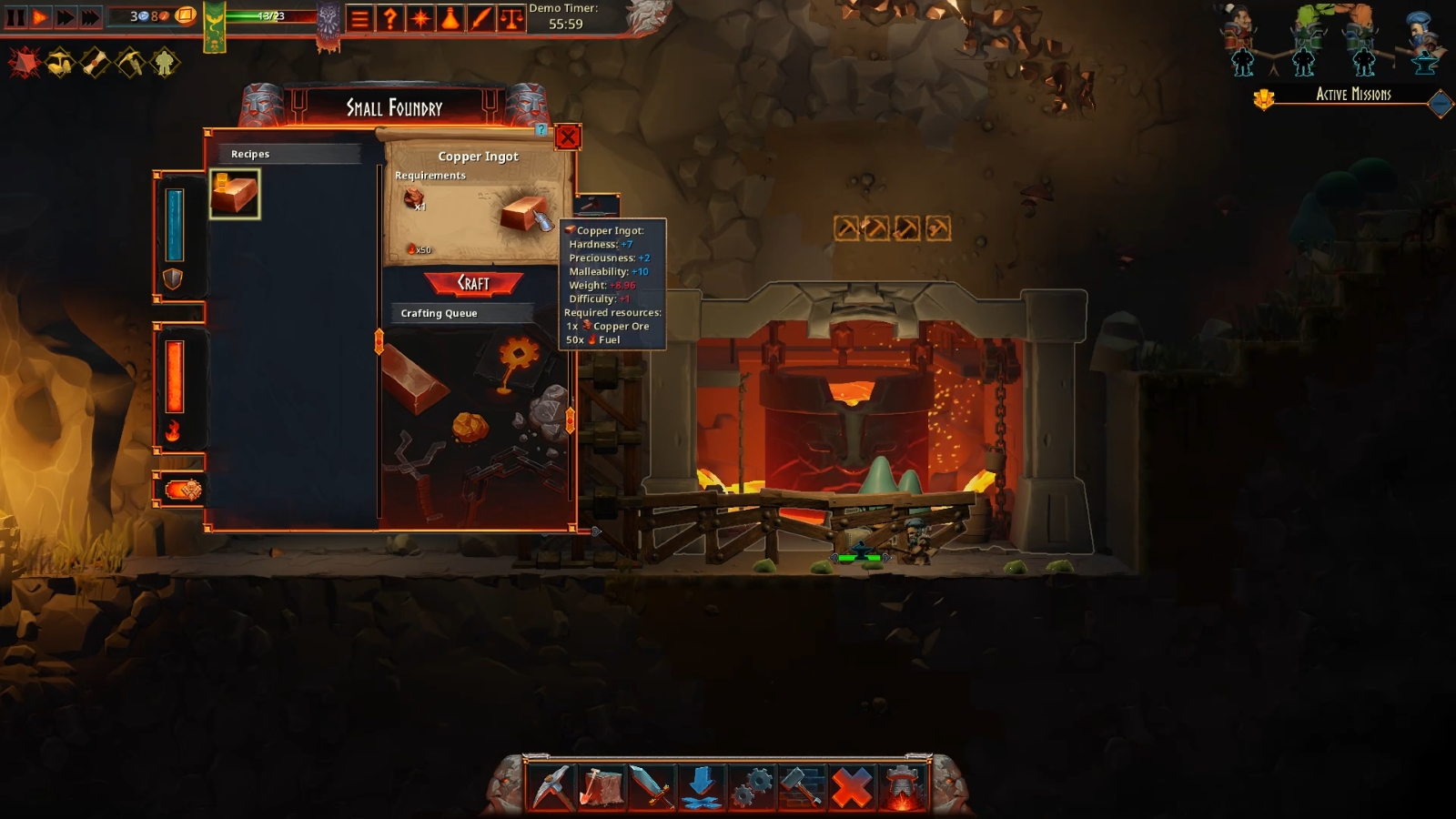 I do love a nice warm forge glow effect.

What is it? Side-on dwarven colony manager with gorgeous lighting effects, parallax pleasantry and hints of Oxygen Not Included.
Who’s it by? Warpzone Studios, Team 17
When is it out? “2020”

From dwarves, to… erm, more dwarves, Hammerting is a vertically-oriented colony manager (think Oxygen Not Included, but with beards), that I got pretty excited by last year. Hammerting is still far, far from finished, but I’m well impressed by how good it’s looking already. The procedurally generated mountain your dwarves are carving out their home in feels like a big, dark, echoey, dripping place with all the right Khazad-dûm vibes. I’m also a huge fan of the parallax effects used to give the 2D world the illusion of depth – when one of your dwarves heads into a forge to do some hammering of tings, they wander into the background to work an anvil, and as you pan the camera past, it really seems as if they’re in a room just further back from the wall it actually occupies. Shrewd stuff.

There were some enticing hints of what’s to come in the main game, such as regular bulletins on the progress of a great war raging in the overworld. From what I learned from talking with the developers, it seems as if your dwarves will be arms dealers to that war, rather than actual combatants, but personally I think that’s way more intriguing. Since the demo was limited to an hour of play time, I didn’t get the chance to delve too deep into Hammerting, but it’s got all the style I’d want from a mountainhome construction game, and promises plenty of the substance too.

Get the free Hammerting demo here. 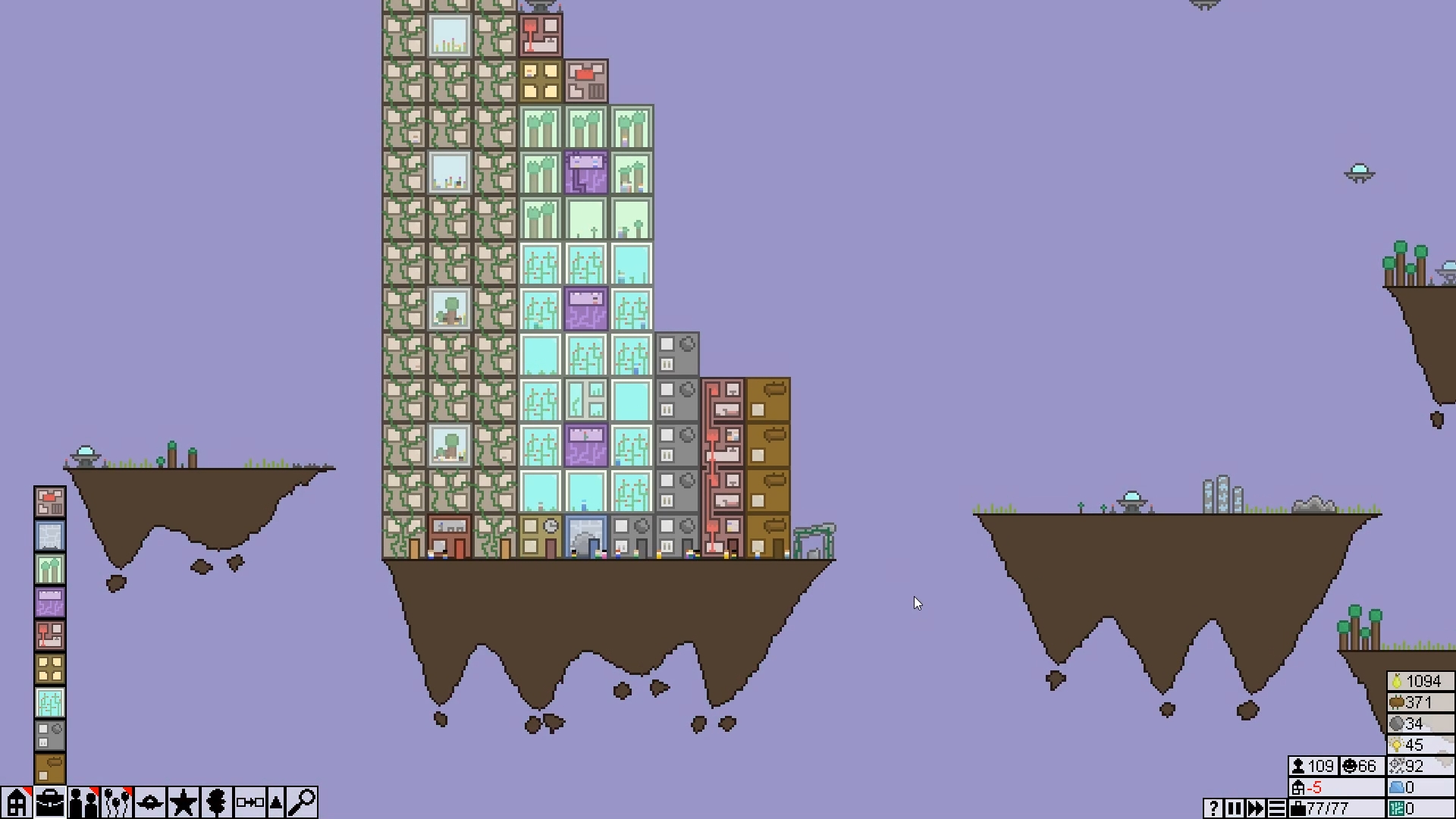 Building castles in the sky.

What is it? A vertical, pixelly sci-fi citybuilder with lots of resource management and unexpected early 2000s flash game energy.
Who’s it by? Florien Van Strien
When is it out? “2020”

Well, The Final Earth can’t have been that final if it got a sequel, can it? Nevertheless, I enjoyed this cute, subdued, pixelly little city builder, which plays out in classic ant farm fashion. The game takes the form of a series of scenarios, where you generally begin on a little floating island, with access to a few scraps of wood and stone. As little dot-sized humans are dumped on your head demanding housing, you have to make them a city out of perfect squares, keeping a close eye on your flow of resources as the towers stack up. It seemed at first like it might be a little sterile and unlovable, and I spent a little longer than I wanted to waiting for resource totals to tick up far enough to be able to afford the things I needed, but when I found I’d been playing three hours, it became apparent that I’d really warmed to the Final Earth 2. It’s certainly a game to relax with, which is a commodity worth its weight in gold right now.

Get the free The Final Earth 2 demo here. 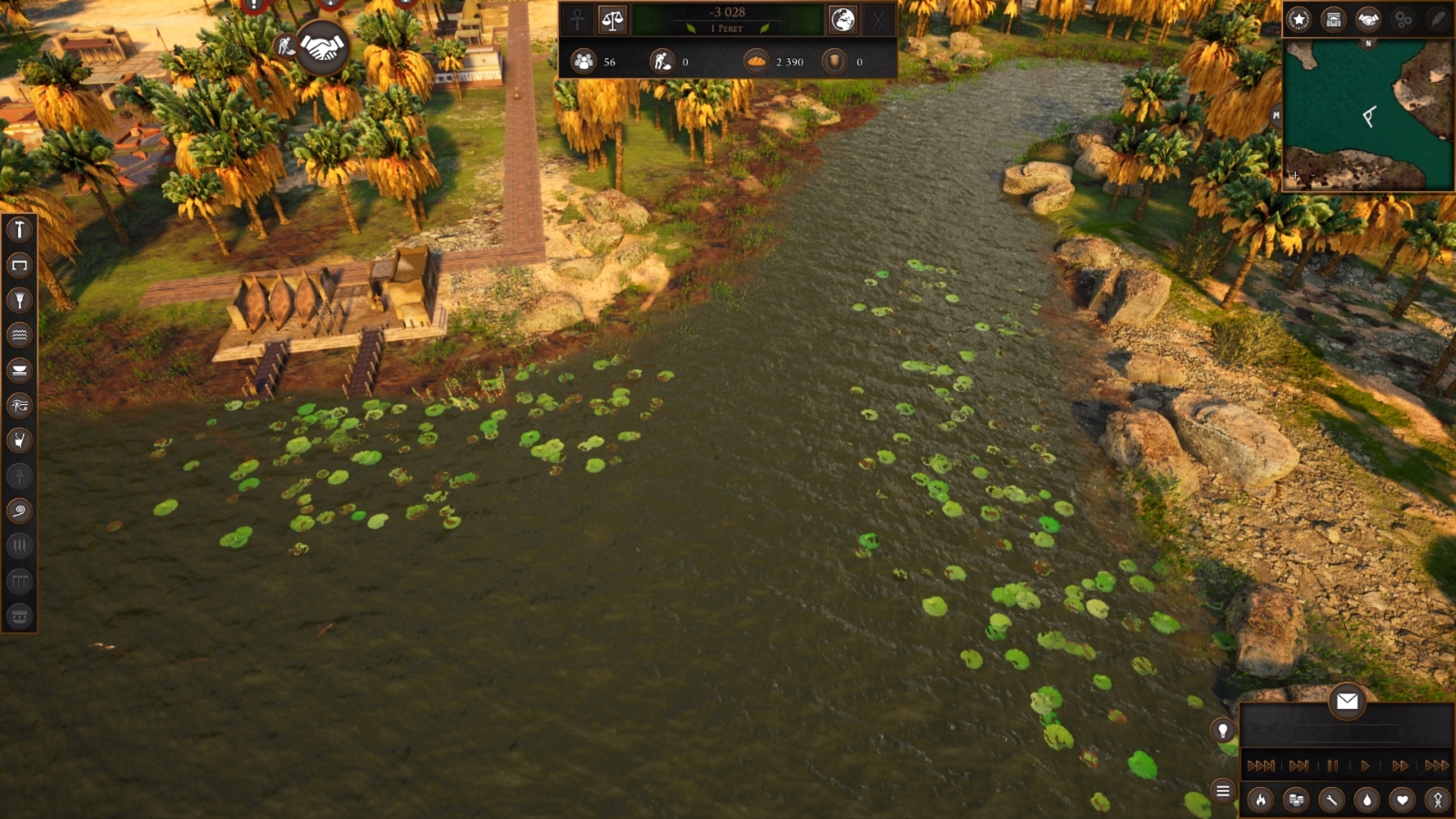 I’d love if this whole thing was a giant bait and switch, and the full game was just an incredibly depressing visual novel about the collapsing family life of two bricklayers in modern Cairo.

What is it? A modern take on the classic city builder Pharaoh, with nice-looking water lilies.
Who’s it by? Strategy Labs, PlayWay S.A., CreativeForge Games
When is it out? “Q1 2021”

I’ve not got a vast amount to say here, as I already covered this demo quite extensively when it came out, but it has returned for the Steam Fest, and is worth a shot if you were a fan of the classic city builder, Pharaoh. Who knows, the demo might have even been expanded since I played it – it certainly felt like it should have been a little more generous with content.

Get the free Builders Of Egypt demo here.

You come at the Pharoah, you best not miss

Co-op RTS DwarfHeim will launch in early access in October, and gets a new demo today

Is Dwarfheim spectacularly generic, or did it just casually reinvent the RTS?

AoE2 in the streets, Factorio in the sheets