The Oxford English Dictionary defines “strategy” as “any game that centres puzzle-solving or cerebral thought”. I’ve taken that surprisingly liberal definition, ran off to the Steam Summer Games Festival, and come back with an armful of videogames that vaguely fall under that umbrella. Some of them are definitely skirting the edges and getting their feet wet, but you should play them anyway. 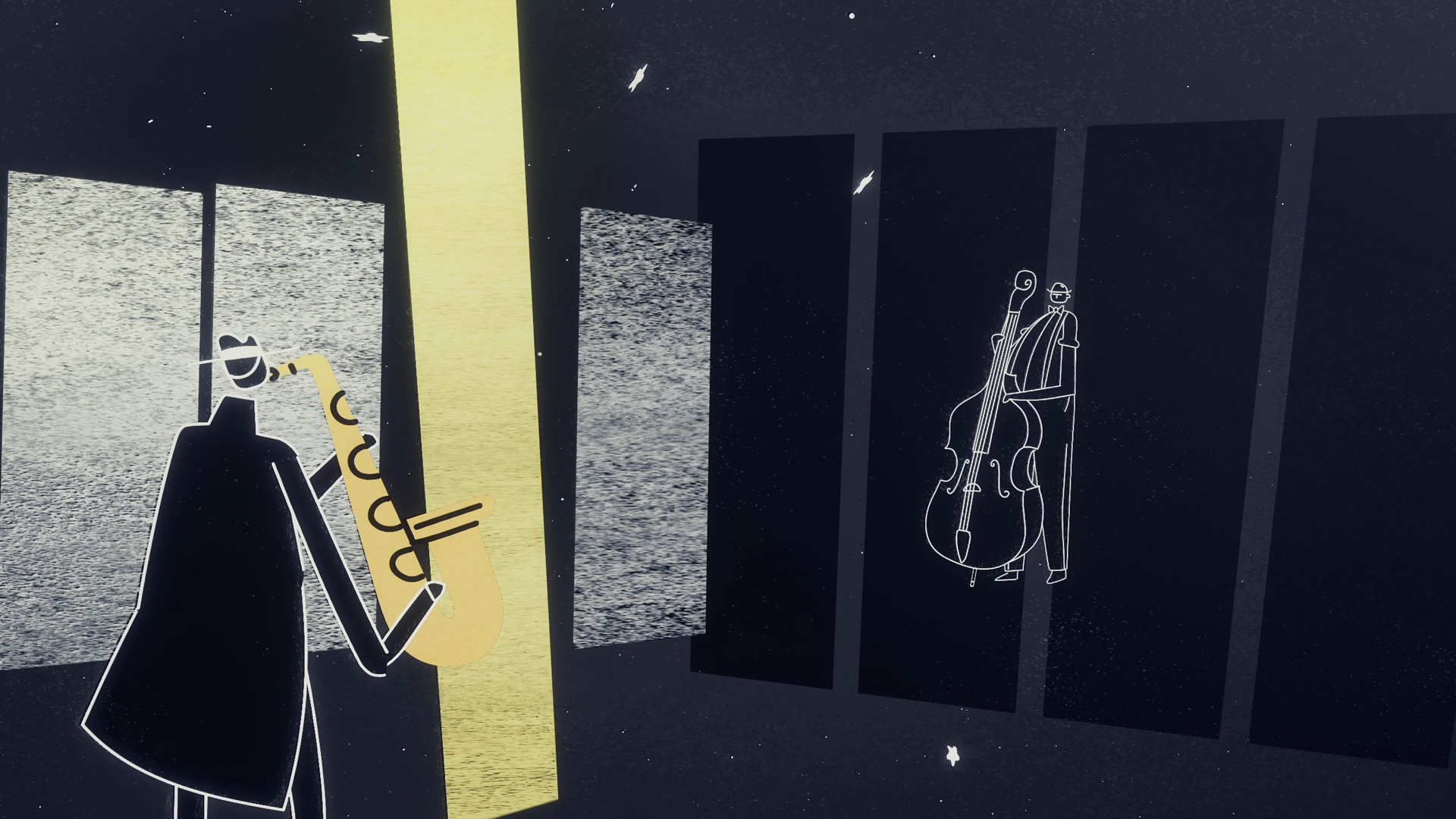 What is it?A point and click adventure game, but not like that.
Who’s it by? Feral Cat Den
When is it out? “Before, During and After the Big Bang”

Right, Genesis Noir isn’t a strategy game. Or a puzzle game. It’s not even an adventure game, as you’d normally understand one. But the demo is bloody good and if none of us had written about it RPS would probably have spontaneously combusted.

The demo is one long improvised jazz piece, pitched against a black and white kaleidoscope of urban comic strips. That might sound like a confusing oxymoron, but Genesis Noir doesn’t care, and nor should you.

You could probably call it magical realism, if you wanted. I don’t know if I do. It’s one of those things that suffers from being thought of in terms of other things. The demo starts with you tuning into the big bang’s background static and ends with you pocketing a cello from a street performer, following a duet where your saxophone melds with the fabric of the universe. The wider story is about jealous gods and a cosmic bullet, but here all that’s just a distant hum.

I won’t spoil anything else about it, because the joy (and it is joy) lies in not knowing what’s next. If the full game can sustain this for more than 15 minutes it will be phenomenal. 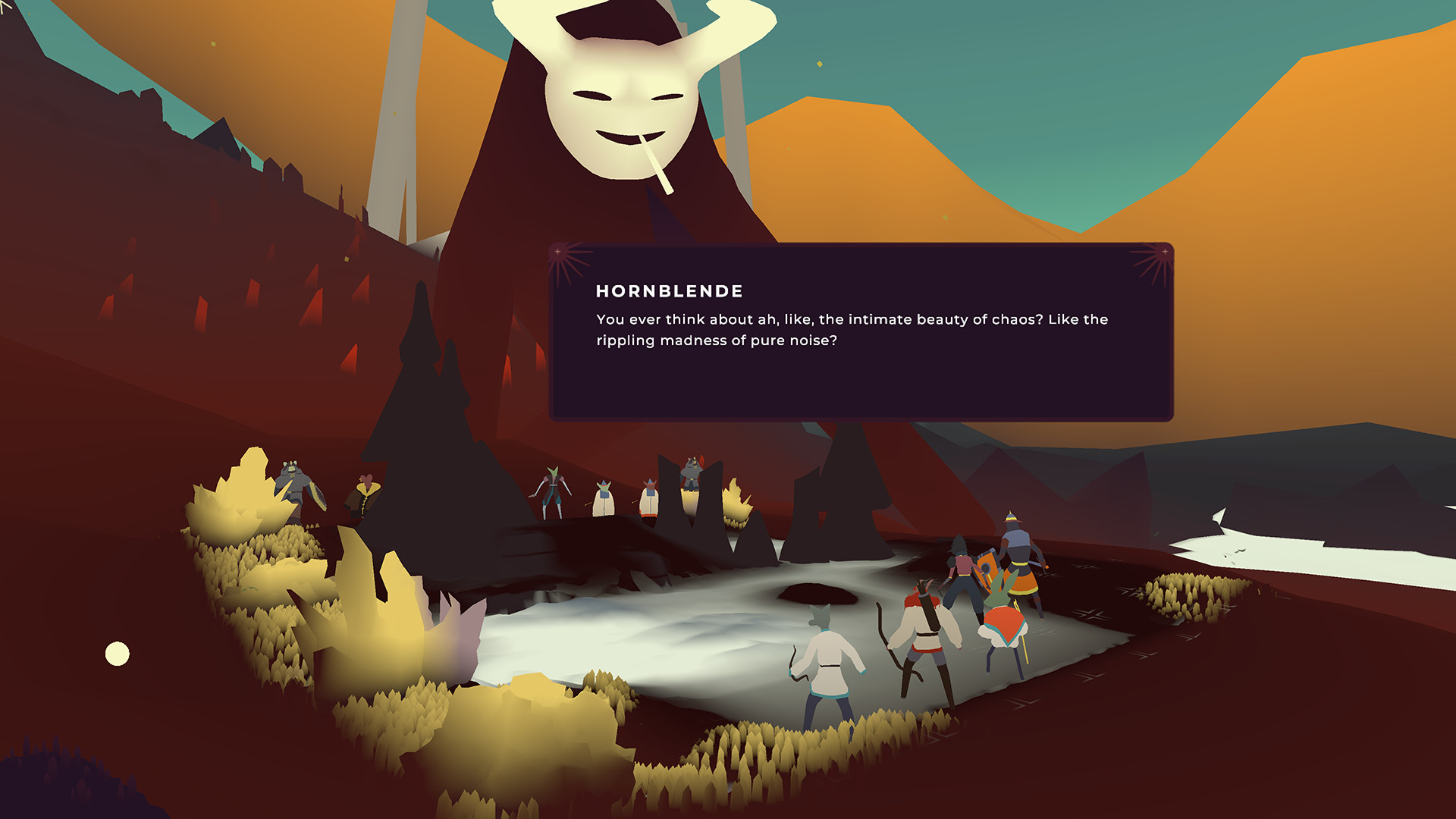 What is it? Turn-based tactics with pleasant roaming.
Who’s it by? Badru, Michael Bell, Zoe Vartanian, Isa Hutchinson, Madison Pathe, Taylor Thomas
When is it out? 2020

Matt: Tenderfoot Tactics is weeeeiirrrrd. You’re a roaming band of barely-introduced adventurers, out to win a tournament that plays a central role in a strange festival. Some of you are goblins.

You spend a lot of time roaming around, in a third person view where you can jump and everything. The landscape undulates around you while abstract pixel-figures chirp away about honour and forest spirits. It’s more than a little obtuse, in both looks and mechanics.

I like it despite that. It doesn’t look like much else I’ve played, and its world is dotted with humongous deities that view your mortal antics with bemusement. That’s a world I want to know more about.

I’m not completely sold on the tactics part of Tenderfoot Tactics, but I’d still call it promising. You go into separate battles where you move your party around a grid, fussing over positioning. There’s a huge emphasis on attacking units from behind or the side, as that knocks them back in the turn order. I think there’s a danger that could funnel strategies through the same simplistic process I didn’t like about XCOPs, where what you need to do is too obvious – but I’ve only got into some basic scraps so far and it’s far too early to say.

Weirdness goes a long way, for me, and if you like the look of this then you should definitely jump in so you can see it in motion. May the spirit favour your blades. 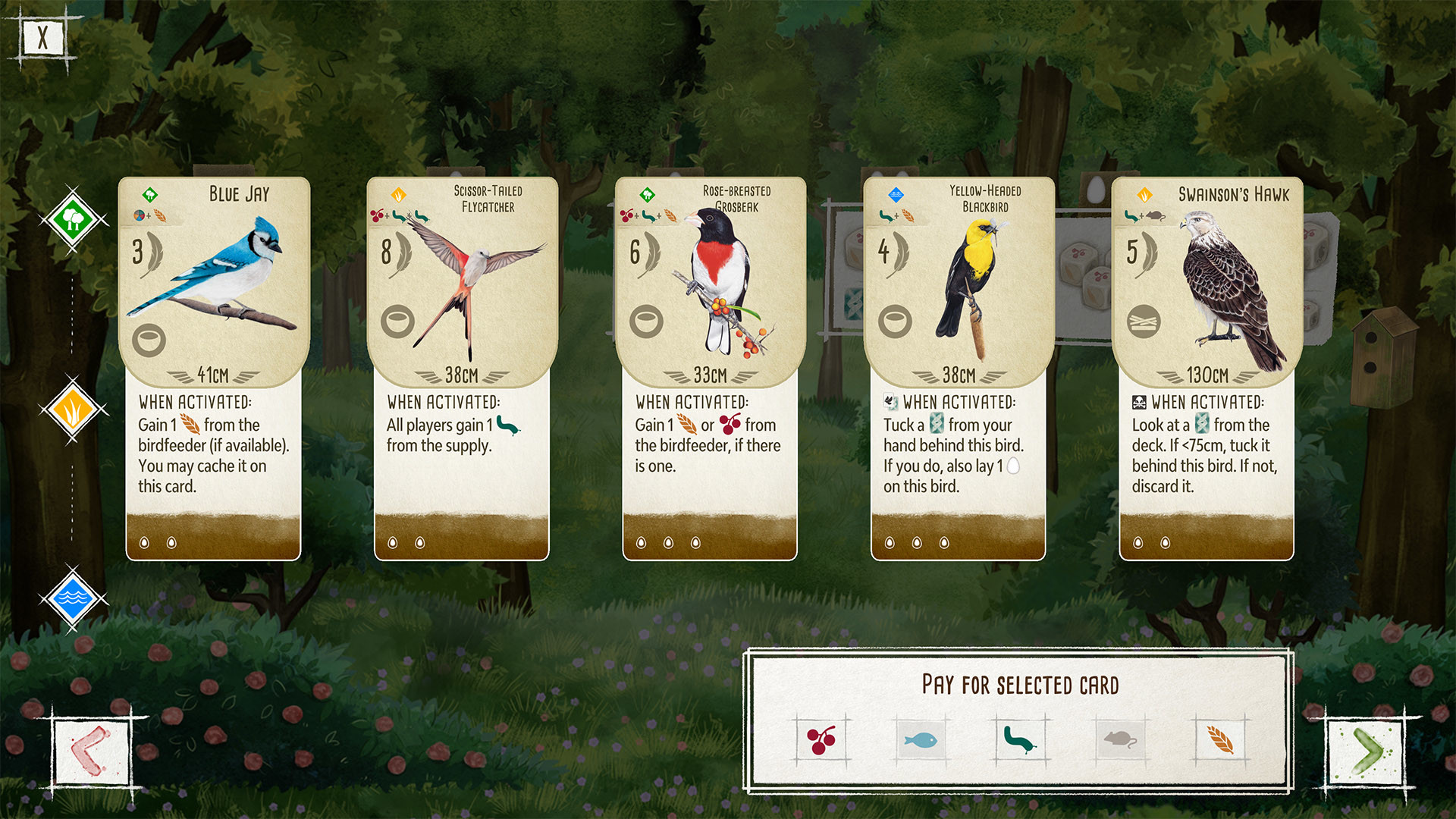 What is it? A digital board game about good birds.
Who’s it by? Monster Couch
When is it out? Summer 2020

Matt: Engine-building games are ace. I’m not talking about your Factorios or your Satisfactories, though they do tap into something similar. Engine-builders are a genre of board game where you start with nothing and wind up with a beautiful, point-spewing machine, cobbled together through a blend of long-term thinking and canny opportunism. In cardboard form, Wingspan is one of the best. It’s won awards and all.

You’ll want to play birds. These give you victory points, but more importantly, abilities. Maybe you’ll get some extra food when another player takes a certain action, or get to draw a card for free. You’ll also want eggs, because they’re both victory points and upgrade currency. And you’ll want to draw cards, so you can play those birds in the first place.

Playing well is about weaving a path through those three basic choices, adapting as each option gets souped up with your abilities. It’s good at giving players multiple paths to victory, and focusing people’s efforts on bonus points that foster direct competition.

Wingspan isn’t about fierce bird on bird action, though. It’s mostly about sitting back and tinkering with your nests, while sipping a cup of tea and listening to the nice music. This is a real good digi-fying of a real good game.

Get the free Wingspan demo here.

What is it? A cute puzzler about helping a monster go island hopping
Who’s it by? Draknek & Friends
When is it out? 2020

Matt:
One of the best things about A Monster’s Expedition is the undo noise. You’re trying to guide a an adorable (yet featureless) egg monster between islands, and you do this by pushing down trees to make bridges. It’s all about turning the space around in your head so the log lines up right, and this will inevitably go wrong.

That’s fine. The undo button comes with the clash of a symbol, subliming your mistakes into part of the performance. It’s a little touch that does a lot, just like most every interaction on your expedition. It’s all so simple, so far, but also so considered. That extends to the world, too, which is built up by occasional plaques that reveal you’re touring a museum of humans made by monsters.

That’s pretty neat, but the actual best thing about A Monster’s Expedition is the way you can get your backpack-wearing egg monster to sit down on the coast and waggle his legs around, then watch as the camera slowly pans back and the guitar twiddling ramps up. It’s charming. I’m charmed.

Disclaimer: Phillippa Warr (RPS in peace) did the writing, and you can tell. 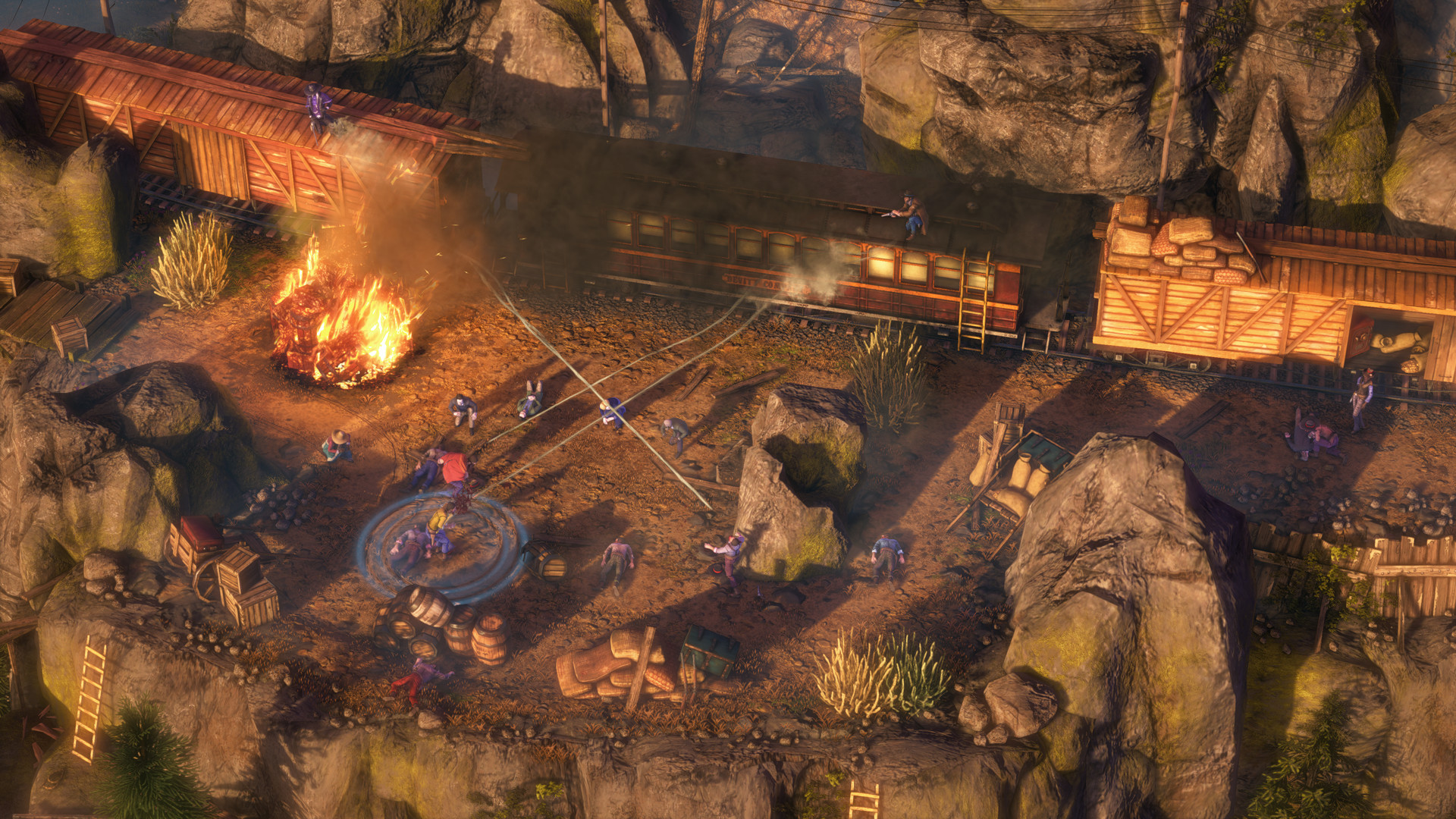 What is it? Real-time murder tactics with cowboys, this time
Who’s it by? Mimimi Games
When is it out? Now!

Matt: I don’t think this is strictly part of the festival, as it’s for a game that’s already out and the demo won’t disappear in a week like the others. I’d still feel silly if I didn’t include it, though, because it’s fab.

If you’ve played Mimimi’s last game, Shadow Tactics, you already know how to play Desperados 3. You control a gang of murderous cowboys, and have them slink about the shadows while manipulating guards with special abilities. It’s all about coaxing groups into vulnerable positions, messing with sightlines and distractions, before pouncing in synchronised concert orchestrated by Showdown Mode.

Showdown Mode is like the last game’s Shadow Mode, but better. It fully pauses time while the last game only deigned to slow it down, which means your plans can get elaborate. Maybe you’ll start by chucking out a fake doctor’s bag, luring in one guard for a blinding and a beating. That won’t work unless the guard behind him gets a knife to the face, though, and THAT won’t work unless you do something to fluster another incoming patrol. That’s where the pause button comes in – and your guns, for when the going gets really tough.

All this adds up to an exciting evolution of a game I already adored. I wanted more Shadow Tactics. From what I’ve played of Desperados III so far, I’d say I got something even better.

A Monster's Expedition sets off on its chill puzzle romp today

A Monster's Expedition sets off on a puzzling adventure next week