Battle Brothers is a very difficult tactical game about managing a mercenary company.

So of course I hired the beggars. I hired the “cripples”, the falsely accused servants, and the oddballs. I gave them decent food and a place to belong. Sure they’d all die horribly, etched with debilitating and ever-mounting physical and emotional scars, mangled and torn by blades and bludgeons, screaming themselves awake from the horror of killing for a living. But until then they were heroes.

Crap heroes, for the most part, admittedly. But still.

Ejnar was the very first crippled man I hired. He was happy to stay out of battles. In game terms he was a drain on money and food, but I pictured him being good company and helpful around the camp. I didn’t know that, when one of my less hopeless fighters took a permanent disabling injury, Ejnar would come to him in a quiet moment on the road, and comfort him, easing the trauma he’d suffered. Ironically, Ejnar was later pushed onto the fighting lines in desperation, and eventually proved one of the best warriors in the company.

I hire all the feeblest, cheapest fighters I can. The desperate and the downtrodden. My unofficial battle leader is Hilmar, a former jester. He frequently instigates antics when we’re in a town or at camping, doing increasingly dangerous and unnecessary stunts, just daring death to take him while the game repeatedly asks me if I’m going to step in. I do not. He is Hilmar. He fights on the front line, still wearing the jester hat he came to us with. Almost any other form of headwear would offer more protection and be more appropriate for a normal mercenary company. But every time someone bashes Hilmar, the hat jingles, and he survives again, against the odds. He will die one day, probably from a single blow to the head. I will never take his hat.

I also recruited Hanke, a confused wild man who staggers out of the woods one day. When we visited a town a few weeks later, he offered a special option for a random event, in which a merchant had captured another feral forest man, and was dragging him around in a cage to sell as a spectacle. We offered to “help” the merchant get his victim to behave. We let him out of the cage and the pair of them tore the merchant limb from limb. Now we have two wild men, and a dog and falcon the merchant was also mistreating. 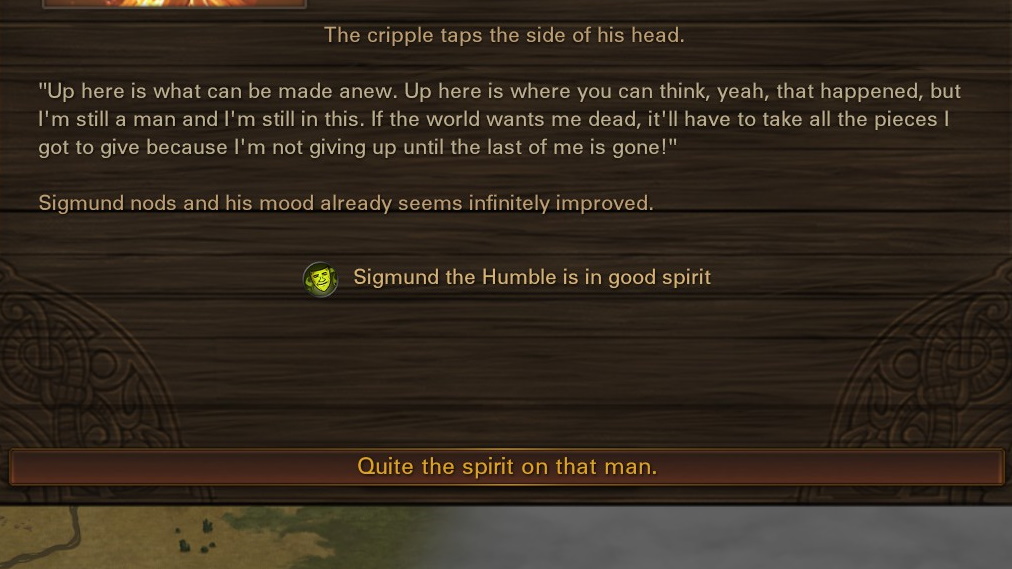 I would disband the company before I’d kick him out.

The Green Gulls are not the greatest warriors. But they are brothers.

Tagged with feature, Have You Played, Overhype Studios, Battle Brothers.