It’s the little details that really make a gaming PC special. Sure, the newly-unveiled 2020 refresh of Acer’s Predator Orion 9000 mega desktop might have one of Intel’s Core i9 Extreme Edition CPUS and two Nvidia GeForce RTX 2080 Ti graphics cards SLI-ed together for maximum gaming frames, but it’s those dinky little trolley wheels on the back of its chassis that really caught my eye in their Acer Next livestream this afternoon, so much so that I think every PC case from here on out should come with wheels as standard. Who’s with me?

I mean, yes, no one in their right mind will ever need wheels on their desktop PC. What do Acer think we’re going to do with them? Wheel the entire thing over to a socially-distanced LAN party at your mate’s house? It’s unlikely, to say the least.

Still, there’s something about this 2700€ mega PC on wheels that I just can’t bring myself to hate. Just think how easy it would be to wheel it out and do a bit of dusting behind your desk the next time you were doing a bit of cleaning, or the speed with which you could chop and change different USB devices without having to get a torch out to see whether the port you’re mashing into oblivion is, in fact, a USB port and not a rogue Ethernet port or display output. These are the kind of mundane, quality of life bonuses I dream about when building a new PC, and I’m not joking, I really do wish I could graft a pair of wheels onto my own PC to turn it into poor, makeshift cousin of Acer’s Orion 9000. 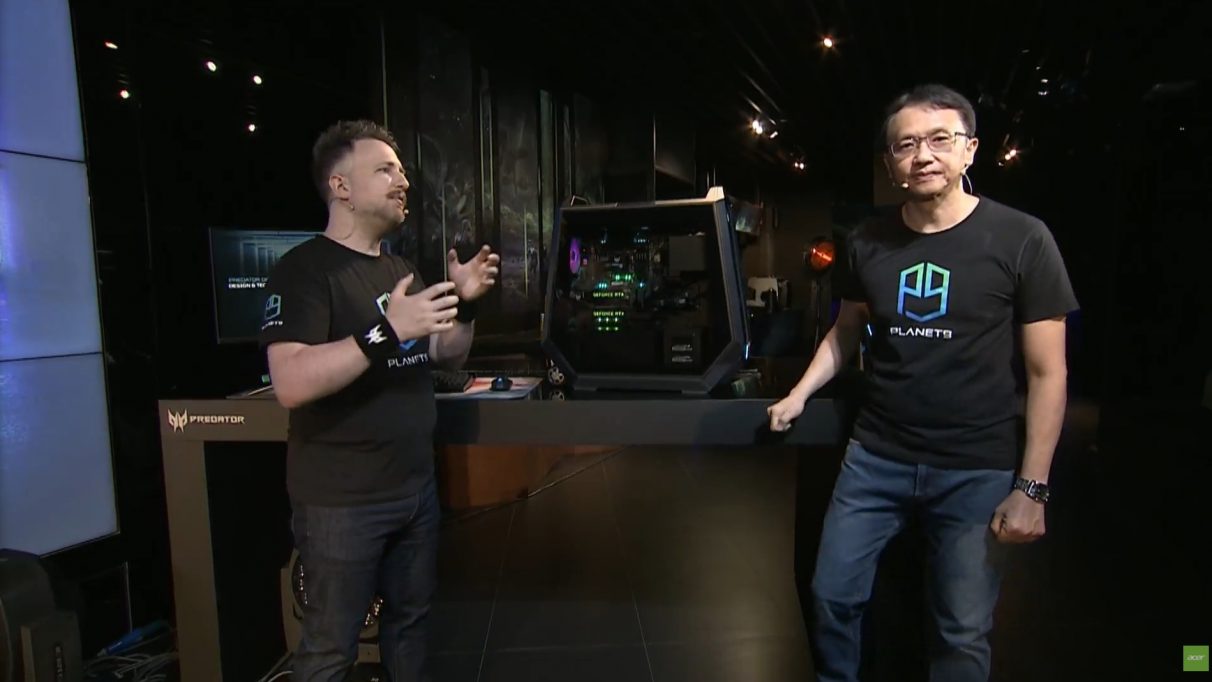 This PC means wheelly serious business, I tell you.

Of course, wheels aren’t the only thing that’s special about Acer’s new Orion 9000 desktop. In order for you to gaze longingly at the PC’s aforementioned Core i9 Extreme edition CPU and dual RTX 2080 Ti GPUs in SLI, the Orion 9000 now has a tempered glass side panel with EMI shielding to help cut down the amount of noise it generates while in use. This will be particularly good news for streamers or anyone who regularly chats with their mates online using a headset microphone, as it should also reduce that amount of white noise picked up by your trusty recording devices.

Acer have also decked it out with three, all-metal Predator Frostblade fans to allow up to 15% more airflow inside the PC compared to their previous generation of Orion 9000 desktops, helping to keep all those top notch components nice and chilly. There’s also space for up to three 3.5in HDDs and two 2.5in SSDs, and it also comes with USB 3.2 Gen 2 Type-C hot swap dock for even more storage options. It shouldn’t be too difficult to upgrade further down the line, either, thanks to Acer’s new tool-less design.

Alas, Acer’s slightly lower spec Orion 3000 desktop PC won’t be getting the same wheelie treatment as its mega sibling, but you still get the same EMI-compliant tempered glass side panel and Frostblade fans, as well as components ranging up to a 10th Gen Intel Core i7 CPU and an RTX 2070 Super graphics card. The Orion 300 will be arriving in Europe this July with models starting from 900€ followed by a US launch in September with prices starting at $1000, while the Orion 9000 is currently slated to roll out (sorry) in Europe sometime this October from 2700€. Alas, there’s currently no word on a US launch for the Orion 9000, but you can be sure I’ll be keeping my eyes well and truly peeled to bring you all the latest wheel-related news on this mega PC as soon as it’s confirmed.