“It’ll be easy,” I thought to myself, when it was suggested someone do a nice, timely little post on the new-ish Steam Points system, and the various new goodies on offer through it. “Sure, no problem,” I said, when Matt refused to write it because he thought Steam Points were “pointless”, and I was the only other writer on the call with Graham. Matt was being negative, I figured, and I’d show him the error of his ways with my happy-go-lucky, anything-goes, good times attitude. I’d breeze onto the Steam store, have a browse of what points-purchasable things were on offer, and do a quickie piece highlighting some of the most chuckleworthy.

Well, turns out Matt was right, and I was not.

It’s not like I don’t get the principle. It’s like a loyalty scheme, innit. You buy games, and with every bit of real money you spend, you accrue pretend money with which you can buy fun little things from the shop you’ve done business with. The going rate is 124 Steam Points for every paaaahnd. I don’t understand quite how it works with the Steam trading card system, which I was never interested enough in to figure out, nor the badge-crafting system which I’m pretty sure is part of it, but apparently those two things still exist, and it all makes sense.

Steam Points aren’t even new, apparently. In fact, as it turns out, I’ve got tens of thousands of the bastards already. But I think maybe they were a seasonal thing? You can tell what an impact they’ve had on my life. In any case, whatever the deal was with them before, they’re now… permanently a thing? And the things that they buy will last indefinitely, rather than dissipating into electric farts after a few uses. OK, very good. So what is on offer?

Well! As of the Steam Summer Sale – check out our picks for the best deals here – there’s a load of new things added to the haul of existing… things. To one extent or another, they’re either cosmetics for your Steam profile (like animated backgrounds, which are a bit MySpace IMHO), or emoticons, stickers and chat effects to use in Steam chat. Here’s some of the new crop of animated stickers, which I have not bothered to make into an animated GIF, so you’ll have to use your imagination: 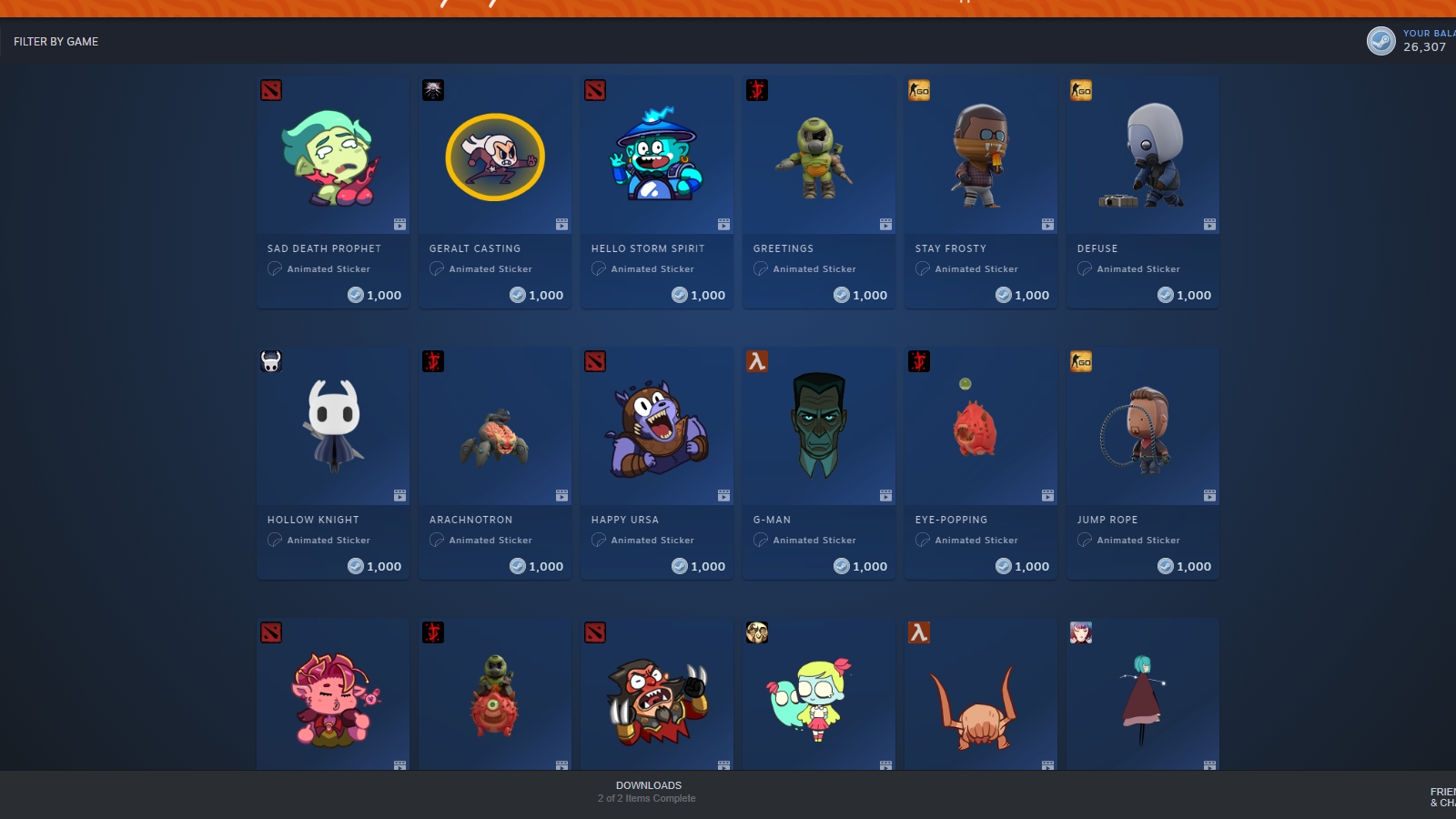 Look! It’s all your favourite characters from… games!

Admittedly, some of them are pretty fun in the sense of “ah, there is a character I recognise, drawn in a different style from the one in their game of origin”. But I’m not sure what use they could possibly be? For a start, I don’t really use Steam chat. There’s already an upsettingly large number of communication apps constantly buzzing, blinking and booping their way through my attention span every damned day, and except for on some rare occasions where it happens to be the medium most conveniently to hand, I don’t particularly want to use yet another one. 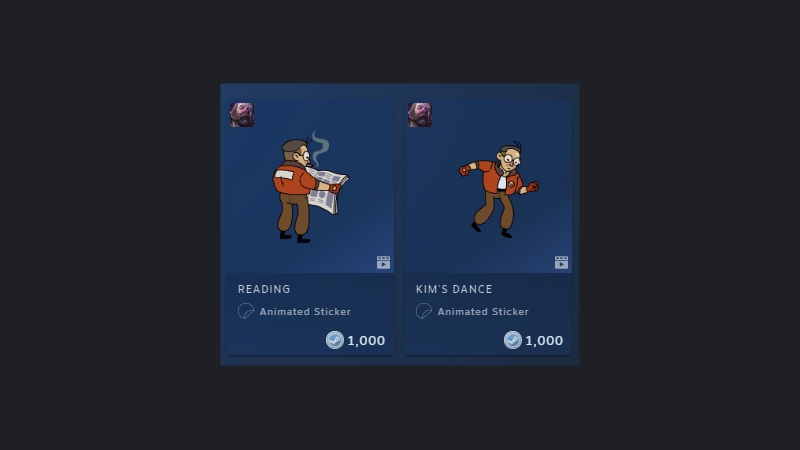 But even if I did use it all the time, I’m struggling to think when these stickers and the like would prove useful, at least after the novelty value wore off. I mean, how often do you really feel anything which can’t be expressed in words, but which can be expressed by a 3D model of Cuphead, bobbing up and down vacantly?

Perhaps, I thought, I was being a bit of a git. Perhaps if I just splashed some of my hoard of Steam Points on the things, I might start to get in the spirit of the system. So I used the ghosts of pounds spent years ago to grab a slapdash assortment of things I liked the look of, and fired up Steam chat to inflict them on someone. Matt happened to be online, which seemed fitting, so I decided to pay him a visit. 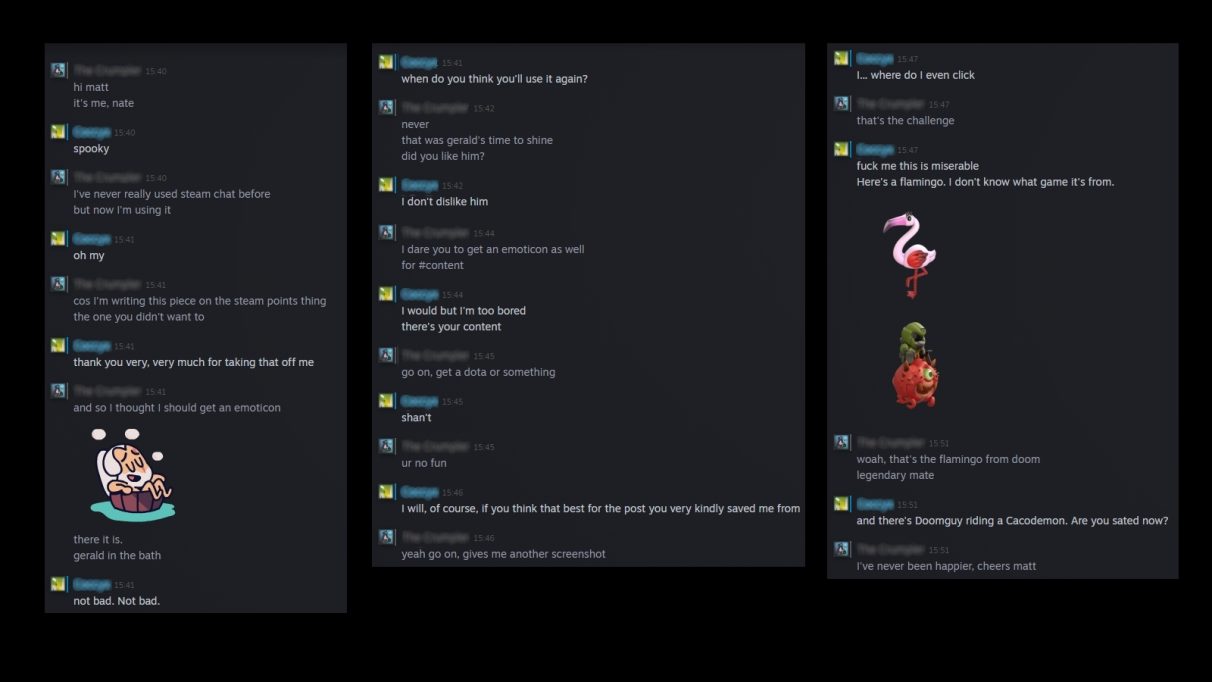 I have to say, I still wasn’t feeling it. And Matt’s question made me realise, deep in my soul, that my stickers had just seen their first and last uses. Nevertheless, being a sucker for the sunk cost fallacy, I went and bought more gubbins. Then I bothered Matt again: 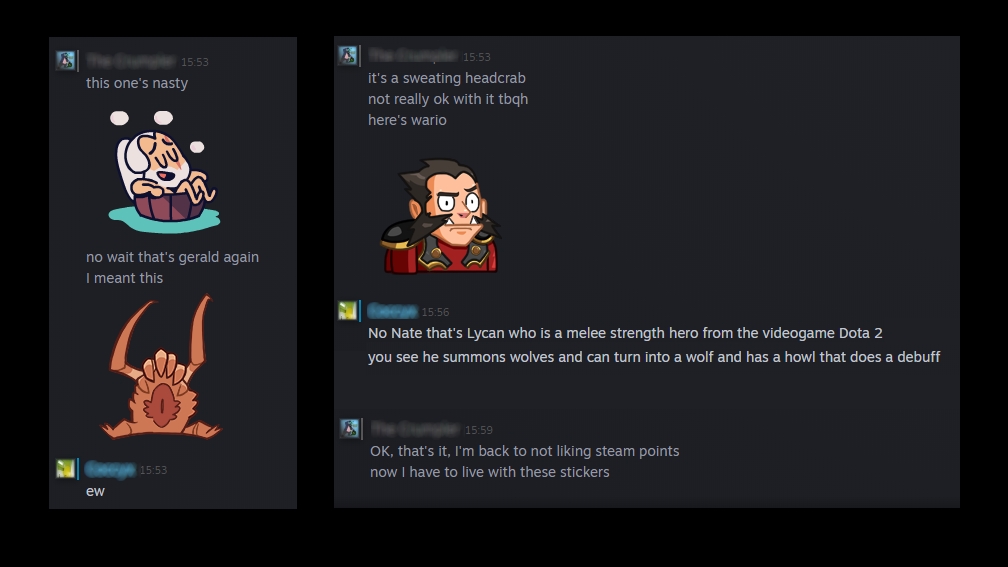 And that was that. Now half an hour has passed, I wish I could just have the points back. Because even though they might not be worth anything in themselves, at least they have some sort of appeal to a vague hoarding instinct. They were a way in which the thousands of hours, and pounds, I’d spent over the years had been turned into something discrete and different. A sort of talisman, I guess, to make me feel like I’d achieved something by spending money. And now they’ve been turned into sweating headcrabs, bathing Geralds, and hairy Warios, which I will almost certainly never find a use for.

Ah well. Perhaps I’ll get into Steam trading cards after all.