Based on its intensely confusing demo, I’ve concluded that I really like everything about Ostranauts, except for actually playing it. Admittedly that’s a fairly significant obstacle, and it seems I’m not the only person facing it. But it also seems developers Blue Bottle Games are acutely aware of where the pain is coming from, and it looks like they’re holding off on launching into early access until it’s been alleviated a bit. I hope it goes well for them. Because beneath a UI that makes even the simplest task so onerous that it’s not worth bothering with, this is a rich, fiercely imaginative simulation that I’m desperate to fall in love with.

Any conversation about Ostranauts should start with its setting, which is a bit like the setting of The Expanse series, only if it had all its optimism knocked out, along with its teeth, by a hammer in the shape of Blade Runner. It’s a universe in that sweet middle ground between planetary dystopia and space opera, where humanity has colonised the solar system, but doesn’t have FTL travel to go any further, and is spreading earth’s unrepentant corporate misery over every lump of rock in the sun’s embrace.

Of course, there’s an extra spicy twist in Ostranauts, in that the earth just got slam-dunked into a bin. As detailed in sort-of-prequel NEO Scavenger, the homeworld has been comprehensively busticated by a catastrophe of largely-human origin, and is not only dying hard, but completely cut off from human holdings in space. This, then, is the future you’re thrown into as a fledgling spaceship captain: a solar system burgeoning with mineral wealth, but with humanity clinging on by its fingernails to half-established colonies, trying frantically to set in for the long haul now that any hope of fresh supplies from home is gone. 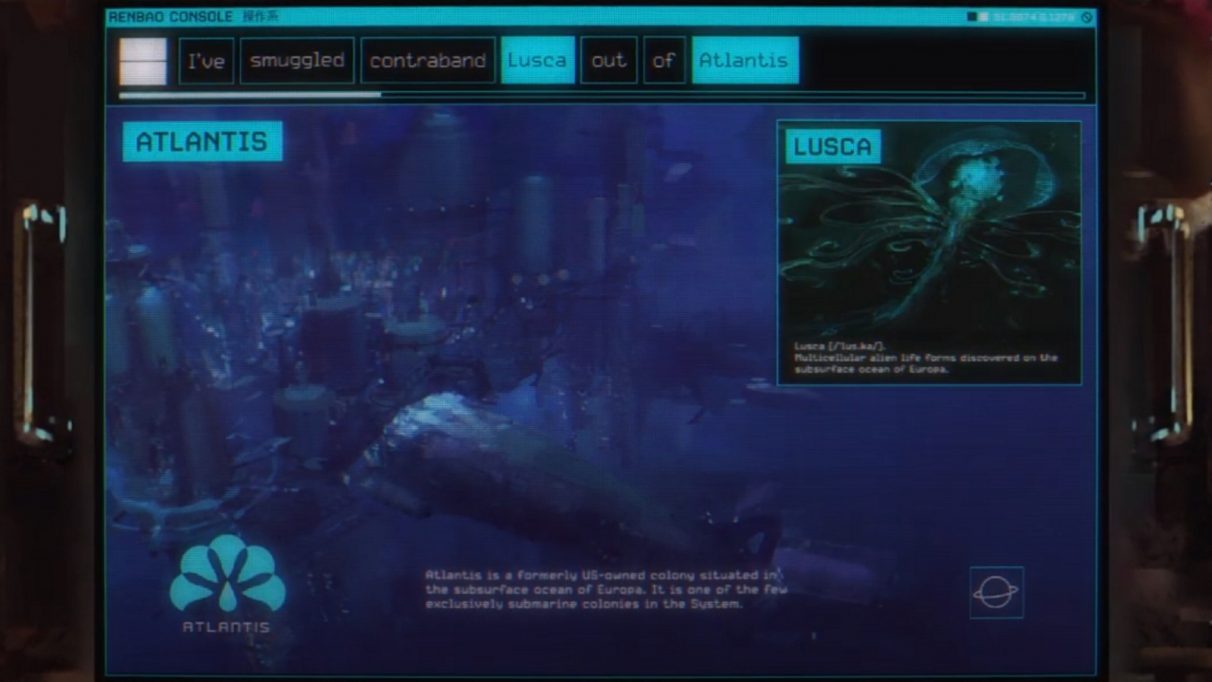 I absolutely thrive on this stuff. I want to go there, and do crime!

As Graham noted last year, this setting comes with some top-notch SF worldbuilding, and every part of the demo drips with it, too. The writing is great. It achieves that thing science fiction so often attempts and so rarely manages, in giving the sense of a world that’s fully realised and consistent with itself, and which will keep about its business whether you happen to be looking into a tiny corner of it or not. You get the sense that wherever you look, you’ll find something interesting.

And in theory, that’s exactly what Ostranauts should allow you to do. After working with it to generate a backstory for your captain, via an interactive fiction minigame of sorts, you’re turfed out into the big wide empty, in the interior of a top-down spaceship, and left to either make your fortune, or simply avoid mortal and/or financial ruin. There are a huge number of destinations to visit (although not many seem to be properly designed at present), and a wealth of activities you can engage in, from smuggling to salvage to piracy to commercial shipping, and everything in between. 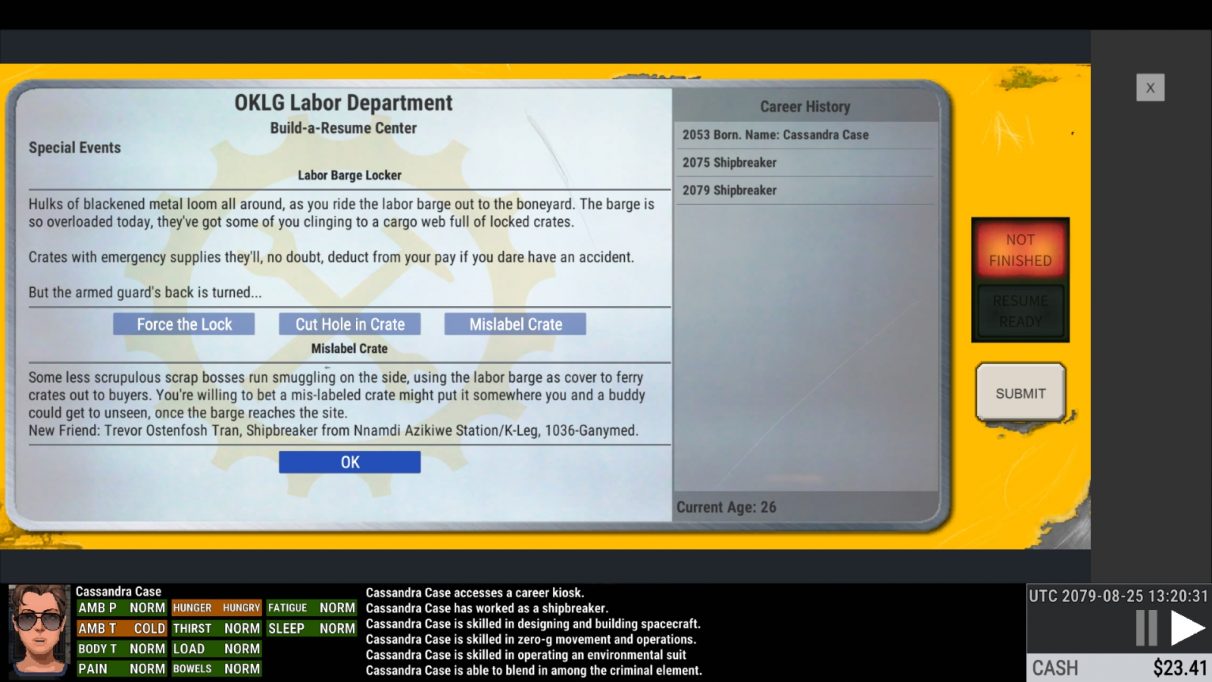 I love the backstory generator, to the extent where I suspect it might end up being my favourite part of the game.

Every component and object on your ship is interact-able-with, in an immersive simmy sort of way, and there’s a good deal of the inventory management lols that made their mark so definitively on NEO Scavenger. Pretty much every major function (reactor, navigation, life support etc) can only be operated in an intermediate way, as you click your ostranaut and have them access the controls of the machinery in question. At this point, you’re confronted with a full-screen, in-universe rendering of the control console, complete with baffling dials, readouts and labels (written partially in opaque abbreviations and partially in Chinese characters), which you have to figure out how to use. Nothing, therefore, is simple.

Once you’ve got yourself a crew they’ll join your captain in operating all this gubbins, and will make their home aboard your ship, where they’ll need to eat, shit, breathe, stay warm and so on. They’ll also interact with each other, on the basis of what appears to be an impressively detailed personality modelling system, and do millions of push-ups. Dwarf Fortress, Rimworld and other colony simulators are the clear influence here, and from what I can tell, Ostranauts plays out with Rimworld’s mix of direct control and autonomous action, weighted somewhat towards the former. That is to say, you can “possess” crew members to make them do stuff directly, but if you don’t, they’ll fall under the game’s control and ant-farm around according to broader directives or their own whims. 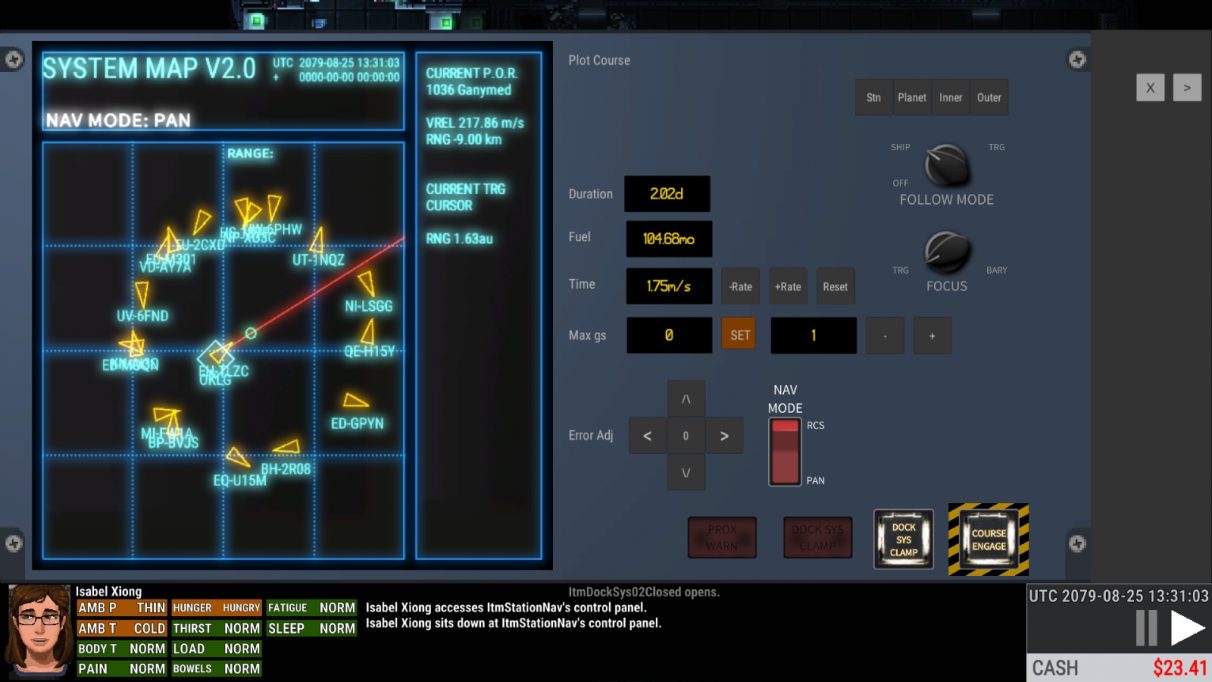 The navigation console: clearly, it’s obvious what to do here in order to make your spaceship go places.

And just as any article on the incredible possibilities of living in space usually ends with a caveat about the near-insurmountable practical difficulties involved, so too must this post. Because doing anything in Ostranauts is a colossal pain in the arse. I don’t mean the control console stuff – figuring that stuff out is part of the fun, and presses the same, literal, buttons that Nauticrawl did for me. What’s miserable is how convoluted and unintuitive simple actions are.

One of the demo scenarios involved, essentially, getting to a derelict spaceship’s reactor room from the airlock. Just that. But it was so goddamned frustrating that if I hadn’t been writing about the game, I would have given up very very early on. Just picking things up and using them was a process fraught with needless clicks, accidental abandonment of the entire process, and the non-fun sort of unintended outcomes. At one point, during the inventory screen flailing involved in trying to get a drill off the floor, I took off my entire EVA suit in hard vacuum. Some things I tried to do, which seemed monumentally simple, resulted in nothing happening at all, resulting in that dreaded “I’m stuck” feeling I’d been glad to leave behind with 1990s adventure games. 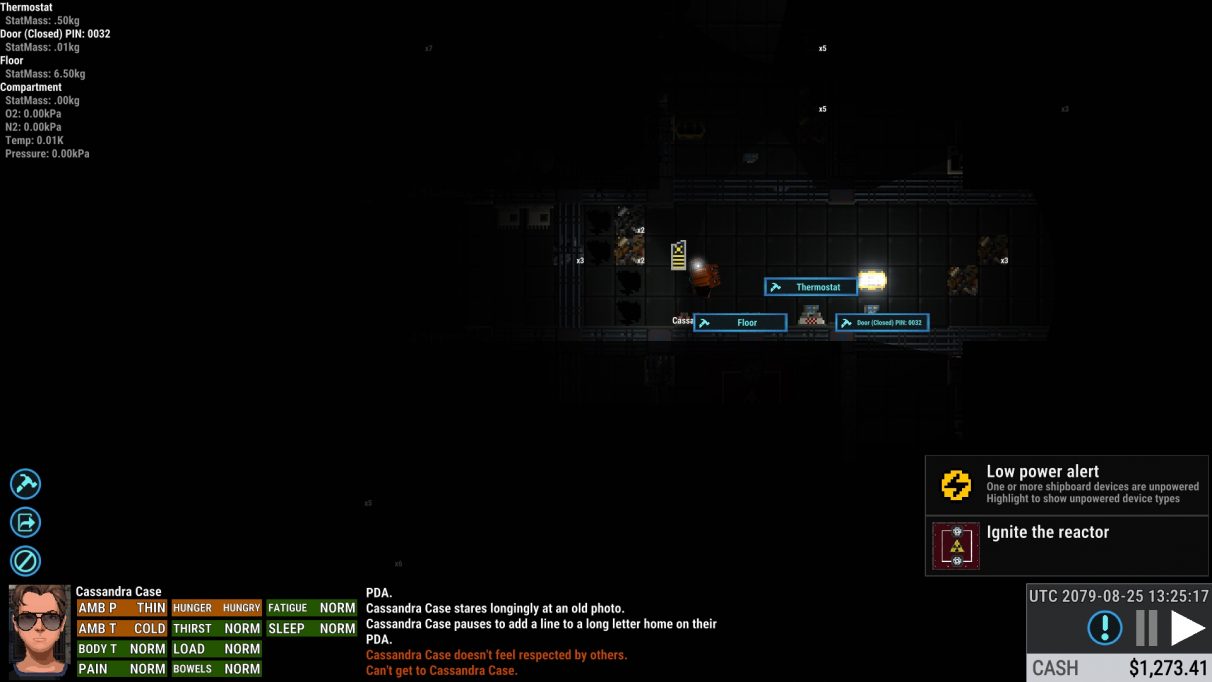 I suppose the biggest problem here wasn’t with the attempted actions not working, but with the game’s stony, tactiturn refusal to tell me anything at all about why they weren’t working. I get that space is a difficult place, and that it can be fun to claw your way from complete bafflement to mastery of an opaque system. Indeed, as a long-time Dwarf Fortress player, I consider this a solid way to have a good time. But failure should always come with feedback of some kind, as trial and error only works when you can begin to identify the reasons for error. I was wowed by the complexity underlying Ostranauts’ simulation, but with so little certainty about any of it, it was as much fun as trying to untangle a cement mixer full of 5-metre USB cables. Or indeed, trying to guide a sullen robot through the untangling of a cement mixer full of 5-metre USB cables, via a remote control with 200 unlabelled buttons, half of which don’t work.

I think it’s fixable. Daniel Fedor, the main fellow at Blue Bottle, is a smart bloke, and his communications with players suggest he knows exactly what’s not working with Ostranauts. What’s more, he now has the support of a publisher in the form of Modern Wolf, who seem willing and able to help him untangle things. And once Ostranauts hits early access, I know for sure it’s the sort of game whose fanbase will readily dedicate themselves to the collaborative effort of making it work better. I’m confident it’ll get there, and I’m confident it’ll be worth it, as under that screaming Frankenstein of an interface, there’s an Adonis of a space sim.