Next-gen graphics card fever has gripped the internet hard over the last couple of months, with rumours flying this way and that about the upcoming Nvidia Ampere GPUs and the ray-tracing-capable Big Navi cards. But the latest GPU gossip doing the rounds isn’t anything to do with Nvidia’s RTX 3000 series or the hotly rumoured RTX 3080 and RTX 3090. Oh no. Instead, it would seem Nvidia are preparing yet another variant of their entry level GTX 1650 graphics card called the GTX 1650 Ultra according to a new product listing from a Chinese graphics card vendor. The real kicker of this story, though? Its GPU is apparently based on the same one that currently resides in the RTX 2070. 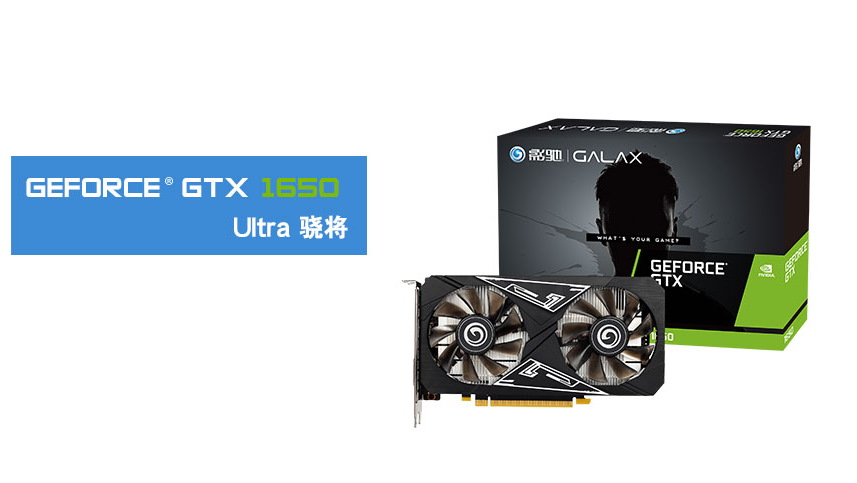 There’s no ‘Ultra’ logo included on the box of this SZ Galaxy-sold GPU, but its product specifications do suggest this is a new variant.

It’s a mind-boggling set of contradicting facts if ever I saw one, but before you dismiss it as official internet nonsense, the most likely explanation for all of this is that these new GTX 1650 Ultra GPUs are actually the rejects from failed RTX 2070 yields. When a hardware manufacturer makes their silicon wafers, there’s always a certain percentage of them that aren’t fit for their intended final product. They either fail internal tests or just aren’t up to the required snuff to sell them as the thing they were intended for. This is what’s known as “binning” in the industry, and it happens with CPUs, GPUs and RAM. When products do get binned, it’s pretty common for manufacturers to disable certain features of these bits of silicon in order to sell them on as lesser, cheaper variants so they don’t lose money – and it’s probably what’s happened here with the GTX 1650 Ultra.

Alas, this means that the GTX 1650 Ultra probably isn’t secretly an RTX 2070 in disguise, as Nvidia will have almost certainly disabled its respective ray tracing and Tensor cores to bring it down to the same level as their regular GTX 1650 cards – hence the dramatic reduction in CUDA cores. There is one key difference that’s of note, though, and that’s the fact that its TDP has risen from 75W up to 90W. That’s still 10W below the GTX 1650 Super, but it does suggest that the Ultra is perhaps a touch more powerful than the vanilla GDDR6 version of the GTX 1650, simply by virtue of being able to draw more power.

As for the rest of its specs, though, it really doesn’t look like there’s anything even vaguely “Ultra” about it to justify the name – which is perhaps why there’s no special “Ultra” logo on the accompanying product image of the card’s box like there is with the GTX 1650 Super. Instead, it seems likely that Nvidia will probably just pass this off as a regular GTX 1650, despite the fact it has a completely different GPU sitting at the heart of it. We won’t know for sure until Nvidia formally announce it.

The real question, though, is whether the Ultra has the chops to finally topple the 4GB version of AMD’s stupendous RX 5500 XT, which is still the best graphics card for those on a tight budget. If I ever get my hands on a GTX 1650 Ultra sample, you can be sure I’ll let you know.