Fallout 76 recently kicked off its new seasonal update system. The opening season is called “The Legendary Run”, and gives the game another new arbitrary point-tracking system, this time called “S.C.O.R.E.”.

More significantly, it’s also opened up the option for players to create and join teams with unfamiliar players. I’ve been giving that a go and it’s… well, an improvement. A bit.

The S.C.O.R.E thing is mildly confusing. Modern MMOs are generally confusing and esoteric, to the point where even writing about them is difficult without first translating a load of jargon and obtuse systems. I actually started doing that with this post, then had to cordon it off because god, it’s so boring. The short version is that for the rest of the season (8 weeks or so) you can gain S.C.O.R.E by doing daily and weekly activities, before cashing it in for bonus items.

The more interesting part of this season is those public teams, as the game’s social system was previously a bit of a mess. I remember a notification popped up from the first player I met, saying that they’d invited me to be their friend. To this day I have no idea where I was supposed to go to actually see that invitation, or respond to it. The public teams are an effort to improve that. The idea is that any player can start a team at any time, which invites everyone on the server to join (although team sizes are limited to 4), and gives joiners a stat bonus depending on the type of team you select. Combined with the easy and cheap fast travel system, it’s refreshingly easy to join each other.

Actually communicating is another matter. There is no chat in game. I actually like that (especially the absence of voice chat). Maybe it’s to foster a sense of wilderness solitude, or maybe it’s just so that Bethesda don’t have to moderate the chat. But I like it. Because I play Fallout 76 mostly alone, happy to trade a bit and briefly help other players when I see them, and able to shoot back if anyone tries anything dodgy.

The downside of no chat system is that when you want to do more than that, it all falls apart. And however antisocial my playstyle, well, this is an MMO. Even I must accept that people want to chum up with strangers, and even I partake in it, now and then. 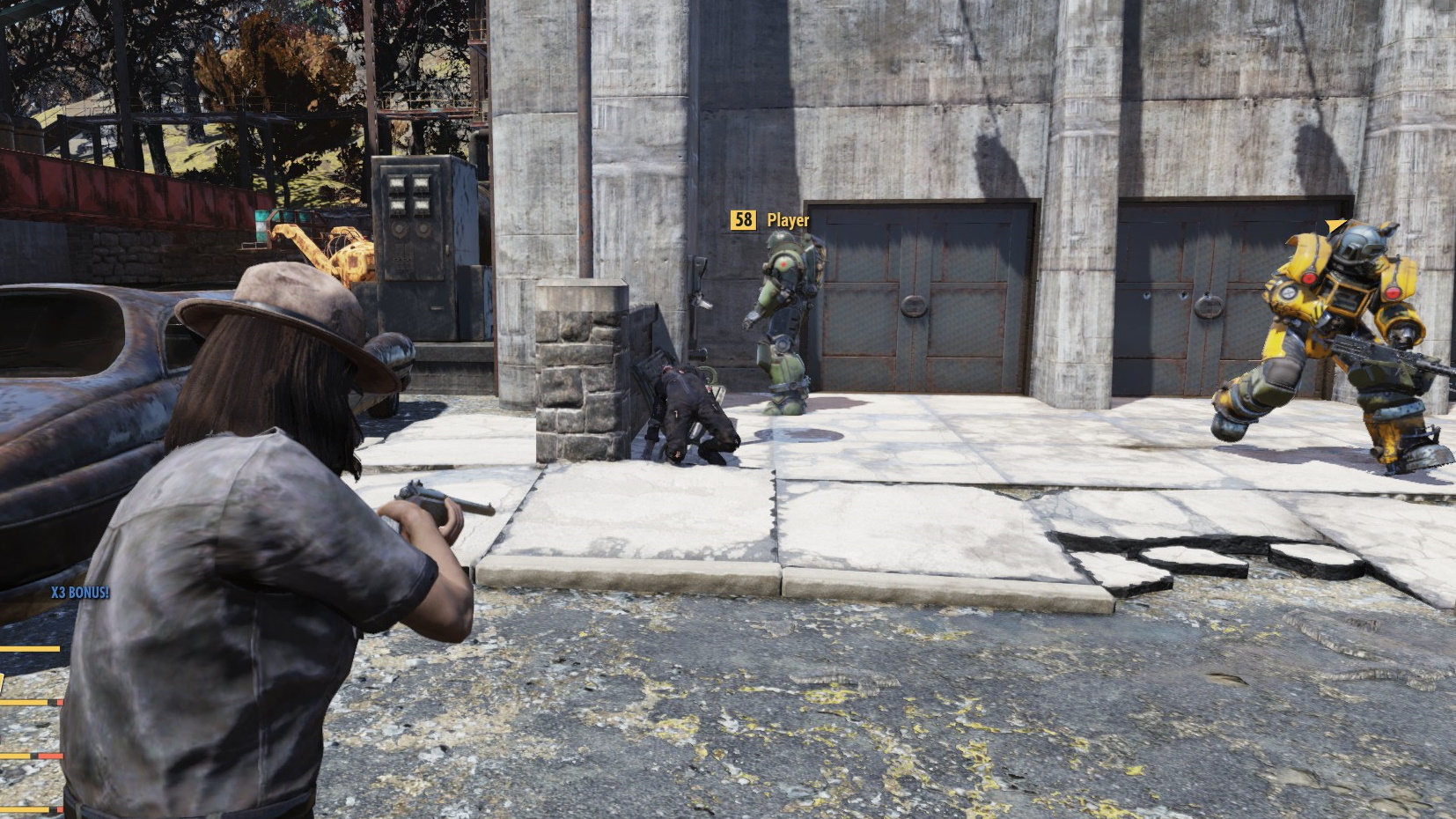 This team welcome me but I still have no idea what we were doing.

My experience with public teams so far has been a case of joining open teams, then spending between two and fifteen minutes trying to figure out what exactly we’re supposed to be doing together before getting kicked, frustrated, or told that an event attempt failed mere moments after I joined it.

People have been friendly, judging by the waving and thumbs-up emotes you can initiate with a press of the G button, but have had no way to express themselves beyond that. It’s also not easy to find an event to team up for in the first place. So are players actually using the teams to do the events? Or are most of them just forming public teams because when you do that, everyone in the team gets a temporary attribute bonus, even if they’re not co-operating at all, or never actually meet up?

This problem isn’t entirely unique to Fallout 76. Public groups have always been fraught with uncertainty in MMOs. But there’s a tension at the heart of Fallout 76, and it’s one the public events and groups unfortunately bring directly to the front of the stage. It wants to be an individualistic building and survival game in a grim world full of monsters and radiation, and it also wants to be a wacky, looter-shooter theme park ride for everyone. And I’m not sure if it can ever resolve the two tones. If they add proper communication and public event options, I’ll probably feel my camping and scavenging game, with its chance of randos both hostile and nice, has been fatally undermined by a stream of gamespeak. But if they don’t push for players to team up and do big cartoon events, what is there to do for everyone else?

I continue to have mixed feelings about the whole thing. Bethesda have promised more events and tweaks later in this season, and I do feel it is becoming a tangibly better game. But I’m not sure it’ll ever stop feeling like a game whose design is at war with itself.