People in Fallout 76 are decent enough, in my experience. I forget whether I’ve related my first encounter with another player, where I accidentally blundered into their camp, then backed away in the panicky assumption that they’d attack me, only for them to instead drop a gift bag with a level-appropriate hunting rifle and some ammunition in it. I still have that rifle.

Most people I’ve met were similarly friendly, or at least indifferent. But then there was Overprotective Thumbs Up Statue Power Armour Hermit. They were no fun at all.

I amble. I play Fallout 76 much as I do all of Bethesda’s Oblivilout games (note to self: Oblivious Lout should be a character class): by ignoring everything that I don’t care about. I mostly walk around, pretending the world is as dangerous as it looks, and not one in which you can shrug off dozens of bullets if the person firing them has the wrong number over their head. I wear a ranger’s outfit, because I kind of am ranger-ing, and because I like how it looks. Grinding is of no interest. Power armour is silly. Hunting rifles and revolvers and a very weak hatchet are my thing, because… I dunno. I just like them more than I like doing maximum damage. 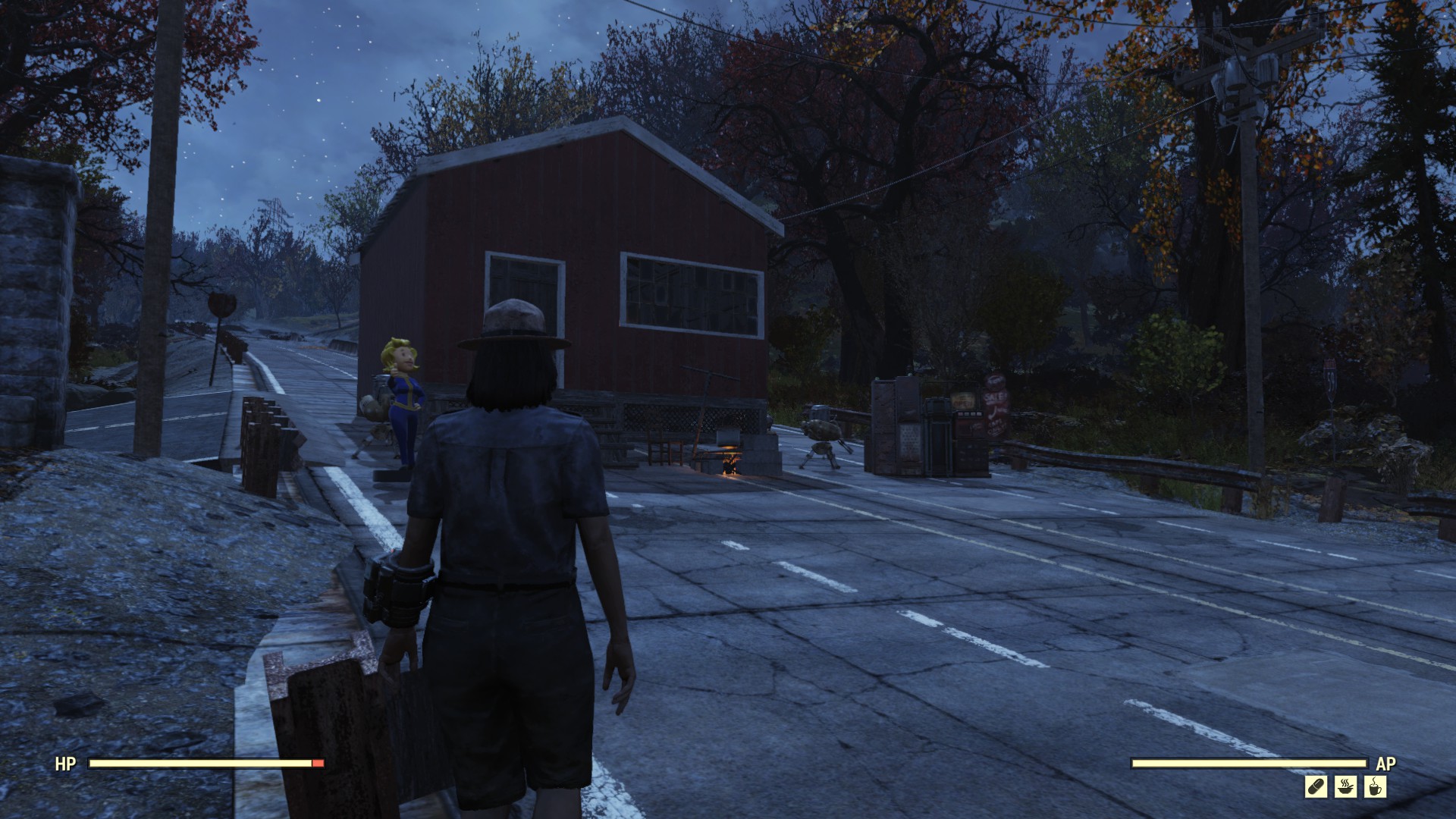 And that’s how I came across this player’s camp. Every player, see, can build a camp, straight from the off. It can be as simple as a campfire and a box hidden in the woods, like mine. Or thanks to a heavy focus on base components as purchasable cosmetic items or event completion rewards, they can be quite elaborate and colourful, especially the ones intended for other players to visit and buy things from. So when I found this camp in the middle of a main road, of course I paid it a visit.

Look at the below. This is friendly. This is clearly a friendly camp, right? It has a mascot and everything: 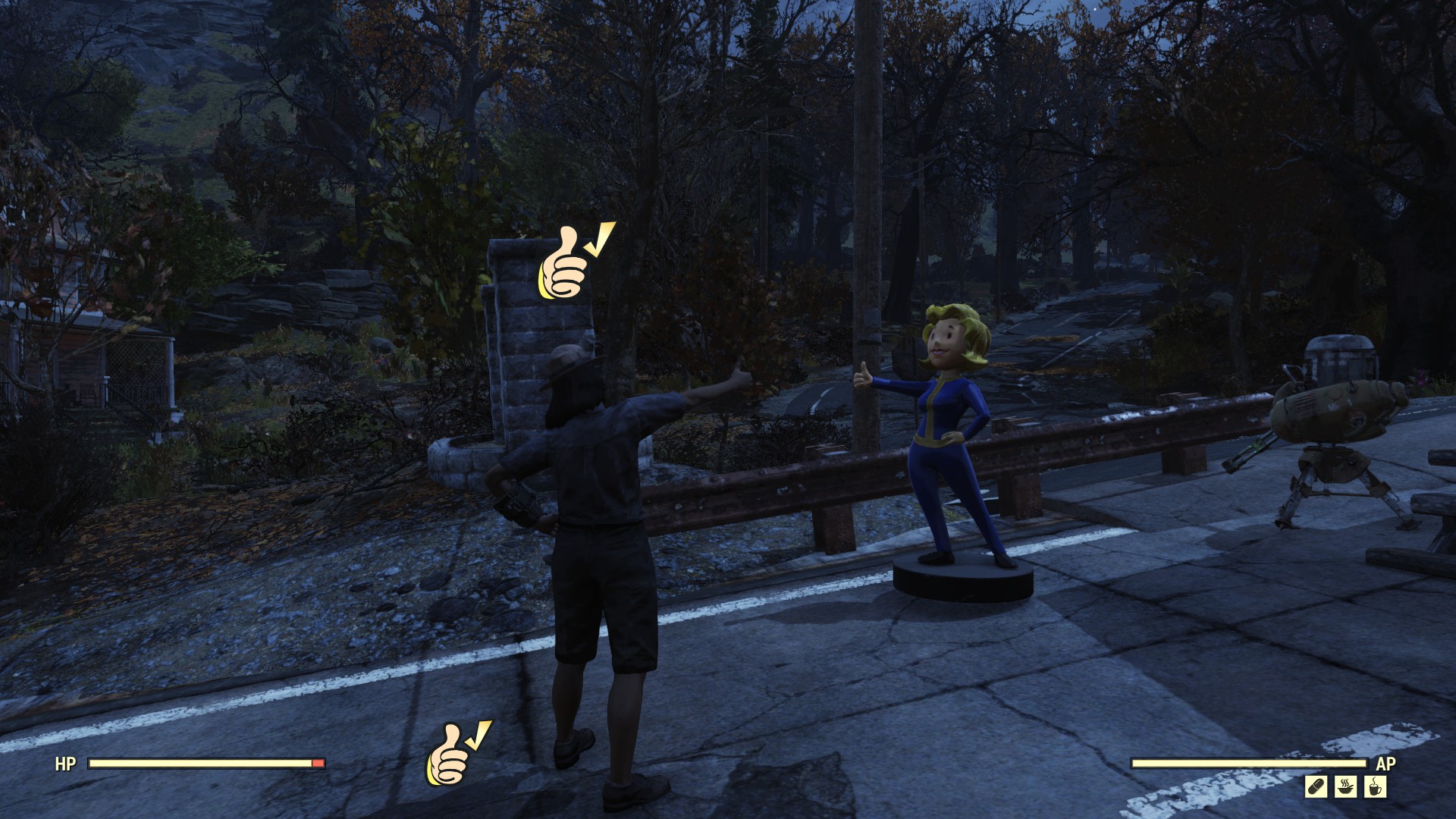 I spent, uh, a while, doing some thumbs up gestures back at the evil corporate mascot. And I can only assume that this outrageous violation of the MMO rules was why the builder of the camp teleported in behind me to threaten me off. 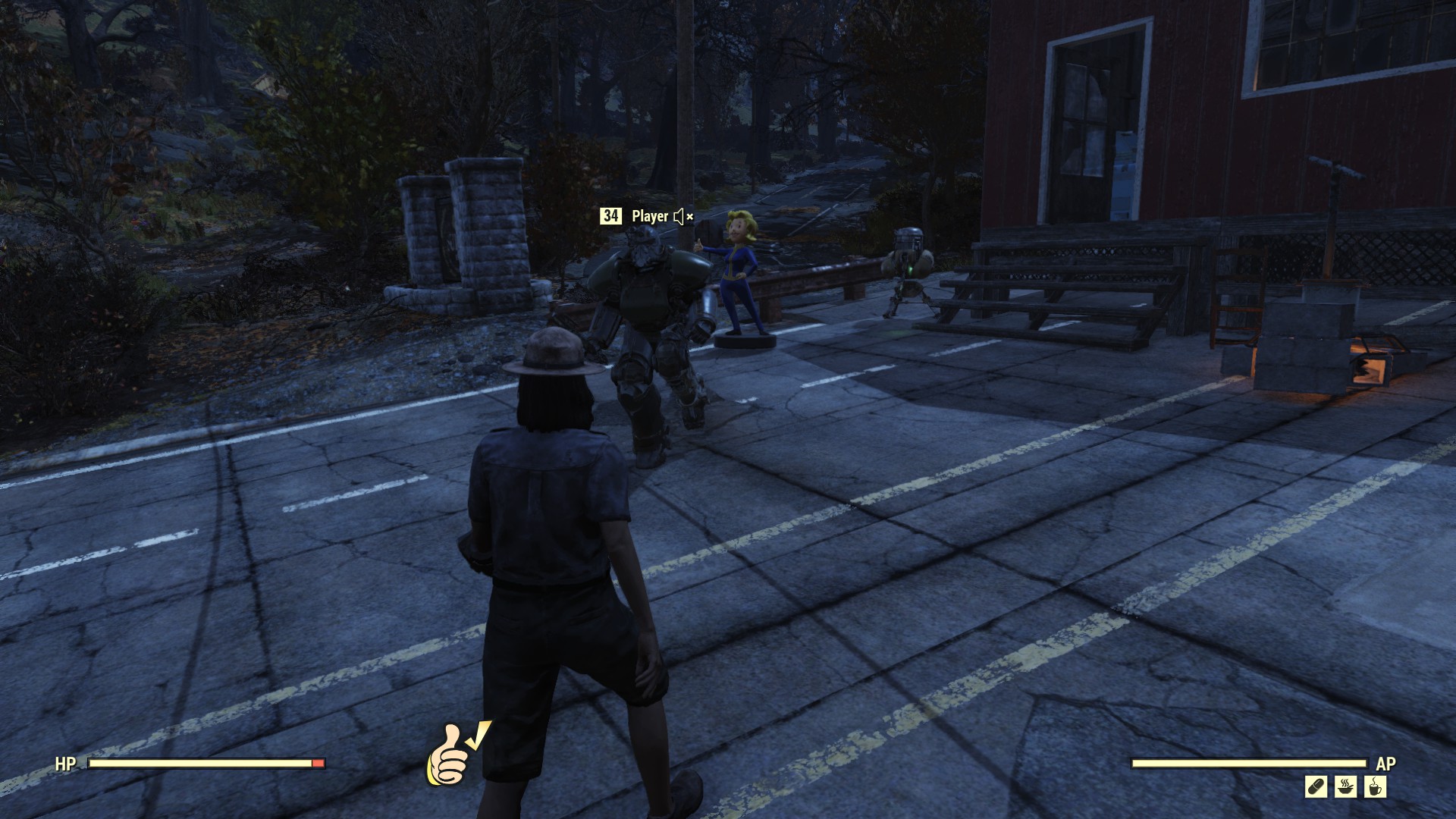 Maybe I should have shoved some cram in their pockets?

The hulking Fun Cop grumpily stomped about between me and the sign, looming threateningly over me in a clear warning. I slowly backed away, hoping to defuse this situation, but no, they continued to loom. I continued to cautiously walk backwards, which in hindsight probably just alarmed them even more because anyone not constantly sprinting directly to the quest marker at all times is, as we MMO players know, a demon terrorist from the freak dimension. 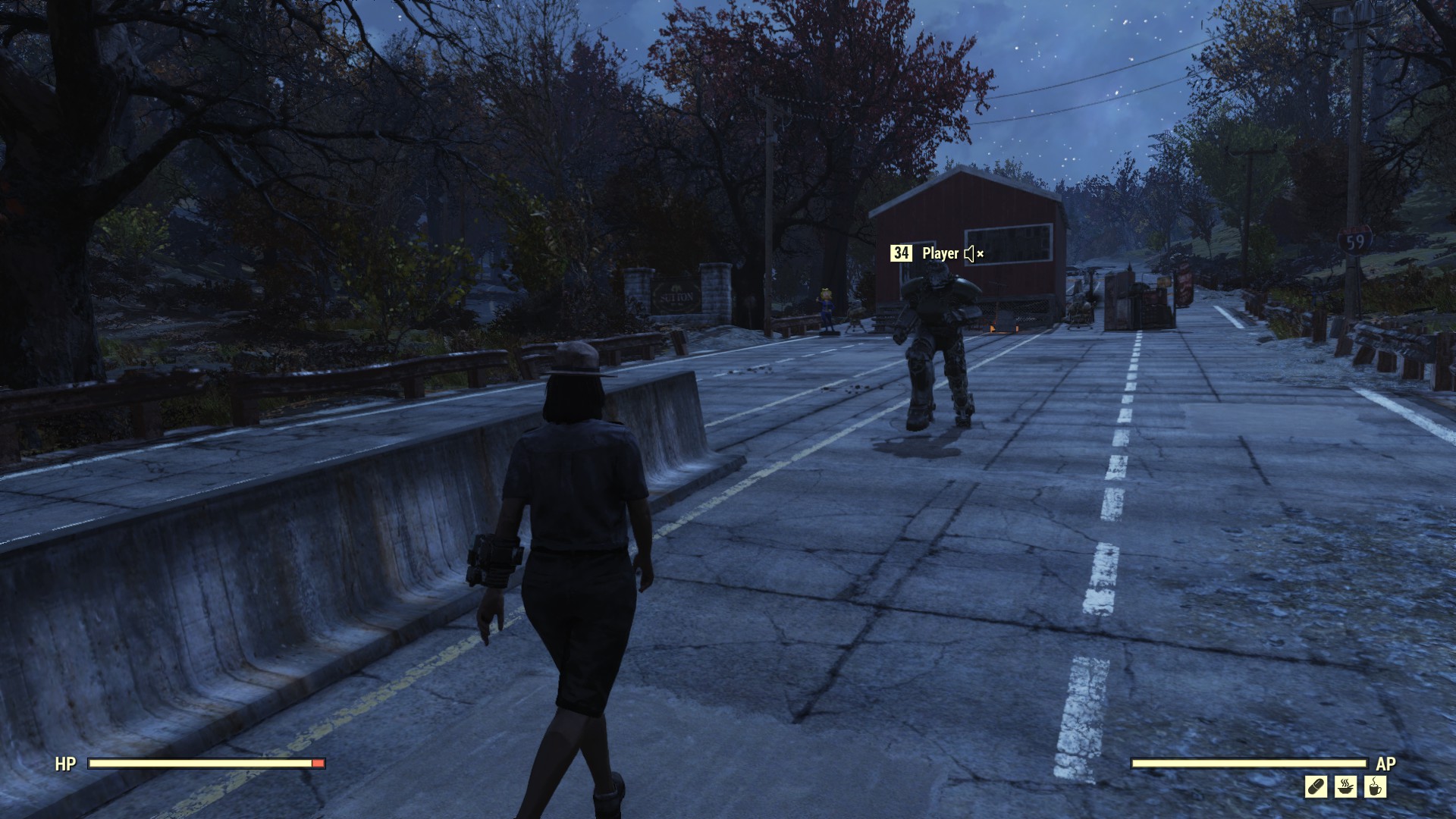 There’s a point to be made here about a series that started out satirising consumerism and how a possessive, paranoid society drives it to destruction. But on the other hand LOL PIP BOY LOUIS ARMSTRONG NUKE EACH OTHER FOR XP AMIRITE?

I could have run away. But instead I continued to back up, then slowly carried on in the direction I’d been travelling before I found the camp. The defender continued to press me for a considerable distance, but yo their credit, they didn’t attack. I’ll give them that. A lot of players would probably have just killed me, but they took the non-violent option, even if murder was implied. It’s possible too, of course, that they were trying to be friendly. Perhaps they were even inviting me to trade, or attempting to pose for a photo or some other such gesture, and I simply misunderstood. But I doubt it. 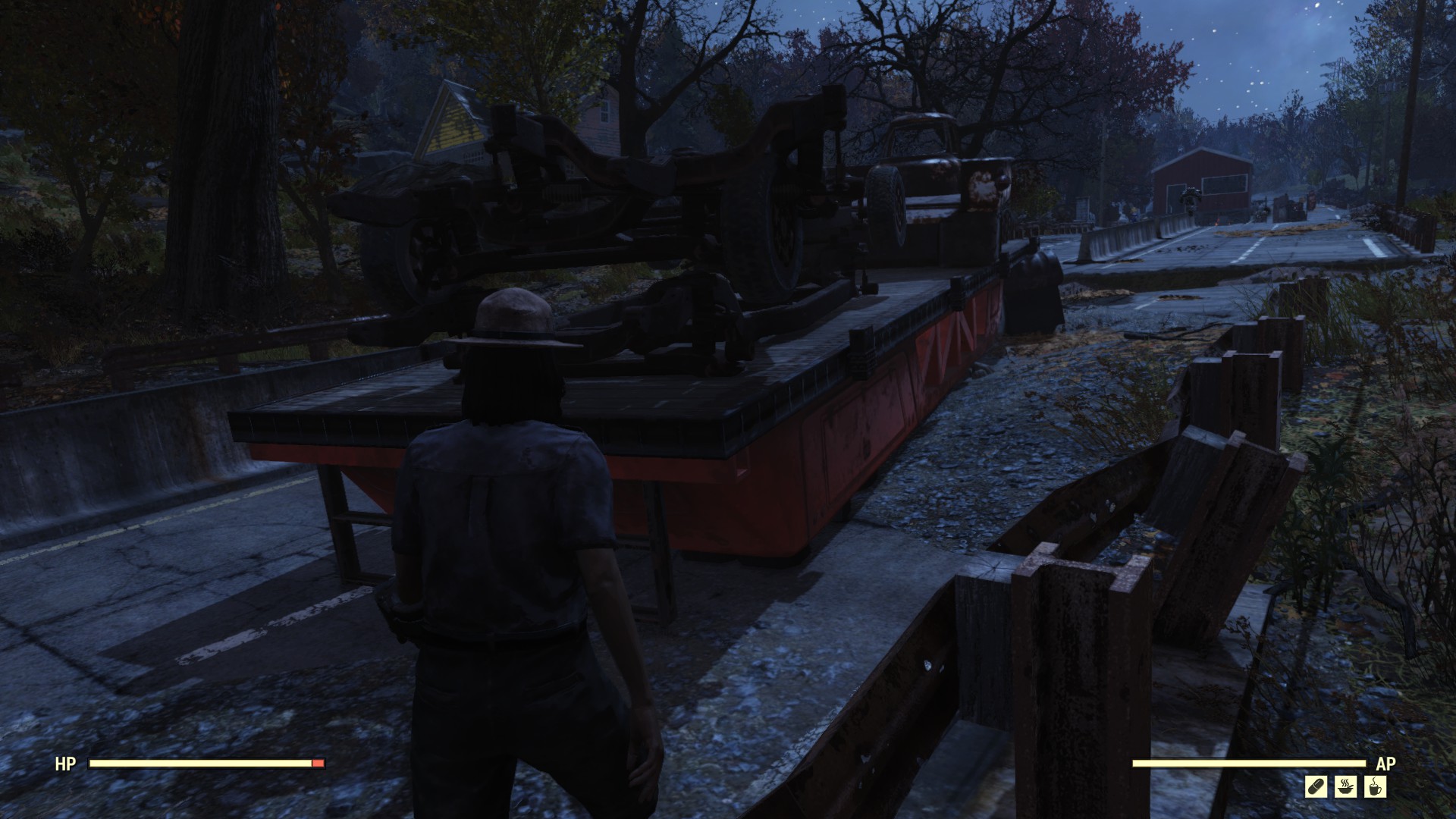 I do kind of love how they continued to watch me from the porch though.

I’m disappointed, to be honest. I am fully on board with being a hermit, even in an MMO. But if you build in the middle of a road you’ve got to expect visitors, surely. And who builds a happy, welcoming thumbs-up statue, then chases people away when they greet it? Sure, maybe it’s suspicious to show up and loiter at someone’s house, gesturing at an inanimate object for several minutes, for no real reason. But if you can’t tolerate weird loners in a Fallout game, what are you even doing here, huh?

In fact, you know what? They don’t deserve that statue. I’m going to petition Bethesda to add something that lets me sneak back into that camp and replace it with the sign this camp was clearly made for: 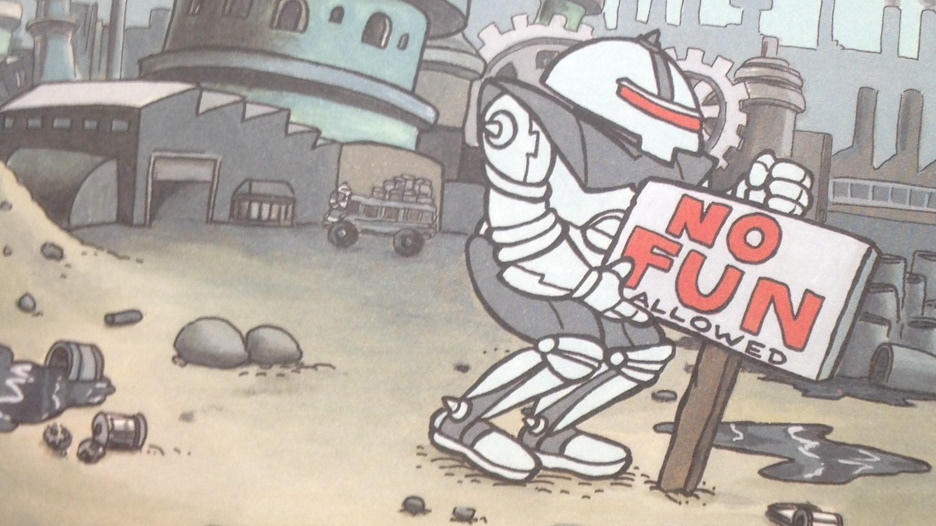