We’re almost spoiled for choice when it comes to great 2560×1440 gaming monitors these days, but the BenQ EX2780Q is another strong contender that’s worthy of your consideration. For starters, it’s one of the few gaming monitors I’ve tested that actually has a built-in (albeit very tiny) subwoofer to accompany its pair of 2W speakers, but it’s also got a super accurate IPS panel, a high 144Hz refresh rate, AMD Freesync Premium support and one of VESA’s DisplayHDR 400 certifications for low-end HDR. In short, it’s got pretty much everything it needs to challenge my current best gaming monitor for 1440p champion, the AOC Agon AG273QX.

Its design is certainly a lot less ‘gamery’ than its AOC rival, although its chunky (and mildly old-fashioned-looking) brown speaker grille and central ambient light sensor won’t be to everyone’s tastes, either. If you can get past its rather dated bronzed look, though, then this is one gaming monitor that won’t be an embarrassment to have on your desk. It even has a USB-C port accompanying its pair of HDMI 2.0 and single DisplayPort 1.4 inputs if you want to hook it up to a thin and light work laptop, too, giving it plenty of flexibility when it comes to plugging in lots of devices.

BenQ EX2780Q review in a nutshell

A well-specced 2560×1440 gaming monitor with superb colour accuracy, but overall it’s just not quite as good value as its similarly priced competition.

Sadly, that flexibility doesn’t extend to its fixed stand. You can, at least remove its rear panel and thread your monitor cables through it for maximum tidiness, but when you’re spending £425 / $450 on a gaming monitor like this, I’d really expect a height-adjustable stand as standard. 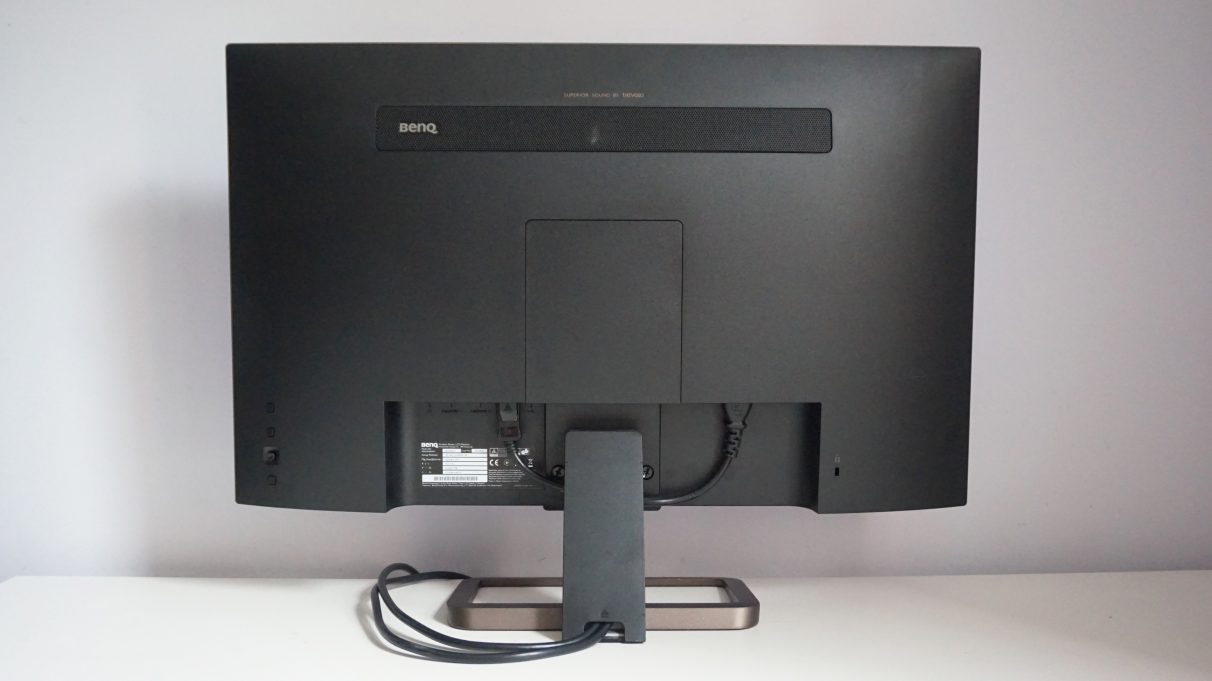 Still, I certainly didn’t have any complaints about its IPS panel, which is pretty much perfect straight out of the box. On its default settings, which uses the Standard colour mode and Normal Colour Temperature, my X-Rite DisplayPro i1 calibrator showed it was already displaying a practically perfect 99.9% of the sRGB colour gamut, and a very impressive 94.3% of the HDR-grade DCI-P3 gamut. Even the best HDR displays only have to hit at least 90% of the DCI-P3 gamut, so this is very good news indeed, especially when even the AOC Agon AG273QX and its close rival, the MSI Optix MAG272CQR, only had around 88% DCI-P3 coverage.

I was also pleased to see a decent contrast ratio of 1070:1 and a reasonably low black level of 0.33cd/m2 (the closer to 0.00cd/m2, the better). Admittedly, these results aren’t quite as impressive as its AOC and MSI competition, but it’s still roughly in line with what I’d expect from an IPS panel. Both the AOC and MSI have VA panels, which have naturally higher contrast ratios and deeper black levels. Still, I nevertheless felt a bit frustrated when I tried playing particularly dark games on the BenQ EX2780Q such as Close To The Sun and Little Nightmares, and I had real trouble seeing what was onscreen when I was gaming during the day. 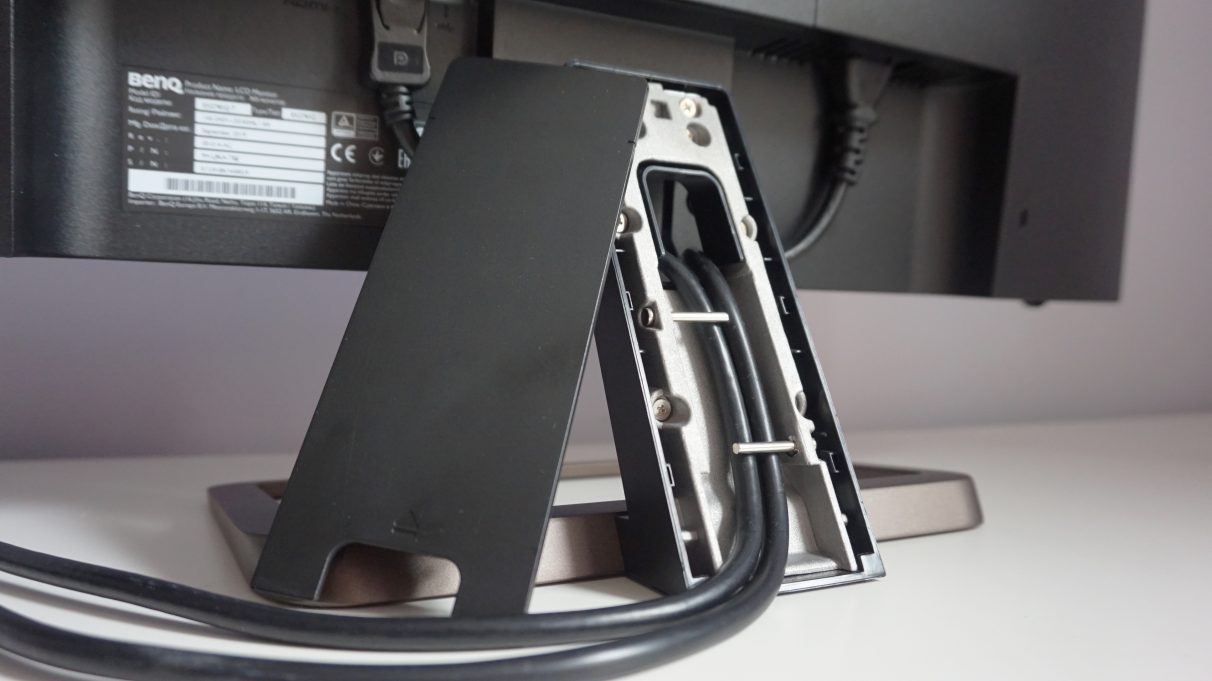 You can remove the rear panel of the BenQ EX2780Q’s stand to help keep your cables nice and tidy.

Its peak brightness level of around 357cd/m2 went some way to help alleviate this, but even messing around with the monitor’s gamma settings didn’t really fix it. Annoyingly, the monitor’s Black Equalizer setting, which can help brighten dark images onscreen, isn’t available on its Standard colour mode, and I had to switch over to one of its overly grainy Gamer modes before I could make use of it.

Still, when I wasn’t playing games set in near-pitch-black environments, the EX2780Q was a fine gaming companion indeed. Colours were lovely and rich thanks to those super high gamut scores, and blacks looked deep and inky.

Its HDR support wasn’t too much of a pain to get working, either, although the strange mixture of certifications this monitor has is a little bit baffling to say the least. It meets VESA’s entry-level DisplayHDR 400 specification, for example (and I did indeed record a peak brightness of around 450cd/m2 when I switched on HDR in Assassin’s Creed Odyssey), but for whatever reason this doesn’t automatically make it an AMD Freesync Premium Pro monitor as well. 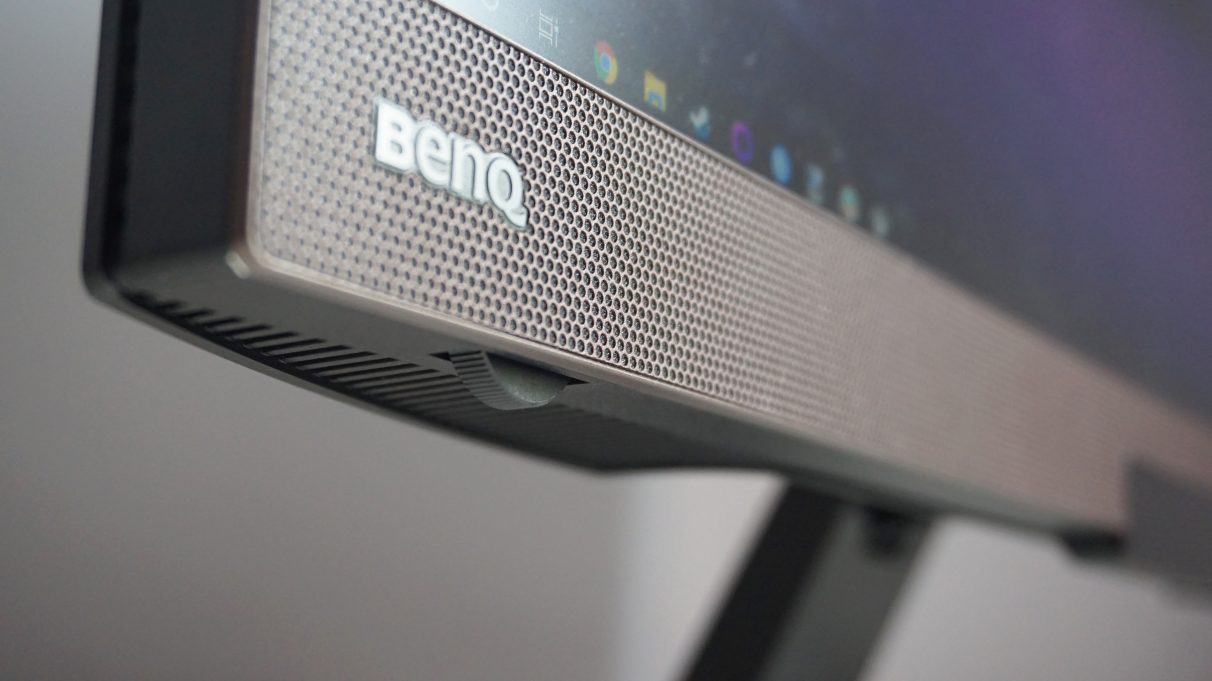 The BenQ EX2780Q comes with a handy volume wheel for controlling its 2.1 channel speakers, but you can also use the bundled remote control to change volume as well.

Instead, it’s just a regular Freesync Premium screen, which means it has AMD’s Low Framerate Compensation tech (LFC) in addition to its usual variable refresh rate support for smooth, tear-free gaming. Indeed, all LFC does is expand the normal frame rate range in where Freesync kicks in, allowing you to make use of it at lower frame rates (hence the name) than normal Freesync monitors.

To become a Freesync Premium Pro monitor, you need all that plus support for HDR and low latency across the board, regardless of whether you’re in HDR or SDR. I can only imagine that the BenQ EX2780Q must fall down in some way when it comes to the latency side of things, but I certainly didn’t have a problem with it during the course of my testing. If anything, games felt just as responsive and smooth as every other gaming monitor I’ve tested, so I wouldn’t let any of this put you off.

Still, the main thing is that its HDR support worked pretty smoothly. When I booted up Assassin’s Creed, it immediately recognised it as an HDR capable display and I didn’t need to spend ages adjusting the settings to get a good picture. Other games, such as Final Fantasy XV, required me to switch on Windows 10’s HDR settings before boot-up in order to fiddle with the in-game HDR settings, but this is pretty common across all HDR monitors. 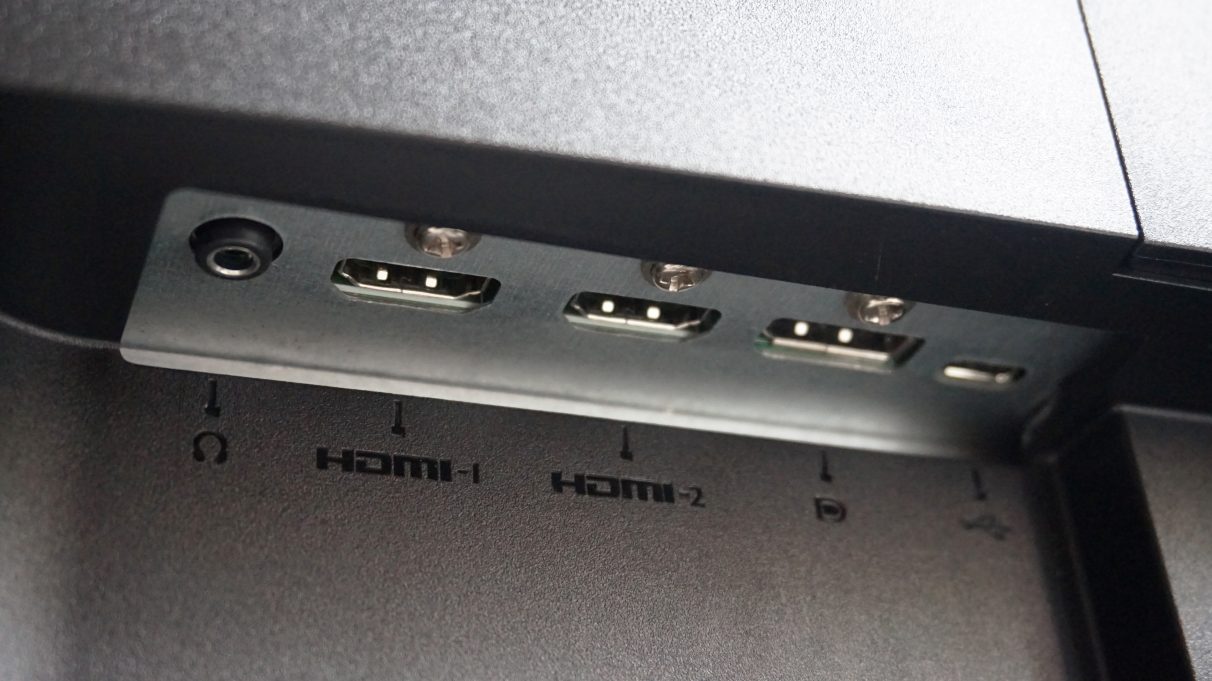 You get a decent range of display inputs with the BenQ EX2780Q, including two HDMI 2.0 inputs, one DisplayPort 1.4, a USB-C port and a 3.5mm headphone jack.

As for the impact of the monitor’s HDR, that was decidedly more hit and miss. Assassin’s Creed Odyssey saw a noticeable lift in both colour reproduction and overall brightness, but Final Fantasy XV looked nigh on identical with or without it. Colours didn’t pop in the same way as Assassin’s Creed, and bright areas of the screen such as street lamps and the sun didn’t benefit from that extra 100cd/m2 of brightness you get by switching on its HDR mode either.

Admittedly, this isn’t so much a flaw of the EX2780Q as it is all DisplayHDR 400 monitors in general. HDR isn’t just about a vivid, expanded colour gamut, after all. It’s also about an increased luminance range, and a peak brightness of 450cd/m2 just isn’t really enough to really make this aspect of HDR sing. After all, there are plenty of non-HDR monitors that can hit that kind of brightness level anyway, so it’s not like 450cd/m2 is particularly special in the first place. Instead, to really appreciate the full whack of HDR, you need to invest in a higher HDR specification – and to get the same degree of HDR as high-end TVs these days, you really need a monitor with a VESA DisplayHDR 1000 badge.

Naturally, these monitors are phenomenally expensive, much more so than a 1000cd/m2 TV, and you just don’t get this kind of HDR spec on a £425 / $450-odd gaming screen. As a result, nearly all 1440p gaming monitors these days simply make do with the entry-level DisplayHDR 400 standard instead. It’s not necessarily a bad thing, but you’re only really getting half of the HDR experience as a result. Rich colours are lovely, but it’s the brightness part of HDR that really makes the difference in my eyes (literally and figuratively), so it’s just something to bear in mind if you’re hoping for an all-singing, all-dancing HDR screen. 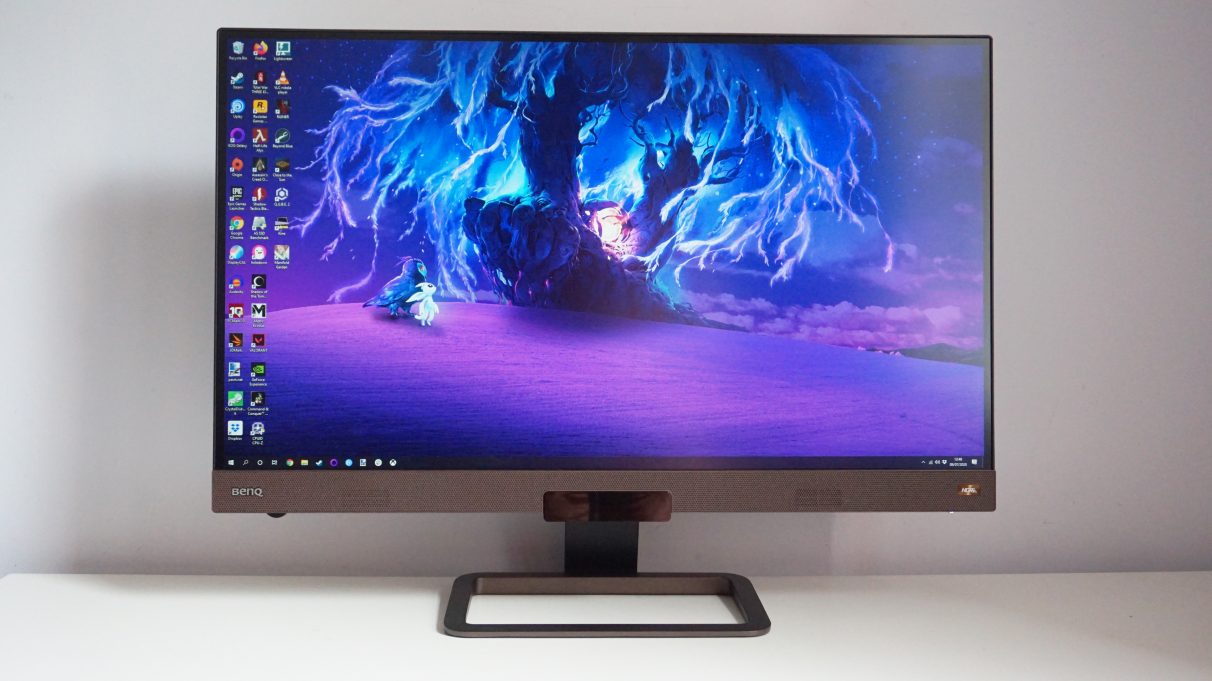 The BenQ EX2780Q’s ambient light sensor on the front of the monitor can automatically detect your room’s lighting conditions and adjust the screen’s colour temperature accordingly, helping to reduce eye strain. It also has a manual low blue light filter mode in the settings, as well as lots of other eye care options in the onboard menu.

On a more positive note, my testing shows the BenQ EX2780Q’s Freesync tech works perfectly well with AMD and Nvidia graphics cards alike, despite not being one of Nvidia’s officially certified G-Sync Compatible monitors yet. I didn’t see any of the visual defects that can sometimes occur on monitors that don’t pass Nvidia’s various tests, such as flickering, blinking, pulsating or off-colours when playing games, so you should be able to make use of the monitor’s variable refresh rate tech regardless of what kind of graphics card you have.

Is it worth buying over the AOC Agon AG273QX or MSI Optix MAG272CQR, though? Personally, I think I’d still prefer to have the £430 AOC on my desk, if only because you get that height-adjustable stand and a higher 165Hz refresh rate. I also reckon the AOC’s speakers offer mildly better sound quality than the BenQ’s 2.1 channel system, although both still can’t compete with either a proper gaming headset or a pair of dedicated speakers. The BenQ’s speakers do a decent job if you really have nothing else, but the sound can get quite muddy at higher volumes.

The BenQ does, at least, have the extra virtue of being in stock for our friends in the US, which sadly isn’t the case for the AOC at time of writing, but even then I’d be tempted by the similarly priced £396 / $400 MSI Optix MAG272CQR, if only again for that height-adjustable stand and 165Hz refresh rate. It’s not a proper HDR display, all told, but as I mentioned above, DisplayHDR 400 screens are a little underwhelming in this department anyway, so you’re not really losing much here.

Still, if you’re absolutely adamant about having a flat screen that doesn’t have a shred of RGB lighting on it, then the BenQ EX2780Q is still a very worthwhile choice. Its panel is excellent, it has a wide range of ports and it plays nicely with all types of graphics cards. If it were a smidge cheaper it would be a great budget option, but for now, it still plays second (or third) fiddle to the AOC Agon AG273QX.

Remember, to get the best prices on today’s best gaming monitors, make sure you check our regularly updated Gaming monitor deals hub for all the latest and greatest bargains.