Ooblets is what it looks like. That can be a bit of a cop out as descriptions go, but I saw almost no footage of it before guessing it was a cross between a Harvest Moon farming/fix-up-the-town game and a Pokémon-style monster collector, and so it is.

But while both those types of game tend to soak up days of my life and leave me with powerful grinder’s remorse, Ooblets feels less insidious than either. Time was going by a lot faster than I’d realised, but not in the mindless haze of repetition or chasing numbers. It’s a good time. 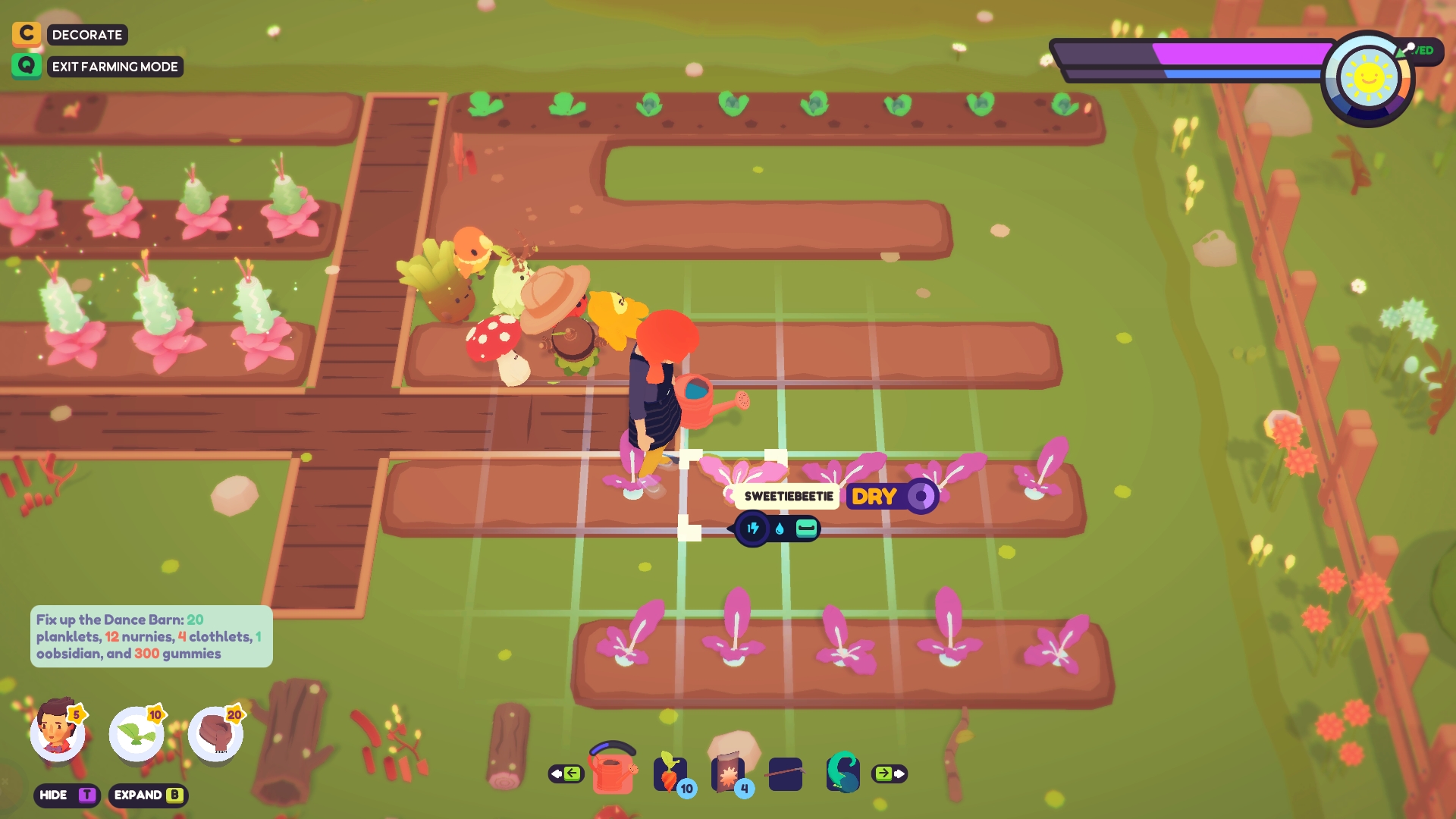 The idea is simple, and in many ways, it works like you probably expect. You’ve come to a new land and been immediately greeted by the mayor, who gives you a run down farmhouse, invites you to join a local ooblet club, and asks for help putting old buildings and town services back together. Most importantly, you also get your first ooblet, which is a cute little shin-high creature that loves dancing. You’ve a limited time and energy each day to prepare and tend crops, explore the town (mostly this means picking free things off the ground and talking people until they’re your friend), and collect more ooblets.

It’s incredibly generous with all of it. There’s more than enough time to get lots done, plentiful food items to replenish your energy, and you have no costs aside from buying seeds, some of which are exceedingly cheap. You’d have to be trying extremely hard to fail, and although much of your earnings come from the usual routine of clearing and tilling land, planting and watering seeds, and then selling the produce to the local shop, you’re showered with money and rewards for just about everything. 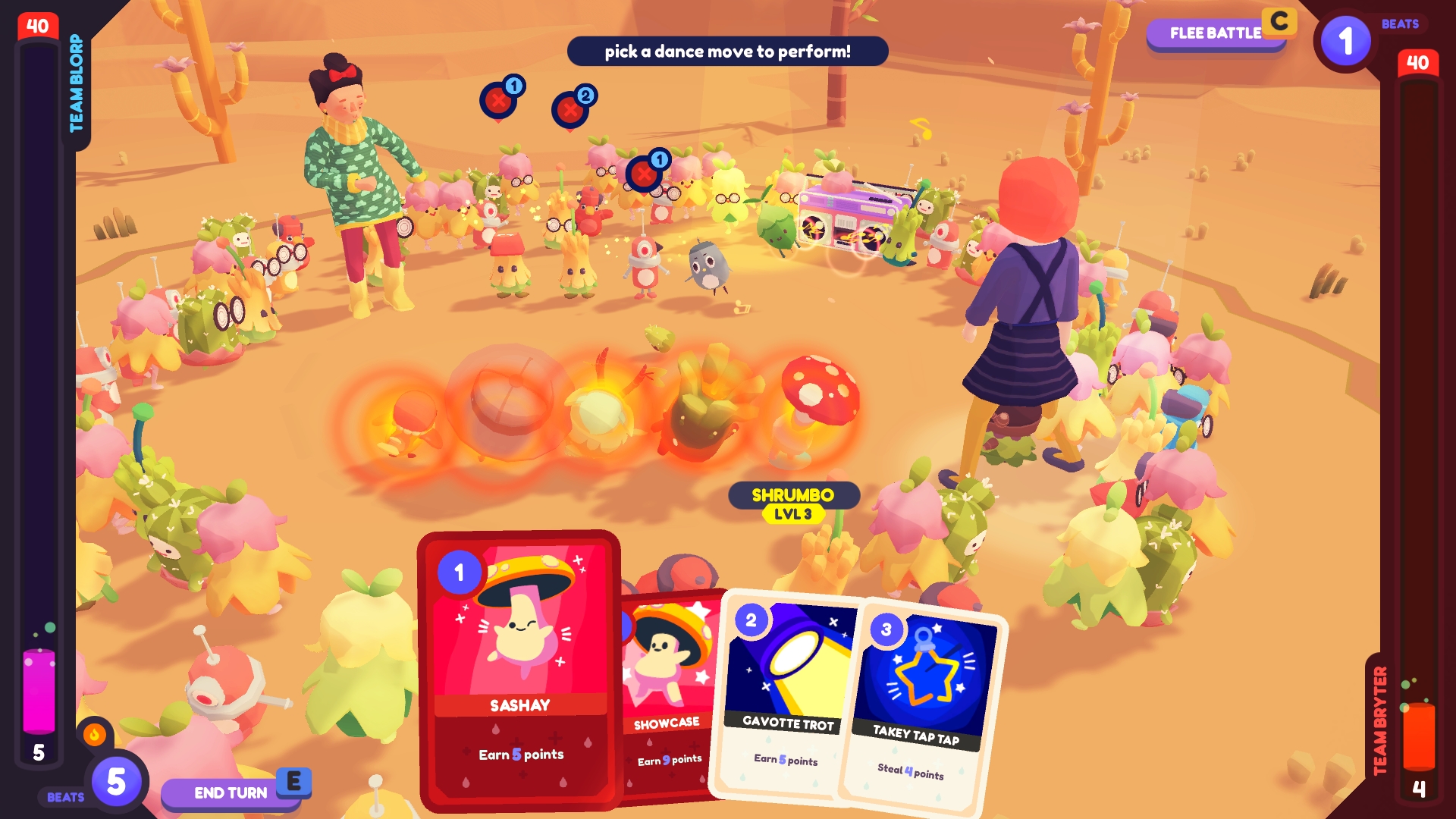 The ooblets are too tiny for the dance moves to really look like much but a bit of wiggling and jumping.

This type of farming game is often a chore by design, bordering on a skinner box. Pokémon, too, has its grinding, and while there’s not exactly a dark underbelly unless you think about it too hard, it’s a series about jerk children fighting proxy wars through captive animals. I’d have assumed that taking the meanness out of the equation would leave the whole thing feeling a bit pointless and one-note, but Ooblets slots the farming in its place instead. It’s not particularly complicated, but it’s a clever little combination that avoids the worst habits of both genres, and gives a sense of variety. Even if it’s only because you’ve always got the option to take a break from ooblet “fights” to farm, or walk away from the farm to add to your collection. 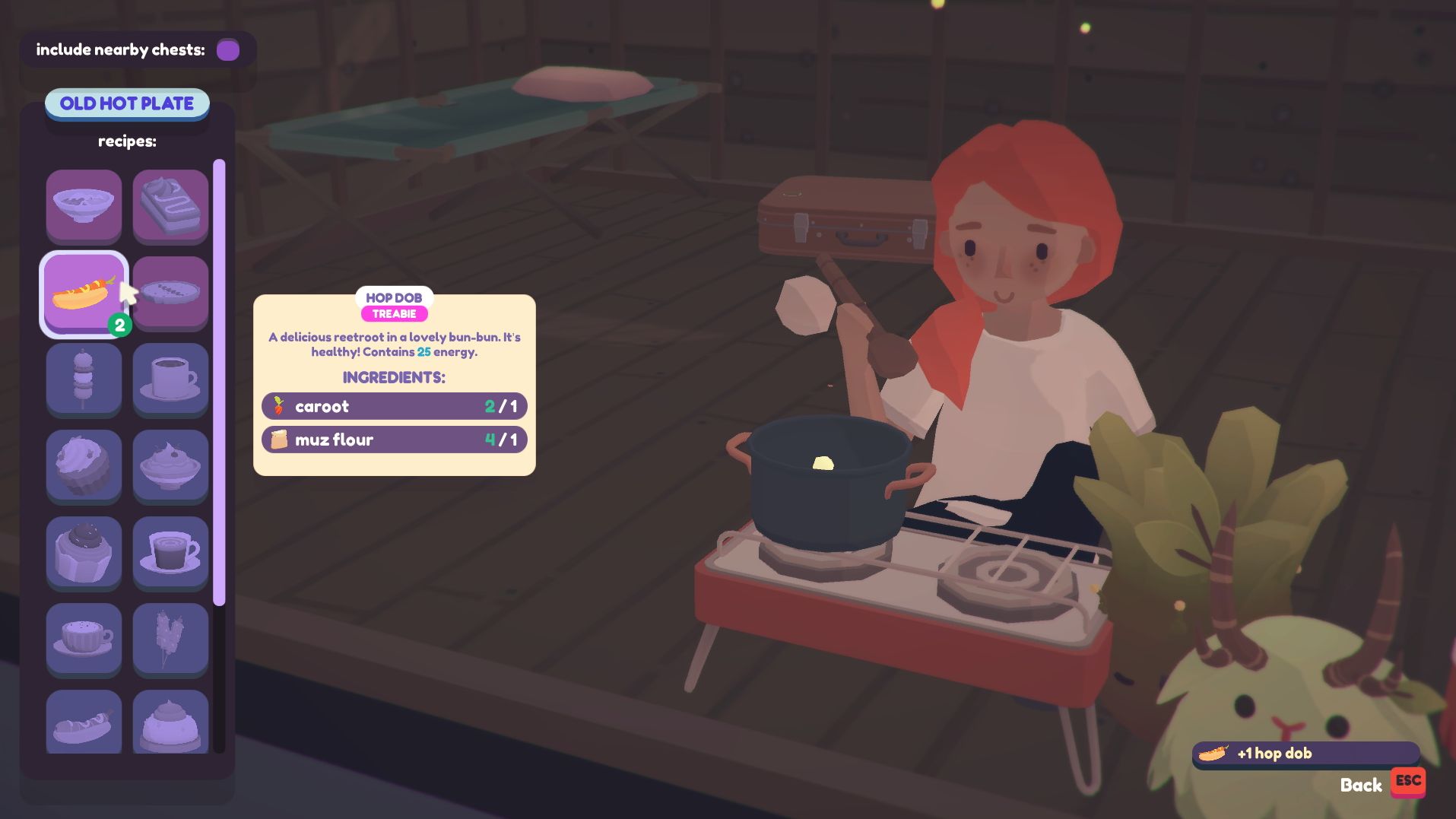 I neglected cooking terribly. Silly, since you can sell food, use it for more energy, or give it to certain villagers.

I put “fights” in quotation marks there, because one of Ooblets’s headline cutesy features is that your little beasties throw shapes in place of punches. All the town’s problems can be solved by donating resources or having your ooblets dance it out. Your little clutch of tiny friends follow you round, and when you accept some jobs, they’ll line up for a fight in which the goal is to win a set number of points before the other team.

This is done with a card game that’s almost, but not really, a deckbuilder. Hands are drawn randomly from your deck, but you don’t have to worry about collecting cards or obsess over numbers. Your ooblets each add their own dance moves to your deck, with some being good point earners, others better at making the other team nervous, lowering the points their moves generate. Some outright steal opponents’ points, and others hype up the crowd so your other dance moves score more. 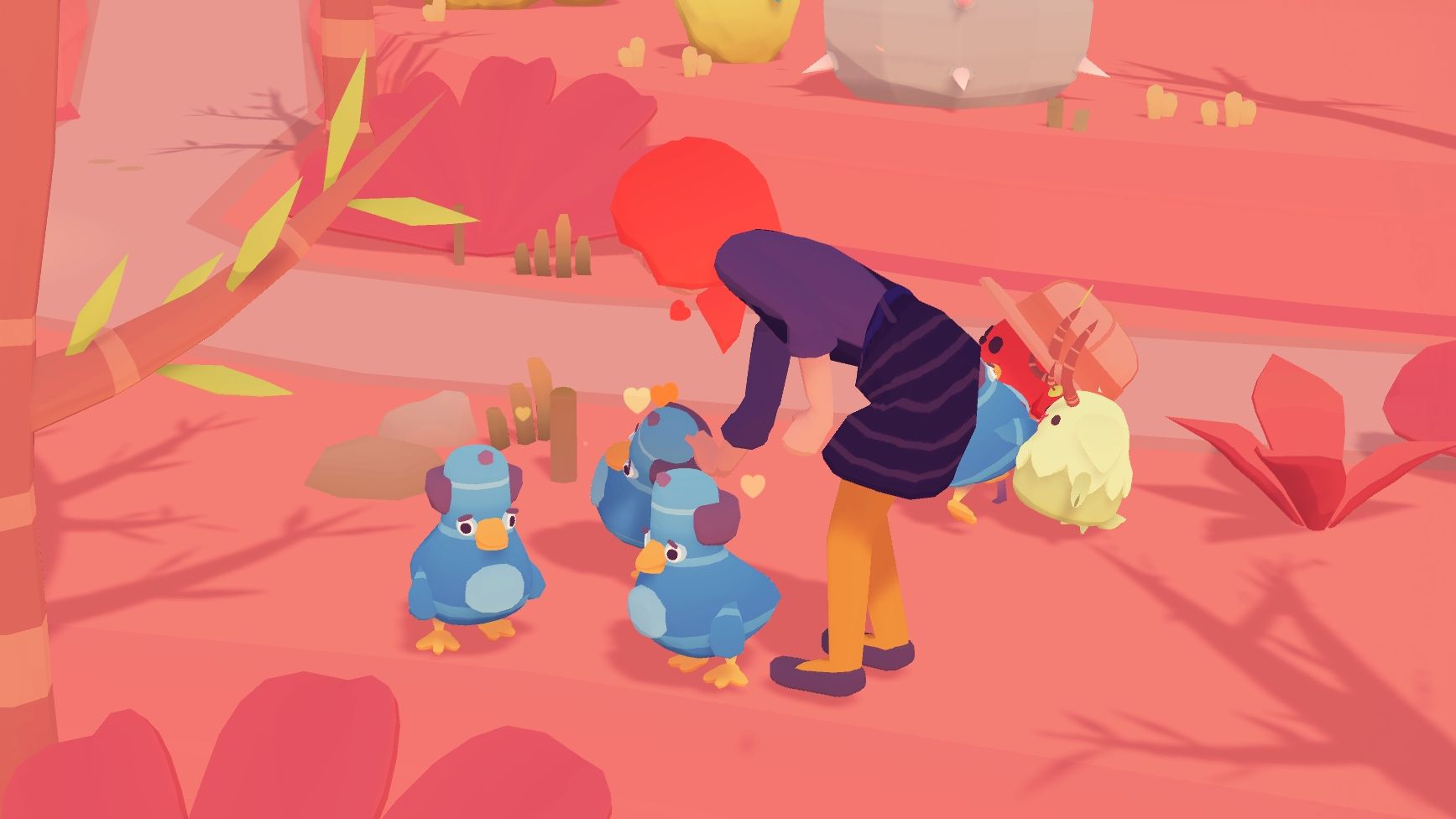 You can pet any wild ooblets around town. When you win a badge, the mayor’s asssitant runs all the way across town to beak-deliver it.

When you travel to new areas of the island, you meet more complicated dancers and strategies, but it remains very low pressure and frankly it’s hard to lose. The AI is not yet able to handle advanced moves and often hamstrings itself with them. But this is okay! Perhaps there’ll be more difficult bits later during its early access period, or harsher difficulty settings – but I wouldn’t be surprised if there aren’t. It’s not meant to be difficult, because it’s more about the joy of collecting and capering about with your ooblets than about becoming more powerful.

When you win a dance-off, you reassure the opposing dancers that they did well, and optionally, pet them so that they fart out a seed, which you can plant at your farm to grow your own new ooblet. It is all super cute. Practically everything in Ooblets has a near toddlerish name. One of my tasks was to deliver 20 nurnies to the gotsaplop for some gummies. If I feed a frontywun to the dumbirb the mayor will give me 10 wishies. I need to find more seaplops, quibs, and a sporbet for the lernery, and I only made up one of those words. Instead of “to fish” you say “to sea-dangle”, and my favourite villager has a “printypress”. 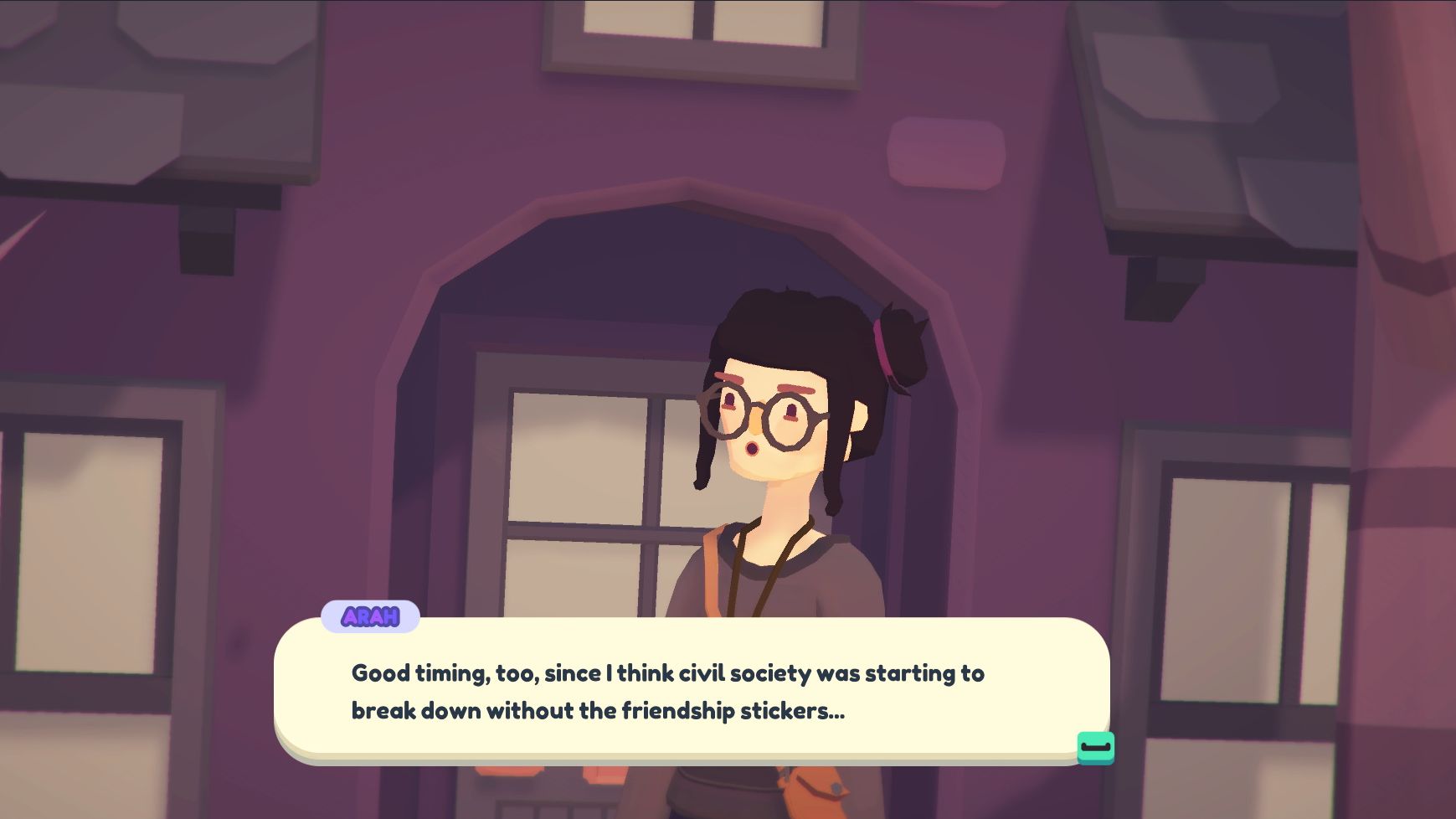 Arah is my favourite but I think she already has a gf :(

I’m sure if I’d read about it before playing, this would sound unbearable. But it falls short of being too much by the narrowest margin, because it’s so warm with it. It never feels smug or simpering. It’s never particularly funny, nor is there anything really subversive to give it some bite, but it’s self-aware enough to be a tiny bit arch. A villager might complain that the government doesn’t want you to have fun, but they’re more likely to compliment your shoes or encourage you to take your time and not stress about hurrying through the game or making money.

A shop worker sometimes cheerily hints that she’s going out of business. The mayor’s day is mostly taken up with her weird and awkward dancing in the town square instead of fixing anything, and someone asks for help recovering some stolen items, explaining that “I don’t like confrontation, so I was waiting until someone else came along to do it for me”. It’s a knowingly odd place, but not one that’s trying too hard to prove it. 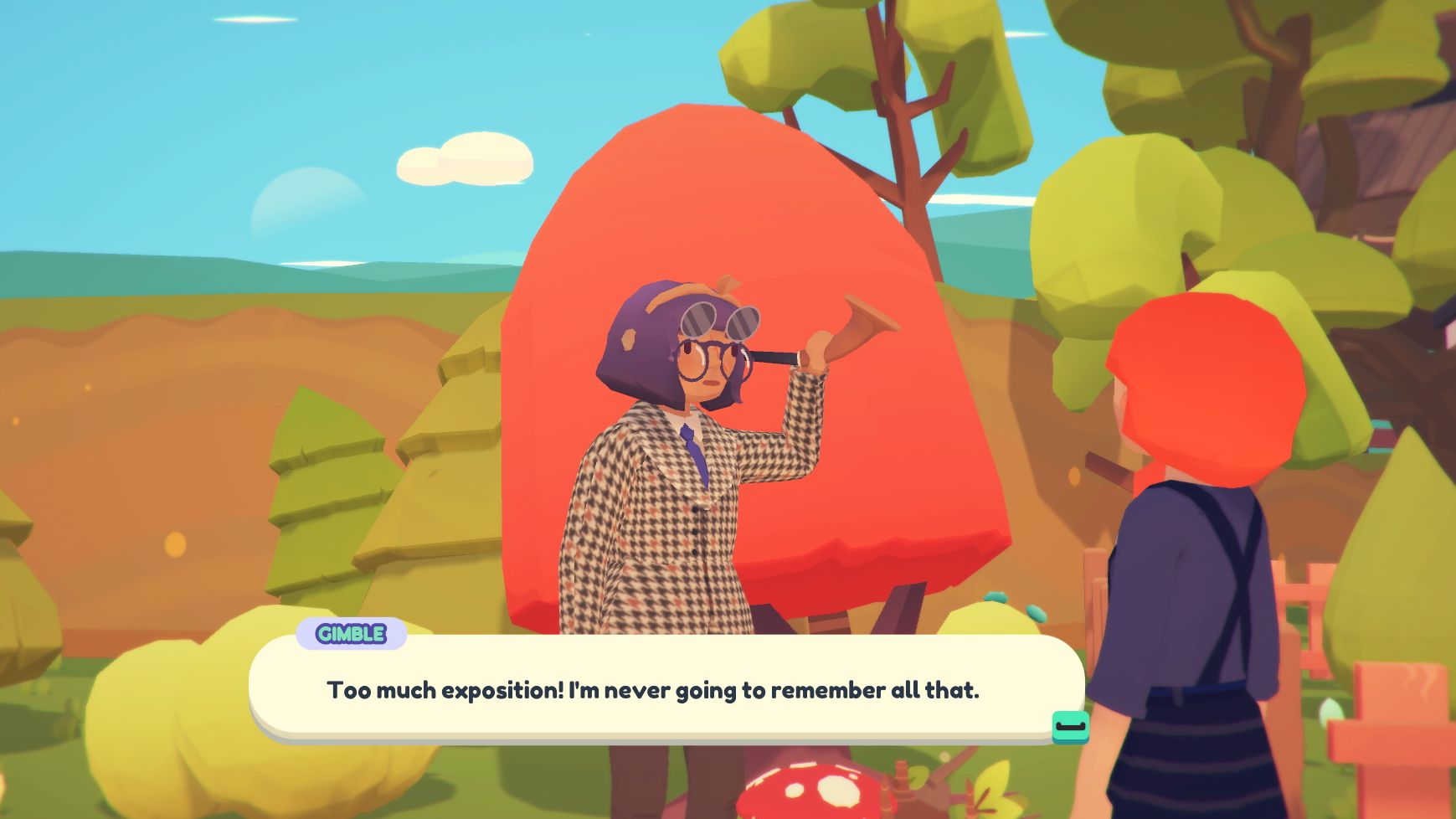 Not every game needs outright conflict, but a tiny pinch can go a long way.

It’s tricky to get across just how gentle and pleasant Ooblets is without it sounding saccharine and insubstantial, like a sack of candyfloss. But it’s more of a sponge cake. It’s light and fluffy, but tasty and filling nonetheless. You’ll find the time flying by, but it never reaches the worryingly compulsive level that I’d feared. I don’t think it will become as all-consuming as Pokémon or Stardew Valley, but I don’t think it wants or needs to either.

Oh, and you can give your ooblets little hats.