When I first tested Death Stranding’s DLSS 2.0 tech in the run-up to the game’s release, I wasn’t able to show you what it actually looked like. I could tell you that switching it on would turn any RTX card into a 4K 60fps machine, but not how its clever, AI-driven upscaling wizardry affected the in-game visuals. Well, now I can, and as you’ll soon be able to see for yourself, there is precisely… wait, which ones were my DLSS screenshots again?

DLSS, in case you’ve forgotten because there are so few playable DLSS games right now, stands for Deep Learning Super Sampling, and it’s one of Nvidia’s exclusive RTX features. It’s a nifty bit of upscaling tech that uses AI to fill in the gaps when you’re playing at high resolutions such as 4K, helping to keep those frame rates nice and high without tanking your GPU’s performance. The game should look the same as it does with DLSS turned off, but it run better as a result.

The first iteration of DLSS we saw in Final Fantasy XV did a decent job of constructing the game’s vast environments without rendering each and every pixel, but a closer inspection revealed some slightly muddy looking textures off toward the horizon. 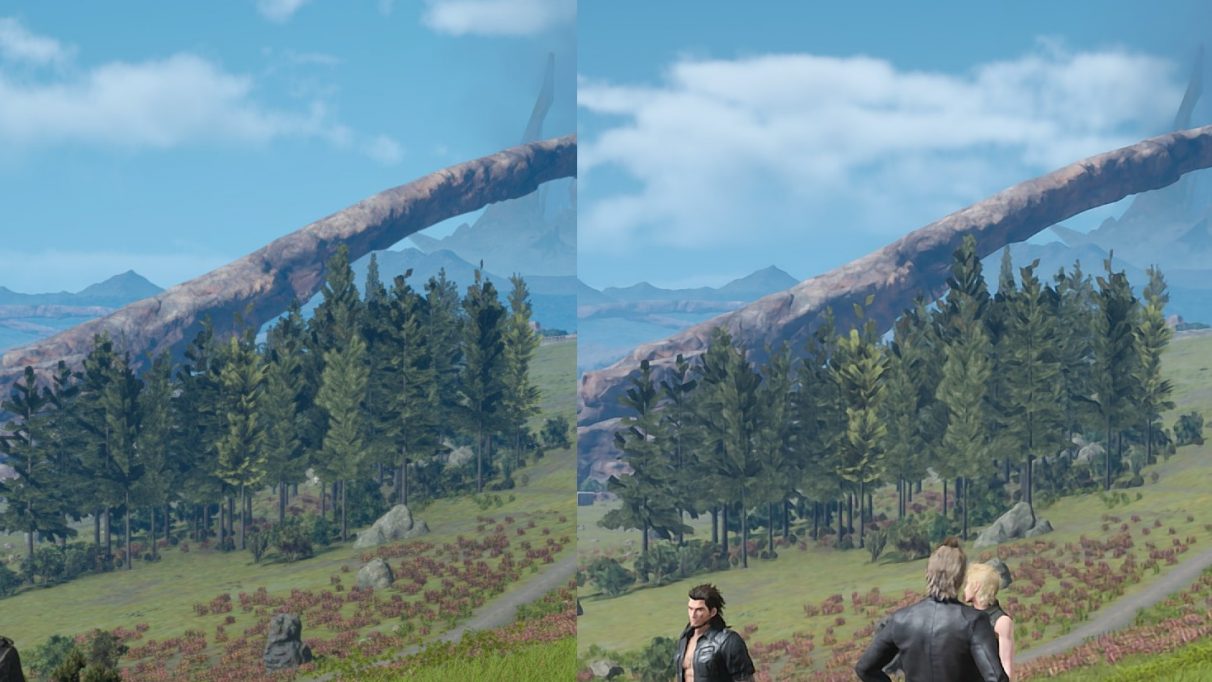 Final Fantasy XV’s DLSS tech looked fine in motion, but look too closely and you’ll see where it’s doing its AI guesswork. On the left is a close-up of the horizon in native 4K, while the right is the same scene with DLSS enabled (click to enlarge).

Since then, Nvidia have refined their DLSS tech and launched DLSS 2.0 in August of last year. DLSS 2.0 is a lot faster than its previous incarnation, and Nvidia have somehow got it to a point where it can produce images that are comparable to their native resolution originals but which only render between 25-50% of the pixels, which is pretty mad. It’s also a bit more flexible than before, too, giving players the options to choose between Quality, Balanced and Performance modes that control the game’s internal rendering resolution.

There still aren’t many games that utilise this newer form of DLSS – Death Stranding is one of the first, along with Control, Wolfenstein Youngblood, Mechwarriors 5 and Deliver Us The Moon – but as you can see from my Death Stranding images below (click to enlarge), it’s definitely got a heck of a lot better since it first came out. 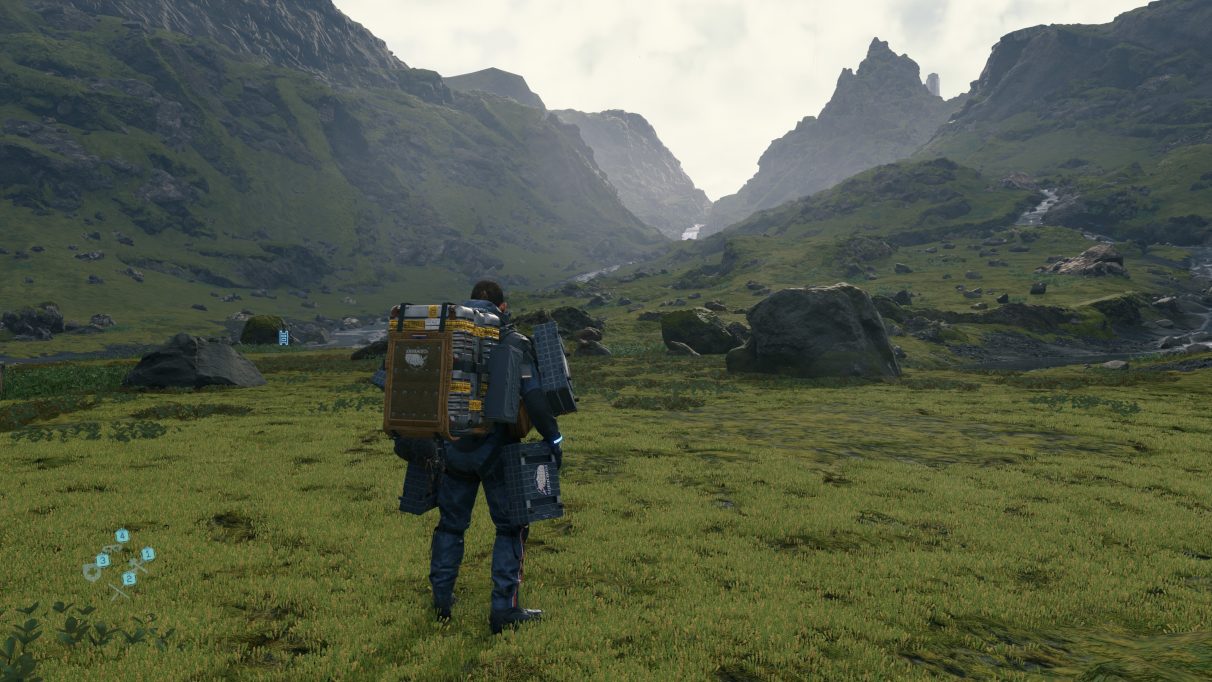 Death Stranding at 4K on Very High, with DLSS off. 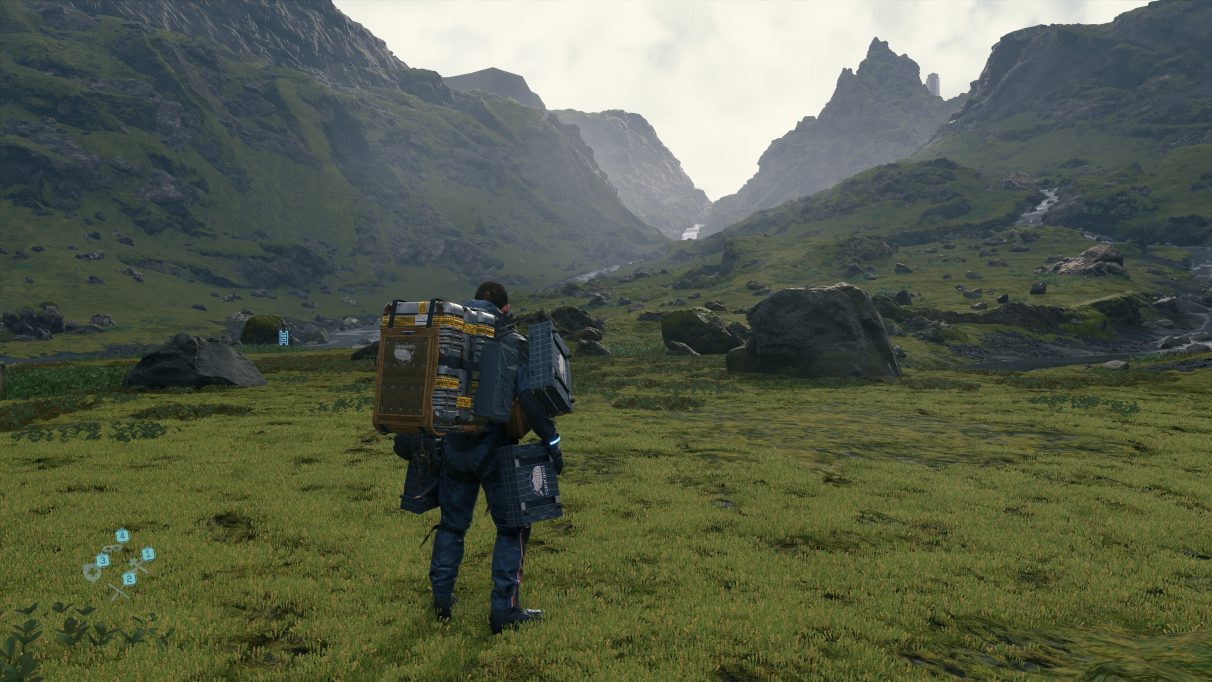 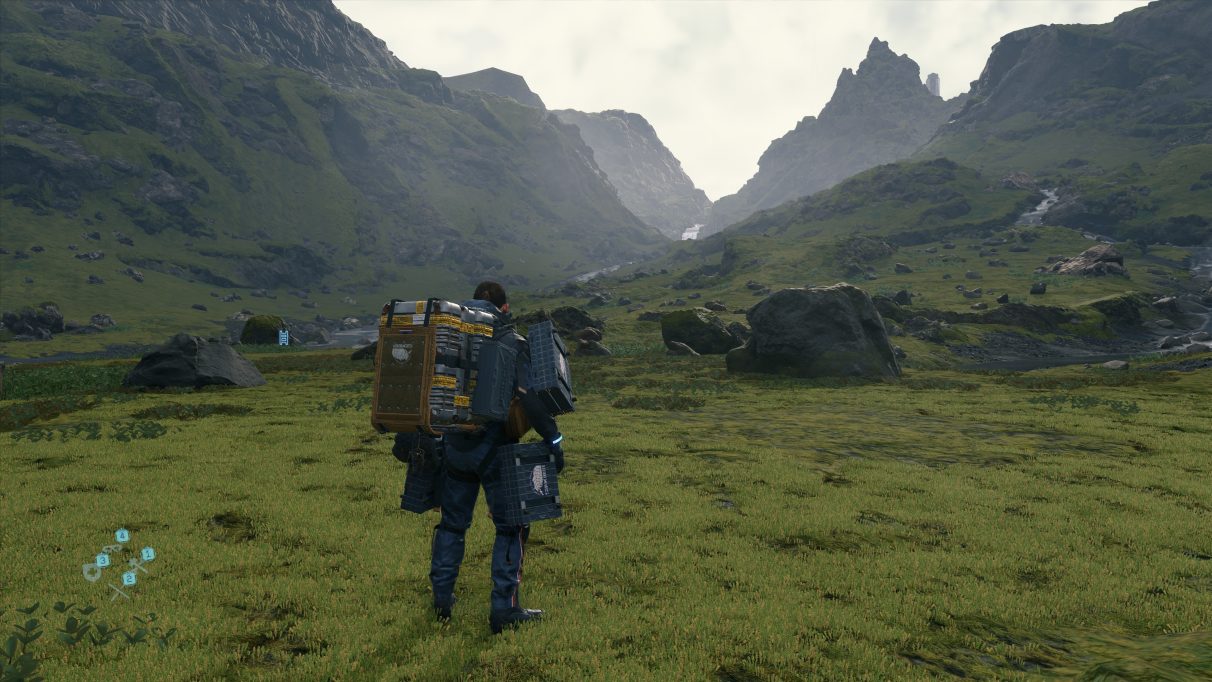 I swear those are three different images, honest.

Even zoomed in, there’s very little difference between them, which is pretty impressive. The rocks all look equally sharp and detailed to my eyes, there’s no discernible difference in the quality of its shadows or lighting, and the grassy hillside looks just as verdant and full of vegetation, too.

The only real flaw between DLSS and no DLSS, at least as far as I’m able to tell anyway, is that the stream in the top right corner is a bit more detailed in its native state, showing clearer ripples and waves as the water tumbles down the hillside. But man alive, I think I’d be hard-pushed to spot that without zooming right in like I’ve done below, and it’s definitely a huge improvement compared to Final Fantasy XV’s version of it. 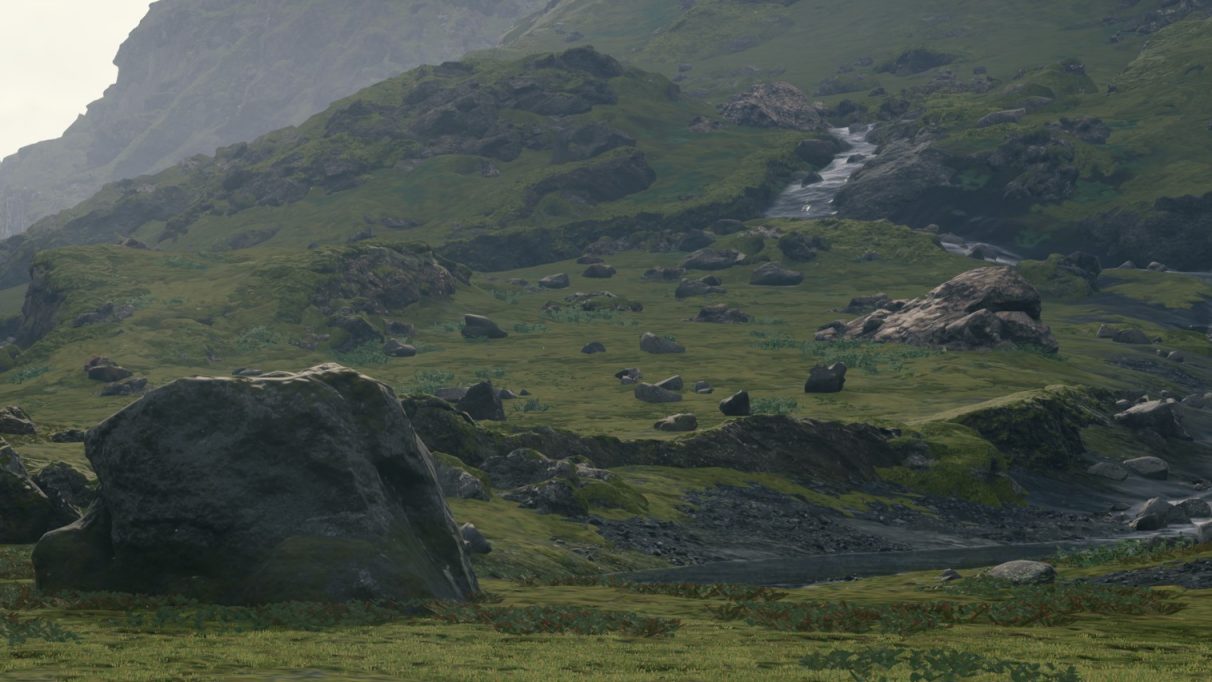 DLSS off zoomed in. 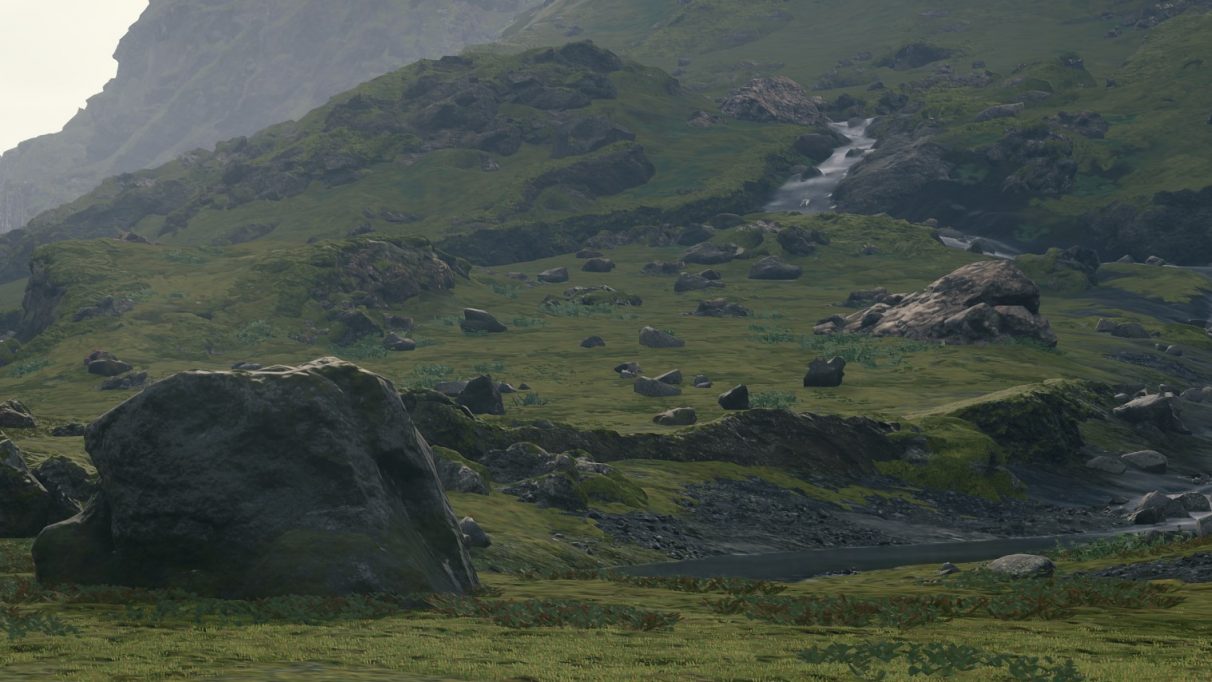 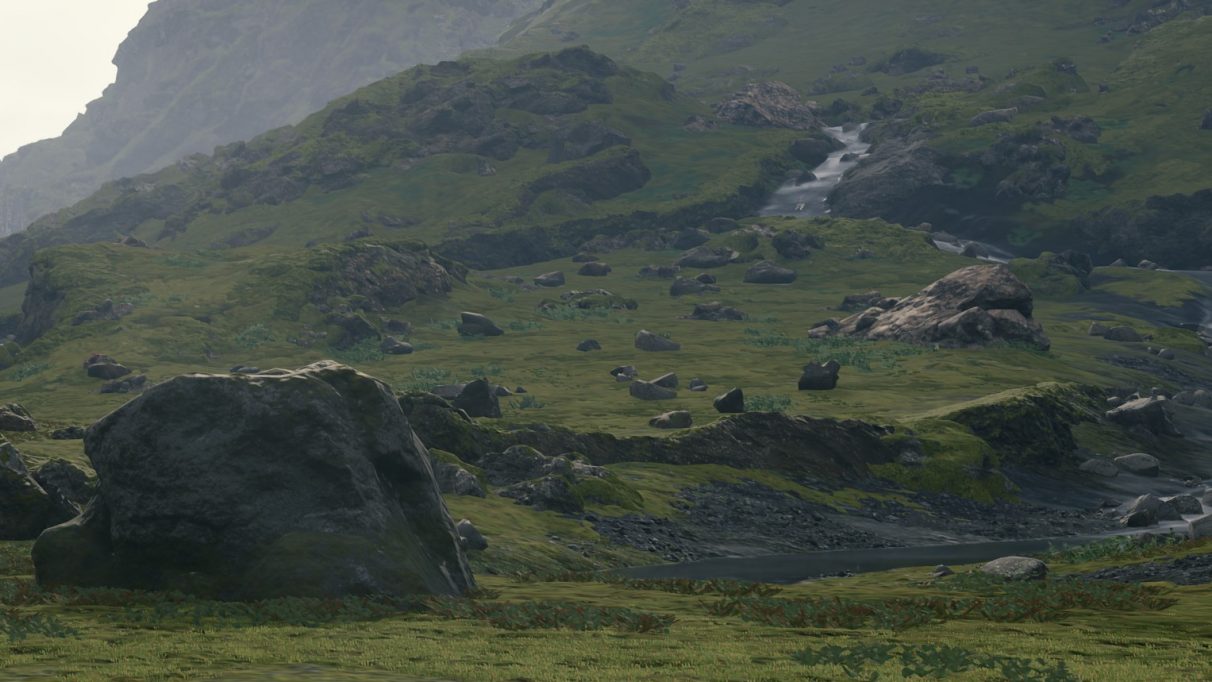 So yeah, if you’ve got an RTX card, you’d be nuts not to turn on Death Stranding’s DLSS setting and enjoy those higher frame rates. Without DLSS, for example, my RTX 2070 Super was hitting a decent average of around 55fps on Very High at 4K, but there were moments during some of the cutscenes where it became a bit juddery somewhere in the low 40s. With DLSS Quality mode, that average frame rate jumped to around 75fps, while Performance saw it shoot up to just over 90fps. All while producing a nigh-on identical image, too.

You don’t necessarily need an RTX card to enjoy smooth frame rates in Death Stranding, though, as the game runs beautifully even on a GTX 1060 at 1920×1080. For more info on how it runs, head on over to my Death Stranding PC performance article.

Tagged with 505 Games, graphics cards, Hardware, how much graphics does it have, Kojima Productions, Nvidia, Nvidia RTX, Death Stranding.