If you see the name “Menelaus” and find yourself scratching your head over how to pronounce it, then have no fear: play any more than eight seconds of A Total War Saga: Troy, and you will never forget. That’s because the extremely bellowy king of Sparta can’t seem to take a breath without hollering his own name on the exhalation. He’s like an incredibly angry Pokémon. In fairness, though, he’s very cross, because noted Trojan sex enthusiast Paris has run away to the other side of the Med with his wife Helen, and the whole incident has made him look a right boafus. Cue the Trojan War.

Just as my first go at Troy saw me play a battle built on the feud between bronze age miseryboys Achilles and Hector, this second demo, which allowed me four hours to guzzle down as much campaign play as I could, focused on the even more cataclysmic beef between Menelaus and Paris. I got to play a good chunk of game with each of them, but Menelaus got the lion’s share of time. And while my inner roleplayer wanted to really get into the sandals of this insecure, shouting Greek fight aficionado, it transpired that the real joy to be had was in playing him as a sort of cheeky, opportunistic rock salesman.

Straight off the bat, it’s fair to say that Troy doesn’t do a huge amount to reinvent the classic Total War formula. And that’s fine. I don’t think anyone particularly wanted it to, to be honest. By and large, it feels like a sort of “best of” compilation of features from both Warhammer 2 and Three Kingdoms, with a cracking visual and narrative identity all of its own. And while four hours of Total War is never enough time for long-term irritations to show their heads, I can honestly say there wasn’t a single aspect of the game’s design that struck me as an obvious dud move.

It’s also a lot bigger than I was expecting, with a campaign map covering a huge sprawl of the Eastern Mediterranean, on a scale where islands I honestly couldn’t place on a map had multiple territories apiece. When I asked game director Maya Georgieva just how big the map was, she said it was on par with the massive Mortal Empires map you can play on by stitching together the maps from the two Warhammer games, and that’s… pretty big. So if you had the impression that the “saga” part of the game’s name implied it was a sort of Total War Lite, you’ll be pleasantly surprised.

But though Troy doesn’t depart massively from formula, it’s worth pointing out that the innovations it has made are generally both welcome and highly noticeable in play. The best new trick was the implementation of five resources – food, wood, stone, bronze and gold – to replace the classic single “moneys” resource in previous games. It might not sound a sexy feature, but if you like resource management your tummy will be tickled, and it adds a new layer of consideration to fold into strategic decision-making. 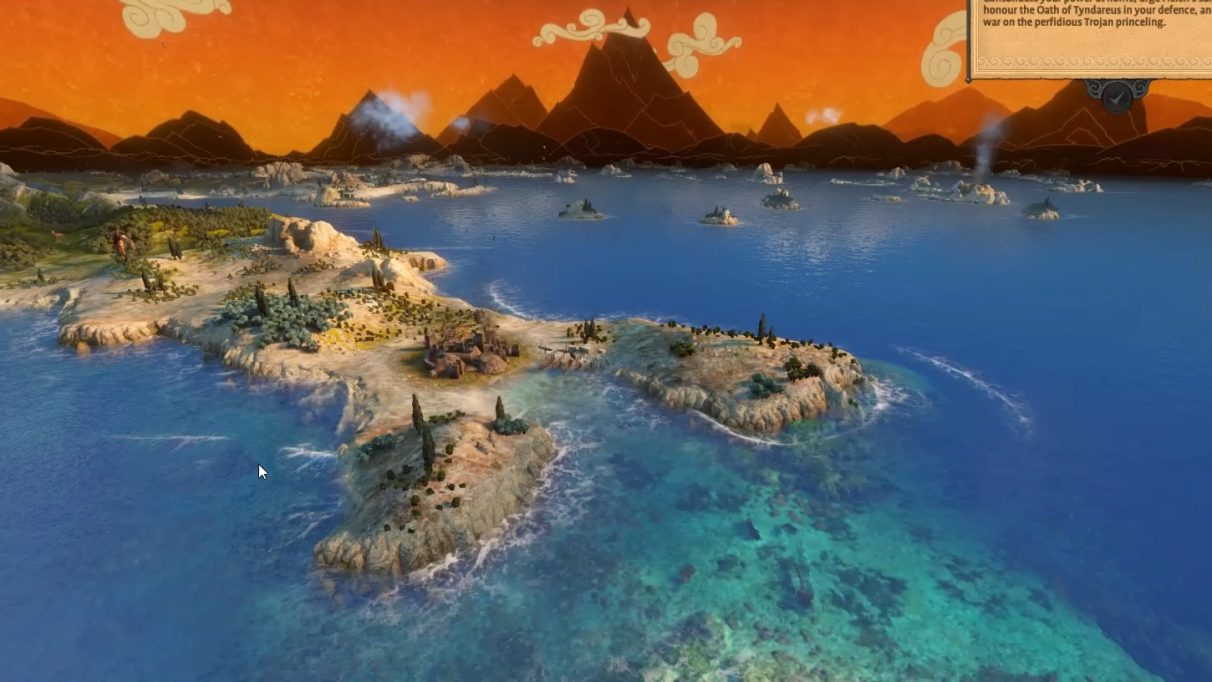 I just wanted you to know how hard I had to resist including a screenshot of Sparta, with the deadpan factual caption “this is Sparta”.

For example, every settlement on the map now has a main resource it focuses on collecting, factoring heavily into your decisions about where to invade next. If you’ve not got enough food to feed your fightmen, for example (troop upkeep costs food, making it most analogous to normal TW cash), you might decide to beeline neighbouring breadbasket territories, even if they’re held by tougher opponents than nearby mining settlements that you don’t particularly need.

Alternatively, you can do what my crafty Menelaus did and become a quarry magnate, fending off the enormous food bill from your hungry hungry hoplites by selling gigatonnes of stone to other kings in exchange for wheat. It felt great, to be honest; like I’d genuinely found an alternative route out of a bind, and that the alliances that had made it possible actually meant something, rather than being arbitrary, fragile technicalities.

And there’s the thing – the new resources don’t just add a resource management element to the game. They make bartering with neighbours vital, in a design decision Georgieva said reflected the importance of trade in the Bronze Age. And sure enough, resource-swapping made diplomacy feel like a far more useful tool than it has done in the series to date. Sure, it had a bit of Settlers Of Catan’s “wheat for ore?” energy at times. And the AI did propose some bloody odd bargains, with that joker Ajax in particular asking me for free money more often than a Twitter ko.fi grifter. At one point, an ally offered to trade actual territories with me, which barely ever happens in strategy games. But apparently these are known issues, arising from the fact part of the system was lifted from Three Kingdoms, and the hope is that they’ll be ironed out in time for launch next month.

Of course, for diplomacy, and particularly trade, to work, you need to have a decent number of people to trade with. Strategy gaming’s all-too-common scenario, of being surrounded by psychotic bastards with nothing to offer you except ways to die, would make Troy unplayably frustrating. And that brings me to the game’s second major innovation, which is harder to define neatly, as it’s more of an increasing lean towards story-driven play, than something strictly new. 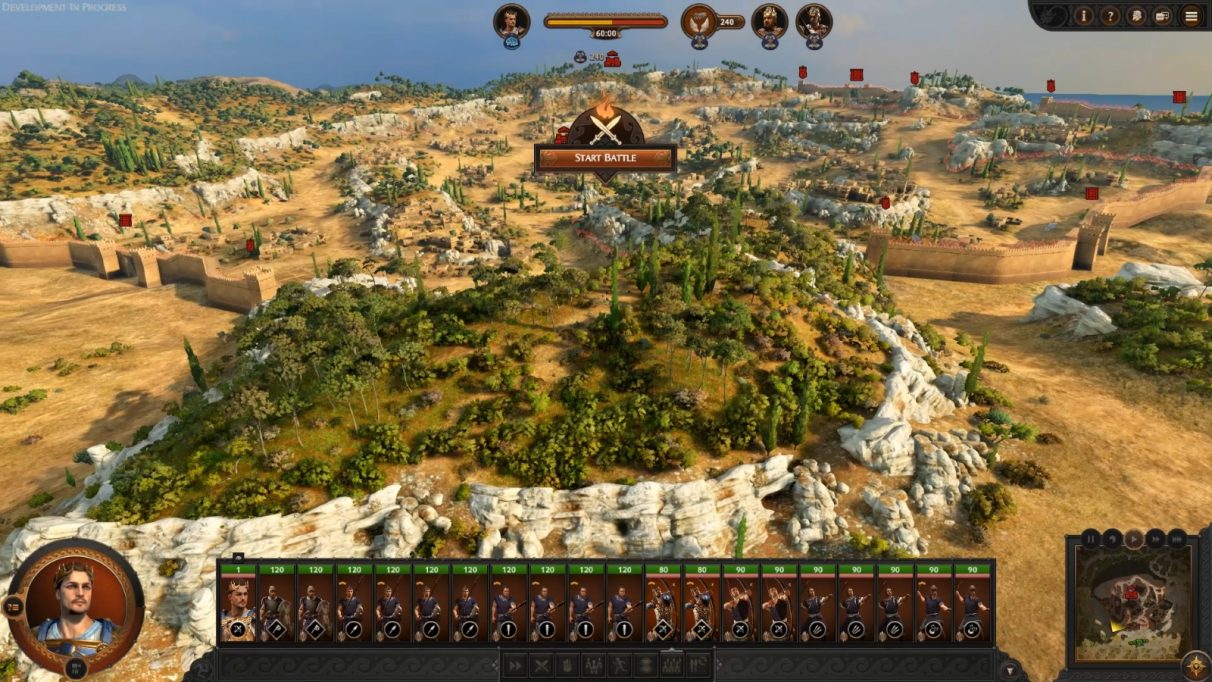 It’s so good to see 360 degree siege battles back in Total War, and although I’ve only played a couple, Troy’s were as tactically interesting as they were gorgeous to look at. But then, in a game named after arguably the most famous siege in history, you’d hope the sieges would be good.

From the campaign’s painted-pottery skybox to the Homer quotes littered on its loading screens, A Total War Saga: Troy is very much The Iliad: The Game. Genuinely, I think classicists (of the kind who are relaxed enough to deal with mostly-rationalised minotaurs, at least) will properly love it for that. As such, it cleaves pretty closely to the story of said Iliad: most of the factions are directly or loosely allied with the Danaans (i.e. the Greeks) or the Trojans, and shortly after the campaign begins, the Big War will kick off in earnest. At that point, it’s an effort to not fall in with one of the big alliances, and play along with the general flow of Homer’s bonkers story about humans and gods competing to see who can act like the biggest set of dickheads.

Of course, it’s not mandatory. Georgieva stressed her team had made sure from the start that you could play Troy however you wanted, in what she called the “classic Total War sandbox” style. There’s even an option to turn off specific faction goals and play towards a more generic Total War victory, in a development on the flexibility offered by Warhammer’s narrative-driven faction campaigns. But as Georgieva put it, the game’s Homeric story is a bit like a river: it’s not impossible to swim against the current, but it’s easier, and arguably more rewarding due to special events and the like, to go with the literal flow. And of course, independent play objectives are more suited to some faction leaders than others. A rogue Menelaus turning his armies on mainland Greece, for example, would be a bit weird, considering the game starts just as he’s convinced them all to commit everything to a mass assault on another continent for the sake of his marital issues. But hey, it is possible. 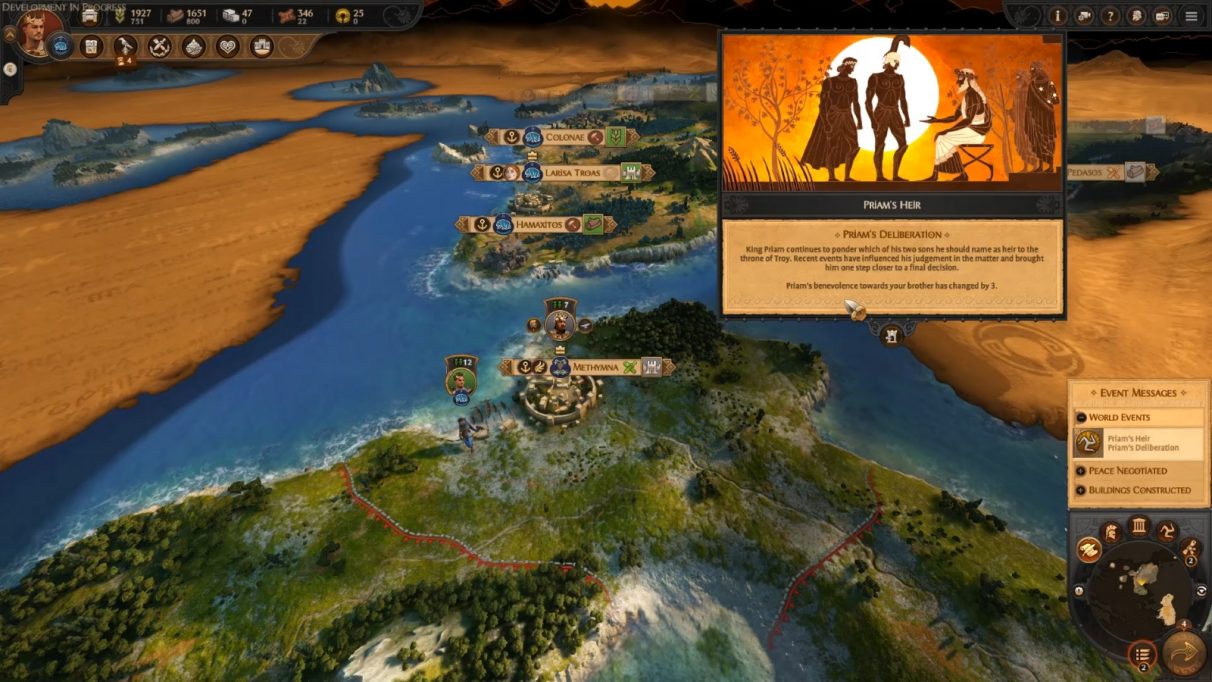 For all that I appreciate the RPG flavour of Paris’ struggle to impress his dad, there’s something hilarious about the inhuman idea of this withered king measuring his love for his sons in points. Imagine getting an email from your dad saying “I am afraid to say my esteem for your big sister has increased by seven points; you must conquer more cities”.

The sense of playing my game parallel to a series of historical cues, or at least semi-mythological ones dressed up as them, sort of put me in mind of Europa Universalis or Crusader Kings 2, where history is there to be bounced off, rather than adhered to. And there was another aspect of Troy, too, which gave off a very Crusader Kingsy feeling – the unique mechanics for each faction. Faction-specific rules are nothing new to Total War, but here they felt less like a set of mild situational advantages, and more fundamentally transformative to strategy.

But more intriguingly, he’s locked in a sort of Faramir/Boromir business with his older brother Hector, where both are being evaluated by their judgemental father King Priam. Hector’s realm is right next to Paris’, and so you spend the early game frantically competing with him to achieve certain objectives, in order to receive highly coveted dadpoints. Earn enough dadpoints by the time Priam pops his clogs, and you’ll be given the original big man itself, the city of Troy, as your inheritance. Lose the race, however, and you’ll be absorbed into the winning brother’s faction. It adds a splendid bit of personality to what might otherwise be a fairly soulless phase of empire-building, as you wait for the Trojan War to kick off in earnest.

There’ll be a lot more to talk about once we see the full game, I’m sure. But for now, I’m seeing a lot of ways Troy could end up delivering an atmospheric, RPG-scented strategy adventure, and very few in which it could trip over itself. Fingers crossed, this should be a good’un.

A Total War Saga: Troy will be moddable via Epic later this month