If you’d told me before today that it’s possible to make an upbeat and friendly 3D platformer based on the works of Franz Kafka without undermining the nature of either, I would have found it hard to believe. And yet here we are.

I’ll confess that it’s been a long while since I’ve read The Metamorphosis, and I never had particularly strong feelings about it (save for borrowing a friend’s: “Why apples? If I was after a giant beetle I’d throw… flaming hot knives”). But it’s clear that Ovid Works love Kafka’s books, and their upcoming Metamorphosis is both a solid game and a creative remix of his ideas.

You play as Gregor Samsa, the put upon salesman of The Metamorphosis, who famously wakes up transformed into a monstrous insect. You see the world through his newly tiny eyes, scuttling about as a life-sized bug of some kind. Unlike the original story, this game isn’t much about Gregor’s misery, and his horrible family are nowhere to be seen. Instead, he immediately wanders off into a surreal adventure that alternates between climbing around ordinary bedrooms and offices from a miniature perspective, and a fantastic underworld of hidden passageways, portals, and a society of formerly human bugs. 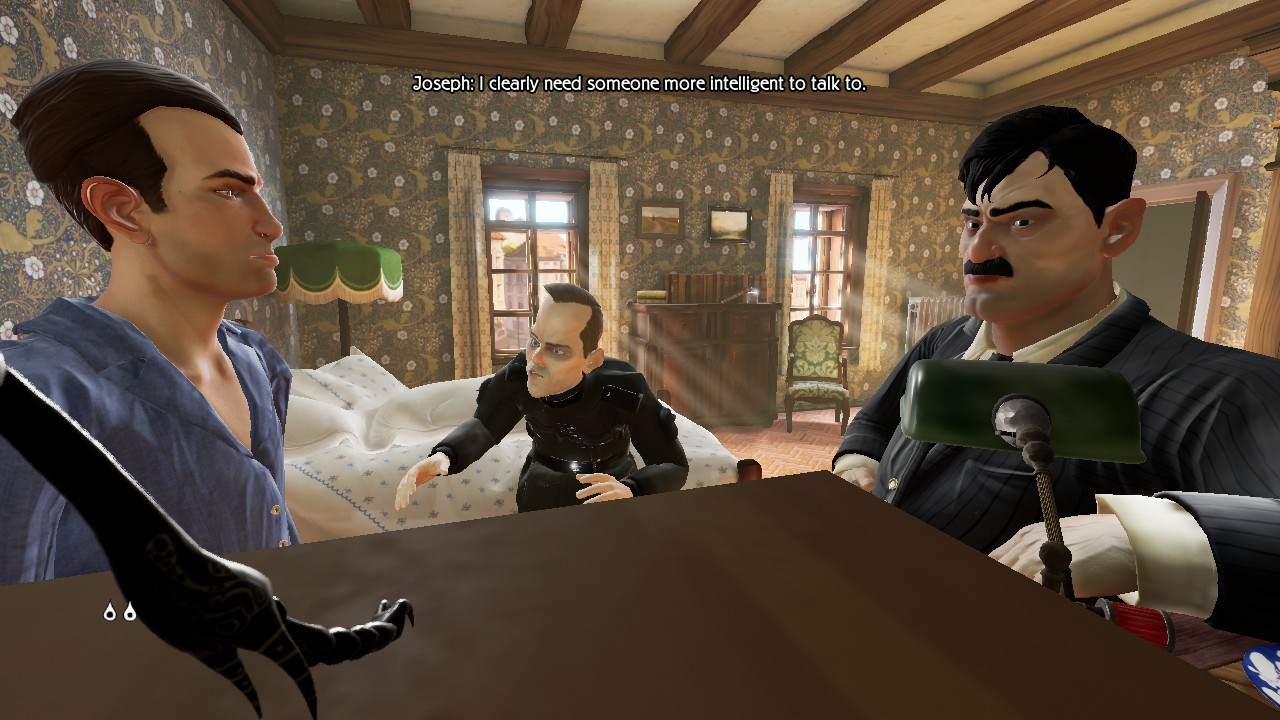 The trouble with critiquing bureaucracy is it can never be as dunderheaded as the real thing.

I know how it sounds. It’s like adapting Oscar Wilde into a war game. But woven into it is the story of Gregor’s friend Joseph K, who is of course caught up in his own nightmare scenario based on Kafka’s The Trial. You almost immediately see the sinister government figure snooping in Joseph’s bedroom while he sleeps, and are tasked with waking him up by clambering onto his alarm clock. A pattern follows in which you witness most of the main beats of his story, while trying to get his attention, help him out, and find your own path through the world to something called the Tower, where it’s promised you can find work, and potentially get your humanity back.

I am honestly amazed at how well it holds all this together. Literary adaptations of games are prone to extremes, either being barely interactive, literal retellings, or pretty much just regular games only tangentially related to the source. Metamorphosis instead takes Kafka’s own blending of the impossible and the depressingly real, and creates its own world with it. It also takes us through a story about the dehumanising nature of working life and the dual monsters of authoritarianism and maddening, pointless bureaucracy (although without the psychosexual aspects of his work, which to be fair would probably be awkward to fit in here). But most of that is sort of in the background, since helping Joseph out usually coincides with your path to solving your own problems anyway. 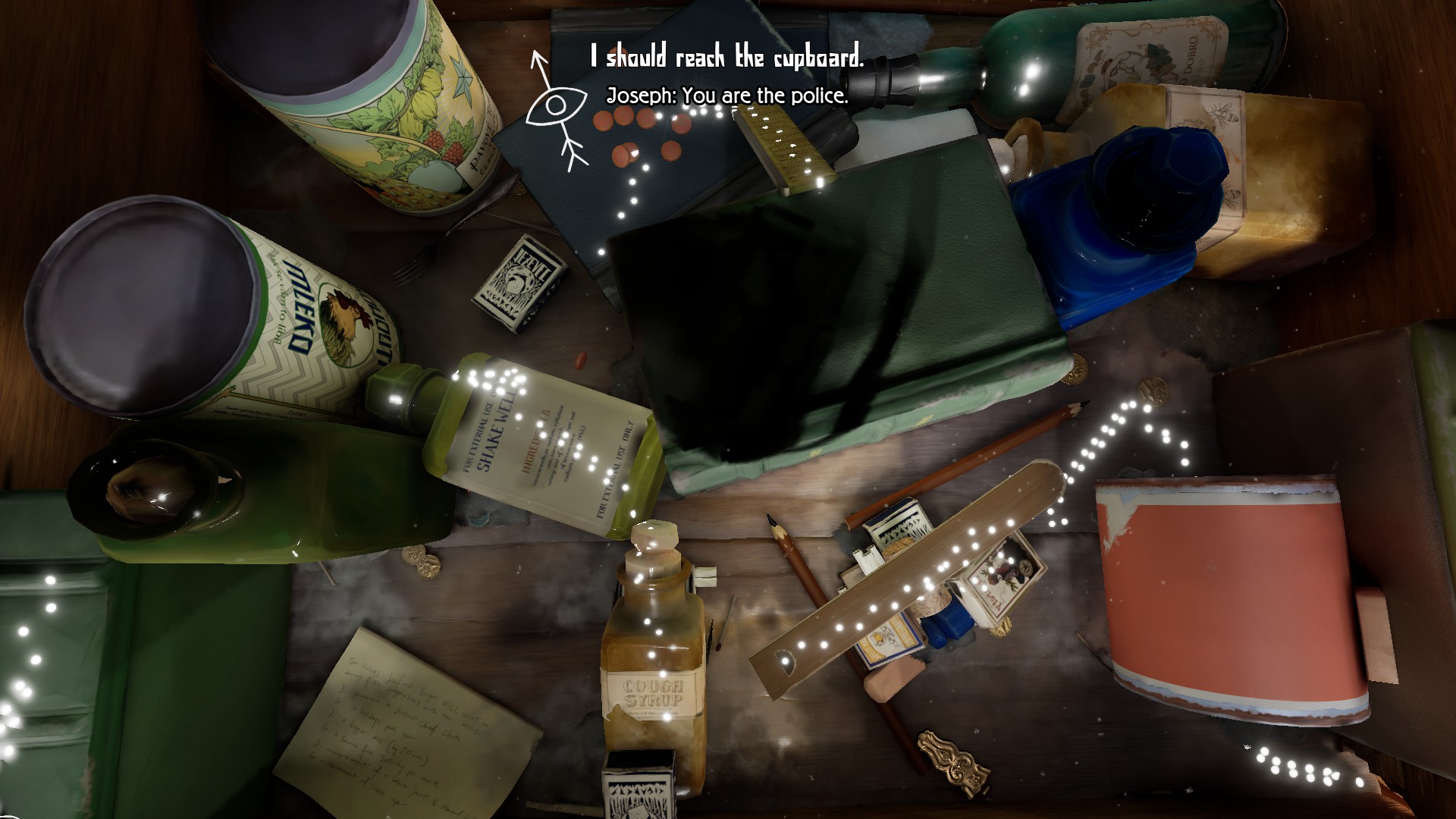 I love the trails you make in this mode. It’s a shame vertical climbing is limited, but it’s generous enough to be forgiven.

You’ll spend a lot of time clattering about on your excellent little bug legs. They’re visible at the edges of your screen when you look slightly down, and will sometimes rest on surfaces in front of you (they also respond to your movement somewhat, making it possible to do the “world’s tiniest violin” gesture, surely deserving some sort of award). They click convincingly as you walk, and even have faint little shadows. I mention all this because the sense of walking around as Bugregor is excellent. It’s a perspective I’ve always wanted to see in games, and although I’ve seen it tried in Bee Simulator and Grounded, Metamorphosis does it the best.

It must be difficult to make levels like this. Every piece of furniture in a regular 3D game is a natural end point. But when you’re the size of a thumbnail, suddenly everything is accessible. That one bookcase is now a level unto itself, with dozens of objects in, and players will be disappointed at every crevice they can’t fit in, every surface they can’t climb. There are of course limits to this game, and it’s very linear. Notably, you can only climb walls for a limited (though quite generous) distance, powered by dipping your feet in sticky substances, but this is possible more often than not, and the results make simple navigation entertaining in itself.

I enjoyed running up to the fingertips of the laywer during his conversation with Joseph, only for him to reach for his pipe, putting them impossibly far away. It’s fun being so beneath notice, but the best parts were yet to come. Behind the human world, see, are the hidden tunnels connecting these scenes. It’s not just the unique perspective on regular things. Splintered drawers hide secret worlds full of mushrooms and grumbling bug people, who have their own officious habits and political rumblings. 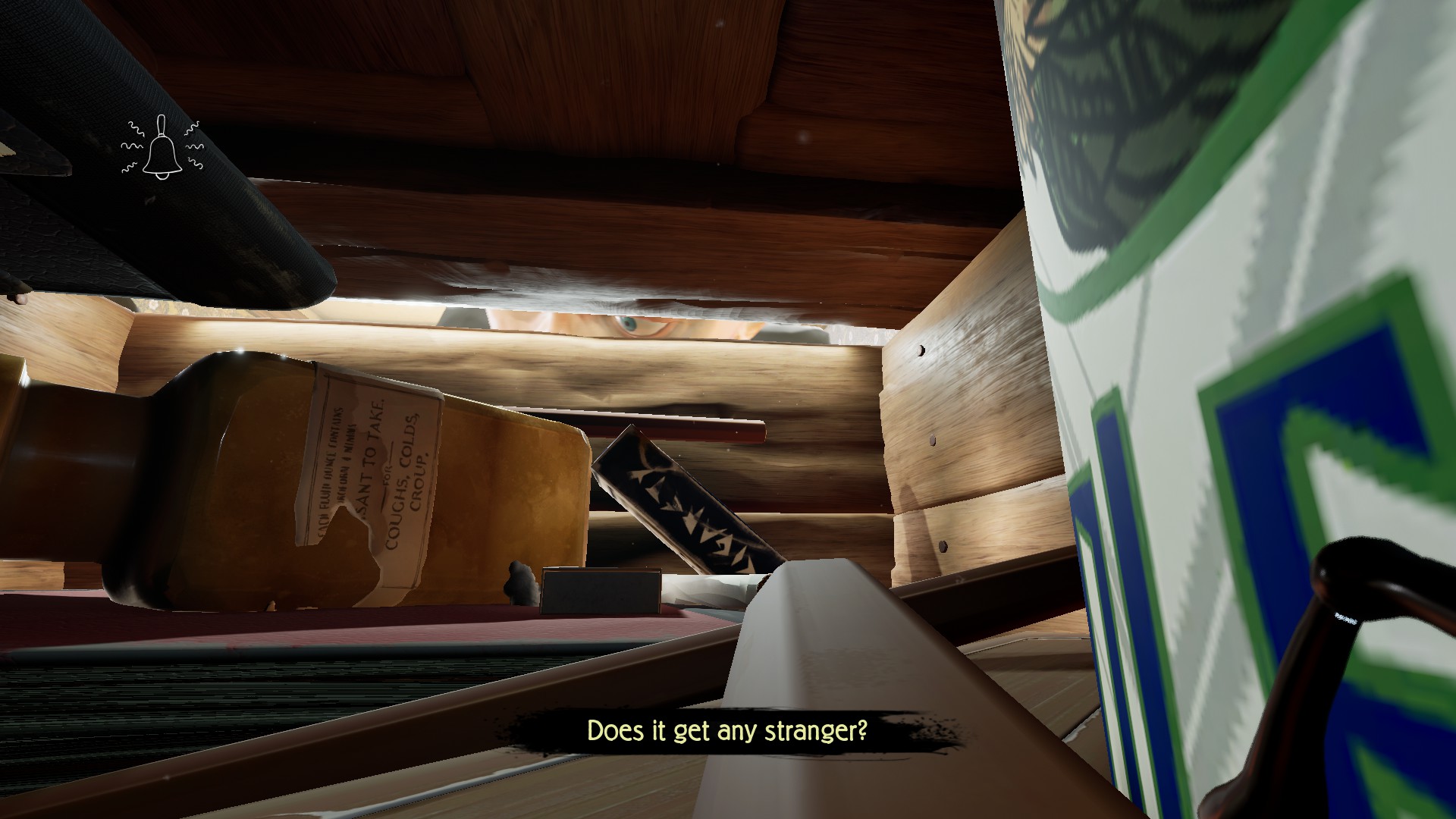 Although formerly human, the other bugs make little mention of that, although they are aware of, and apparently interact with human society in hidden, unexplained ways. It’s not initially telegraphed whether the Tower you’re driven towards is the source of your plight, a mirror of corrupt human governments, or an alternative to them. You’re asked early on for your papers, a seemingly absurd requirement in a world of sentient minibeasts, but the people here are more helpful and candid, even if there seems to be something sinister about their very existence. What’s abundantly clear is that for Joseph, the paperwork, the procedures and the laws are artifice. The cruelty is the point. Little Gregor thinks he can help, but it’s more likely his efforts are as futile as Joseph’s.

Despite this all, Metamorphosis is a joy to play. It’s oddly cheerful, with an upbeat, if faintly cursed sountrack reminiscent of a less insufferable Danny Elfman. The obviously evil secret police types at the start, and humans in general, are a little too cartoonish to be threatening, but the menace comes from the situation they represent than the men themselves. Gregor’s warping voice quickly moves from horrific to an inoffensive insectoid gargle, and his rapid acceptance of the situation partly echoes his hopeless meekness from the book, but here serves more to simply bypass the prolonged scenes of shock and disbelief that, in a game, simply aren’t necessary, because we’ve already accepted his fate by the time we’ve got to the start menu. 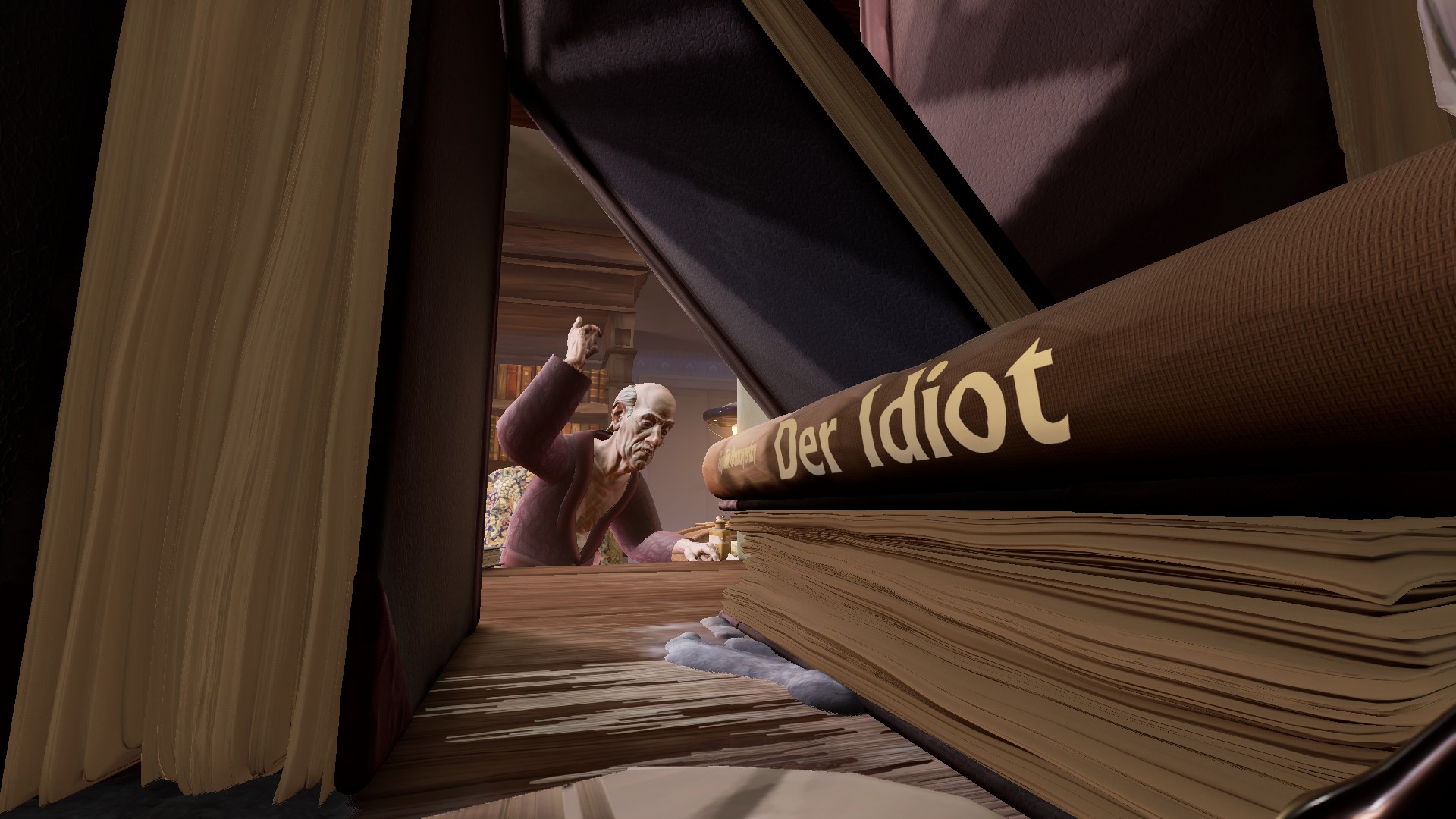 Myshkin wasn’t an “idiot” in the modern sense, but the original, slur sense. Huld here is more a banal blockhead than… well anyway I always preferred Dostoyevsky. Sorry Franz.

The environments are great too, and its puzzles and navigational challenges are simple without feeling like a waste of time. Typically you’ll be fixing or breaking things by climbing on them or turning dials with your feet, nothing complicated, but nothing intrusive or laborious either. There’s no “find the three keys” here, and if you’re ever lost or confused, a press of the tab button zooms out to show the local area, with your objectives marked and a neat little set of glowing beetle tracks to mark everywhere you’ve walked.

There’s a slight clinging effect from your legs, making jumps forgiving and falling far uncommon, but even if you die (typically by falling to the floor), the restarts are instant and rarely set you back more than a few moments. Hazards like fire and water are forgiving too, tending to take a few seconds to kill you if you don’t move away. I particularly love a later section, where any otherwise lethal drop is interrupted, and you’re gently, seamlessly deposited on a stable surface instead. 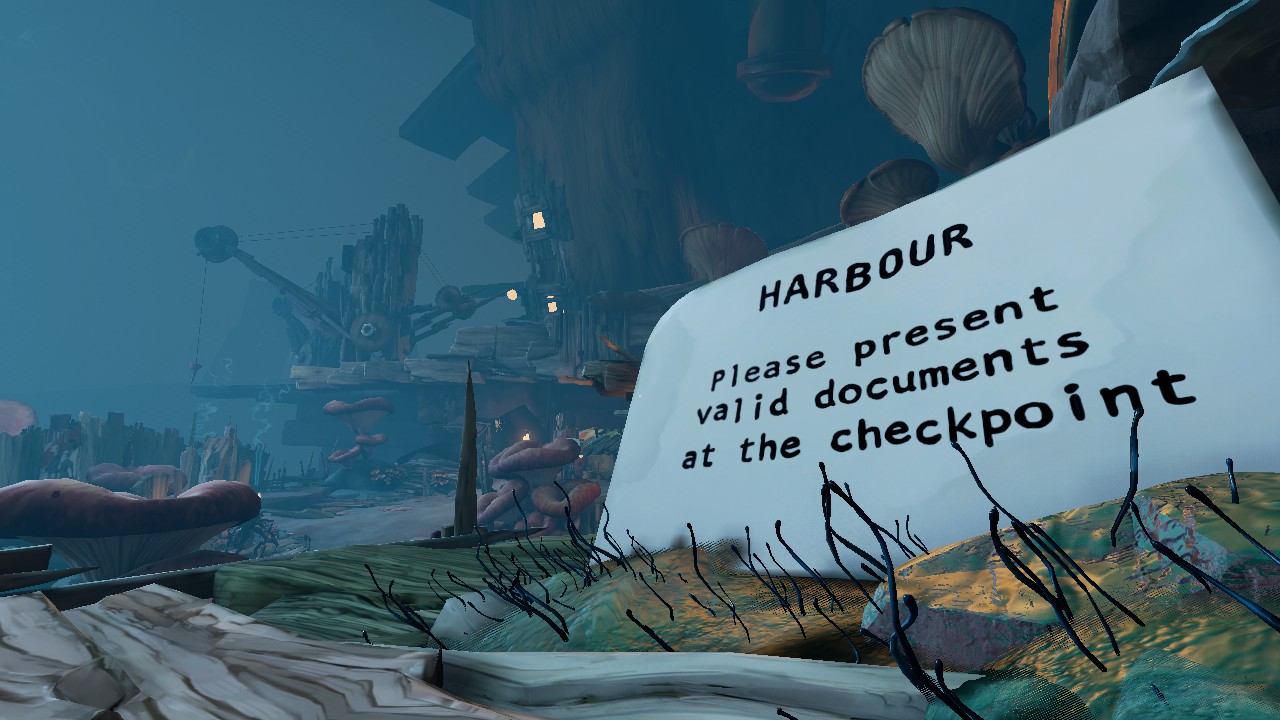 Some of the bugs are obstructive, but the game itself isn’t, beyond what’s needed to give you something to do.

It’s about time to wrap up and I’ve realised I haven’t really said anything bad about it. Well, there was a minor bug with a line of text repeating, and I had a couple of crashes. The humans are not amazingly animated either, but then they work better as muffled voices and sunlight-obscuring, dust-shaking footsteps from beneath the floorboards anyway. Metamorphosis is a colourful, surprisingly charming wee adventure, and I’d love to see what else this studio can do.

Metamorphosis is due out sometime this year on Steam and Green Man Gaming.

Tagged with All In! Games, feature, ovid works, preview, Metamorphosis.