As you may have seen already, the hillside lake shown on Minecraft‘s old title screen, which rotated slowly and blurrily between 2011 and 2018, has been located at last. The discovery of the world’s seed is a whole story in itself, about how a group of people managed to deduce a single location from among the 18,446,744,073,709,551,616 worlds possible in Minecraft. That’s about as many atoms as there are in a bee, for reference, making for a pretty daunting puzzle. But since the techniques used to solve it were so unspeakably clever that I could only understand them as literal sorcery, I am probably not the person to ham-fistedly relay that tale.

Instead, I thought I would make a pilgrimage to this fabled location by loading the 2011 beta build where it existed, generating a world with the sorcerers’ seed, and building a house by the side of that very lake. We’ve all seen the place hundreds of times, but I wanted to know what it was like to live there. The answer, as it would turn out, is “surprisingly difficult”. 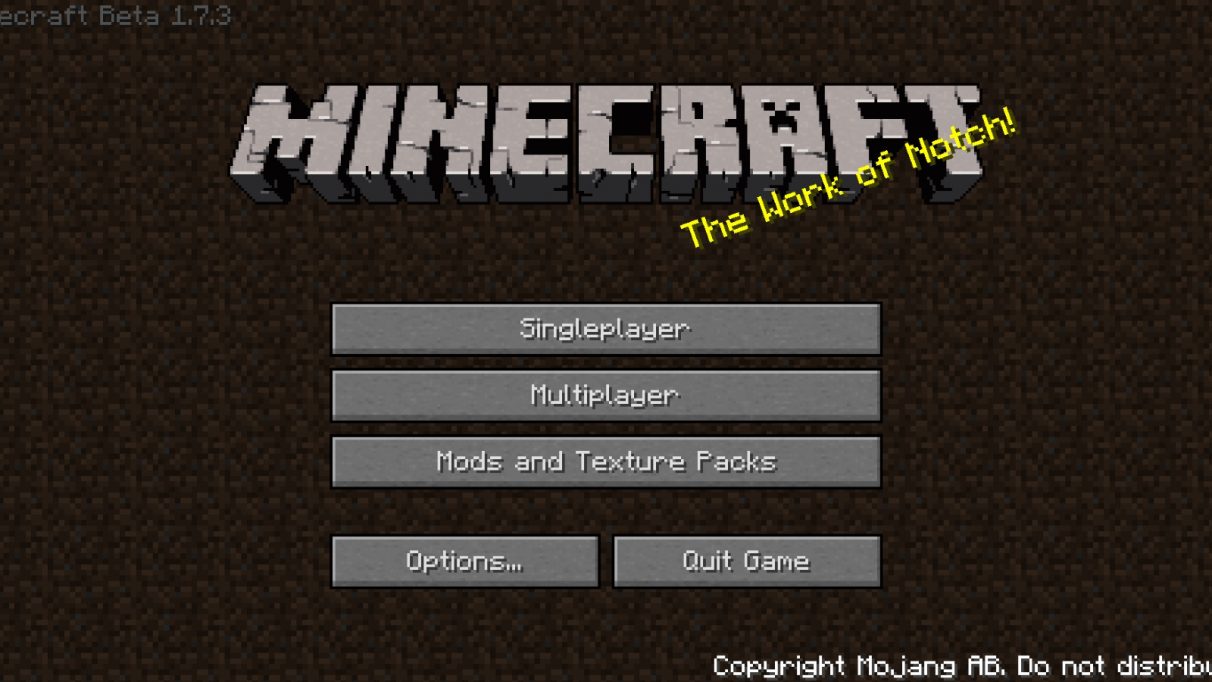 Yep, this image does a pretty artful job of showing just what can change in nine years.

Any good expedition needs parameters, so I set my rules before I embarked. From entering the world, I’d give myself three in-game days to find the location from the co-ordinates I’d written down, and build a home there with four walls, a door and a roof. I wouldn’t leave the area visible in the rotating panorama from the old title menu, I wouldn’t use creative mode (this turned out to be an easy rule to follow, as it didn’t exist in 1.7.3), and if I died, I’d delete the installation and never return. Having played Minecraft on and off for a decade, I figured that this all sounded like a pretty tame challenge.

But as Bane once famously mumbled, peace had cost me my strength. Spoiled by nine years of added features, and by spending the last year or so playing almost entirely as a non-violent, flying god in creative mode, I just wasn’t prepared for what a different experience it was to play Minecraft back in caveman times. For a start, because of there being no creative mode, I had to actually walk to the co-ordinates. “How… quaint”, I murmured, like a Roman Emperor being offered a wax statue of a dog’s cock by a gurning bumpkin, as I picked my way through a landscape made subtly alien by time. 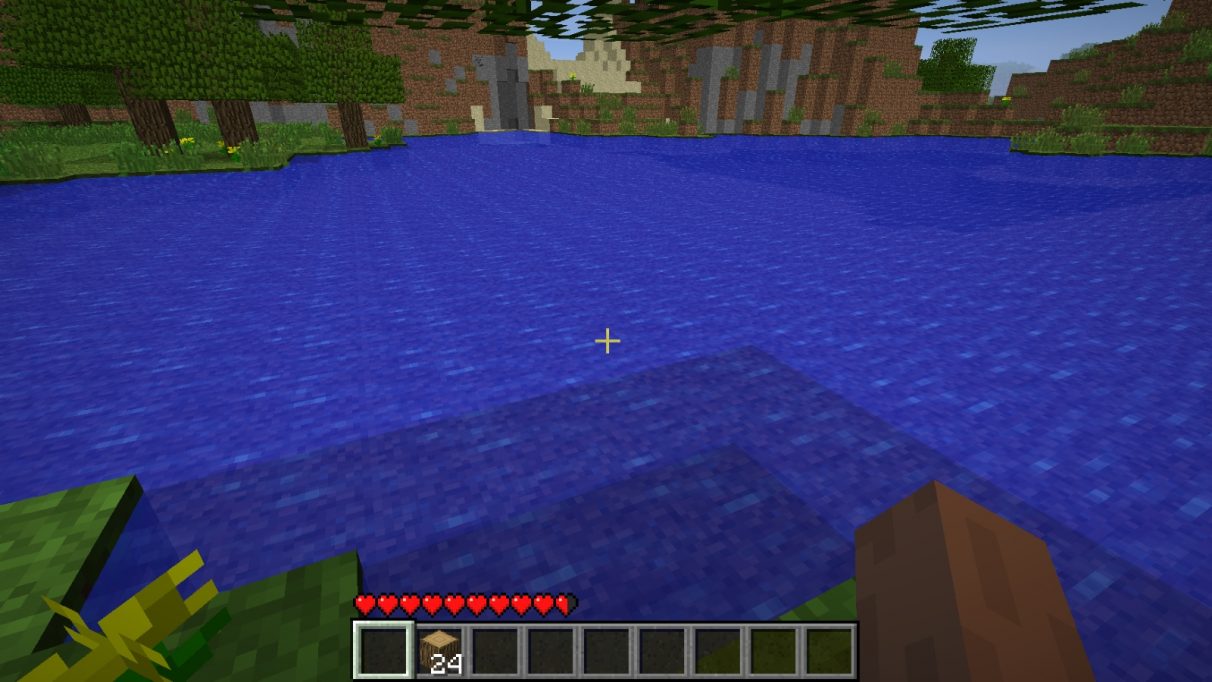 It’s the little things that really stuck out. In recent years, I’ve gotten really used to water being full of fish and pretty, animated pond weed, but these lakes seemed eerily barren – expanses of sterile dirt with just the occasional, miserable-looking squid living in them.

I reached the location specified, and frowned, as I appeared to be looking at a generic, nondescript bit of countryside. But after turning ninety degrees to look at a different bit of equally nondescript countryside, something clicked. Some buried process in my brain – no doubt evolved for something actually useful back in the hellish savannahs of the late Pleistocene – knew exactly where I was, even without having to bring up my reference image to check. I was on the Minecraft title screen. It looked exactly as it always had, preserved like a mosquito in amber made of congealed maths, and it looked exactly how it should. Apart from one thing. As I took in the view, a single black sheep waddled into view right at the centre of my vision, and evoked 2016 horror movie The Witch a little more than I felt comfortable with. 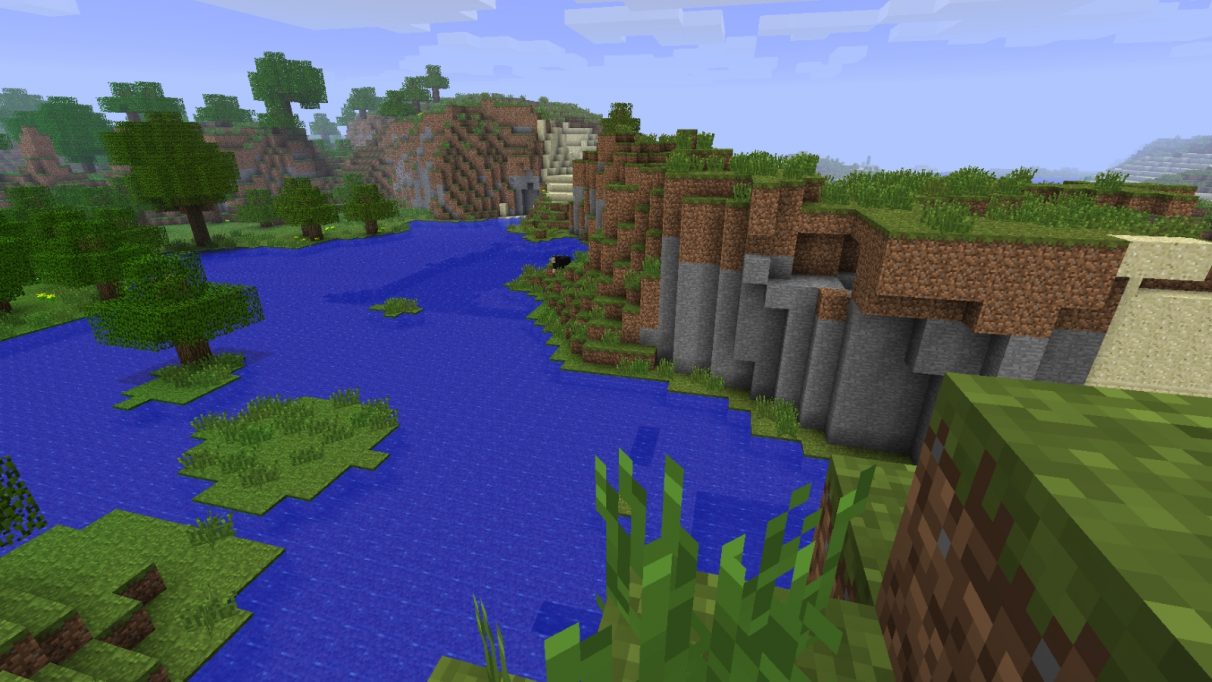 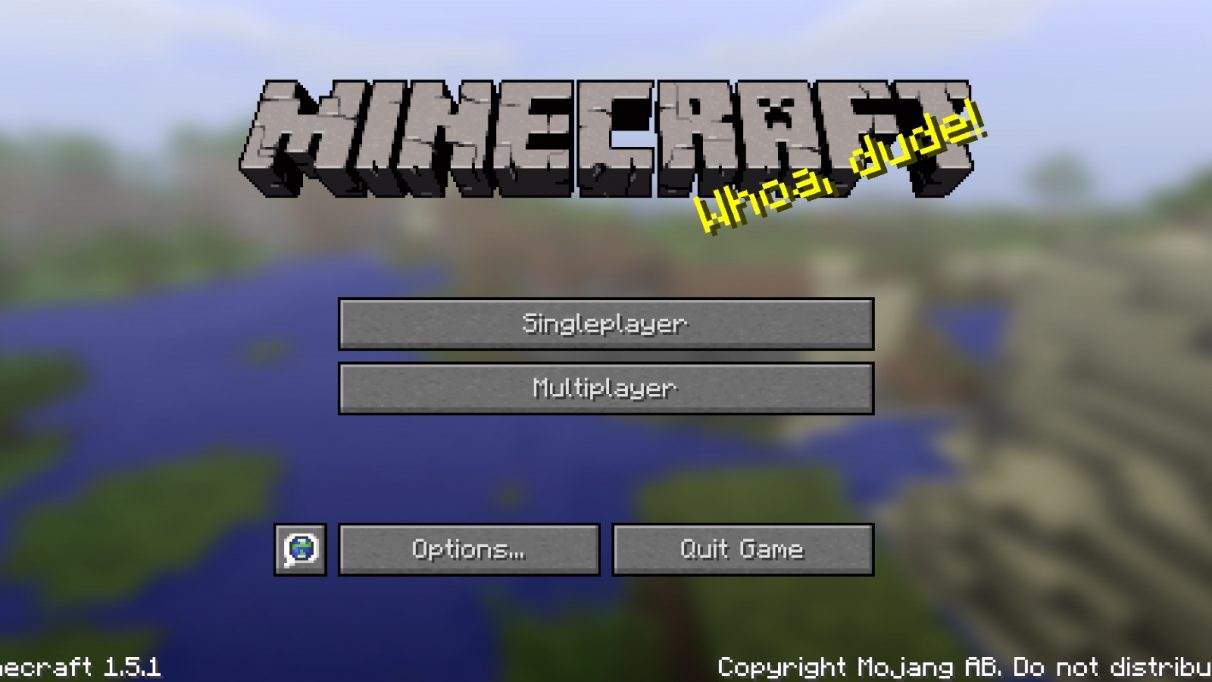 Here’s the old title screen, by the way, for comparison’s sake.

Still, there was no time to waste looking at devilish farm animals, as after burning half the day in finding the site and then gawking at it, I was running out of daylight. Deciding that ol’ Black Philip had been an omen showing me where to build, like the snake and the eagle at Tenochtitlan, I flattened out the little promontory where the sheep had manifested, and crossed the lake to engage in a Minecraft staple that’s been there since day one: punching trees. By the time evening fell on the valley like a brick, I had a good stack of oak logs, and made to hurriedly throw up my cabin walls so I could spend the dark hours working on the inside.

That was when I hit my first big limitation. 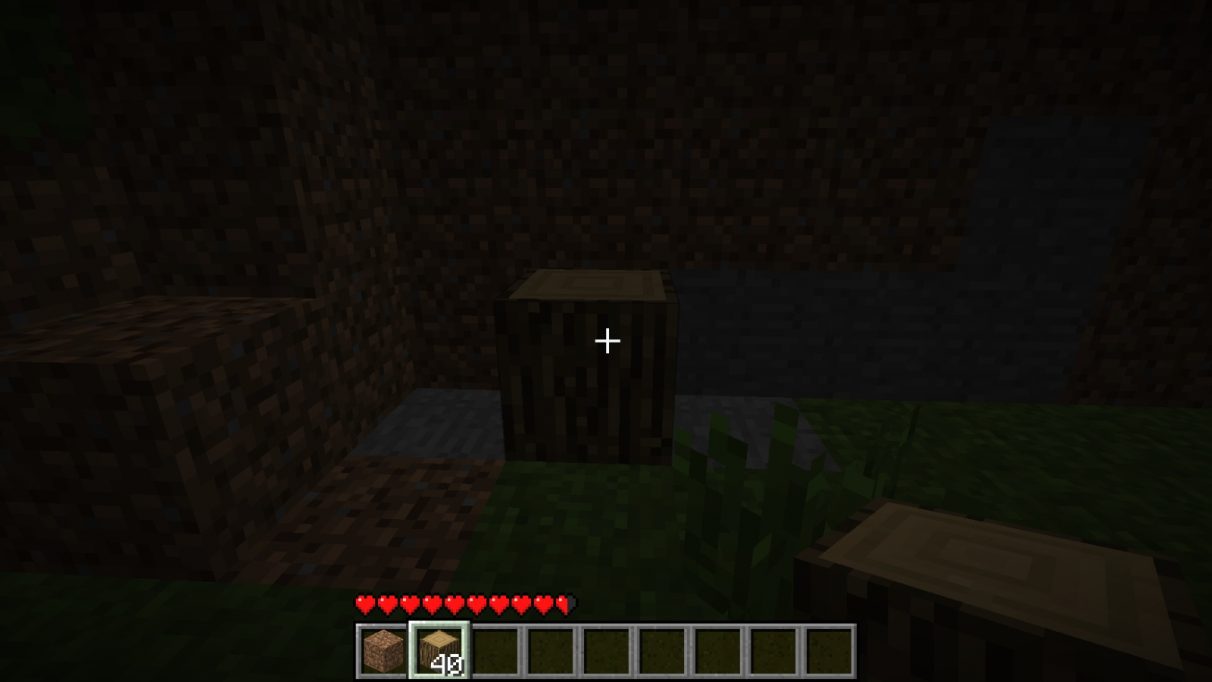 I’d forgotten that you couldn’t choose the alignment of log blocks in those days, so my plan to make pleasant, horizontal log walls was buggered. And with the lobotomised moans of zombies already filling the darkness, there was no time to come up with a plan B. So I followed the timeless first night playbook, and buried myself in a hole for the night. Soon after that, a storm started (weather had just been introduced to the game, after all) and continued all night as I dug a miserable, lightless cave with a wooden pickaxe. Since charcoal torches, ever the saviour of a coal-less first night, were still some way in the developmental future, I had to use a furnace as an impromptu lamp, wastefully burning wooden planks so I could see what I was doing. At last, in a stroke of Morisettian irony, I struck coal just as dawn broke. 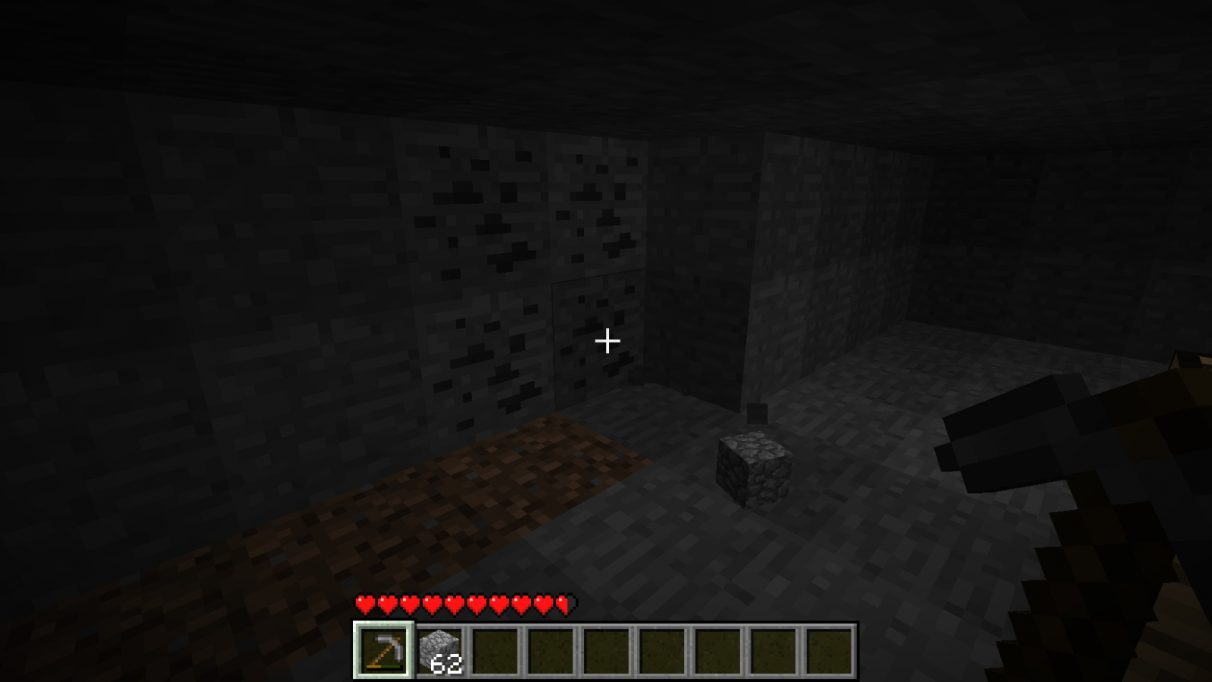 ♬ And who would’ve thought, it figurrrs ♬

The storm continued unabated through the day, and even though I knew the gloom would mean the horrors of the night-time would still be roaming above ground, I was nearly halfway through my allotted time, and so I had no choice but to break free from my cowardice hole and brave the world. Immediately, I was assaulted by a skeleton. 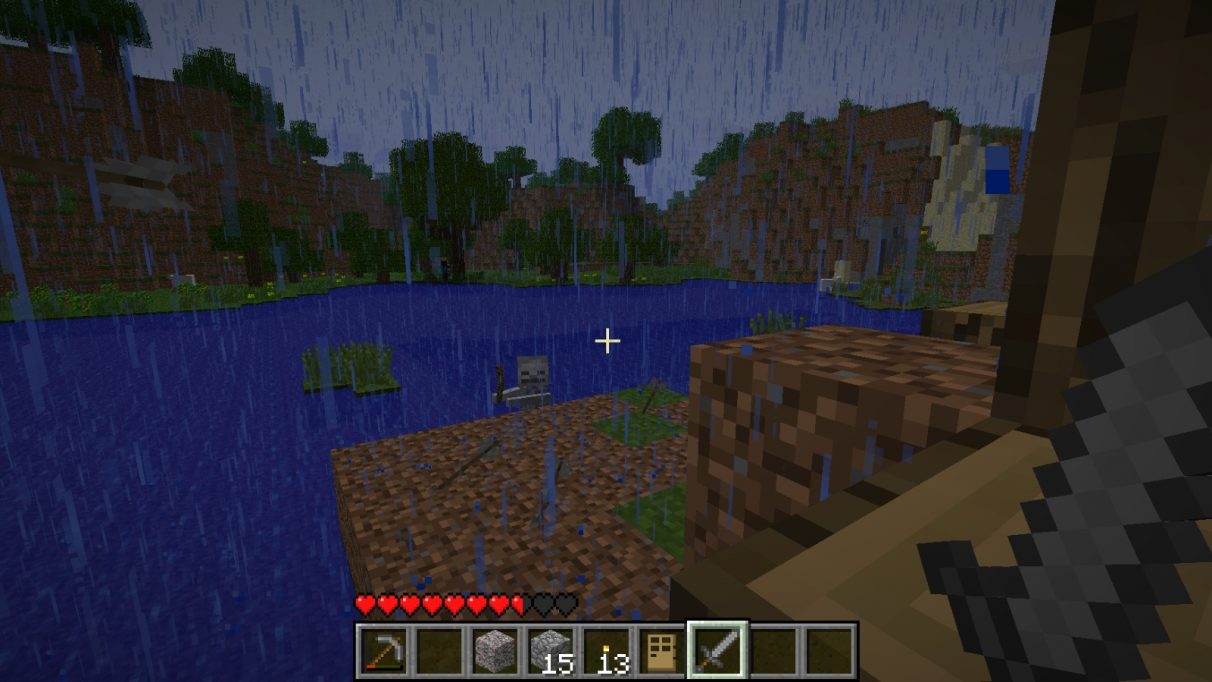 I only survived getting jumped because things were so much easier to kill prior to the awkward sword-swing-timing mechanic introduced in Minecraft’s combat update. Even so, I’d been narrowed down to my last couple of hearts, to the point where even a minor fall might now spell the end of me. Forced to delay the construction of my walls even further, I had to go in search of food.

Black Philip, as the nearest animal to hand, was first for the chop. But alas, he had no chops for my thirst, as sheep just dropped wool in those days. With fish not having been invented yet, I sprinted off in search of a cow I saw on the horizon, but it did not drop any beef. Nor did the next cow, or the next, or the zombie that nearly ended my life as it blundered out from behind a tree in the middle of my hunt. The whole herd had not a single burger between them, and I began to remember just how few sources of food there used to be. There was nothing for it: I was going to have to punch loads of grass until I found some seeds, and build a panic farm. 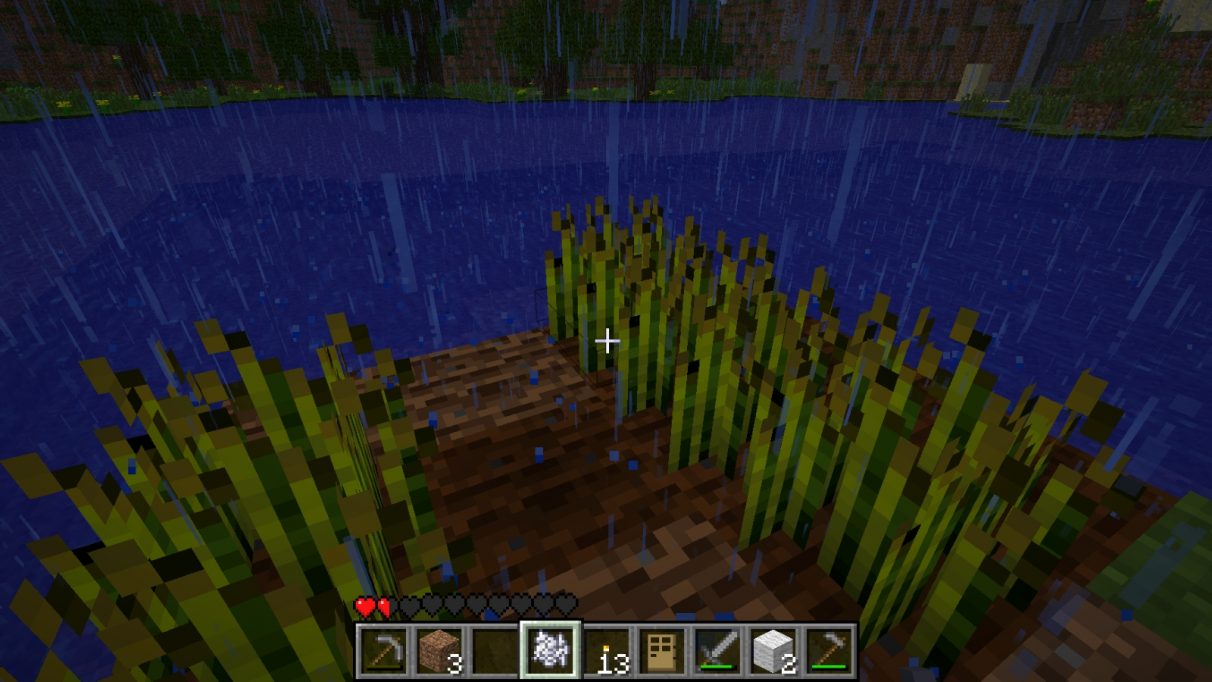 Silver linings: the skeleton’s bones produced bonemeal so I could force-grow enough wheat to make a single loaf of bread straight away. Sure, it was fertilised with the ground remains of what was presumably a human, but needs must when the devil visits you as a sheep.

Kept from the edge of death by the single loaf I bullied from God’s hands, I had just enough time left in the day to grab a bit more wood, a bit of sand for forging glass windows, and a bit of iron that I saw exposed on the other shore of the lake. Then, without a single block of wall laid, I was forced to scurry back underground as night fell once more. At least the rain had stopped, though, and that iron allowed me to smith myself an iron hat and a sword, which made me feel a little safer.

They also saved my life. Since it was quiet out, I decided to risk sneaking out of my hole to do a bit of night carpentry. But as soon as I got to work, I heard what sounded like a man aggressively drinking a milkshake right behind me, and all of a sudden a spider was right in my face. I ran downstairs and poked it to death from six feet away, then spent the rest of the night battling the stream of monsters that came after it. 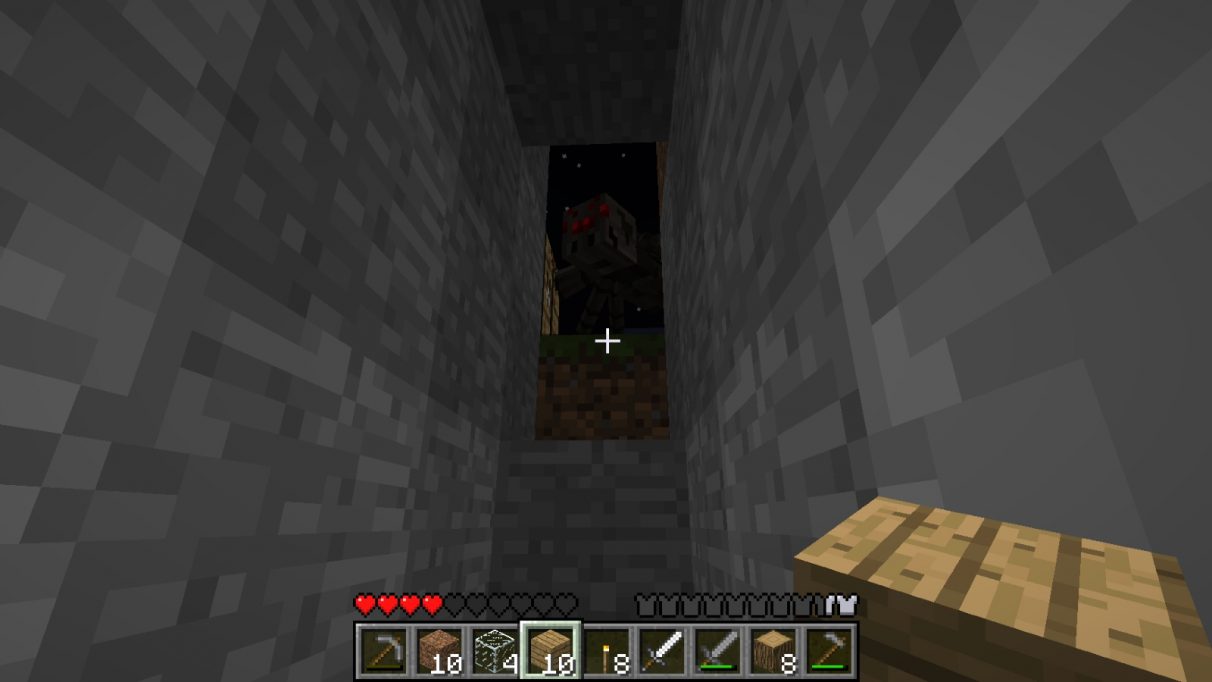 I fucking hate the spider noise.

When day three, my final day, began, the rain had stopped at last. But a grim surprise awaited me. 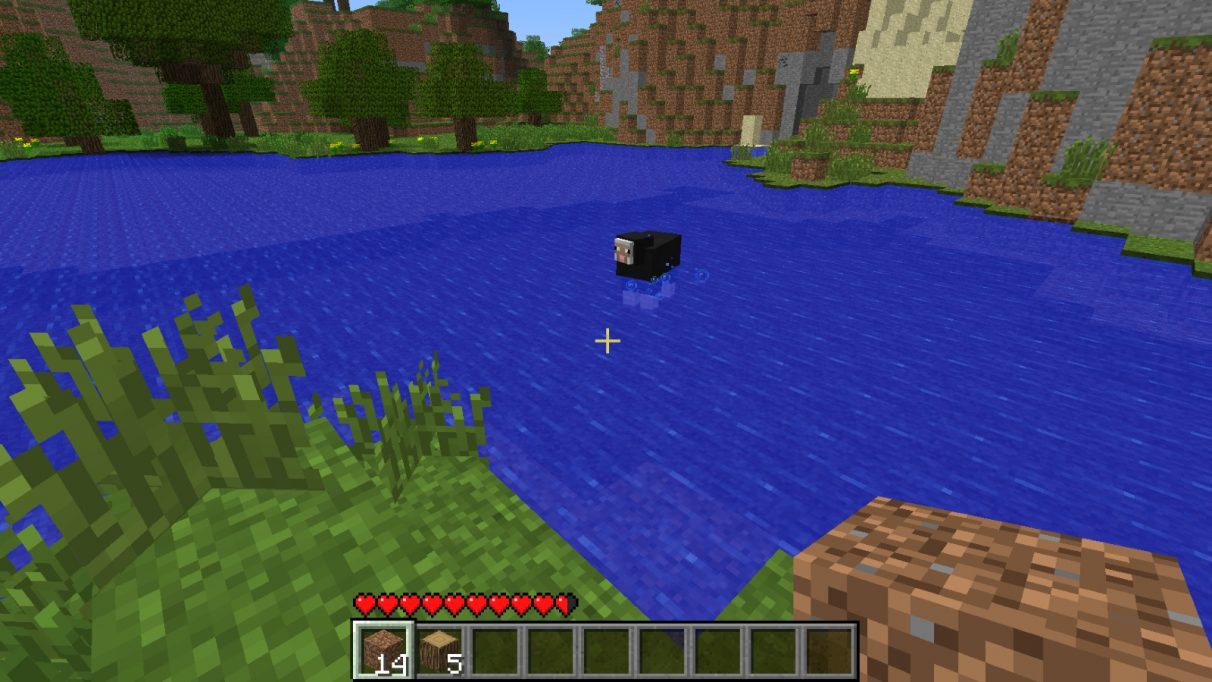 This arsehole was back again, and he’d spent the whole night bouncing up and down on my crops so they had all burst. There would be no more bread for me. Cheers, the Devil. I couldn’t even build a bloody fence to stop him, as it was one of the dozens of crafting recipes that just didn’t exist in 2011. But no matter, this was my last day in any case. And since the weather was fine, I got straight to the task of throwing up the walls of a quick, dirty house. By the time the sun was setting, I was putting the last blocks on the roof, and as I climbed back up to my original vantage point, I reflected on the fact it had taken me well over half an hour to put up the most goddamned basic 9×5 house I’d built in years. 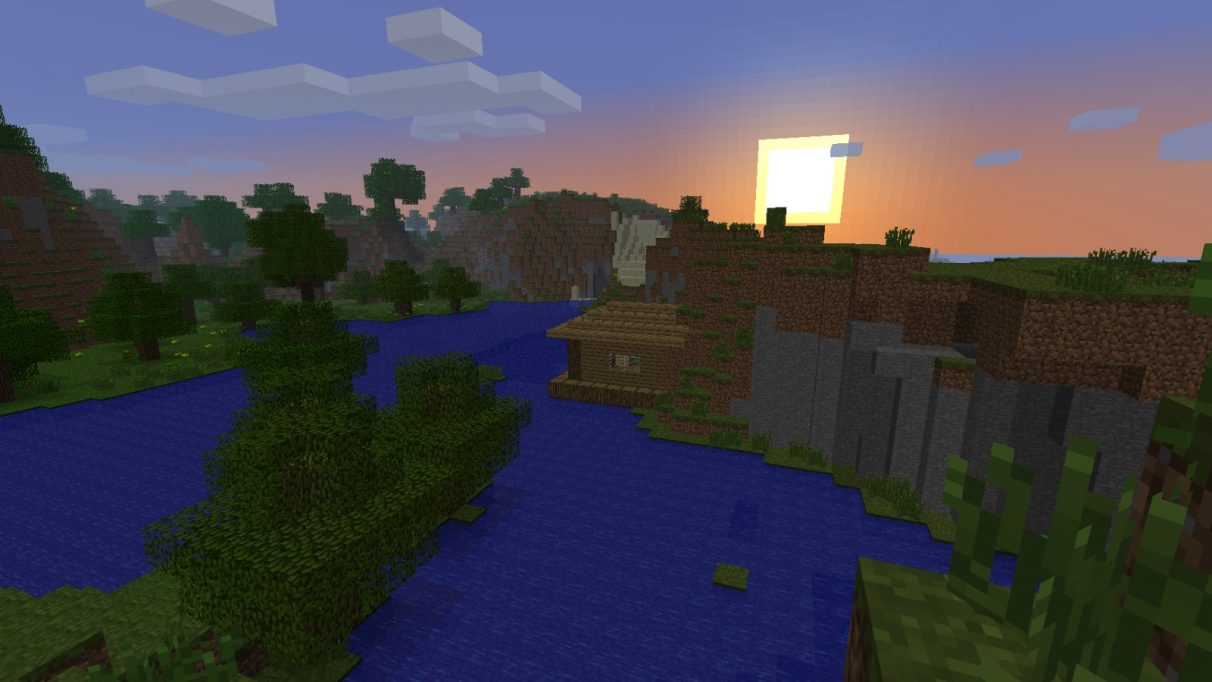 Revisiting 2011’s Minecraft was a stranger experience than I expected it to be. I distinctly remember the thrill of the game back then being the feeling that you could do anything, and it seemed there were no end to the possibilities. But that list of possibilities kept growing and growing. Now, played in hindsight after nine years of willing feature creep, early Minecraft is an experience defined by everything you can’t do. Food is scarce, decoration options are slim, and night is brutal. Much like a paleolithic forager, you spend so much of your waking life struggling with the basic necessities of not becoming dead, at least in the early game, that any time left spare to devote to aesthetics feels like an astonishing luxury.

Minecraft was a more stressful experience in 2011, for sure. Certainly, it was way more limited as a construction toy. But part of me can’t help but think it was a better game.